In climate-stressed Singapore, the future is super low energy buildings

Spray-on solar panels, smart aircon, and heat-reflective paint will be part of a plan to reduce the energy consumption of the tropical city-state's built environment with a new building standard.

As part of a national plan to lower carbon emissions and fight climate change, Singapore has introduced a new standard to produce “super low energy” buildings.

The tropical city-state wants office buildings to lower their energy use to 60 per cent of 2005 levels, with smart airconditioning, cool paint and natural ventilation some of the ways the construction industry has been tasked to meet the new standard, known as the Green Mark for Super Low Energy (SLE).

The SLE programme, developed by the Building and Construction Authority, was announced by the Minister for National Development Lawrence Wong on Wednesday at the International Green Building Conference on the first day of Singapore Green Building Week.

As a tropical country, cooling is the biggest source of energy consumption in our buildings.

“This will recognise developers and owners for achieving high SLE building standards. I hope that this will incentivise more building owners to come on board,” Wong said in his keynote address to a 12,000-strong audience of construction industry professionals, policy makers and end-users.

Also part of the programme will be the SLE Challenge which invites building developers to take the lead in making highly efficient buildings through innovative designs and cost-effective technologies.

Wong said that more than 10 developers and building owners have already pledged their commitment to achieve at least one SLE project over the next five years.

One of them is the Defence Science and Technology Agency (DSTA), which has worked with the army to achieve a high standard of energy efficiency for building facilities in its Kranji and Seletar Camps.

In the camps, solar light pipes are used to channel sunlight into the building facilities, while sensors are used to automatically lower artificial lighting levels when there is sufficient sunlight. Solar panels are installed on the roofs of both buildings to convert sunlight to electricity, generating sufficient energy to meet all their requirements.

The two army buildings will save close to 540 MW of electricity a year – which is equivalent to the annual electricity consumption of about 116 four-room public housing flats in Singapore.

The minister also highlighted the programme’s SLE Buildings Technology Roadmap to help buildings achieve up to 80 per cent energy efficiency by encouraging the building sector to develop innovative solutions.

One such project is by property developer Keppel Land, which wants to convert Keppel Bay Tower, a Green Mark Platinum building—the highest grade of green building in Singapore—into a super low energy building. 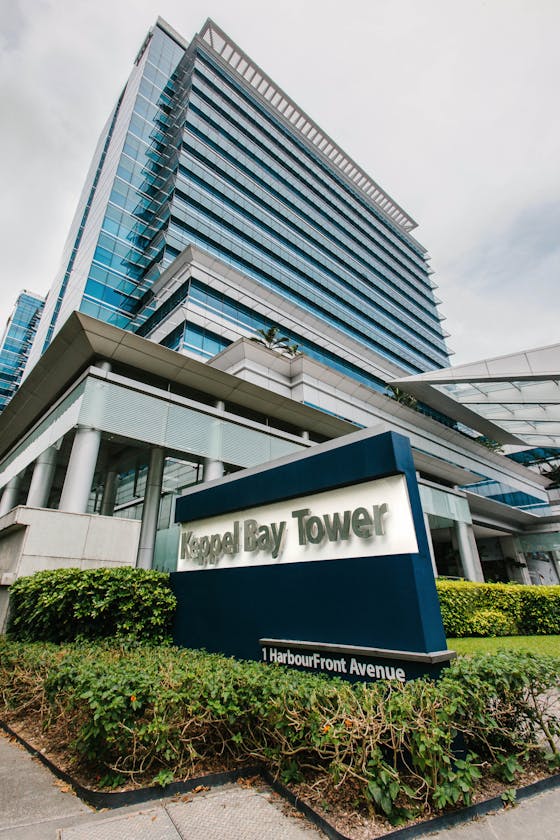 Wong, who is also Singapore’s second minister for finance said that buildings, which account for about a quarter of Singapore’s carbon emissions, were key for Singapore meeting its national target to cut carbon emissions intensity by 36 per cent from 2005 levels.

“As a tropical country, cooling is the biggest source of energy consumption in our buildings. So solving the cooling problem is key to meeting our sustainability targets,” Wong said.

One method for greening buildings is passive design, which he said can minimise heat entry and reduce the energy needed for cooling by up to 12 per cent. This can be done by orienting building entrances away from direct sunlight, coating exteriors with cool paints and  heat reflective materials, and designing for natural ventilation.

Another method is the use of active design to improve the efficiency of air conditioning. He highlighted a system developed by researchers at National University of Singapore early this year of the world’s first prototype for a non-compressor air-con system, which uses water to cool the surrounding air. It is 20 per cent cheaper to manufacture, consumes 40 per cent less energy, and does not use harmful refrigerants that contribute to global warming.

Singapore’s first post-independence prime minister Lee Kuan Yew said that airconditioning was the greatest invention of the 20th century, Wong noted. “While it is a great invention, it uses a lot of energy and is based on technology that was invented last century,” he said.

Lastly, he cited enhanced solar technologies as key to cool and green Singapore’s buildings, noting how the island state receives about 50 per cent more solar radiation than temperate countries.

While admitting that land scarcity limits the available space for solar panel installation, Wong said that Singapore will still maintain its target to have over 2,400 public residential buildings fitted with solar panels by 2020.

Vertical solar panels will be used as they tap on previously unused space, such as the sides of high-rise buildings and are less likely to accumulate dust. Although still in the research stage, Perovskite solar cells are also being looked into as they are flexible and easy to produce, and can be painted or sprayed onto a surface.

Air-conditioning, once hailed by the late prime minister Lee Kuan Yew as the greatest invention of the 20th century, threatens to compromise the wealthy city-state’s comfortable way of life. Are there better ways to cool the tropical metropolis?
Air-con addicted Singapore seeks new ways to escape urban heat trap