Walking the 3,000-kilometre Te Araroa trail should have been the adventure of a lifetime. However, hikers on the Ninety Mile Beach were dismayed to find more than 200 dead birds on the shore. The little blue penguin (Eudyptula minor), also known by the indigenous Maori people as a kororā, was among the greatest casualties.

The hikers’ experience was not an isolated one. On May 2, 20 little blue penguins were found dead on Tokerau Beach. Ten days later, more than a hundred kororā were found dead by the residents of Cable Bay.

Usually standing at only 30cm tall and weighing no more than 1.5kg, the kororā is the world’s smallest penguin. The species is endemic to New Zealand, and colonies can be found on most of the country’s coastline.

Mass kororā deaths used to occur once every decade due to naturally occurring temperature fluctuations, but scientists fear they are now happening more frequently. As a result, little blue penguin populations have been declining, and they have been labelled “at risk” by the Department of Conservation (DoC).

Investigations by the DoC on seven of the dead Tokerau Beach kororā reveal that the penguins had either starved or frozen to death.

“According to the necropsy performed by the Ministry of Primary Industries (MPI), the birds showed signs of starvation and hypothermia. There was no blubber to keep them warm in the water, and their gastrointestinal tracts were empty. The deaths [of the 90 Mile Beach kororā] are also related to this starvation event,” announced Meirene Hardy-Birch, operations manager of DoC Kaitaia.

General public awareness about them is strong. They seem to capture the public’s attention in ways few other seabirds have.

Scientists say the kororā deaths were largely due to the La Niña weather phenomenon. The prevailing northeasterly winds have pushed the warm, tropical Pacific Ocean waters to New Zealand’s shores. This combined with rising sea temperatures due to global warming has resulted in the country’s strongest marine heatwave in 40 years, causing fish to move either deeper or further south where water temperatures are cooler. While this has been beneficial for more southerly kororā populations, colonies located in New Zealand’s northernmost coasts have seen devastating losses.

Graeme Taylor, principal science advisor for the DoC pointed out that the kororā’s limited mobility makes them especially vulnerable to such unfavourable conditions.

“[Kororās] don’t usually venture into deep waters. They can usually be found in rivers, estuaries and oceans no further than 30 - 50km off the coast. Our trackers also show they rarely dive deeper than 20 - 30m into the water. Their ability to disperse from breeding sites is further limited by their flightlessness. If there’s no fish nearby, they will suffer,” he explained.

Taylor also added that the kororā’s small size made them more vulnerable to the prevailing conditions as they are unable to hold the oxygen necessary for deep dives, where there may be more plentiful fish. Moreover, unlike emperor penguins for example, kororās cannot retain sufficient energy for long swims, or sufficient fat to avoid starvation.

Many kororās have been killed after being entangled in set-nets used by recreational fishermen. While line-fishing is more popular today, overfishing is still a major problem as it greatly reduces the amount of food available for the kororā.

Predation has also been a significant issue in kororā conservation. On the mainland, northern kororā populations have mostly disappeared as they often fall prey to pets and pests introduced by humans. Though many kororā colonies remain on New Zealand’s offshore islands, they are also threatened by infrastructure development, such as the ongoing construction of the Kennedy Point Marina (KPM) on Waiheke Island.

Scientists, activists and indigenous groups argue that the marina’s construction will negatively affect the island’s kororā population. KPM representatives have denied these claims, stating that work has been deliberately scheduled outside the breeding season to minimise disruption.

“[KPM] is using a narrow definition of “breeding season”. [They think it just means] the time when there are eggs or chicks in the kororā nest. However, breeding activities also include pair formation, bonding, mating, nestbuilding, nest defence, egg laying, incubation and the feeding of young. The developers are therefore not correct to say that work is being scheduled outside the breeding season. Construction activity noise is likely to disturb them as well,” Cockrem explained. 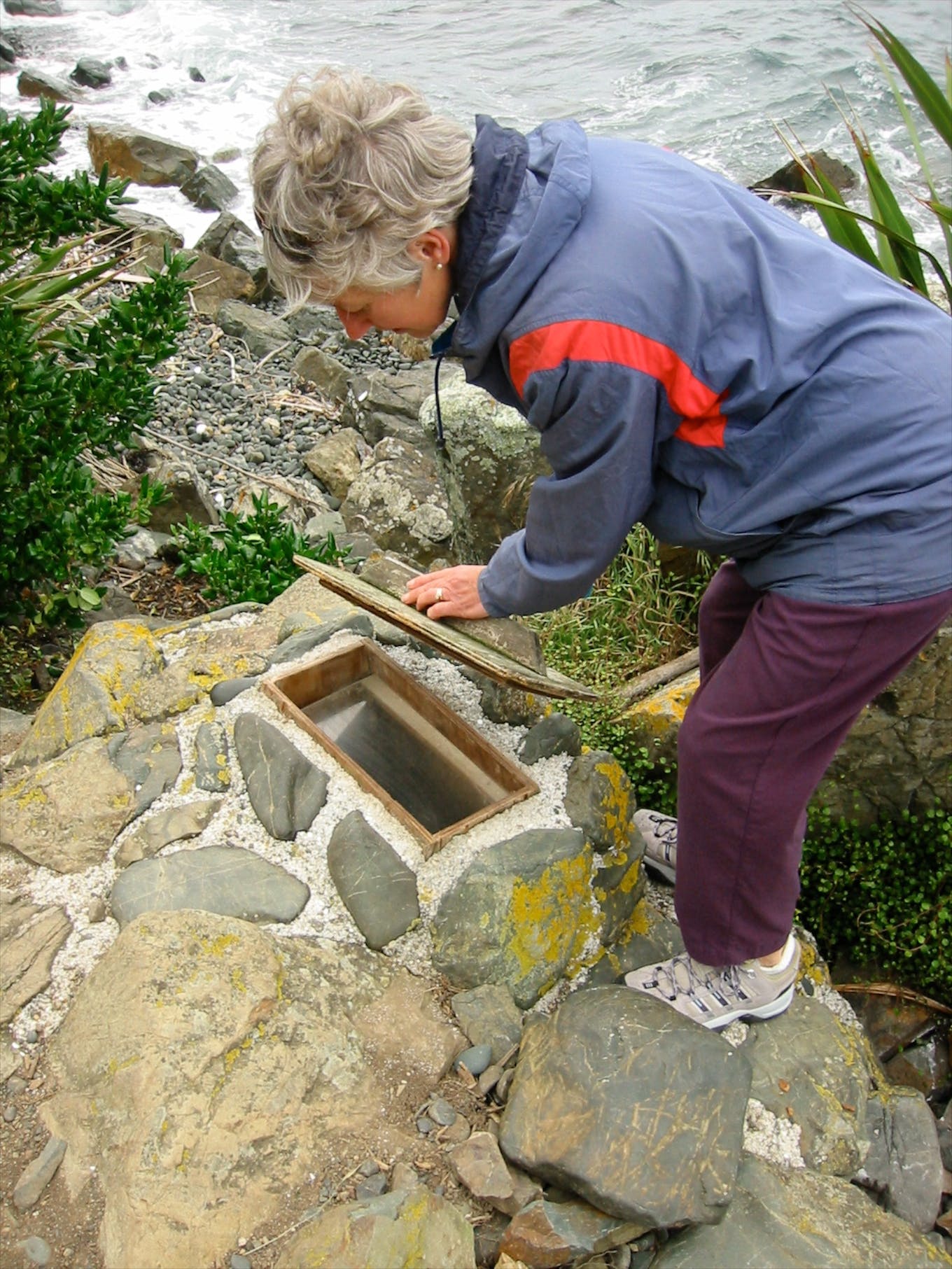 A volunteer inspects a nest box placed on Tiritiri Matangi Island in the Auckland region. Image: Jon Sullivan via Flickr

There have been concerted efforts to protect kororā. For example, many nest boxes have been strategically placed in prominent breeding locations to not only better protect their eggs, but also prevent adult penguins from having to cross roads. But there is only so much nest boxes can do, and scientists say stronger regulations will secure a better future for the little blue penguin.

Cockrem urged: “Local [authorities] need to better regulate the presence of dogs on coastlines where kororā nest, as this will reduce and ideally stop unnecessary deaths. Separately, coastline developments for recreational facilities which adversely affect penguins and the environment should not continue in New Zealand.”

Apart from being one of the only three penguin species which breed on the mainland, the little blue penguin also holds great cultural significance for the New Zealand people, and provides crucial income to businesses located in places with few other employment opportunities like the small town of Oamaru in the South Island.

“Rather than just driving past the town, tourists stay overnight to see the penguins. They stay in local accomodation and go to local restaurants. So there’s definitely a monetary benefit from having penguins in your area. [Kororā] are also culturally important to the Maori, who have had a long association with them. General public awareness of them is also strong. They seem to capture the public’s attention in ways few other seabirds have,” Taylor explained.