Human actions are leaving their mark on the world’s protected areas, study finds

According to recent research, about one-third of the world’s total protected areas, which are critical to fighting extinction, are substantially degraded due to human intervention.

Roads, ranches, mines and cities are spilling into many of the world’s parks, reserves and wilderness sanctuaries, leaving one-third of the world’s total protected area — almost three and a half times the size of Alaska — with the scars of heavy degradation.

That’s one of the conclusions in a new study by ecologist James Watson and his colleagues, published May 17 in the journal Science.

“What we’re showing is at least one-third of the protected area estate is relatively worthless,” Watson, with the Wildlife Conservation Society (WCS) and the University of Queensland in Brisbane, Australia, said in an interview.

Scientists know that protected areas form a critical line of defense against the extinction of species. That’s led governments around the world to set aside nearly 15 per cent of the Earth’s surface for conservation, doubling the area of protected land since the adoption of the Convention on Biological Diversity at a 1992 summit in Rio de Janeiro. The conservation community has applauded these gains, arguing that the world is on track to meet the goal of protecting 17 per cent of the planet’s land by 2020, one of the Aichi Biodiversity Targets set in Japan in 2010.

But in Watson’s fieldwork around the globe, he has noticed that many of these protected areas aren’t “giving biodiversity a break from humanity” as intended, he said.

“I saw many, many protected areas just getting smashed,” he said.

We can’t just go and save everything everywhere. That’s not going to work.

So he and his colleagues set out to look at the problem on a global scale. They examined a subset of the more than 200,000 protected areas around the world, comparing the boundaries with “Human Footprint” maps. These maps chart out the extent of human impact with information on variables such as the locations of roads, farms and population centers.

The team found that parks and reserves held to the most robust standards are doing significantly better than those with laxer controls. He pointed to Niassa National Reserve in Mozambique, Keo Seima Wildlife Sanctuary in Cambodia, and Madidi National Park in Bolivia as places where governments are working with NGOs like WCS to keep wild spaces relatively pristine.

Often, these influences are most pronounced in areas of the developing world with growing human populations. But even in Watson’s native Australia, human impacts have infiltrated conservation sanctuaries: A mining company is currently extracting uranium from Kakadu National Park, Watson said. And on Barrow Island Nature Reserve, replete with endemic species and described as Australia’s Galapagos, Chevron has tapped into stores of oil and natural gas. 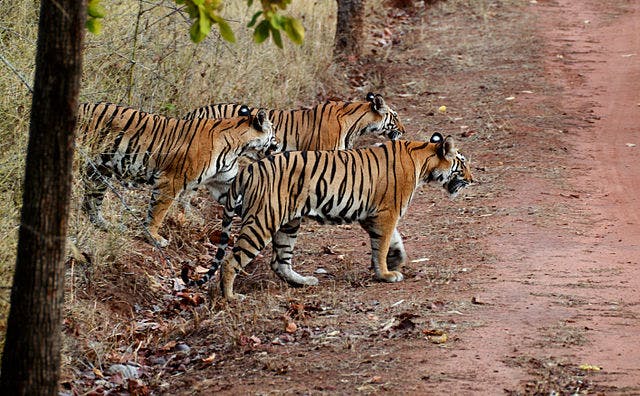 Threatened by industrial or urban expansion, many species located within protected areas continue to suffer. The researchers found that large parks and reserves held to the toughest standards are doing significantly better than those with laxer controls. Image: Brian Gratwicke, CC BY 2.0 via Wikimedia Commons

By some estimates, the consequences of human presence could trigger the extinction of as many as half the species on Earth in the next 50 years, Watson said.

“That is not just sad for those species,” he said. “That’s going to have massive implications for humanity in terms of the degradation of ecosystems and the services they provide,” particularly for the world’s poorest people who depend heavily on those ecosystem services.

Initiatives to protect large swaths of the planet for nature, such as Nature Needs Half and Half Earth, are “powerful and ambitious and really brave,” Watson said. But he said he was also concerned that these calls might lead some countries to misrepresent the size of their territory devoted to conservation, as this study shows that some protected areas lack the effective enforcement and monitoring required to preserve habitats for biodiversity.

“That’s probably a bad thing for conservation,” Watson said. “I’d rather have a very honest assessment of how much area in nature is safeguarded and doing a good job.”

Developing that sort of assessment is what he and his colleagues are trying to do. They can then use that analysis to pinpoint spots where investments in stepped-up enforcement of protective laws and increased monitoring could pay off: areas with high species diversity, for example, or that are refuges for threatened wildlife.

“We need to start [to] actually identify those jewels in the crown [that] are protected areas and fund and enforce them,” Watson said, adding that this sort of analysis would help define areas that should be priorities for limited funds.

“We can’t just go and save everything everywhere,” he added. “That’s not going to work.”