How to go gentle on your 'revenge travel'

It is travel season again, but business-as-usual won’t cut it amid a climate emergency. This Earth Day, Eco-Business looks at ways tourists can lighten their environmental footprints and support local communities.

The Omicron Covid-19 wave is receding, summer is approaching, and people are packing for overseas trips after hunkering down for a good two years.

For many in the globe-trotting, middle classes of the world, it is almost back to the good old times. But that good old time is also a brewing sustainability disaster.

Tourism generated about a tenth of carbon emissions worldwide in 2019. Hotels, which dot the world sparsely but guzzle huge amounts of resources, will need to reduce emissions by 90 per cent by 2050 to be in line with keeping global warming to 2 degrees Celsius, according to industry group Sustainable Hospitality Alliance. They currently contribute to 1 per cent of global emissions.

While tourism forms the backbone of many countries’ economies, infrastructure development and labour exploitation have also hurt local communities.

This Earth Day, Eco-Business looks at how travellers can minimise collateral damage to people and the environment while planning their great escapades.

Sweden is the most sustainable travel destination, according to London-based market research firm Euromonitor International. European countries took the top 21 spots out of 99 studied countries, when ranked according to criteria such as how much energy hotels use, visitor numbers and social metrics of the local population.

The next three spots went to Bolivia in South America, New Zealand in the Oceania region and Canada in North America. The top East Asian destination is Laos at 51st place, while the top African contender is Cameroon at 52nd.

Green Destinations, a group promoting sustainable travel, also lists sites in Finland, Chile and Niue as top attractions. These destinations applied for Green Destinations’ annual award, and were judged based on how they uphold local culture and manage their environmental impacts.

“Travellers nowadays are more attuned to sustainable destinations and accommodations,” said Susan Santos de Cárdenas, the Southeast Asia partner and representative for Green Destinations. “They want to leave the place better after visiting.”

But flying halfway across the world to visit these places might defeat the purpose, given the high carbon emissions of passenger jets. A shorter flight could be better, although per-kilometre emissions will be higher. A train ride is certainly less pollutive. 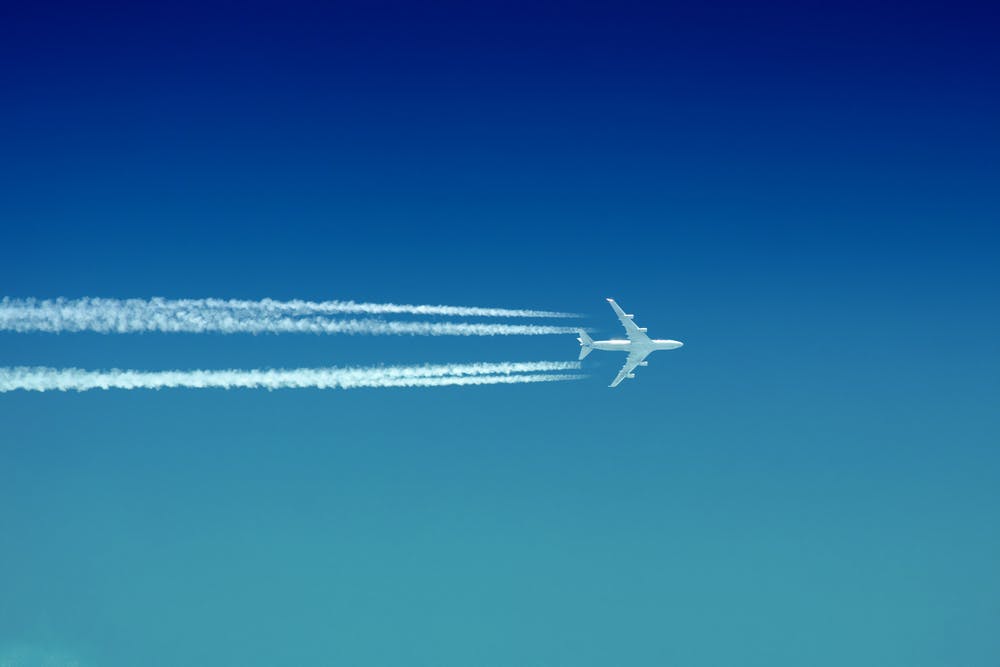 Flying is one of the most polluting ways to travel. Image: oriontrail / Shutterstock.com.

A trip from Singapore to Sydney creates just under US$10 of carbon emissions per passenger, according to Singapore Airlines, which gives travellers an option to make a carbon offset payment. The airline says proceeds go to protecting forests in Indonesia, building solar panels in India and other projects.

Other big carriers like British Airways and Delta also offer such programmes, but having the option straight at booking is still a rarity – only 30 out of 290 IATA members provide the service. Some independent groups, like German non-profit Atmosfair and Zurich-based Myclimate, offer similar schemes.

But paying for emissions is far from a fix-all. While the carbon offsetting market has grown in recent years, lax verification is still an issue, and past investigations worldwide have uncovered overstated credentials and missed environmental targets.

If the optional surcharge does not interest you, you are also not alone – only 4.5 per cent of passengers actually pay for carbon offsetting, according to a recent study. 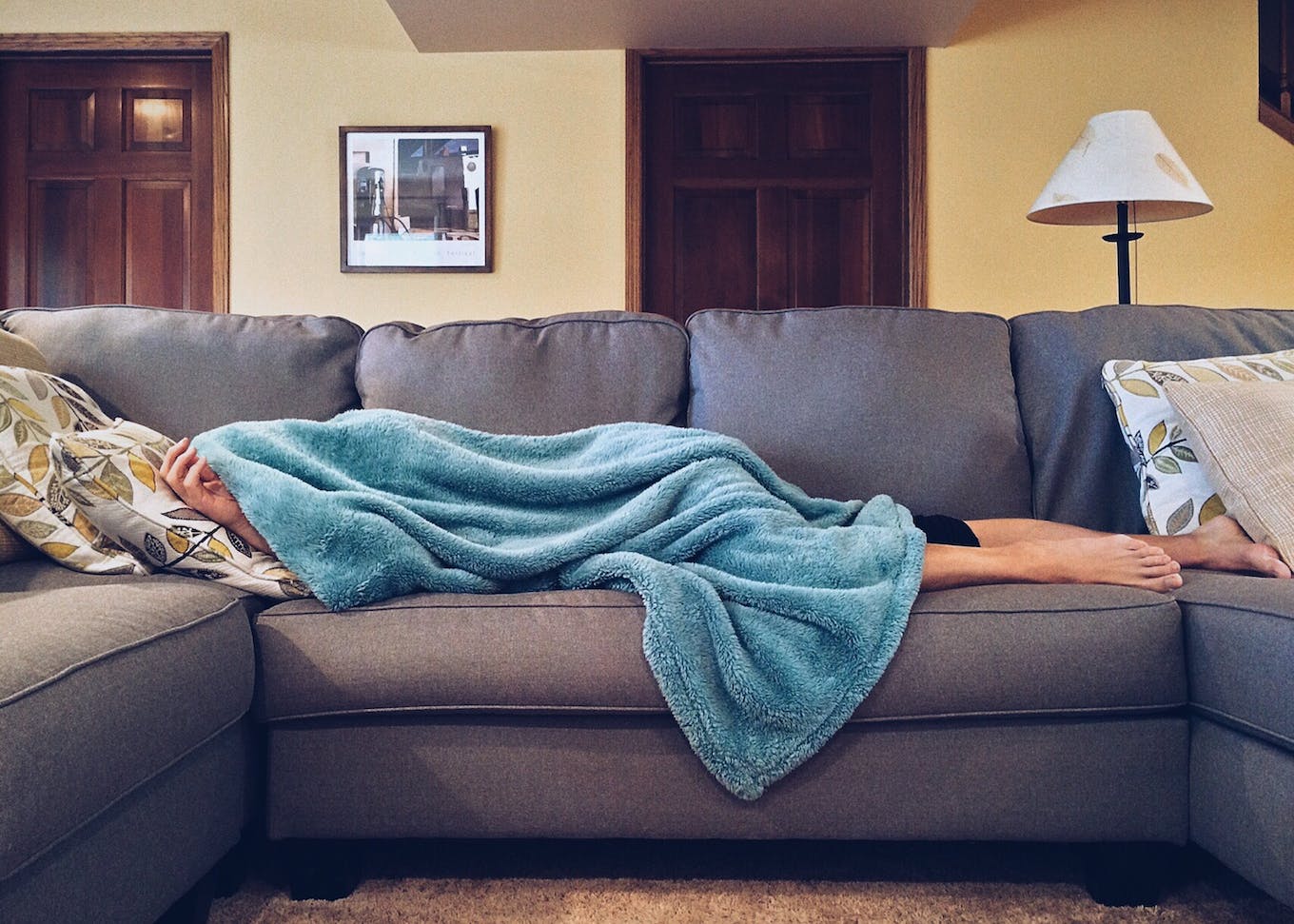 Beyond going for the barebones, choosing a sustainable option requires a fair bit of research. Image: PxHere.

Couchsurfing may be right up there in terms of resource efficiency, but it is certainly not everyone’s cup of tea.

Homestays, where travellers get a room or apartment instead of just a sofa, could be a hit-or-miss. AirBnB, one of the biggest players in the industry, says it facilitates resource sharing and waste reduction. However, research has also shown that AirBnB listings in Sydney, Australia emit the same amount of carbon as apartments in small hotels.

Then there is EcoBnB, which requires listings to have a slew of sustainability features, such as renewable energy and organic food. The platform is now one of the main reference points for sustainable tourism in Europe.

The full-service hotel industry is also facing a “corporate trend” to go green, according to Associate Professor Chang Tou Chuang, who studies tourism geography in the National University of Singapore. Major hotel groups are signing on to certification programmes to keep their resource use in check and promote their credentials.

“Hotels are jumping onto the sustainability bandwagon,” Chang said.

But it might be early days to walk into any property and expect best practices. Clara Lee, 26, a broadcast journalist who went on her first overseas holiday in Langkawi, Malaysia last month, said she did not notice her hotel going out of the way for sustainability.

“They were quite generous with plastic bottles and free-flow napkins. I didn’t really see a lot of recycled materials,” said Lee.

“It would be good to do research on green practices of lodgings, whether they do their part in eco-friendly ways,” advised de Cárdenas, for travellers looking to minimise their environmental footprint.

“Pick a travel operator and hotel that has sustainability as their core value. For example, pick hotels that do not provide disposable items or that have a value statement on how their development minimises impact on the environment,” advised Sim Cher Huey, founder of Kayakasia, which offers paddleboat tours in Southeast Asia. “These hotels and operators may be more expensive but they do things right.” 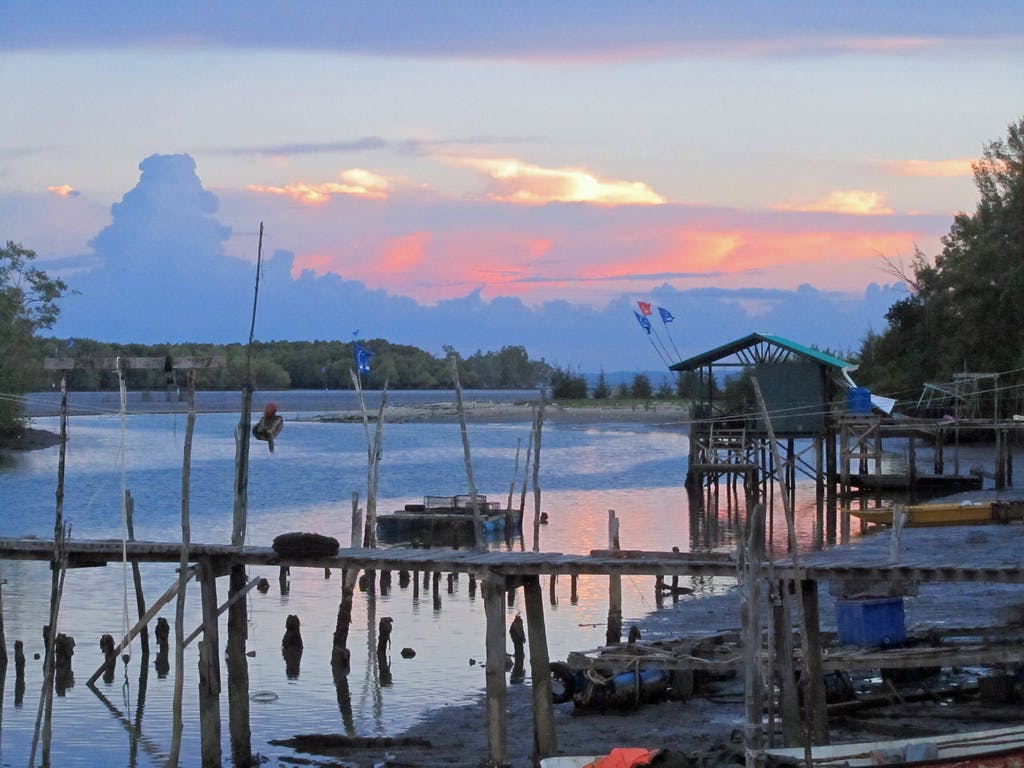 Slow tourism, which involves hitting fewer places in a trip to stay longer at each destination and fully immerse in the local experience, has been inching into the mainstream. Generally, it means driving less and exploring places on foot. Maybe one less beach or nightclub, and one more art or cooking class.

The movement started in the 1980s — when Italians wanted fast food chains out to preserve local cuisine and farms. Observers say Covid-19 gave the movement a boost, as travel restrictions made quick hops between cities and countries more difficult.

What slow tourism does not encompass, however, is unwinding in carefully curated resorts isolated from nearby communities, or spending a few days on cruises – those vessels emit huge amounts of carbon and air pollutants. They also do little good for harbour communities – much of the tourist dollars do not filter down to them. 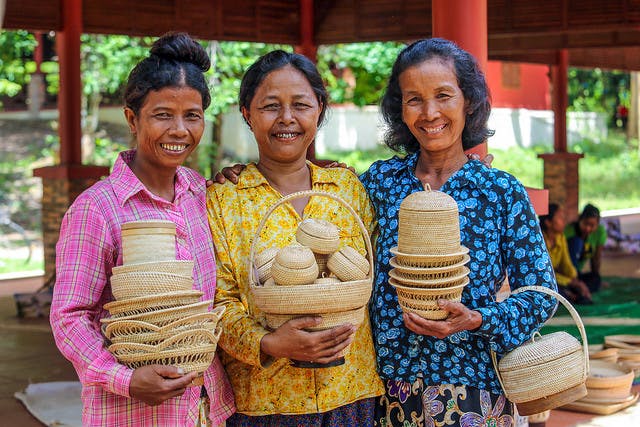 Purchasing products and services from local businesses is the best way to make sure money stays within the community, so check and ask to make sure. This is especially important in the wake of the pandemic — small businesses in Asia Pacific’s hospitality sector suffered the biggest disruptions, according to a study by the Asian Development Bank and World Tourism Organisation.

Eco-tourism businesses in the region that depend on tourist dollars are also hit hard. Phuket Elephant Sanctuary, which shelters aged elephants, said it needs further support to maintain its land and buy animal feed. The small number of visitors trickling in since Thailand partially opened its borders to tourists mid-2021 is not enough, it wrote on its website. The sanctuary is calling for online donations.

“Sustainability is not just about the physical environment, it is also about the cultural, social and economic development,” said Chang.

Tread carefully off the beaten path 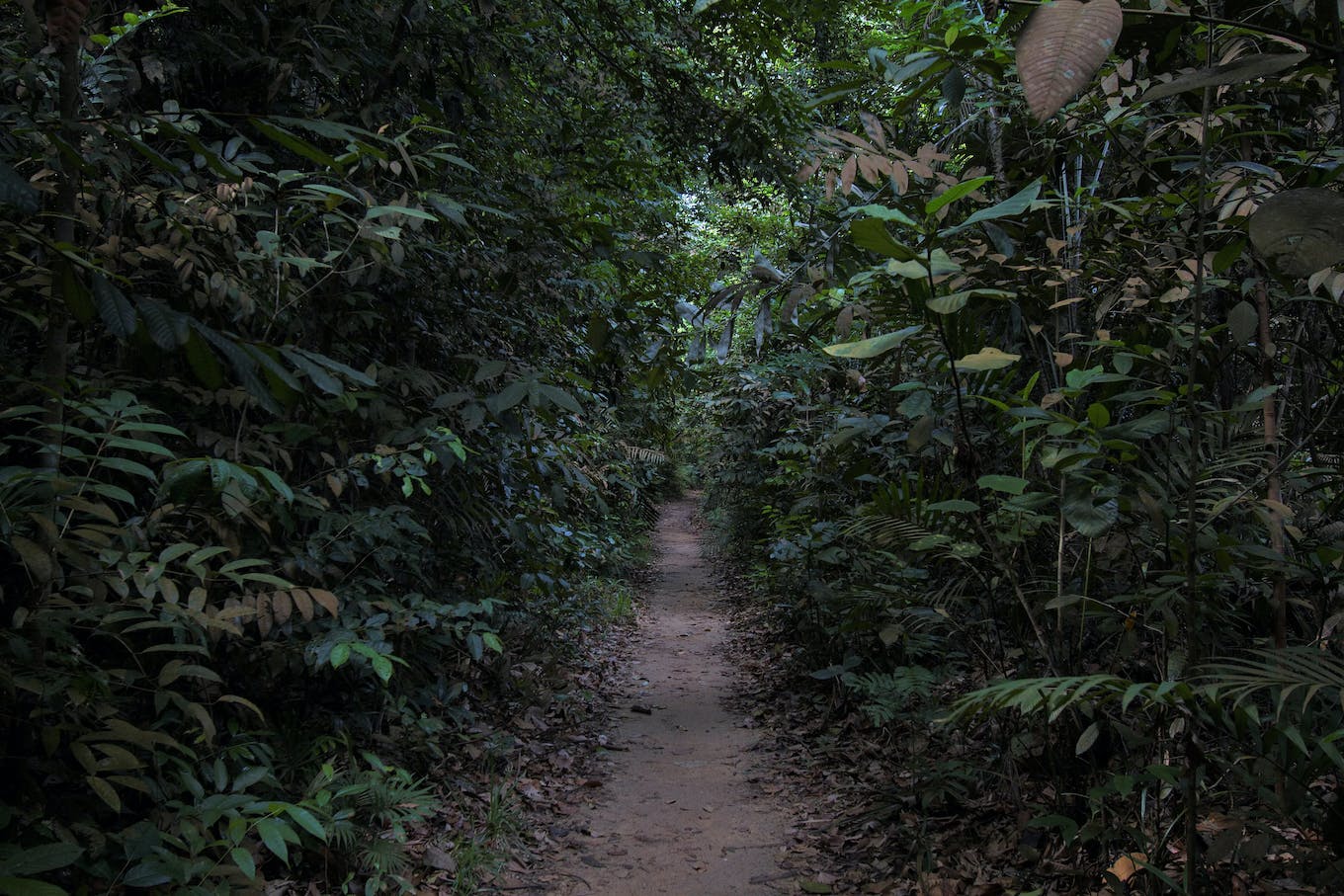 A hiking path in MacRitchie Reservoir Park, which is part of a nature reserve in Singapore. Image: Liang Lei/ Eco-Business.

While mass market tourism often correlates with a huge environmental footprint, veering away from it has its own risks too. For example, by intruding on the privacy of people who never agreed to open their lives up to the foreign gaze.

“Those places may never have wanted you here in the first place, and weren’t prepared for tourists,” said Chang. He cited how the government curated model houses in a floating village in the capital, Bandar Seri Begawan, to showcase what traditional life used to look like. Signs were put up to discourage tourists from venturing deeper into the residential areas, to minimise disruption for people living there.

Tourists literally going off-track in nature could trample on precious wildlife too, Chang added. He said the key is to do research beforehand, and heed signs telling travellers what not to do.

Bring along the good habits

Just because water and electricity are not charged by the meter in hotels does not mean they should be left running. Nor should single-use plastics be utilised excessively, just because they are being offered. These are advice few heed once they jet off, said Chang.

At this point in time when borders are opening, I feel that sustainability is just not going to be what people think of first. The first things will be location, whether it is efficient, whether it is the cheapest option.

Clara Lee, who had her first overseas holiday since the pandemic in March 2022

“It would be nice when you go to a hotel or destination, and they are already thinking of ways to make things better,” said Mitzi Contes. The 47-year-old teacher said her siblings who went on holiday in Phuket, Thailand and Cebu, Philippines had found reusable glasses in their hotel rooms. When Contes was on holiday in Boracay, all she had were plastic bottles. 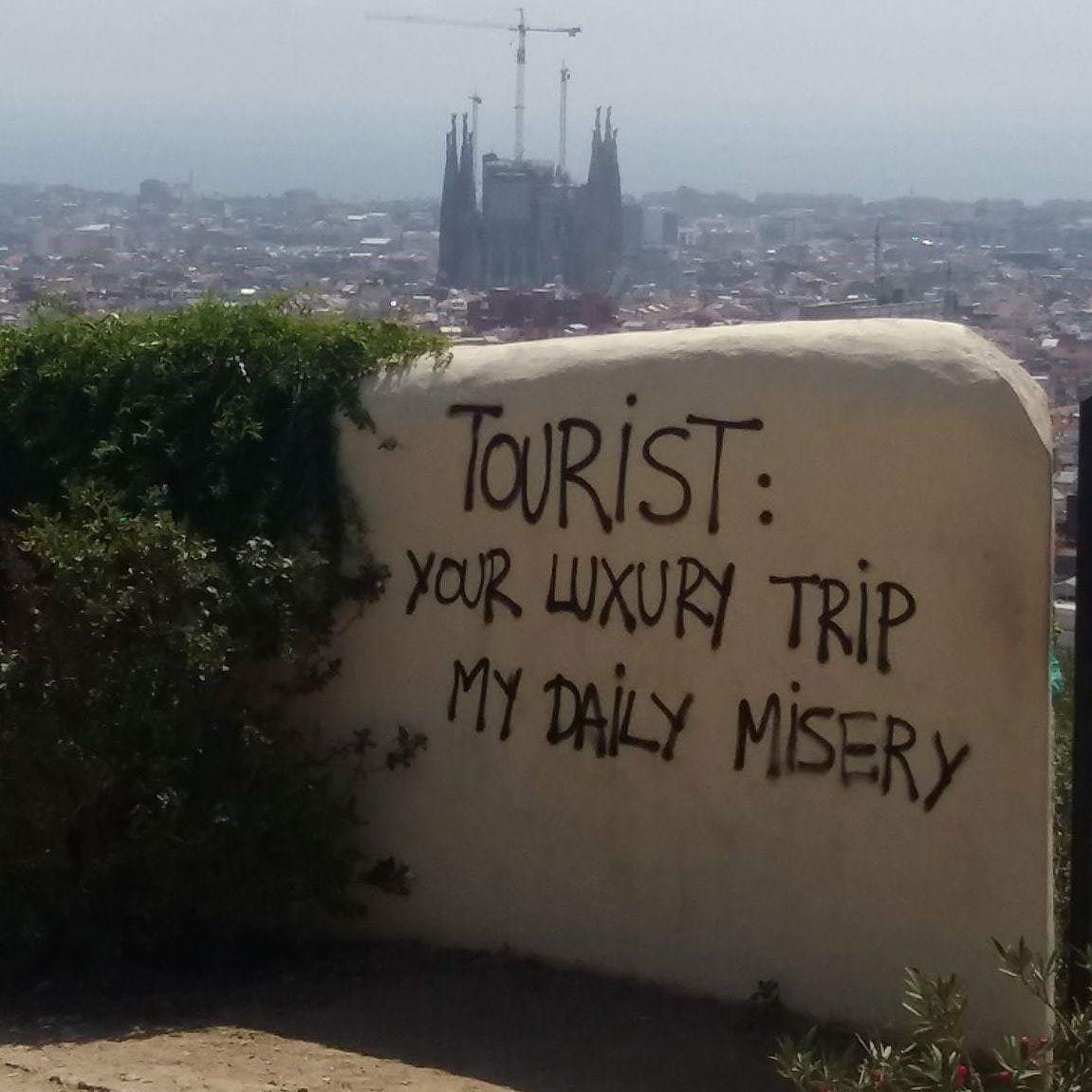 “At this point in time when borders are opening, I feel that sustainability is just not going to be what people think of first. The first things will be location, whether it is efficient, whether it is the cheapest option,” said Lee.

“I don’t think sustainability will be at the forefront, but it should be,” she added.

And why should travellers care? Chang pointed to a piece of famous graffiti art, ostensibly inked by a resident near Park Guell, Barcelona, that reads, “Tourist: your luxury trip, my daily misery”.