How is global media reporting on the climate crisis?

In a recent study, media experts found that domestic socio-economic and political factors such as national income and press freedom influence how local media portray the climate crisis. In reporting a global phenomenon, how have journalists brought home the story of climate change?

Climate change is a crisis that crosses borders, but until recently the global media has struggled to effectively report on a phenomenon that touches virtually every corner of the world.

However, despite growing media attention by major news outlets, climate journalism remains highly localised, with domestic factors shaping how journalists across the world tell the story of climate change.

According to a recent study by researchers in the United States and Vietnam, media coverage of climate change differs from country to country and is strongly influenced by the politics and development levels of individual countries.

One of its key findings revealed that richer countries framed climate change as more of a political issue that affects policymaking, national security and government elections. Articles in these countries also focused more on scientific research and evidence of climate change.

Domestic politics and scientific evidence were two of the seven different ways climate change was framed in 37,000 articles that were published across 45 countries from 2011 to 2015. The other contexts in which the climate crisis was reported were: international relations, economic impact, social progress, natural impact and energy.

A few of the Asian countries represented in the study were Bangladesh, Singapore, India, Pakistan, Malaysia and the Philippines, where English-language media was easier to access.

“If we don’t portray climate change accurately and sufficiently how will we establish an agenda to fight it?”

Press in wealthier countries reported more extensively on the scientific aspect of climate change because these countries had greater financial resources to support climate research and study the science, the study suggested.

Climate coverage also tended to be more politicised in these countries, where climate change remains a controversial issue that is often contested by multiple groups vying for influence over the media and policymaking.

“In the United States, one of the richest countries, we are still talking about whether climate change exists and what causes climate change. Many developed countries are still debating about how much resources should be allocated to tackling climate change, even though the conversation began decades ago,” said Hong Tien Vu, an assistant professor of journalism at the University of Kansas and one of researchers behind the study.

Across all countries, most news were found to fall within the context of international relations—written in terms of climate change conferences, foreign aid and intergovernmental agreements. This context was also most popularly used in developing countries, along with the natural impacts of climate change.

“We will write about climate change when we have diplomatic visits and there is a memorandum between two countries, or when there is an international meeting like the Conference of Parties (COP climate talks),” said Vu on how the local media reports on climate change in Vietnam.

Karoline Kan, a writer and environmental journalist at chinadialogue, agreed that the focus on covering international climate meetings often made climate change appear “like it is something happening in another country,” which downplays the need for national action on climate change.

“Every November during the United Nations climate talks the coverage on climate change in China increases. Because of this kind of reporting, many Chinese people who read news still have not realised how urgent the situation is,” she said. “Most of these stories are also translations from English news articles. There is less of the field reporting in China that would make the people realise climate change is happening here and now.” 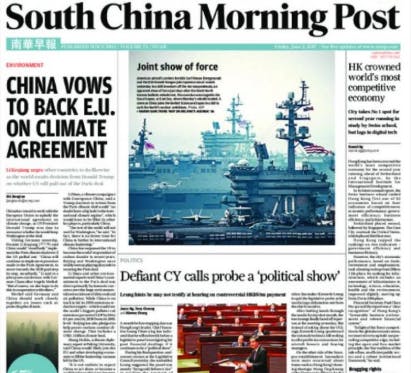 Printed before President Trump had announced his decision to withdraw from the Paris Agreement, the Hong Kong English-language published a front-page story on China’s support for the international climate deal.

She also added that since the United States announced that it would withdraw from the Paris Agreement, the Chinese media often portrayed China as a world leader in tackling climate change, as such stories gain the most traction among the public.

In Bangladesh, one of the countries that is most vulnerable to climate change, Banani Mallick, a reporter for national newspaper The Daily Observer, often reports on the economic costs and impacts of climate change on health and livelihoods.

“Bangladesh is not responsible for most of the emissions, rather we are one of worst victims,” she said. “Our climate reporting can help in getting attention from the global bodies who are directly working to reduce carbon emissions and taking multiple steps to mitigate the impacts of climate change.”

While Mallick and her colleagues often report on how communities are adapting to climate change through local, innovative methods, she said that writing about the technologies used in developed countries can help both domestic and global policymakers from these countries introduce and fund such solutions in Bangladesh.

Climate change is a regular feature on Bangladesh’s news feed. The media often reports on local and international efforts at climate adaptation and the disastrous impacts of climate change on the country. Credit: Daily Observer E-Paper

How the media covers climate change shapes how we act

Climate change reporting has long been on the margins of mainstream news, relegated to the fields of science or environmental journalism.

However, according to an article by the Columbia Journalism Review, the perception of climate coverage as a subset of environmental news has recently begun to shift as more newsrooms realise that the topic cuts across other beats such as health, business, inequality, food and sports.

“Coverage by climate journalists has never spurred a comprehensive social response, nor has it reshaped journalism itself. We now better recognise the difficulties of communicating climate change, but it still gets scant attention and resources in newsrooms,” wrote Rosalind Donald, a journalist and communications PhD candidate at Columbia Journalism School.

She further wrote that the focus on false balance in traditional journalism also compromises climate change reporting, as “fringe views are presented on a par with the more established scientific consensus.” 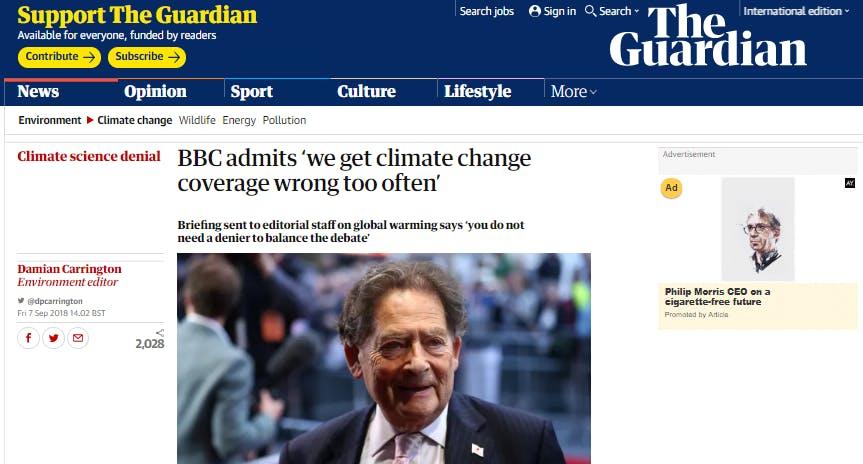 News outlets in the United Kingdom and United States have traditionally maintained ‘balance’ in climate reporting by giving airtime to climate skeptics and deniers. Image: The Guardian.

A 2011 report by Jaimer Painter, a research associate at the Reuters Institute for the Study of Journalism, found that print media in the United States and United Kingdom quoted or mentioned climate skeptics significantly more than news outlets in Brazil, China, India and France.

According to Vu, where the issue is highly politicised in countries such as the US, the media is a platform for climate change deniers or sceptics to sway the conversation and influence policymaking. Achieving false balance in the media was one of the ways oil and gas giant Exxon Mobil and its counterparts Shell and the American Petroleum Institute sowed public doubt on climate change.

Vu added that given the scale and urgency of climate change, how the media shapes public understanding of the issue has a direct impact on how governments, businesses and civil society respond to the crisis.

While studies on climate coverage have been done on individual countries before, his team’s research aims to be more inclusive of developing countries and take a large scale approach to reflect the global impact of climate change.

“If we don’t portray climate change accurately and sufficiently how will we establish an agenda to fight it?”