US Vice President Joe Biden and Chinese President Xi Jinping have kicked off the 47th World Economic Forum in Davos, where government and business leaders aim to stem the tide of populist sentiment and forge cooperation on climate change.

While US President-Elect Donald Trump was tweeting dissatisfaction at his perception of how CNN will probably cover his daughter in an upcoming piece, Chinese President Xi Jinping was kicking off the 47th meeting of the World Economic Forum, which this year has the theme “Responsive and Responsible Leadership”.

Xi drew applause from business leaders – many from the United States – as he urged delegates to the annual powwow in Davos, Switzerland to embrace inclusive globalisation, fair trade, and coordinated action on climate change.

“Pursuing protectionism is just like locking one’s self in a dark room,” Xi said. “Wind and rain might be kept outside, but so are light and air.”

He urged the world to honor the Paris Climate Agreement, and vowed that China would not only meet but exceed its current commitments – boosting its economy in the process. Indeed, the country already has more than three times as many renewable jobs as the US does, according to the International Renewable Energy Agency, and it plans to invest 2.5 trillion yuan ($360 billion) in renewable energy through 2020.

The meeting comes one week after the 12th Global Risks Report showed that business leaders see climate change, income inequality, and a breakdown of social cohesion as three of the greatest threats to global prosperity.

Fifteen sessions will focus on climate change, and nine will focus on clean energy, while several discussion papers were released to highlight the need to purge deforestation from corporate supply chains.

“Environmental risks stand out as prominent,” said Margareta Drzeniek Hanouz, WEF’s head of global competitiveness and risks, as she walked reporters through the report, which is based on a survey of business leaders from around the world.

“Four out of the five environmental risks that we look at are in the upper right quadrant of this matrix,” she said, referring to the risk matrix you’ll find a few paragraphs down. “That means they will have a large impact and are very likely to happen over the next ten years.”

“The environment is becoming more of a pivotal risk,” she added. “Many of the consequences of inaction on the environment are going to spill over into societal risk or geopolitical risk.”

Indeed, weather-related events already displace more than 20 million people per year – roughly one third of all refugees, according to the United Nations Refugee Agency.

The environment is becoming more of a pivotal risk. Many of the consequences of inaction on the environment are going to spill over into societal risk or geopolitical risk.

The Matrix that Hanouz mentioned ranks risk according to both impact and likelihood. 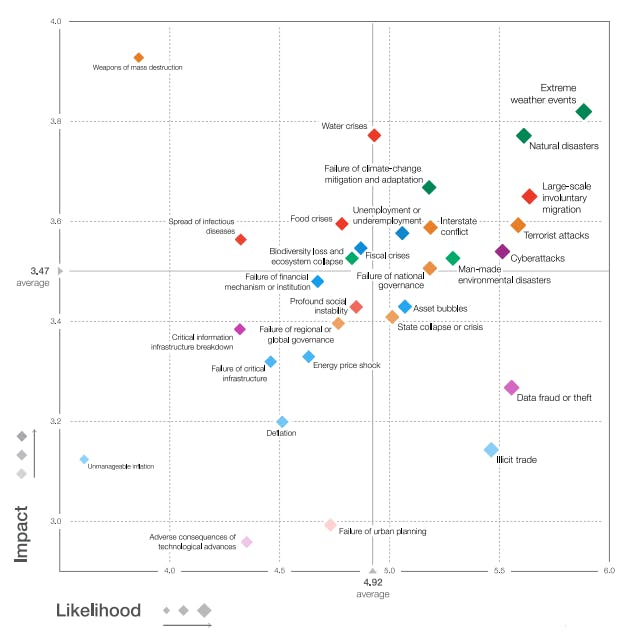 Source: World Economic Forum Global Risks Perception Survey 2016
Note: Survey respondents were asked to assess the likelihood of the individual global risk on a scale of 1 to 7, 1 representing a risk that is not likely to happen and 7 a risk that is very likely to occur. They also assess the impact on each global risk on a scale of 1 to 5 (1: minimal impact, 2: minor impact, 3: moderate impact, 4: severe impact and 5: catastrophic impact). 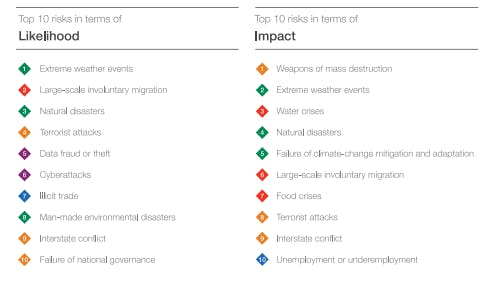 Changes in land use still generate more than 30 per cent of all greenhouse-gas emissions, and much of that comes from illegal deforestation. Marco Albani, Director of Tropical Forest Alliance 2020 (TFA2020), highlighted the opportunities that companies face in purging deforestation from supply chains.

“Ending tropical deforestation is critical to achieving the objectives of both the Paris Climate Agreement and the UN Sustainable Development Goals (SDG),” he wrote in a discussion paper for one of the sessions. “First though, it requires a substantive transformation of the supply chains of four major commodities – beef, soy, palm oil and pulp and paper.”

Those “big four” commodities are responsible for the bulk of the world’s deforestation, and while hundreds of companies have pledged to reduce their impacts on the world’s forests, progress reports were only available on 48 per cent of those pledges as of November 2, 2016, according to the Forest Trends Supply Change project, which tracks corporate reporting on such commitments.

On the upside, those reporting progress were 72 per cent of the way towards their goals. A new analysis is due in March.

The need for green infrastructure

Rick Samen, the WEF board member charged with overseeing climate issues, pointed out that trillions of dollars will be needed to re-develop global infrastructure in a resilient way.

“Eighty per cent of the funds that are required for both the SDGs and climate change are related to sustainable infrastructure, new investment, or retrofitting of old,” he said.

“There isn’t anywhere near enough money in the public coffers of either developed or developing countries to be able to achieve those goals, and the only solution is to optimise the blending of public and private capital in the system and apply it toward sustainable infrastructure in the various domains that matter for climate and the SDGs.”

In December, research showed that nearly $25 billion had been spent to secure green infrastructure in 2015, but that the bulk of the money still came from the public sector.

At the same time, a survey of impact investors showed that private investment in conservation had topped $8.2 billion over the previous decade as more private money found its way into the blend that Samen described – a blend that Johan Rockström of the Stockholm Resilience Centre also addressed in an essay related to a session focused on environmental finance.

“Today, the number one economic threat to humanity is our inability to value nature,” he wrote – apropos, since $3 billion earmarked for conservation investment stayed on the table because investors couldn’t find enough projects to invest in.