News Ecosperity 2019: From ambition to action

How can Southeast Asia’s clean energy transition be sped up?

Despite plentiful sun, wind and tidal potential, Southeast Asia has been slow to shift from fossil fuels to clean energy to fuel its fast-growing economies. How can the region quicken the pace of its transition to renewable energy?

In Southeast Asia, a region with tremendously diverse economies, resource distribution and population densities, a one-size-fits-all approach will not suffice to accelerate the transition towards a clean energy future.

“To bring down emissions, the region must deploy a wide range of low-carbon technologies and solutions in the areas of electricity generation, storage and transfer, and each country must consider its own specific challenges and opportunities,” said Moniz, who’s currently the Chief Executive of the Energy Futures Initiative and Nuclear Threat Initiative.

Singapore — a small and densely populated city-state with limited natural resources and space — may be ill-suited for the deployment of large-scale solar and wind power. But it could generate electricity from nuclear fusion or use hydrogen as a zero-emissions fuel for vehicles and energy storage and transfer, he said.

The problem is that such breakthrough technologies, which are needed to help steer the world towards climate neutrality by 2050 if the Paris Agreement objective is to be met, are currently not available at an affordable price, Moniz said.

Nuclear fusion has enormous potential. It is free of emissions and uses little land, said Professor Ian Chapman, the Chief Executive of the United Kingdom Atomic Energy Authority, at a session called “Beyond Renewables: Technology Solutions Addressing the Decarbonisation Imperative”.

In addition, the radioactive waste nuclear fusion produces has a much shorter half-life than that of nuclear fission, which means it takes less time to decay.

But the process of forcing two atomic nuclei together to release energy requires unimaginable amounts of heat and pressure, and current nuclear fusion facilities are not energy efficient enough to produce electricity on a commercial scale, said Chapman.

The first facility to do so, which is currently being built in France by a collaboration of 35 nations, will start operating in 2025 and will have enough capacity to power a medium-sized city, according to Chapman.

The potential of hydrogen to power heavy industries or for transportation is similarly constrained because the gas must first be created using another energy source, and current capacities to do so with net zero emissions are not commercially ready to scale, said Pierre-Etienne Franc, Vice-President of the Hydrogen Energy World Business unit at industrial gas supplier Air Liquide. 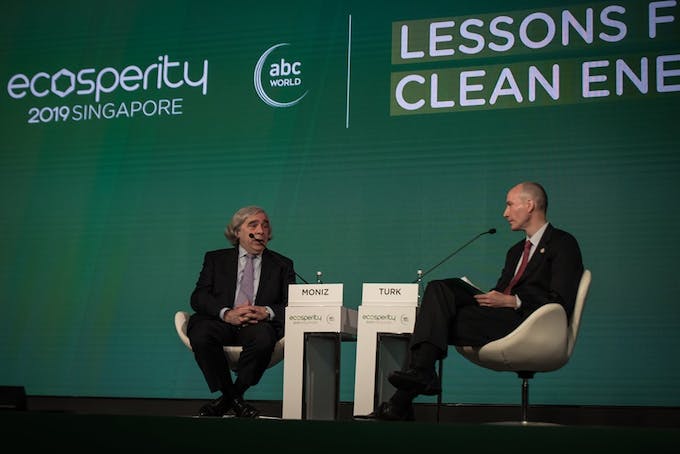 Not only must Southeast Asia address how it produces and stores energy, but also how the region consumes it, said Wong Kim Yin, Group Chief Executive of utilities company Singapore Power.

In Singapore, the issue of energy consumption is “particularly acute”, he said.

“We have to meet our Paris commitment, which is 36 per cent below 2005 [energy intensity] levels by 2030, so we must consider not only new energy sources but also how we can cut down on energy consumption while maintaining the same lifestyle,” he said.

One way is to use more efficient district cooling systems, which deliver chilled water from central facilities to buildings using 42 per cent less energy than conventional air-conditioning systems, he noted.

With its large coastal population and agriculture dominating many of its economies, Southeast Asia is particularly vulnerable to climate change, and yet it is the furthest behind on climate action.

Despite falling costs of renewable technology, global energy-related carbon emissions rose by 1.7 per cent to an unprecedented high in 2018 and Southeast Asia was the only region in the world where the share of coal—the single biggest source of greenhouse gas emissions globally—to generate power actually increased.

The region is also lagging behind in the implementation of mandatory efficiency measures. This means that the potential to improve energy efficiency is huge. Ramping up efficiency requirements on appliances and improving efficiency in the transport sector, for instance, could significantly reduce electricity consumptions.

If the ASEAN region fails to divorce itself from coal, millions of people risk losing their homes to rising seas and livelihoods will be in peril as decreased water flows from Himalayan glaciers trigger unprecedented water shortages due to global warming from increasing accumulation of carbon emissions.

Achieving the scale of the transition that Southeast Asia needs to exit coal completely will require a whole variety of new energy assets.

Due to rapid economic growth, urbanisation, industrialisation, expanded access to energy and growing populations, Southeast Asia has seen an 80 per cent increase in energy demand between 2000 and 2017, according to a recent Ecosperity report, and demand is set to grow by nearly two-thirds until 2040.

“Economic growth in this region will continue to be dramatic and with that, there will be more substantial industrial development and many more vehicles,” Moniz said.

“One needs to take advantage of the opportunity of literally building an energy infrastructure that will enhance the quality of life as the economy is growing,” he said.

Getting investors on board

To get more renewables on stream, the region must attract investors, but the problem is that often green energy projects are not bankable and therefore unlikely to receive support from financial institutions, said Surya Bagchi, Global Head, Project and Export Finance at Standard Chartered Bank.

He was speaking at the World Bank Group’s Innovate4Climate summit, a partner event of Ecosperity Week, which was presented by investment firm Temasek.

“Achieving the scale of the transition that Southeast Asia needs to exit coal completely will require a whole variety of new energy assets,” she said.

“In addition to the utilities for solar and wind, you need the storage and infrastructure to support that because the renewable resource might not be where the existing transmission infrastructure is located,” she said.

Blended finance combines public official development assistance with commercial loans. Through the deployment of concessional finance, the approach significantly reduces the risk involved for investors to come on board and can, therefore, mobilise additional commercial funding.

“The objective of blended finance is to address market failures. Using concessional finance to facilitate a transaction is often the easy way out and can help a project get off the ground,” Sylvester said.

Blended finance could facilitate the deployment of large-scale solar and wind farms, but particularly in the ASEAN region where a lack of energy access is still prevalent, it could also catalyse investment in small-scale solutions, noted Bagchi of Standard Chartered Bank.

In 2019, it is estimated that almost 60 million people in Southeast Asia still live in the dark, while 230 million people remain reliant on solid biomass as a cooking fuel.

Off-grid or mini-grid solutions can generate electricity locally, while rooftop solar systems and household batteries could save countries the cost and effort needed to extend existing grids, he said.

“Such solutions that pair public with commercial finance while harnessing existing customer relationships to achieve a lower emissions outcome could be replicated in Southeast Asia,” she said.

The coolest sustainability innovations at Ecosperity 2019

Can we maintain our quality of life and feed humanity without costing the earth? Innovators shared their innovations that could transform current modes of production and consumption in Singapore.
The coolest sustainability innovations at Ecosperity 2019

How can the fashion business make recycled garments sexy?

An estimated US$500 billion is lost every year from barely worn clothing that is landfilled or burned. Can Asian consumers tap their growing spending power to change the fashion industry for good?
How can the fashion business make recycled garments sexy?

This year's Ecosperity conference explored how to get Asia's circular economy spinning, speed up Southeast Asia's clean energy transition, and better manage the region's dwindling water resources. Here's what we learned this year.
From tipping cascades to exponential curves: 5 things we learned at Ecosperity 2019