How attractive is Asia for renewables?

China is the world's most attractive country for renewable energy investment, according to a new study by Ernst & Young. How do other Asian countries fare?

Despite the popular conception of China’s coal-fueled economy and smog-ridden cities, nowhere else can match the Middle Kingdom for renewable energy potential, according to a new report from Ernst & Young (EY).

China invested more than $44 billion in clean energy projects in 2017, up from $32 billion in 2016, helping to place the country above the United States and Germany in EY’s global index for Renewable Energy Attractiveness (RECAI).

China tops RECAI for the third year running, while India—which ranked second last year—has fallen below the US and Germany.

Ranked fourth, India added more energy capacity from renewables than coal for the first time last year, but the uptake of solar and wind has struggled to meet the country’s ambitious renewable energy targets.

Japan, ranking eighth, has dropped one place. Bankruptcies to more than 80 solar companies as a result of acute tariffs and competition have slowed progress in one of the region’s leading lights for renewable energy.

The Philippines ranks 21st out of 40 countries in the study. The archipelago has set the ambitious renewable energy target of 15.3 gigawatts by 2030 – three times the 5,438 MW installed capacity in 2010. 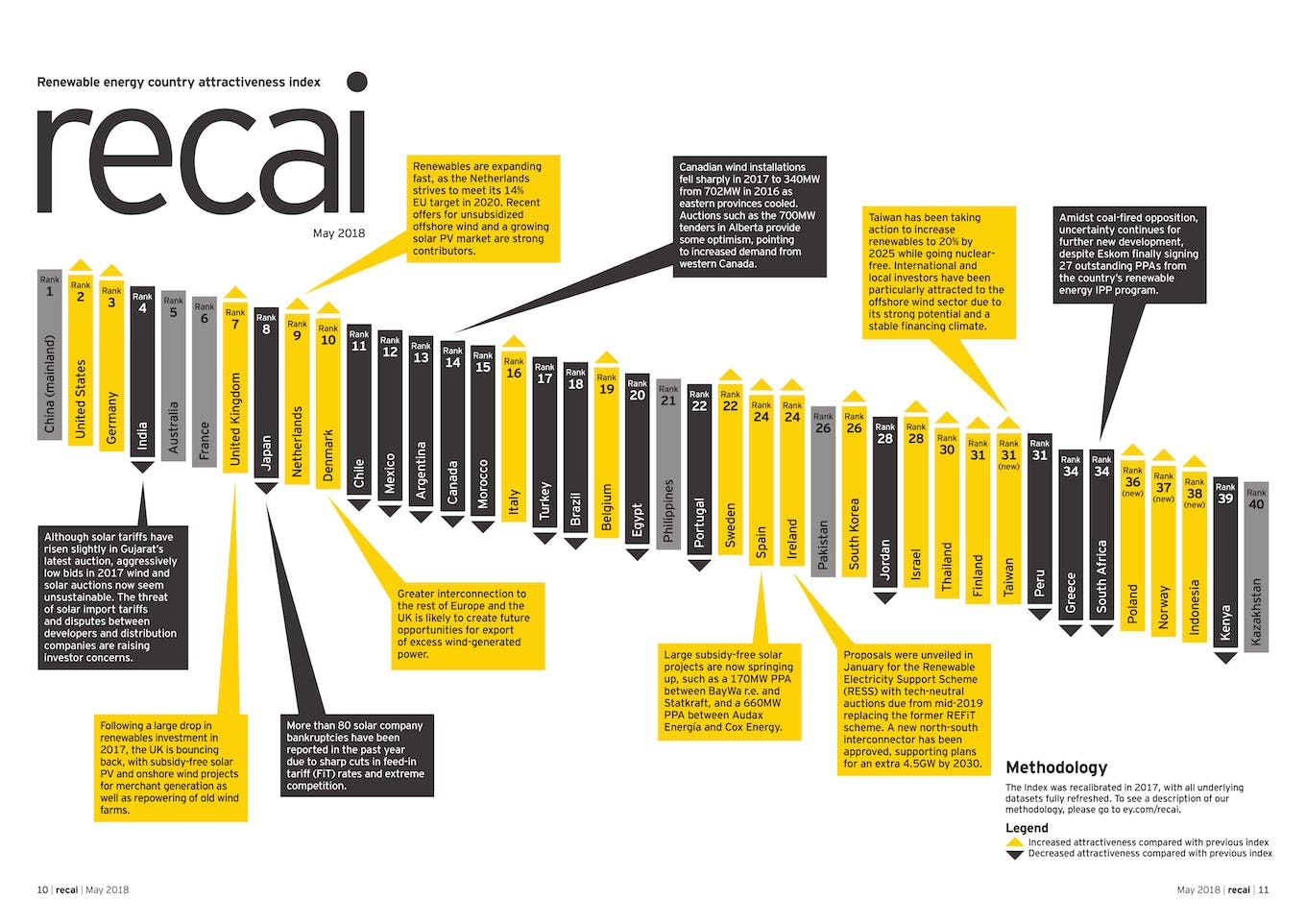 EY’s latest Renewable Energy Country Attractiveness Index (RECAI) report ranks the top 40 countries in the world in terms of the attractiveness of their renewable energy investment and deployment opportunities.

In 31st, Taiwan has increased its attractiveness by committing to a 20 per cent increase in renewables by 2020 and going nuclear-free.

After dropping out of the rankings last year, Indonesia has reclaimed a near bottom spot at 38. Despite growing demand for energy and abundance of renewable resources, Indonesia is struggling to attract investors. To achieve the government’s ambitious target of 23 per cent renewable energy supplied by 2025, an estimated US $101 billion will need to be invested.

The index refers to how attractive a country is to investors for renewable energy projects. Topics defining the index’s methodology cover: the need for long-term energy supply, how supportive policies are to renewable projects, the infrastructural and financial capacity to deliver these projects, and the strength of past projects to determine the outlook for renewable technologies.

The stability and investment climate of a country is the overarching concern for EY’s measurement of renewable energy attractiveness.

RECAI chief editor Ben Warren claimed that the index shows “growing evidence of the maturity of the renewable energy sector.”

He added: “Wherever we look, we see growing evidence of the maturity of the renewable energy sector. A few years ago, cuts to subsidies, import tariffs and rising interest rates would blow down the industry. Today, they create headwinds, but no hurricanes.”