Half of world’s ocean to face multiple ‘climate stressors’ by 2030, study warns

Climate change is altering the world’s watery expanses in a number of ways, with serious knock-on effects for the ocean’s plants and animals, according to new research.

The study finds that with just 15 more years of current emissions, over half of the world’s ocean will be exposed to more than one source of stress, affecting everything from the tiniest plants to the mightiest whales. By 2050, that figure rises to around 86 per cent of the ocean, say the authors.

The paper, published on March 7 in the journal Nature Communications, finds that if all countries stick to their pledges to cut emissions, as part of the Paris Agreement, this would relieve the pressure by giving organisms an extra 20 years to adapt or migrate.

But for Arctic species, there may be no refuge from climate change, the paper warns, regardless of how quickly we act to cut emissions.

The oceans are essential for human existence, the paper begins, providing a primary source of protein for one in seven of the global population.

But through our own activities, humanity is putting a strain on the ocean’s ability to perform that function, in four main ways.

First, warmer water is more inclined to stratify into layers, restricting access to nutrients for plants living on the surface. At the same time, excess CO2 absorbed by the ocean is making it more acidic, with consequences for marine life that build shells or skeletons.

Thirdly, warmer water reduces the amount of oxygen in the top layer of the ocean, the study explains. Finally, all of these things affect the process by which marine plants produce food to live and grow, known as primary production.

Dr Stephanie Henson, a specialist in biogeochemical oceanography at the National Oceanography Centre in Southampton, who is the lead author on the paper, tells Carbon Brief:

“Primary production is the base of the food web so the ultimate food source for everything in the oceans. If that food source is declining, that will obviously put stress on the marine ecosystems as well.”

There are areas around the Indian Ocean, for example, that will be quite rapidly affected. So there is the possibility that fishing countries along those borders will suffer.

The study looks at how those four types of stressors interact in the future to give an overall “stress factor”. 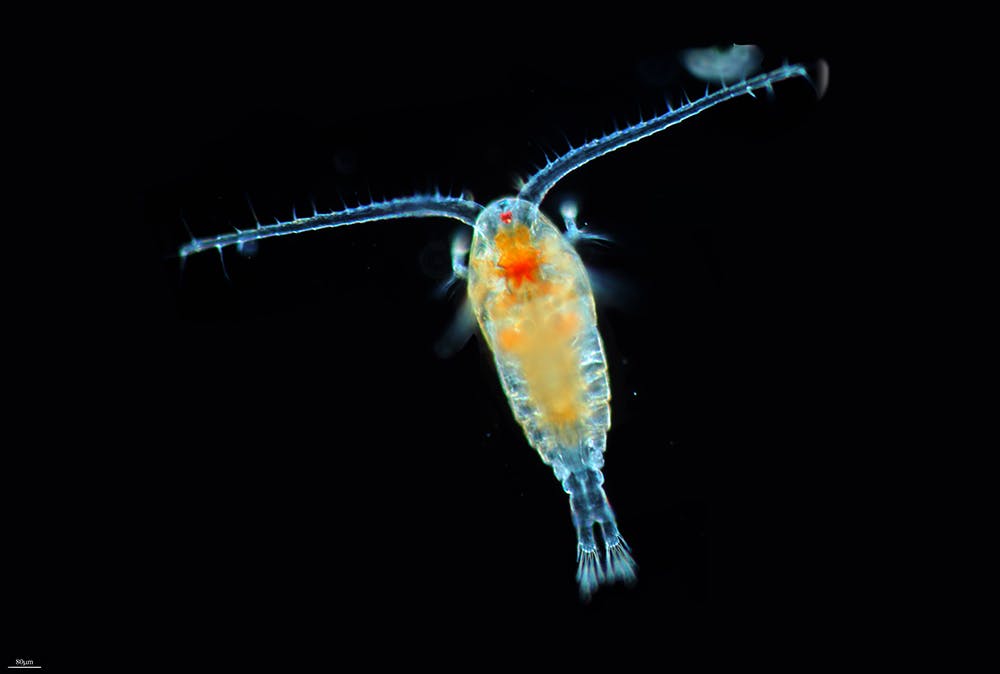 A calanoid copepod, a type of zooplankton. Species of warm-water copepod in the North Atlantic have shifted northward in recent decades. Credit: Proyecto Agua.

First, the team need to define what kind of conditions in the oceans count as normal and what is likely to move marine life into stress mode. Henson explains:

“Ecosystems are adapted to the natural range of variability that they experience. This means that organisms living in a particular part of the ocean are able to survive the normal range of winter-to-summer temperatures.”

The scientists used those bounds of the natural summer-winter cycle to define what was tolerable for a particular region. Henson continues:

“Then we looked at where conditions under climate change went outside that boundary of normal conditions – and stayed there until the end of the century. That gave us our definition of when things became unusual.”

But it gets more complicated, the paper explains. The four different stress factors rarely occur in isolation, sometimes overlapping to amplify the overall impact on marine life.

A lowering of pH and oxygen concentration can make corals and crustaceans more sensitive to rising temperatures, for example. Sometimes stressors can interact in unexpected ways to trigger a positive effect – all of which makes studying this topic in field or lab studies extremely challenging, the paper notes.

Today’s study is a new attempt to streamline research in a lot of different areas, says Dr Scott Doney, department chair in marine chemistry at the Woods Hole Oceanographic Institute, who wasn’t involved in the research. He tells Carbon Brief:

“The study is novel because it brings together several different science threads to create a unified picture of ocean climate change.”

The team ran 12 different climate models to try to pinpoint when the “signal” of each of the four stressors – temperature, pH, oxygen and primary production – was likely to emerge from the background “noise” of natural variability, marking the shift to stressful conditions.

The results show that pH is the fastest of the four stress factors to escalate. In fact, the team found 99 per cent of the open ocean already is experiencing stress from water getting more acidic.

The maps below from the paper shows how each of the four stress factors pan out across the world. The red colour spread across panel c shows how widespread exposure to stress from acidifying oceans is already.

Similarly, rising temperatures are already causing stress to organisms in the subtropics and the Arctic, the paper explains. You can see this in panel a in the graphs below.

On average, the world’s oceans will tip into temperature-related stress by about 2034, assuming emissions continue to track as high as they are now.

For primary production, that point is reached later in the century, around 2052 (panel b). For oxygen, it is later still, in 2070 (panel d). Henson tells Carbon Brief: Whether or not organisms will be able to cope with the effects of climate change depends to some extent on the speed of the change. As the paper explains:

“The more rapidly the system is pushed out of its natural range of variability, the less time the organisms will have to adapt or acclimate to the new conditions or migrate to more suitable areas.”

Another factor is whether more than one rapidly-developing stressor occur together. The Arctic appears to be a “hotspot of change”, says the paper, experiencing very rapid changes in pH, sea surface temperature and oxygen all at once.

For everywhere else, the changes are slower. But by 2030, 55 per cent of the world’s oceans will encounter a “mosaic” of stressors, rising to 86 per cent in 2050. By 2100, nearly two-thirds of the ocean (62 per cent) will be stressed by all four factors together, the study finds. Henson tells Carbon Brief:

“If organisms are negatively affected by climate change, that effect is going to continue all the way up the food chain, up from phytoplankton at the base, through fish and into animals like dolphins and whales, seabirds and so one.”

The impacts of stressed oceans will be particularly important for coastal developing nations, which depend heavily on the oceans for protein sources. Henson adds:

“There are areas around the Indian Ocean, for example, that will be quite rapidly affected. So there is the possibility that fishing countries along those borders will suffer.”

The team looked at an alternative scenario in which all nations signed up to the Paris Agreement succeed in their pledges to reduce their emissions.

For those well-versed in the Intergovernmental Panel on Climate Change’s emissions scenarios, this approximately corresponds to RCP4.5, implying warming by the end of the century of between 2.6-3.1C.

This level of mitigation would mean the pace of climate change in the oceans is much slower, says Henson. She tells Carbon Brief:

“What the mitigation scenario shows us is that it allows an extra 20 years or so for organisms to adapt and acclimate to conditions.”

The exception to the rule is the Arctic, where mitigation does little to slow the emergence of multiple drivers, the paper notes.

The study makes the implicit assumption that organisms will suffer with prolonged exposure to conditions outside of their natural ranges. But some studies have shown species appearing to thrive in environments that are less than optimal, the paper notes.

Across most of the global ocean, however, the implications for marine life will be similar:

“When the environment changes sufficiently that new conditions, or a new combination of conditions, emerge and persist, the organisms must adapt, migrate to more favourable areas, or face extinction.”

Marine creatures that already encounter big swings in natural variability may show the greatest resilience to change, the study suggests. Others may be able to migrate to new habitats.

For example, a species of warm-water copepod in the North Atlantic has shifted northward in recent decades. But, as the paper notes, this tactic won’t work for all species:

“Polar species are also particularly vulnerable as they cannot shift their geographical range northward in response to emerging drivers and so must either adapt to changing conditions or go extinct.”

Human societies will need to adjust so that livelihoods are protected, as well as marine biodiversity. Doney tells Carbon Brief:

“The next steps are to develop better informed strategies for protecting and managing marine ecosystems (for example, fisheries, coral reefs, marine mammals and seabirds) in light of climate stressors.”

Henson agrees, telling Carbon Brief that while her research defines the changes we’re likely to see in the oceans, scientists don’t yet understand what the ultimate effect on the marine ecosystem will be. She says:

“The marine ecosystem is so complex and there are so many different organisms. It’s interesting to think, does that mean some will be winners and some will be losers in the future ocean? Right now, we just haven’t got the information to know how that will play out.”

As the paper notes, climate change is “essentially a one-way street”, meaning that whatever changes occur in the marine environment, they are “unlikely to be reversed”.