British high street bank HSBC not only has weak standards for ensuring it does not finance unethical palm oil companies, but it also continues to provide services to companies which have violated its policies, said Greenpeace.

The report, titled Dirty Bankers: How HSBC is financing forest destruction for palm oil, said that HSBC has since 2012 been involved in arranging US$16.3 billion in loans and credit facilities to six errant palm oil firms, and has also raised US$2 billion in bonds for these firms.

By financing these companies, HSBC is violating its own policies on responsible lending, said Greenpeace.

Annisa Rahmawati, senior forest campaigner, Greenpeace Southeast Asia, said in a statement that “HSBC claims it is a respectable bank with responsible policies on deforestation.”

“But somehow these fine words get forgotten when it’s time to sign the contracts,” Rahmawati said, adding that forest fires in Indonesia have devastating health and climate impacts. She asked: “So why is HSBC helping to raise billions for the companies fanning the flames?”

But while the campaign focused on HSBC, it is by no means the only bank linked to destructive palm oil companies, said Greenpeace, going on to call HSBC a “relatively progressive” bank that has shown a willingness to engage with its critics.

Japan’s Sumitomo and Tokyo Mitsubishi banks, Singaporean bank DBS, and the Australia and New Zealand Banking Group (ANZ) were also linked to four or more of the case studies highlighted in the report.

But as Europe’s largest bank, HSBC has a responsibility to set high standards for the rest of the sector, noted the group.

It found that in 2012 and 2013, HSBC helped arrange US$190 million in loans to Bumitama, which since 2012 has had five complaints filed against it to the Roundtable on Sustainable Palm Oil (RSPO). This is the Kuala Lumpur-based industry association that certifies environmentally and socially-responsible palm oil.

In another instance, HSBC was part of various banking consortia that provided US$400 million in loans to Goodhope Asia in 2014. The company had been the subject of several NGO complaints to RSPO. One grievance, which is still unresolved, accuses the company of using excessive force against villagers, deforestation, and planting on peatland. 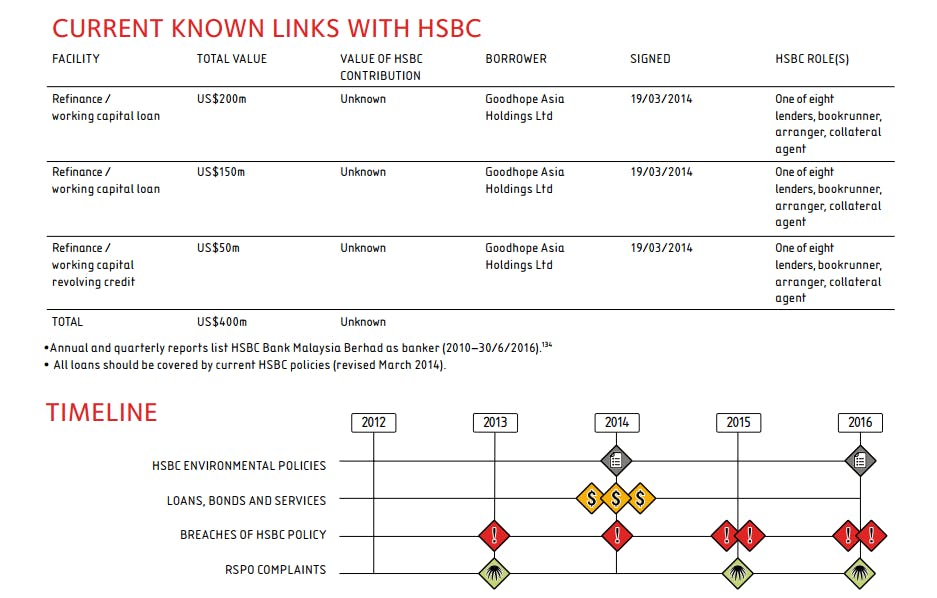 Greenpeace analysis highlighting financial links between HSBC and Goodhope Asia, as well as a timeline of the company’s breaches of HSBC’s sustainability policy. Image: Greenpeace

Greenpeace also found that HSBC had helped raise almost US$2.4 biliion in loans to various divisions of Korean multinational Posco Daewoo; HSBC’s on contribution was at least US$269 million. POSCO Daewoo’s palm oil business operates a plantation in Indonesia, and is not an RSPO member—this is a violation of HSBC’s policy.

Even the most basic due diligence on HSBC’s part would have thrown up the infringements by the six companies and raised alarm, said Greenpeace in its report. It added that this “raises the question: is HSBC failing to apply its policies altogether, or just failing to apply sufficient scrutiny when assessing whether current or prospective customers comply?”.

According to Greenpeace, HSBC refused to discuss the specific companies highlighted due to customer confidentiality concerns.

But the bank did tell Greenpeace that following the report’s findings, it was preparing a review of its exposure to the palm oil sector. It added that it had closed relationships with 93 palm oil companies since 2014, but declined to name them.

HSBC also told Eco-Business in a statement that it “does not knowingly provide financial services which directly support palm oil companies which do not comply with our policy”.

The statement continued: “We are not aware of any current instances where customers are alleged to be operating outside our policy and where we have not taken, or are not taking, appropriate action.”

In addition to criticising HSBC’s lending and financial services activities, Greenpeace also questioned the standards used by HSBC in its agricultural commodities policy, which was issued in March 2014 and lays out the criteria that palm oil, soy, rubber, and cattle producers must comply with.

The policy requires all its palm oil customers to be RSPO members by the end of June 2014, and have at least one management unit or facility certified by the association by the end of 2014. It expects 100 per cent RSPO certification for all company operations by the end of next year.

But Greenpeace noted that equating RSPO membership and certification to determine company sustainability is deeply flawed, because RSPO standards do not guarantee zero deforestation, and complaints filed with the association can take years to resolve.

A company’s RSPO membership also does not mean that 100 per cent of the palm oil it produces has earned the sustainability certification.

This is not the first time HSBC has been criticised for using RSPO membership and certification as a proxy for sustainability—a 2013 report by international campaigners Environment Investigation Agency also called HSBC’s reliance on this as “fundamentally misguided“.

However, the 2014 policy does not appear to have incorporated these criticisms.

HSBC claims it’s a respectable bank with responsible policies on deforestation. But somehow these fine words get forgotten when it’s time to sign the contracts.

In the wake of the report, Greenpeace has urged HSBC to explain to the public how it would revise its sustainability policy so that it is truly one which ensures “no deforestation, no peat, no exploitation”.

It also called on the bank to be transparent about the palm oil companies in its client base and set a deadline for them to adopt operation-wide zero deforestation policies—and to stop providing financial services or refinancing those that do not.

Richard George, Greenpeace UK forest campaigner, told Eco-Business while HSBC was the focus of this report, “the financial sector as a whole is lagging behind the rest of the market”.

But some positive practices are evident in the way German financier Deutsche Bank, for instance, has publicly stated that it will not fund or invest in Bumitama, and the Norwegian Government Pension Fund’s move to exclude most of the companies highlighted in the report, he added.

The latter, which George said was “at the more responsible and transparent end of the spectrum”, has not only excluded the palm oil firms, but the entire groups that these companies belong to. That is, it won’t lend to any part of the company if the agribusiness section is linked to social or environmental abuses.

While Greenpeace will continue its campaign against HSBC, “other banks shouldn’t feel off the hook,” said George. “The finance sector as a whole needs to step up and reform”.