Developing countries have made record renewable energies investments in 2019, a new report has found. As the Covid-19 crisis is having an immediate impact on renewables projects, experts say economic recovery plans must include clean energy.

The global South made record renewable energy investments in 2019, a new global trends report has found, as analysts say developing economies are outpacing their developed counterparts in green power generation.

Last year, developing countries other than China and India invested US$59.5 billion in non-fossil fuel energies, according to the Global Trends in Renewable Energy Investment report released today.

In terms of dollars invested in renewables, the developing world made up 54 per cent of the global total, outweighing developed economies for the fifth year in a row.

Countries that are party to the United Nations climate change convention are required under the Paris Agreement to reduce their greenhouse gas emissions to limit global temperature rises in this century to two degrees Celsius above pre-industrial levels. Renewable energies can contribute to meeting the Paris goals.

Taiwan was highlighted as a success story, following agreement for three large offshore wind projects that pushed investment up 390 per cent to a record $8.8 billion, the report said.

It’s clear that renewable energy is the only solution that can offer sustainable, resilient energy access at least cost.

Countries including South Africa, Jordan, Egypt, Morocco and Kenya that had been significant renewables investors had “sizeable” falls in investment “due in large part to gaps in auction programmes, and this was overall the main reason for the decline in [the Middle East and Africa] as a whole”, the report says.

McCrone says the global South pioneered the use of auctions, which are now a global phenomenon; Brazil was an early leader and there is ongoing “fierce” competition in Latin America and parts of Asia.

Many of the metals and rare-earth minerals needed to develop renewable technologies are extracted from developing countries. The ethical issues of this resource extraction are important, particularly regarding batteries, says Ulf Moslener, head of research at the Frankfurt School-United Nations Environment Programme centre and report co-author.

He says sustainable finance policies, such as the European Union’s green deal set to come into play next year, that force investors to consider environmental and social implications of projects, will be pushed to become global standards.

Large hydro-electric dams, which are often criticised for displacing communities and harming the environment, are excluded from the report’s investment figures. McCrone says some biomass sources, such as palm kernel shell and wood pellets, are also controversial due to deforestation concerns. 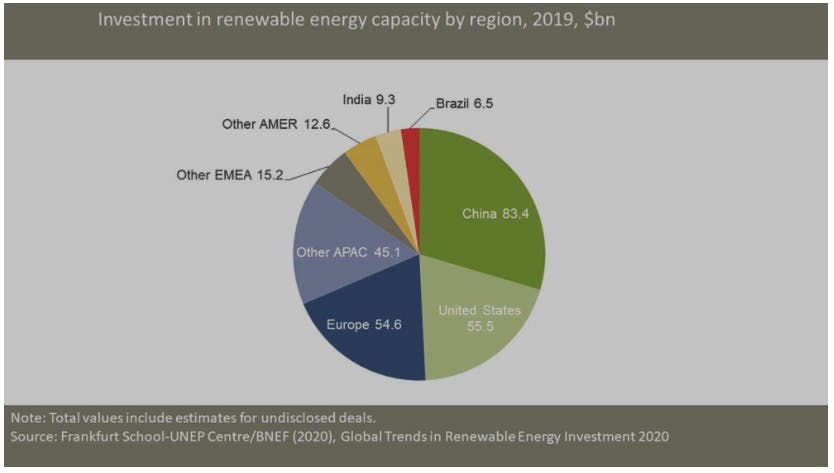 Developing countries need energy, McCrone says, and they are increasingly looking to renewables because of their growing affordability.

Rana Adib, executive director at REN21, a renewable energy policy think-tank and multi-stakeholder governance group, says renewable energy is proving an adequate and affordable energy solution in countries where large numbers of the population are still not connected to an energy grid.

“This contributes to raising awareness on renewables among the population, to building their support for these technologies and projects, and in turn to encouraging policymakers to further develop these technologies on a broader scale,” says Adib. 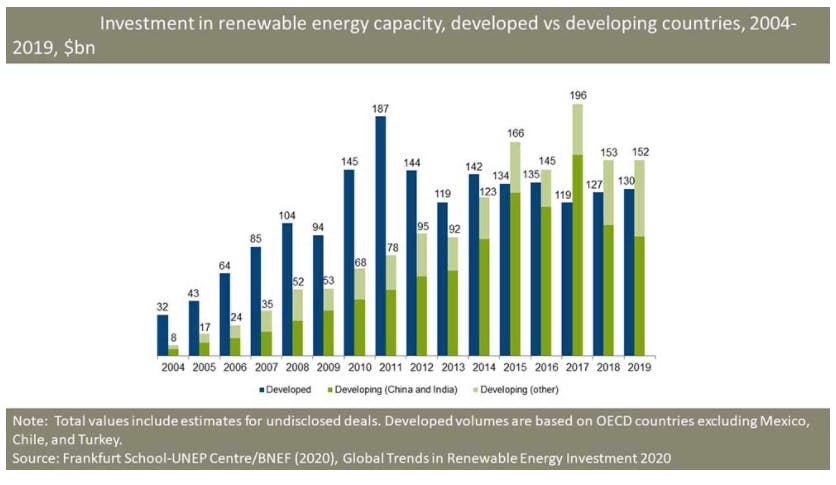 The number of developing and emerging countries with renewable energy policies was at 91 at the end of 2019, up from 21 in 2004, Adib adds.

McCrone says the Covid-19 crisis is having an immediate impact on renewables projects as construction has been paused and access to capital and permits has been limited.

Adib says economic recovery plans must include renewable energy. “Despite short term risks, we need to develop the necessary regulatory frameworks. This is particularly important in developing countries where there is increased pressure to support fossil fuels to meet energy needs,” she says.

“It’s clear that renewable energy is the only solution that can offer sustainable, resilient energy access at least cost.”

REN21 will launch its annual Renewables 2020 Global Status Report on 16 June, which is expected to examine the lack of uptake of renewables in the heating, cooling and transport sectors.

This article was originally published on SciDev.Net. Read the original article.