Google wants Asia to get serious about renewable energy

Google uses more electricity than the city of San Francisco and its energy demands are growing by 20 per cent a year. The tech giant is aiming to be completely powered by renewables in 2017, and wants Asian policymakers to make it easier for companies to buy clean energy.

As the world’s largest technology company with a near monopoly over how we search the internet, Google is no stranger to criticism for everything from denying us choice online to invading our privacy.

But in recent years the company have been trying to use its immense economic clout and huge share of the computing market for good. Or, as its corporate slogan urges, ‘Do the right thing. Don’t be evil.’

One area where the US$90 billion tech giant has devoted much time and resources to doing good is the environmental footprint of its operations.

Moving IT functions such as email out of dusty office server rooms and into the cloud can dramatically reduce the footprint of computing, as there is no longer the need for businesses to operate their own servers. Google argues in a study named It’s cooler in the cloud that using its cloud-based email service Gmail instead of an inhouse email system is up to 80 times less polluting.

Google’s own footprint is also a challenge for the company. Google’s servers, which power about 3.5 billion searches a day and billions more video streams and social media accounts, are growing in electricity consumption by 20 per cent a year. The California-based firm wants to rein in its footprint, and the man to do it is the global director of data center energy and location strategy Gary Demasi, who led Google’s delegation at the Paris climate talks in 2015. 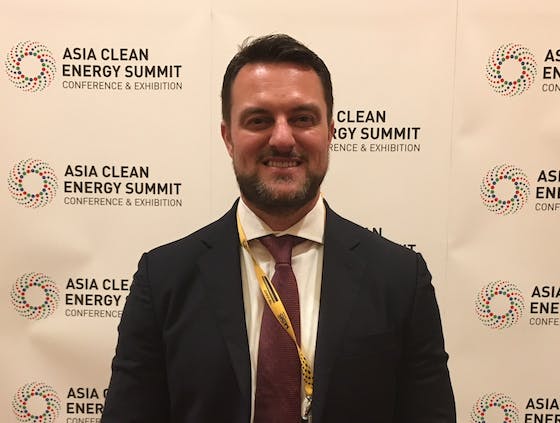 Demasi, who has been with Google for the last 12 years, is in charge of Google’s vast army of data centres, which are responsible for most of the company’s emissions. Though Google has been carbon neutral since 2007, it wants to go a step further by cutting fossil fuels out of its energy supply altogether and becoming 100 per cent renewable-powered.

This year is Google’s deadline for becoming fully renewable-dependent, Demasi told Eco-Business on the sidelines of the Asia Clean Energy Summit on 24 October.

The company is investing US$2.5 billion in renewable energy projects, and  currently procures about 2.6 gigawatts of renewable energy making it the biggest corporate buyer in history. But buying clean energy in Asia—where Google has two large data centres sites—is not easy, Demasi points out.

In this interview with Eco-Business, Demasi talks about how Google saves energy, the rise of the global corporate energy buyer, and the battle to persuade Asian policymakers to embrace renewables.

How much electricity does Google use?

We’ve been carbon neutral as a company for 10 years now. Our biggest area of focus is our data centres, as they use the most electricity. Alphabet [Google’s holding company] uses 6.2 terrawatt hours a year, according to the latest data. To put that in perspective, the city of San Francisco uses about 5 terrawatt hours a year. And Google’s electricity consumption is growing by 20 per cent year on year.

What is driving that increase?

The footprint of our data centres, and that’s driven by the growing use of our products, such as Gmail, YouTube and Google Cloud. All of that computing is done within 17 large industrial complexes filled, wall to wall, with data centres.

How do you ensure Google’s systems are as efficient as possible?

We design our data centres from the ground up, and we think they’re about 50 per cent more efficient than the average data centre you’d see in the market.

What are the most effective ways you’ve found to curb electricity consumption?

We very carefully control the way that hot and cold air are circulated in our data centres, to ensure that we’re using as little additional energy as possible to cool our systems.

We run our data centres warm. It’s not true that you need to refrigerate data centres. We run ours at 80 degrees Fahrenheit (26 degrees Celcius).

We also use free cooling—-that is, natural forms of cooling that do not require extra energy, such as outside air, re-used air, and canal water.

Google has been using machine learning to increase the efficiency of its data centres. How is that project coming along?

We have looked at all of the operating variables for our data centres, and ran an analysis using machine learning to work out how to run them more efficiently.

We worked out that Google’s power usage effectiveness (PUE)—that is, the overhead electricity used for ancilliary functions such as cooling—is 1.12. That means we use 12 per cent more energy for ancillary functions than we do for data centres. Using machine learning, we were able to drive down the PUE by 40 per cent. The project is in the pilot phase, but it’s looking very promising.

What is your take on Asia’s renewable energy outlook, and how is Google looking to influence its development?

Most of the [renewable energy] programmes in Asia are nascent, or certainly less developed than other parts of the world. For instance, there are no renewable energy credit programmes to signify that a megawatt hour of energy that you’re buying is genuinely green.

We have large data centre facilities in Singapore and Taiwan, and we’re looking to influence how policy around renewable energy is structured. For example, Taiwan is going through the process of deregulation, so we’re working with policymakers to structure corporate buying programmes at the same time. Deregulation should allow you to go directly to a developer to buy your power.

What does Google want to communicate about its energy efforts to stakeholders in Asia?

We want to make folks aware of some of the structures and processes we use in other parts of the world; to introduce the concept of the corporate power purchase agreement [where companies buy power directly from developers], and show that businesses are passionate about this [using renewable energy], because it makes good business sense—costs are being driven down over time.

The [energy] providers need to wake up to that, especially as businesses become more global, and bring global principles and ambitions with them. Companies want to fight climate change, be good stewards of the environment, and make the right long-term decisions for their companies.

Despite its huge renewable energy potential, coal-fired power stations continue to be built across Southeast Asia. How can even a big multinational like Google hope to have an influence on policymakers in this region?

I believe in the power of the buyer. There are many companies—not just Google—who have the same ambitions and needs as us, and want to use renewables. That demand needs to be aggregated and we need to find suppliers that are sensitive to that demand.

We’re talking about a huge investment from these companies that will have a big impact in terms of job creation, economic development and emissions reduction in this region.

Who is Google looking to aggregate its energy demands with in Asia?

There are many options. Other tech companies and big industrial players, maybe even with the residential energy market, but we can’t talk about specific projects at the moment.

How confident are you that Asian governments will wake up to the potential of the corporate energy buyer?

Even in Southeast Asia, things are changing. In Vietnam and the Philippines, for the first time we’re hearing about corporate power purchase agreements, and corporations are seen as financeable partners—previously it was just the utilities.

Right now, Japan is going through its first auction [Japan introduced a reverse auction system for large-scale solar energy projects this year; companies submit bids and compete to supply a fixed amount of power to utilities. The system was brought in to complement a feed-in tariff, which remains in place for smaller projects]. And we’re very excited, because we believe that that type of competitive market drives down cost.

A feed-in tariff drives the wrong sort of behaviour, and it’s very difficult for a company like Google to compete against the FIT plus the cost of the underlying energy.

What is your biggest ambition for the next five years?

What we really want, particularly with respect to Asia, is the ability for any company of any size to be able to buy renewables. That will require new energy regulation mechanisms, the ability to negotiate deals directly with developers, and green energy credit programmes that verify that green energy actually is green.