Negotiations are currently underway for a net-zero target for commercial aviation, but a new study warns that industry interference could obstruct effective regulation of global climate rules.

There is too much room for industry influence in United Nations-level negotiations for cleaner air travel, claims a new paper on the sector’s lobbying efforts.

Such activity could impact talks designed to set meaningful climate targets for the sector, as some of the players appear to oppose stronger policies and doubt the feasibility of reaching net-zero emissions by 2050, according to UK think-tank InfluenceMap.

As it stands, airline businesses already appear to be “highly successful” at influencing global climate policy, by weakening rules and promoting carbon offsetting as a decarbonisation solution, said InfluenceMap, the non-profit behind the study.

Commercial aviation is generally regarded as a sector that is hard to decarbonise, as alternatives to the highly-refined kerosene fuel needed are difficult and costly to produce. The industry contributes to almost 3 per cent of global emissions, and total emissions could more than double by 2050.

While jet travel tanked due to Covid-19, the industry is on track to fully recover by 2024, and post 70 per cent growth from 2019 by 2040, according to the International Air Transport Association (IATA). 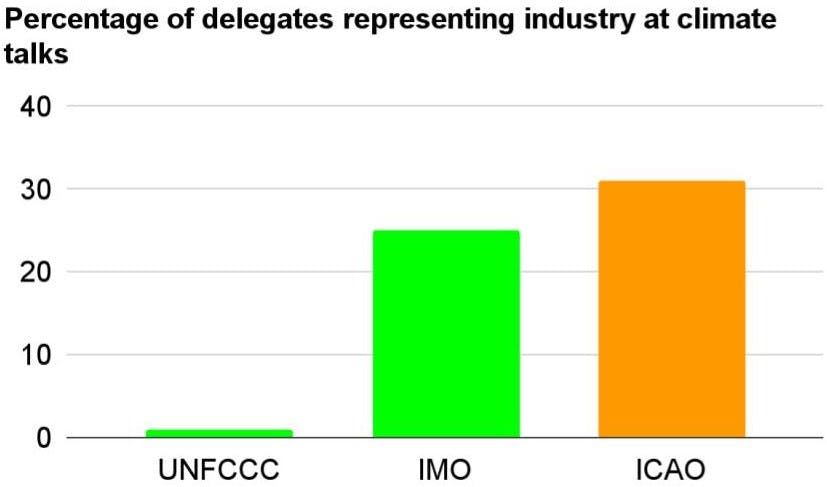 It found that 31 per cent of attendees at ICAO climate talks since 2016 were corporate representatives. The figure is higher than the 25 per cent at equivalent meetings for the shipping industry under the International Maritime Organization, and 1 per cent in the United Nation’s climate change group.

Job affiliations of climate negotiators are not released by ICAO, but the study found through online searches that over 20 national representatives at ICAO meetings are also employed by aviation or fossil fuel firms.

Only one environmental group, the International Coalition for Sustainable Aviation, is permitted at ICAO climate meetings, compared to at least five in the shipping forum, though the aviation coalition is itself made up of several organisations.

Documents that are released are costly, the think-tank added, with a 2019 report priced at over US$400.

InfluenceMap programme manager and report author Ben Youriev told Eco-Business that the ICAO’s council, which oversees the committee responsible for its climate initiatives, can reform its own rules to improve the organisation’s transparency.

“Having said that, everyone who participates in closed-door ICAO meetings has an opportunity to speak up,” Youriev added.

An ICAO meeting is currently taking place in Montreal, Canada, and negotiators are expected to discuss getting countries to commit to net-zero commercial aviation by 2050, up from the current target of halving emissions by then.

The move has the support of IATA, which represents airlines operating over 80 per cent of all commercial flights and pledged its own 2050 net-zero target last year. However, InfluenceMap’s study said the backing of the aviation industry is questionable, given that firms in the sector have a history of using sustainability in marketing campaigns for air travel.

Many earlier targets, including those for developing sustainable fuels, have already been missed or forgotten, the study said.

It added that aviation businesses have appeared to steer past climate efforts in their favour.

For instance, ICAO has not promoted measures to curb the growth of commercial flying, in line with the positions of major airlines and despite such rules being called for by climate scientists, the study said.

It also pointed to how ICAO’s 2016 decision to implement a global carbon offsetting scheme, instead of national and regional climate rules, appears to reflect the wishes of industry groups, including IATA.

“We expect all states to honour, support and defend CORSIA. Its integrity must be protected from additional taxes, regional duplicative schemes, or similar measures that we continue to see being introduced,” IATA had said at the current ICAO meeting, referring to the aviation carbon offsetting scheme by acronym.

Carbon offsetting involves firms paying for projects such as planting trees and installing solar panels to strike off emissions from their record books. Offsetting does not by itself encourage airlines to adopt lower-emissions technologies.

“Reaching net-zero by 2050 will almost certainly require more stringent regulation at global, regional and national levels,” he said, adding that measures could include higher fuel taxes and a mandate on using sustainable fuels.

The current ICAO meeting is scheduled to end on Friday (October 7). Eco-Business has sought comment from ICAO and IATA in response to InfluenceMap’s report.

Correction note: This story has been edited to reflect that the International Coalition for Sustainable Aviation is a group of entities, and to clarify which meetings are off-record to the media within ICAO.