America's JP Morgan Chase has pumped more than the GDP of Finland into fossil fuels expansion since the Paris climate accord of 2015, while Japan's and China's mega banks have also been 'failing miserably' in their response to climate change over the last four years, a report from a coalition of NGOs has shown.

It’s as if the penny hasn’t dropped for the financial services industry that climate change is not only an increasingly disruptive environmental phenomenon, but a grave risk to the stability of the global economy.

Financial support for the fossil fuel industry has increased every year since the Paris Agreement came into being in 2015, according to a new report, Banking on Climate Change 2020, from a collective of environmental groups including Rainforest Action Network, BankTrack and Indigenous Environmental Network.

The Paris Agreement recommended that global warming be capped at 2°C above pre-industrial levels to avoid the most devastating effects of climate change. To do so, scientists say greenhouse gas emissions, the bulk of which come from the burning of fossil fuels, must be slashed.

However, the report found that 35 global banks have not only been maintaining but expanding the fossil fuels sector, with more than US$2.7 trillion in investments made since 2015.

It is unconscionable for banks to be approving new loans and raising capital for the companies that are pushing hardest to increase carbon emissions.

United States-headquartered banks JPMorgan Chase, Wells Fargo, Citi and Bank of America have accounted for 30 per cent of all fossil fuel financing from the major global banks since the Paris accord.

JPMorgan Chase, which recently announced it will close one-fifth of its branches in the US in response to the Covid-19 coronavirus pandemic, pumped US$269 billion—more than the gross domestic product of Finland—into the fossil fuels sector over the last four years, notably in fossil fuel expansion, Arctic oil and gas, offshore oil and gas, and fracking. 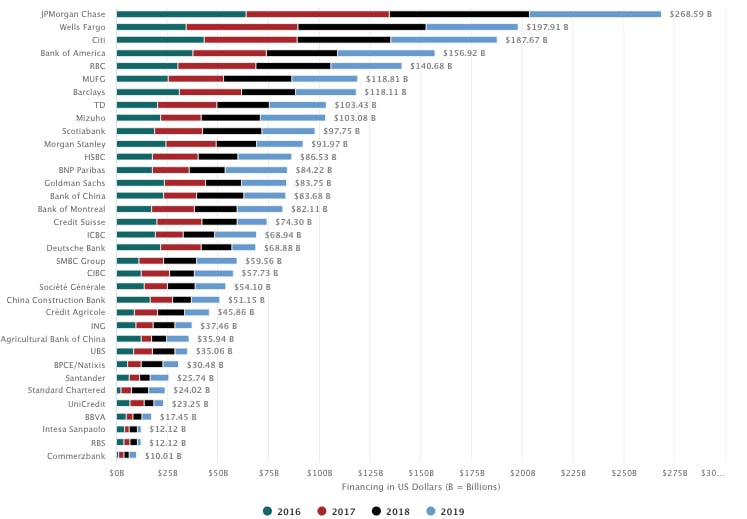 The investments in fossil fuels made by the world’s biggest 35 banking institutions between 2016 and 2019. Source: Banking on climate change report.

China’s mega banks were found to be world’s biggest financiers of coal—the single biggest driver of greenhouse gas emissions—since the Paris Agreement. China Construction Bank and Bank of China are the biggest bankers of coal mining, pumping US$25 billion into the sector between them. The Industrial and Commercial Bank of China and Bank of China were the heaviest funders of coal power globally, investing US$42 billion combined, according to the report.

Though China’s banks are a noteable exception, the report found that 26 of the 35 banks in the report now have policies restricting coal finance, which has helped to push the finance sector away from coal. China’s big four banks do not have any climate policies in place.

A growing minority of the world’s biggest banks—now 16—now also restrict finance to some oil and gas sectors. The report said European banks have the toughest fossil fuel lending restrictions. France’s Crédit Agricole, the Royal Bank of Scotland and Italy’s Unicredit are said to have the most progressive climate policies.

The majority of the world’s top banks are signatories of frameworks such as the United Nations’ Principles for Responsible Banking and the Equator Principles, which commit banks to align their business strategies with the Paris Agreement.

But because potential emissions from the coal, oil and natural gas already in production exhaust the carbon budget for the 2°C warming limit of the Paris Agreement, any bank that supports the further expansion of the fossil fuel sector is Paris-incompatible, the report noted.

Alison Kirsch, climate and energy leader researcher, Rainforest Action Network, said that it is “crystal clear” that banks are “failing miserably” in their response to climate change and the decarbonisation of the global economy.

“As the toll of death and destruction from unprecedented floods, droughts, fires and storms grows, it is unconscionable and outrageous for banks to be approving new loans and raising capital for the companies that are pushing hardest to increase carbon emissions,” she said.

The report emerges at a time when the ongoing Covid-19 coronavirus is threatening to derail investment in renewable energy, according to the International Energy Agency.