Coal power capacity growth dropped for the third year in a row in 2018, but the world's second largest economy is powering ahead with a plan that puts global climate goals in jeopardy.

Despite the best efforts of President Donald Trump to keep his country’s ageing coal fleet online, the United States retired more coal power plants than any other country in 2018, as the future darkens for the world’s biggest source of man-made greenhouse gas emissions.

According to a new report published on Thursday from Greenpeace, Global Energy Monitor, and The Sierra Club, titled Boom and Bust 2019, coal power capacity growth declined in 2018 for the third year in a row, reflecting an ever tougher political and economic climate for developers of the fossil fuel.

Financial restrictions by over 100 institutions and coal phase-out plans in 31 countries have helped precipitate a 20 per cent drop in newly completed coal plants in 2018, while the start of new coal projects dropped by 39 per cent.

While the US accounted for over half of the world’s retired coal plants in 2018, China and India, which have accounted for 85 per cent of new coal power capacity since 2005, saw the number of permits for new plants drop to record lows, the report found.

China’s energy targets have a greater bearing on global emissions than any other national policy decision.

The dragon keeps on puffing 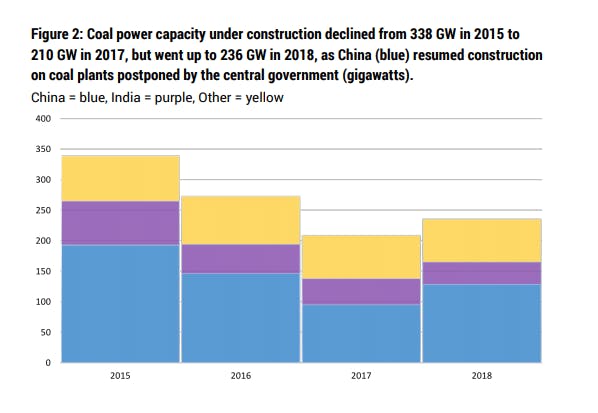 However, while India is bringing more wind and solar online than coal, China is planning to dramatically ramp up its coal capacity.

Despite toughening restrictions on coal in China from the central government, satellite photos reveal that developers have restarted construction on dozens of projects that had previously been shelved.

A new report by an organisation that represents the country’s power utilities, China Electricity Council, has proposed setting China’s coal capacity limit at 1,300 gigawatts—which would allow 290 gigawatts of new capacity to come online. This is more than America’s entire existing coal fleet.

“While this would not necessarily breach China’s pledges under the Paris Agreement, another coal power construction spree would be near impossible to reconcile with emission reductions needed to avoid the worst impacts of global warming. China’s energy targets have a greater bearing on global emissions than any other national policy decision,” Myllyvirta noted.

The report finds that while amount of coal-fired capacity under development has fallen by 60 per cent since 2015, climate goals such as the Paris Climate Accord cannot be met without a complete stop of new coal plants and a swift drop in coal plants now in operation. 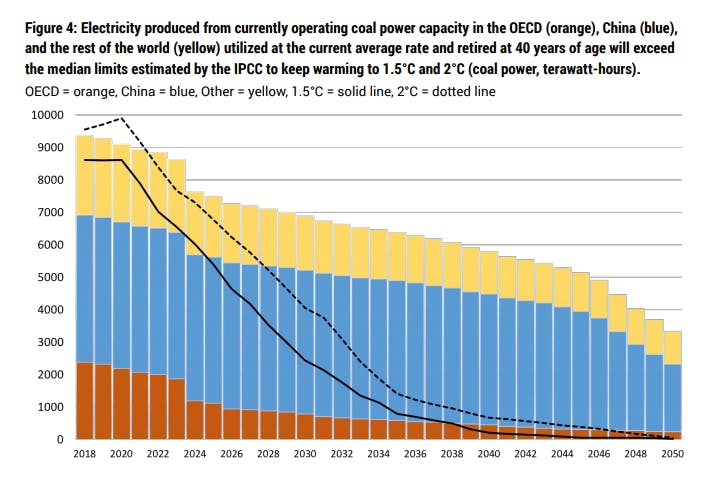 Electricity produced by coal over time. Source: Boom and Bust 2019

“We need to radically phase down coal plant use over the next decade to keep on track for Paris climate goals,” she said. 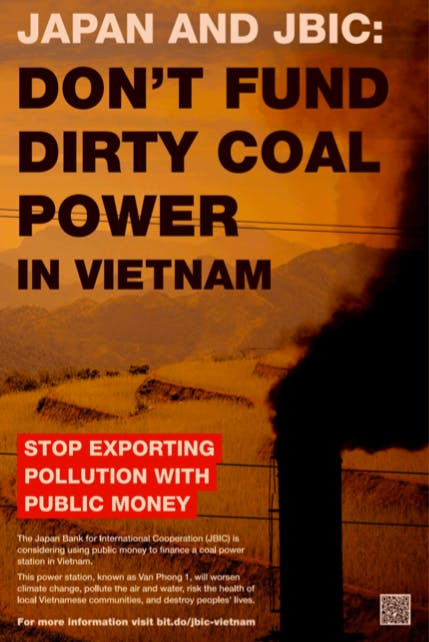 The Boom and Bust 2019 report emerges in the same week that financial close stalled on a major new coal-fired power project in Vietnam.

The signing of a US$1.8 billion loan facility for the 1,320MW Van Phong power plant in Khánh Hòa province was pushed back following pressure from non-government organisations (NGOs).

A coalition of NGOs led by Friends of the Earth Australia ran an advertisement in international business newspaper Financial Times on Tuesday 19 March that called on Japan and the Japan Bank for International Cooperation (JBIC) to stop funding “dirty coal power in Vietnam” and to “stop exporting pollution with public money.”

A report in August last year by Market Forces found that funding Van Phong would likely breach recent commitments made by a number of Japanese banks to adopt stricter climate policies and back away from coal-funding overseas. 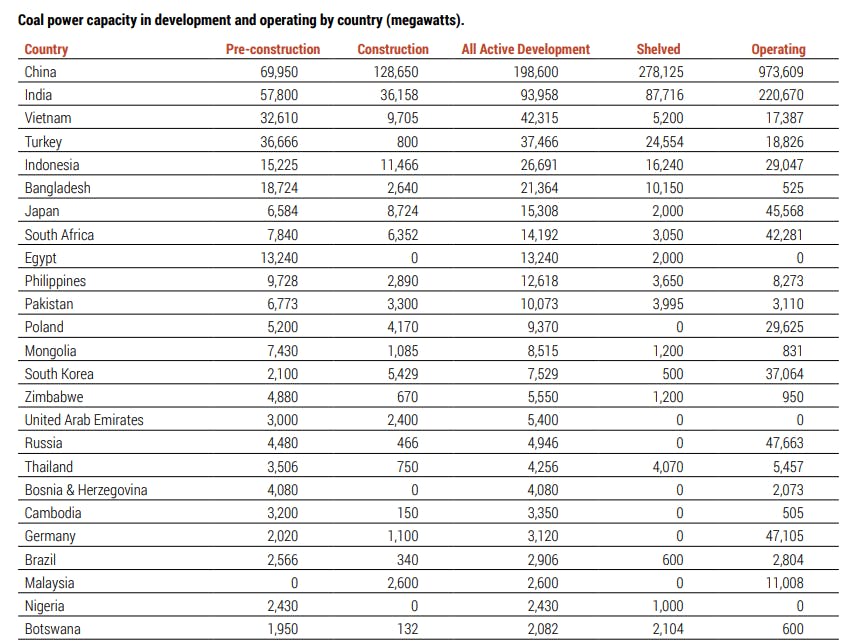 Coal capacity in development by country. Source: Boom and Bust 2019