Heavy smog choking China this winter has brought environmental concerns into sharp focus in the year of the rooster. The upcoming IE expo China event in Shanghai will provide the tools needed to fight China’s war on pollution.

“We will make our skies blue again,” China’s premier Li Keqiang told the national people’s congress in Beijing in March.

This may sound like wishful thinking after a brutal winter that has prompted a series of hazardous air warnings, not only in the industrial north but across the country.

But plans to combat air pollution by upgrading coal-fired power plants, introducing steeper fines for polluters, and slashing vehicle emissions could mean that China breathes easier after four decades of industrialisation powered by the burning of fossil fuels.

China’s water and soil also badly need fixing. More than half of China’s population of 1.37 billion does not have access to safe drinking water, and 16 per cent of the country’s vast expanse of land - or around 3.33 million hectares – is too polluted to farm.

Heavy industry is largely to blame, and the government introduced a new way to deal with industrial pollution at the start of the year.

The Environmental Protection Tax Law, introduced in January, replaces a discharge fee system with an environmental tax - the first of its kind in China.

The tax means that companies that are directly responsible for air and water pollutants, solid waste and noise, must pay a tax.

Although some companies are exempt to begin with, for example agricultural production and major transport functions, the law is seen as a milestone in bringing pollution from heavy industry under control.

Waste not, want not

Though it doesn’t generate as much media attention as China’s air and water issues, the country’s mounting waste problem is a growing headache for city planners.

China’s breakneck economic development, the rise of the middle class consumer and a lack of recycling infrastructure has meant a massive increase in garbage.

China produces, on average, 1.12 kilograms of residential waste per person per day. This is a lot less than the United States (2.5 kg per person per day) but for China’s GDP per capita, its waste levels are mountainous.

Initiatives to burn trash and improve landfill operations have so far not resolved the root cause of the problem – the absence of a reliable recycling system and, crucially, a culture of recycling.

China began trialling garbage separation schemes in eight key cities at the start of the millennium, but with limited success as residents lacked an imperative to sort their own waste.

Tougher rules for citizens who do not sort their garbage, with fines for failing to do so, were introduced in 2015, with trials in Shanghai, Hangzhou and Guangzhou. But as is often the case in China, implementation and enforcement remain key obstacles.

Greater pressure on China to clean up its act is not only a challenge, it’s an opportunity – particularly for businesses that specialise in cleaning water and air, managing waste, and remediating soil.

Changhua Wu, a clean tech expert who advises the Ministry of Environmental Protection, says that the country’s most polluting companies have a “strong incentive” to invest in clean technology, not only to meet tougher emissions regulations but to stay competitive.

Manufacturing companies are now liable for a product’s full lifecycle, not just for producing it, according to a new law introduced in January known as the Extended Producer’s Responsibility regulation. This will mean that companies will need to use clean technologies and measure their progress in reducing their environmental footprint.

Wu adds that the Chinese public, which has the most to gain from a cleaner environment, is increasingly demanding that companies are more accountable for their impact.

“China today has the required push and pull to scale up clean technologies,” says Wu.

With this in mind, an environmental technology and solutions event is to be held in Shanghai in May that brings together China’s big polluters with clean technology providers.

Called IE expo China, the event is the Chinese incarnation of global environmental trade show IFAT Munich, and is expected to attract over 48,000 visitors from 30 countries to the Shanghai New International Expo Centre from 4-6 May.

Such is the demand for the burgeoning clean tech market in China that a spin-off event, IE expo Guangzhou, is to be held later in the year to cater for the Southern China market.

Major players including Veolia, SUEZ, Huber, KSB, Andritz, Durr, TITECH, Eisenmann, Heraeus, VAG and BHS are regular supporters of IE expo China, which was first established in 18 years ago, with the Guangzhou event springing up in 2014. 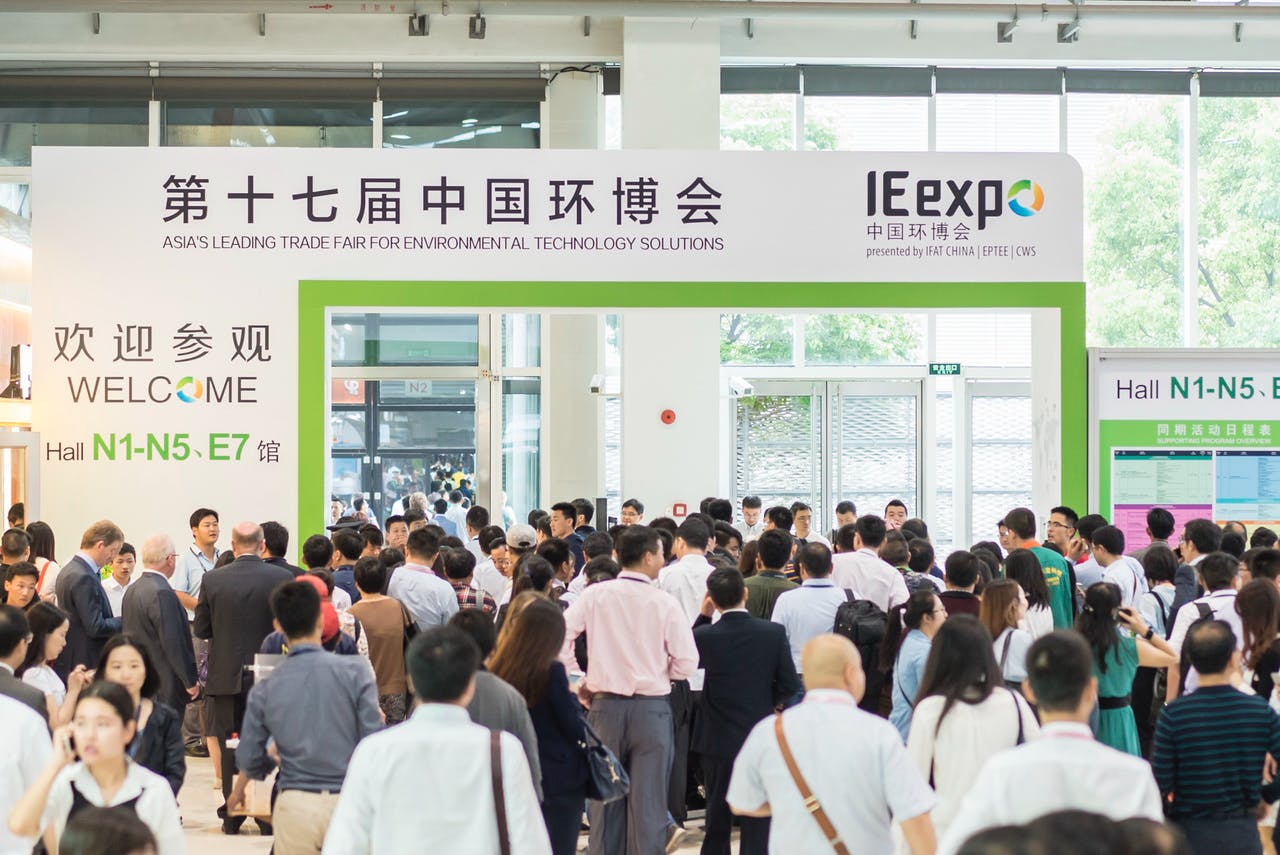 48,000 visitors from 30 countries are expected to attend IE expo China at the Shanghai New International Expo Centre from 4-6 May. Image: IE expo 2016

One of the world leaders in environmental technology is Germany, a country with the highest recycling rate in Europe. Christine von Lonski, managing director of German Water Partnership says that IE expo China is a “compulsory date” for her organisation, which exports German water management expertise.

“There is great trust in German technologies in China, especially in the fields of environment and recycling,” she says. “Germany and China are already important trading partners in the field of sustainable technologies, and China’s demand for sustainable water infrastructure will continue to grow. This is particularly evident at IE expo China.”

Rüdiger Heidebrecht, head of department training and international co-operation at the German Association for Water, Wastewater and Waste, has been attending IE expo China for the last 12 years.

He says that the show’s learning sessions and efforts to meet the expectations of industry has made IE expo China a must-attend event for sustainability executives.

China is looking to collaborate with international experts to tackle its pollution problems. IE expo’s 10 regional and international pavilions will see exhibitors from Japan, South Korea, Taiwan, the United States, Germany, Italy, the Netherlands, Switzerland and – new this year – the European Union and Austria, taking up around 1,500 square meters of exhibition space.

The event’s ‘innovation pavilion’ will see IE expo China partner with Isle Utilities to look at emerging technologies that are suitable for the China market. This pavilion will feature a forum where new technologies are pitched to investors, partners and end-users.

Also new this year is a segment on “sponge cities,” with solutions for how to make China’s flood-prone urban centres - which have rapidly urbanised over the last two decades, as lakes, ponds and canals have made way for buildings - better at absorbing and retaining water.

Counting the cost of pollution

Chaoni Huang, head of business development for natural resource economics firm Trucost, says that clean technology is “key to tackling environmental challenges, alongside effective policies,” and points to the scale of damage being inflicted on society by China’s heavy industries.

China’s cement industry caused US$31.5 billion worth of environmental damage to society in 2013, according to Trucost’s calculations. If air pollution costs were factored into the trading prices of 32 publicly listed cement companies, they would trade 72 per cent higher per tonne, Huang said.

A whiff of the air or sip of the water in most Chinese cities is enough to believe that the task of cleaning them up is impossible. But Wu is upbeat about the future.

“Even though China faces severe, immediate, short-term environmental challenges, I feel optimistic for the mid- to-long term, because of a global consensus around sustainability that China is very much part of.”

The clean tech sector has started to rapidly scale, and Wu says this will not only reduce heavy industry’s enormous environmental footprint, but will also increase China’s environmental handprint - the positive, market-changing drive to sustainability.

Click here to find out more about the environmental solutions in IE expo China 2017 and pre-register for this event.