NTUC FairPrice, one of Singapore's largest supermarket chains, announced that its customers saved 9 million plastic bags last year, resulting in $450,000 worth of 'green' rebates given out by the company.

The company also announced that it was commemorating this year’s Earth Day, which is themed ‘It’s Our Turn to Lead’, by renewing its commitment to setting an example for its partners and customers to adopt sustainable behaviours. Earth Day is celebrated on April 22 annually.

The retailer said that the Green Rewards Scheme - which was launched in 2007 and gives a 10-cent rebate to customers who bring their own bag and spend at least $10 - is one such effort, and has helped saved 46.5 million bags since it began. 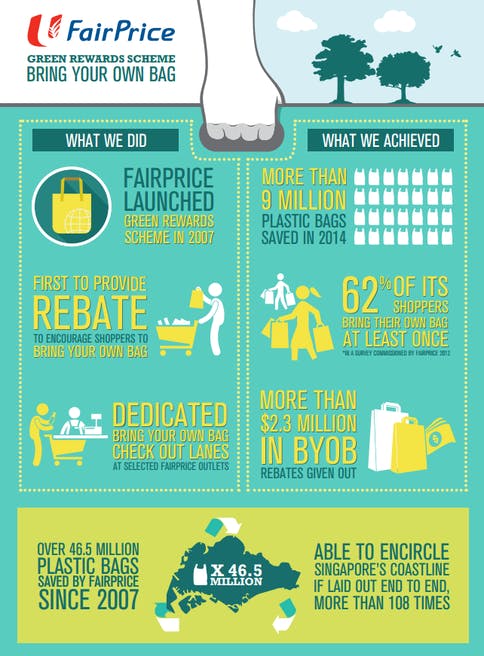 A total of S$2.3 million in rebates have been given out over the past eight years, said FairPrice, adding that the number of plastic bags saved at its stores has increased by about 10 per cent every year. Shoppers at FairPrice supermarkets saved 8 million bags in 2013.

Koh Kok Sin, chairperson of the FairPrice Green Committee, said that securing a sustainable future was a responsibility shared by all.

“We are encouraged that our customers recognise the call to care for the Earth, and share our commitment so save plastic bags and take on other sustainable initaitives,” he said.

We continue to upgrade and make our stores as eco-friendly as possible, find ways to raise environmental consciousness among shoppers, and encourage them to Think Green and Shop Green.

Singapore is a heavy user of plastic bags, with the Straits Times reporting in 2012 that the city-state consumed about 3 billion plastic bags in 2011. This required about 37 million kilogrammes of crude oil and 12 million kg of natural gas.

The issue of whether to reduce plastic bag use by charging for bags has also been hotly debated, with some groups, such as local green group Singapore Environment Council advocating for a nominal fee per bag on weekends, while others insist that these bags are essential for disposing household rubbish hygienically, and should remain free.

FairPrice in 2007 was the first retailer to offer rebates to encourage shoppers to bring their own bags. Since then, other retailers have also begun to engage customers to reduce plastic bag use, including Swedish furniture giant IKEA, which started charging for plastic bags in 2007, and has not provided any plastic bags at check-out since March 2013.

In addition to offering rebates to eco-conscious shoppers, FairPrice also has dedicated check-out lanes for shoppers with their own bags at select outlets, and supports other sustainability initiatives as part of its corporate social responsibility efforts.

During Earth Hour this March, FairPrice switched off all non-essential lights at its stores, offices and warehouses, and donated S$12,500 to the World Wild Fund for Nature (WWF), the group behind the campaign.

“We continue to upgrade and make our stores as eco-friendly as possible, find ways to raise environmental consciousness among shoppers, and encourage them to Think Green and Shop Green,” said Koh.

“We will continue to work together with stakeholders to build a green and eco-friendly Singapore.”