As many as 143 million people in three of the world’s most vulnerable regions could be forced by 2050 to migrate within their own country due to climate change, a new report says.

While such “internal” climate migration is often overlooked compared to international migration, it could lead to new and dangerous risks, the World Bank says.

It covers three areas expected to be significantly affected by internal climate migration: Sub-Saharan Africa, South Asia and Latin America. Together, these regions represent 55 per cent of the developing world’s population.

The report says that while cross-border migration has often tended to capture high-profile global attention, climate change is also expected to be a “potent driver” of internal migration.

In a foreword to the report, Kristalina Georgieva, chief executive of the World Bank, says:

“There is growing recognition among researchers that more people will move within national borders to escape the effects of slow-onset climate change, such as droughts, crop failure, and rising seas…Internal climate migration is a development issue. Unless we act it will become the human face of climate change.”

The report’s worst-case scenario, where little concrete climate and development action is taken, projects that up to 143 million people – around 2.8 per cent of the population of these three regions – could move internally across the three regions due to climate change by 2050. Internal climate migration could also accelerate after 2050 “unless concerted climate and development action is taken”, the report says.

However, this could be reduced to a minimum of 31 million if action is taken to limit climate change and better manage migration, the World Bank says.

The report expects migration would occur from “less viable” areas with lower water availability and crop productivity and from areas affected by rising sea level and storm surges. The World Bank emphasises, however, that its focus on slow-onset climate impacts rather than rapid onset events, such as floods and hurricanes, means its estimates may be at the low end of the likely overall impact of climate change on migration in the three regions.

The report also identifies places which could become several migration hotspots in areas close to national borders, such as Mexico’s Central Plateau, a subregion known for its international migration to the US.

However, climate change can either inhibit or drive cross-border migration, depending on a range of factors that affect the decision of individuals to move, the report says.

The report considers three potential climate and development scenarios, each of which makes projections for the additional internal migrations likely to occur from climate change. It says these scenarios should be seen as “a plausible range of outcomes” rather than precise forecasts.

The map below (left) shows the regions covered by the analysis, while the chart (right) shows the total number of internal climate migrants by 2050 estimated for each of the three scenarios.

As the graph shows, in the “pessimistic” scenario, the number of people migrating internally due to climate change is estimated to reach around 117 million across the three regions covered, but could reach more than 143 million. Under the “more climate friendly” scenario, meanwhile, the findings show internal climate migrants would range from 31 million – the lowest internal migration seen in any of the scenarios –  to 72 million.

All the scenarios in the report project an upward trend of internal climate migration by 2050 in the three regions studied. The chart below shows how the total breaks down among these regions for the three scenarios. 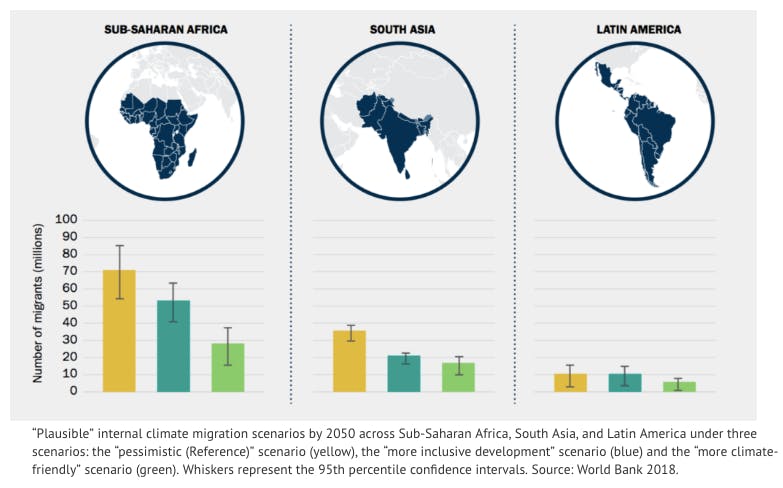 As the chart above shows, Sub-Saharan Africa is the most likely to see people moving internally due to climate change in all three scenarios. Under the most pessimistic scenario, the region could see up to 86 million internal climate migrants by 2050, 60 per cent of the total. South Asia sees up to 40 million internal climate migrations by the same year, while up to 17 million move in Latin America.

“Vulnerable people have the fewest opportunities to adapt locally or to move away from risk and, when moving, often do so as a last resort. Others, even more vulnerable, will be unable to move, trapped in increasingly unviable areas.”

The report projects that climate-driven “hotspots” of outwards migration will be seen in areas increasingly compromised by climate change impact. These include low-lying cities, coastlines vulnerable to sea level rise and areas of high water and agricultural stress. 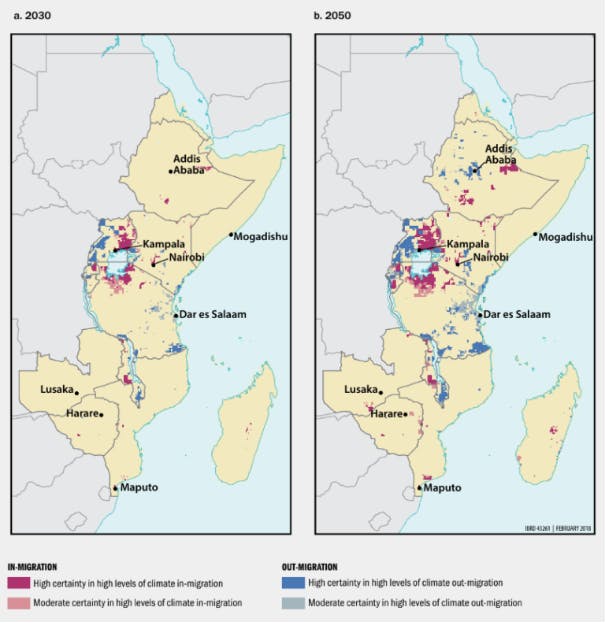 Areas projected to have high levels of migration towards them (“in-migration”) and away from them (“out-migration”, light and dark blue) due to climate change in East Africa by 2030 (left) and 2050 (right). Source: World Bank 2018.

Ethiopia, for example, faces increasing migration due to crop failure and high population growth of up to 85 per cent by 2050. The report finds the northern highlands of Ethiopia around Addis Ababa, its largest city, will see increasing migration outwards up to 2050, as deteriorating water availability and lower crop yields drives people from rainfed cropland areas. Addis Ababa itself could see slower population growth due to its reliance on increasingly unpredictable rainfall, the report says.

The report also projects that the major cities of Dhaka in Bangladesh and Dar es Salaam in Tanzania will see dampened population growth due to rising sea level and storm surges.

Climate “in-migration” hotspots, meanwhile, will be seen in regions with better climatic conditions for agriculture and cities able to provide better livelihood opportunities, the report says. Nairobi in Kenya is one example of this.

The report emphases that these areas will need to ensure they prepare for this incoming migration of people. For instance, they will need to improve housing and transportation infrastructure, social services and employment opportunities. The report adds:

“If well managed, “in-migration” can create positive momentum, including in urban areas which can benefit from agglomeration and economies of scale…Planning and early action could help shape these hotspots: they are not pre-destined.”

However, it also warns that many climate-vulnerable areas will still need to support significant numbers of people. Strategies will be needed to support people to adapt locally in areas “where it makes sense to do so”. The report says:

“Poverty reduction and social protection programs targeted at rural areas can help to increase adaptive capacity to climate change, potentially reducing the need for people to move under distress.”

Such strategies could include a range of actions, from investing in climate-smart infrastructure to diversifying the way people generate income and empowering women, the report says.

Ethiopia, for instance, would need to plan for a more diversified economy, absorbing labour into non-agricultural and less climate-sensitive sectors, the report says.

The report argues that migration can be a “sensible climate change adaptation strategy” – if it is managed carefully and supported by good development policies and targeted investments.

The World Bank is not the first to put forward this view. In a guest post for Carbon Brief last year, Miyuki Hino, a doctoral student at Stanford University, outlined how novel approaches to adapting to climate risks, such as “managed retreat”, may in some cases prove necessary or preferable to infrastructure changes as climate impacts begin to hit.

In a Nature Climate Change study, Hino and her coauthors estimated around 1.3 million people had been relocated through managed retreat in response to natural hazards over the past three decades. However, she said, this “pales in comparison to how many people could be displaced by climate change this century”.

In Bangladesh, for example, a country which the report says could have more internal climate migrants than other types of internal migrants by 2050, saltwater entering into drinking water supplies due, in part, to sea level rise is already affecting the health of 20 million people in coastal Bangladesh. The World Bank says:

“Where there is no credible long-term pathway to viable livelihoods, there is a risk that people will be induced to remain in places where conditions are deteriorating.”

The Bangladesh government’s Perspective Plan for 2041, which factors in climate change as a driver of future migration, already recognises migration as a potential adaptation option for people living in the most vulnerable areas.

However, Alex Randall, coordinator of the Climate and Migration Coalition, says that while it is encouraging to see the idea of migration as a form of climate adaptation being advocated, some caution is needed. He tells Carbon Brief:

This idea can’t become a “get out”. We can’t start saying – “these people can migrate as their way of adapting so we’ll leave them to it”. If this is really going to become a method of adaptation it will need funding and assistance.

There is a real need to focus on the rights of people displaced internally…It’s true that migration can be a powerful tool for adaptation and development, but in the rush to harness this governments must remember that the rights of displaced people and migrants are a matter of various internal laws and norms.