Even in Southeast Asia, coal is losing its lustre—only Indonesia has been building new plants in 2019

New coal plant development in Southeast Asia is down for the second year in a row, a new report from Global Energy Monitor has revealed. Could this herald the transition to clean energy for the world's most climate-vulnerable region?

Southeast Asia is the only region in the world where coal has a growing share in the energy mix. But according to new data from San Francisco-based non-governmental organisation Global Energy Monitor (GEM) the signs are that the coal industry is on the wane, even here.

In the first six months of this year, only Indonesia, the world’s fifth biggest producer of the fossil fuel, started to build new coal-fired power plants.

This year is shaping up to be the second in succession in which the regional coal pipeline has narrowed, with 1,500 megawatts (MW) worth of coal power being built in the first half of 2019, after only 2,744 MW entered construction in 2018.

Southeast Asia is home to three of the world’s 10 largest coal power pipelines, but the low rate of new construction suggests that much of this capacity will not be realised, GEM concluded in its report, More fizz than boom. 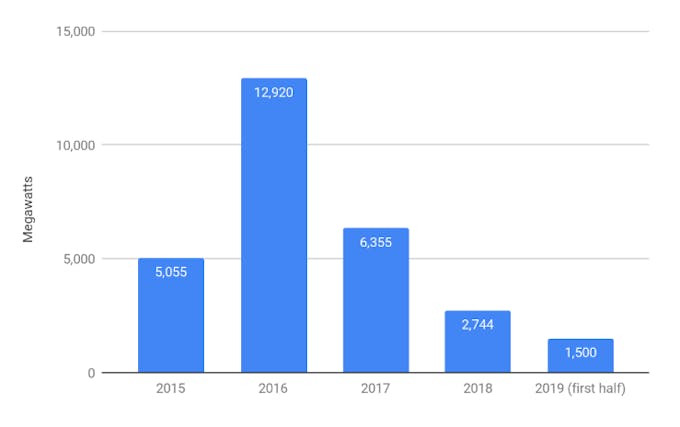 Not only is the building of coal plants in decline in Southeast Asia, but the number of plants in the pre-construction stage also continues to fall, declining by 52 per cent between mid-2015 and mid-2019, according to GEM data.

With so few coal projects progressing from pre-construction to construction, if recent trends continue, the report’s authors believe that most of the 53,510 MW in pre-construction is more likely to be cancelled than be built.

Commenting on the data, Ted Nace, executive director of GEM, said that new construction is “the acid test of whether a proposed project is real or just some plans on paper”.

“To go into construction you have to get someone to commit hundreds of millions of dollars. In Southeast Asia, it looks like it’s becoming a difficult case to convince people to commit that kind of money,” he said.

Less enthusiasm for new coal in Southeast Asia is reflected in the reluctance of the region’s banks to fund new plants. In a significant 11 days for coal financing in May this year, all of Southeast Asia’s biggest three banks, Singapore’s OCBC, DBS and UOB, declared that they would stop coal funding after a period of sustained pressure from environmental groups.

The region’s banks have responded to a global shift away from coal financing, with more than 100 institutions worldwide helping to effect a 20 per cent drop in newly completed coal plants last year.

Though Indonesia stands out this year as Southeast Asia’s only big supporter of new coal, a fall in prices of the commodity prompted Indonesian president Joko Widodo to signal that the country may begin to move away from coal towards renewable energy.

“Coal power is facing something of a perfect storm,” said Christine Shearer, director of GEM’s coal programme. “Communities are rejecting it due to the high levels of pollution, renewable energy technology is undercutting it in terms of quality and cost, and financial institutions are backing away fast, making funding an increasing challenge for coal proponents.”

Burning coal for energy is the single biggest contributor to man-made greenhouse gas emissions, and yet use of the fossil fuel is predicted to double to make up 40 per cent of the energy mix in Southeast Asia—one of the world’s most climate-vulnerable regions—by 2040.