Do young advertising and PR executives in Asia mind working for big polluters?

A survey of advertising and PR executives in Australia finds discomfort among young people asked to create campaigns for big polluters. But how pervasive are these views elsewhere in a region still heavily dependent on fossil fuels?

Young people in the advertising and public relations industry in Australia are reluctant to work on fossil fuel accounts, and are actively seeking out jobs in agencies whose climate ambition matches their own, a new study has found.

A survey of more than 200 people aged 30 or under by CommsDeclare, an industry volunteer group campaigning for agencies to stop working for the world’s biggest atmospheric polluters, found that about a third of young people agree or strongly agree that agencies should refuse to work for companies involved in the production of fossil fuel.

Fossil fuels companies are among the biggest spenders on advertising to promote the green credentials of their brands, as pressure mounts on big polluters to show that they are responding to the climate crisis by making genuine commitments to rein in their emissions.

Over a third (38 per cent) of young job-seekers are actively looking to work for an agency with strong climate credentials. The same proportion said that they are reluctant to work for agencies that are doing little to respond to the climate crisis.

About a third of respondents, surveyed between September and November, said they had worked for fossil fuel-based energy brands, lobby groups, petrol or oil retail outlets, or companies that cut down trees for agriculture over the past 12 months.

I’ve never been asked by a young candidate [in Singapore] about whether we work for carbon-intensive clients. Young people here care more about money, perks and working hours. 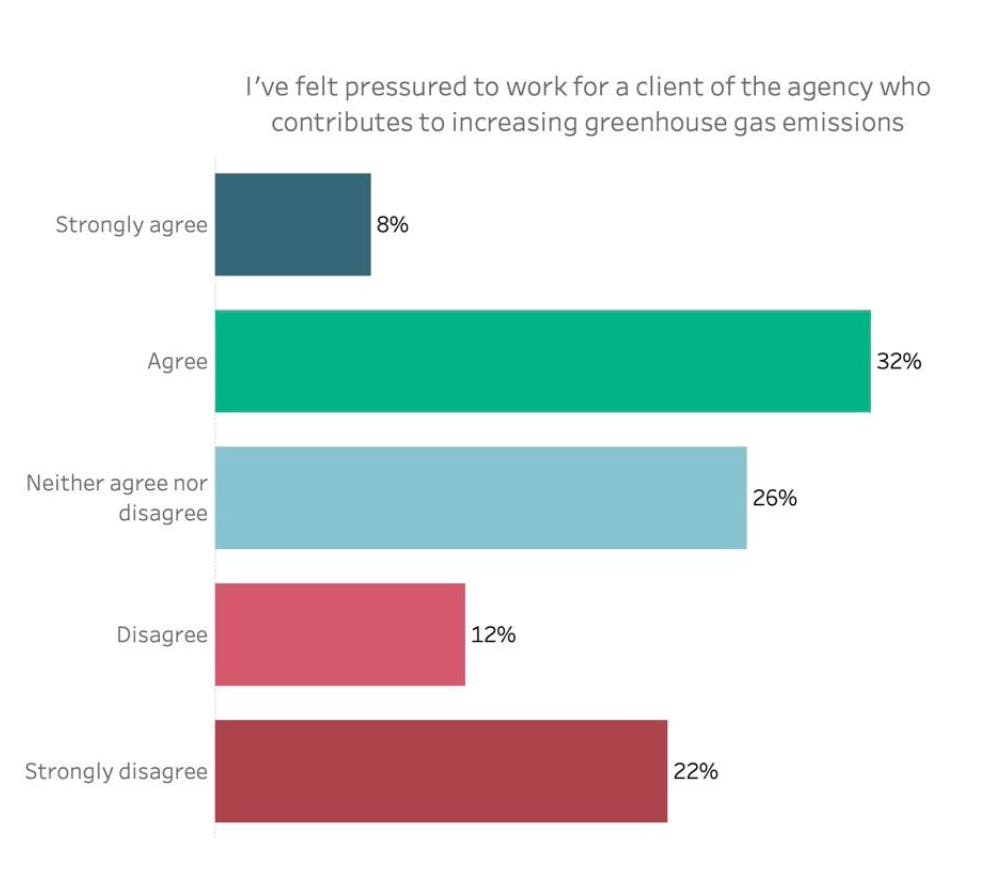 Some said that they felt pressured by their agency to work on brands that generate high greenhouse gas emissions.

Agencies are under increasing pressure to be accountable for the social and environmental impact of the campaigns they create for their clients, which are themselves ratching up climate action by scrutinising the emissions of their suppliers.

A report published by Comms Declare and Clean Creatives, an advocacy group in the United States, said that even the smallest of promotions to boost the sales of fossil fuels clients undermines any commitment an agency makes to decarbonise its own operations.

Comms Declare has persuaded 320 marketing, PR, advertising and media professionals in Australia to pledge to not work for fossil fuel clients. It has also persuaded 80 agencies to make a no-dirty energy clients commitment. The biggest agencies that hold the major fossil fuels accounts, which include ExxonMobil, Shell, Chevron and BP, have not made the pledge.

What do young Asian creative types really care about?

Many of these big accounts have a large footprint in Asia Pacific, and are hard to resist for aspiring advertising executives as they are among the most well-resourced and creatively rewarding. In Malaysia, the short films produced for oil and gas giant Petronas to mark special occasions have won domestic and international acclaim for widely-revered creators, such as the late Yasmin Ahmad. Her film Tan Hong Ming in Love, which aimed to show that “love is colour blind” to mark National Day, won numerous awards for Petronas in 2007.

“Generally, business students want to work with the industries that excite them, mass communications students care about work culture, and engineering students joining the media industry are somewhat concerned [about climate change]. Petronas still attracts the brightest students into their organisation, and it is a key account for young advertising talent,” he said.

Suzy Goulding, director of public relations firm Mullen Lowe Singapore, which launched a sustainability practice last year, said that while young people in Asia are becoming more aware of sustainability issues and may feel strongly about climate change, whether they have the freedom to choose which accounts they work on depends on company culture.

“Many companies in the region are still quite hierarchical organisations and a young, junior person may not feel they are able to voice an opinion or take a stance on issues like this — at least not to the point of refusing to work on such [fossil fuel] accounts,” she said.

Fiona Bartholomeusz, managing director of Formul8, a mid-sized Singapore marketing agency that has worked for clients including automakers BMW and Jeep, real estate developer CapitaLand and the Ministry of National Development, told Eco-Business that she has never been asked by young interviewees about her agency’s stance on climate, or whether her agency works for big polluters.

“Young people here [in Singapore] care more about money, perks and working hours — and very clearly so,” she said.

Lee Anne, a freelance graphic designer in Singapore who once sent a bridge-burning email to a local airline client who asked for an illustration of a tourist riding an elephant, said that during her time in agencies, the majority were “blind or chose to be apathetic” to issues to do with climate change, taking the ‘it doesn’t affect me, so why should I care about it’ view. The few who could see that promoting fossil fuels is problematic, “bit their tongues and went with the flow because they needed the jobs,” she said.

Jung Hyuck Choi, a Seoul-based 29 year-old engagement manager at Media.Monks, a digital production company aiming for B Corp certification that has e-retailer Amazon, bike brand Harley-Davidson, and consumer goods firm Mondelez among its clients, has a pragmatic take on the role of agencies in the climate conversation. He believes that agencies should be neutral, and avoid taking any stance on climate that might alienate staff, or be in conflict with the interests of clients.

“I think it is admirable to stand up for your beliefs. But there is a certain amount of sacrifice an employee should commit to when they join an organisation. Doing a job that goes against your personal beliefs but benefits the company is a dilemma everyone has to deal with,” he said.

But before long, agencies will have to think harder about working for high-carbon clients, as rules emerge to clamp down on advertising what some industry-watchers are calling “the new tobacco”. In some countries, fossil fuel advertising may soon come with a tobacco-style public health warning, oil majors are being sued for greenwashing their products, and some academics are calling for fossil fuels ads to be banned.

“Soon it will not be a choice, but a need for people stay away from fossil fuel industries, as the impacts of the climate emergency get more apparent. Competition for talent is already intense in the comms and PR industry,” said Janissa Ng, senior account director for Singapore PR firm Spurwing Communications, which has Johnson & Johnson, Bayer, and Syngenta on its roster.

“The changing demands of the future talent pool, combined with the opportunities of a rapidly growing regional market in renewables and other green industries, makes a compelling case for agencies to get serious with making climate commitments a part of their business,” she told Eco-Business.