Air purification is big business. But it's hard to prove that air-cleaning products actually work. Many are not as effective as they claim. Eco-Business asked air pollution epidemiologist Dr Vivian Pun to assess six products that claim they can clean the air.

In 2019, US$12 billion was spent on air filtration devices, and the market is growing by 7 per cent annually as humanity reaches for solutions to a problem that kills three times the number of people every year than have died from the Covid-19 coronavirus as of February 2021.

The market for air quality monitoring systems is growing at 6 per cent a year, and is projected to reach US$6 billion by 2025 as awareness of the environmental and health implications of air pollution grows, and air quality becomes an issue that more people feel they need to take seriously.

With money to be made from protecting people against air pollution, a growing number of products have entered the market in recent years claiming they can clean the air. As air pollution is usually invisible, it’s hard to prove that these devices actually work. Eco-Business has identified a number of these products and has run them by a public health expert to gauge their effectiveness.

Dr Vivian Pun is an air pollution epidemiologist for Vital Strategies, a civic society group that campaigns for better air quality. She said that while the following products may be effective in absorbing selected pollutants, they do nothing to improve air quality. “A more sustainable solution would be to focus on reducing leading sources of air pollution emissions,” she said.

Here are six products that claim to clean the air:

The RepAir t-shirt, designed by Italian underwear maker Kloters, was marketed as an air-cleaning garment that can suck the emissions of two cars out of the atmosphere when it launched in 2018. A carbon mesh filter inserted into the t-shirt’s breast pocket can supposedly absorb pollutants and release clean air. The pocket filter, called The Breath, lasts for six months before it needs replacing. The RepAir t-shirt retails for €39 (US$46). 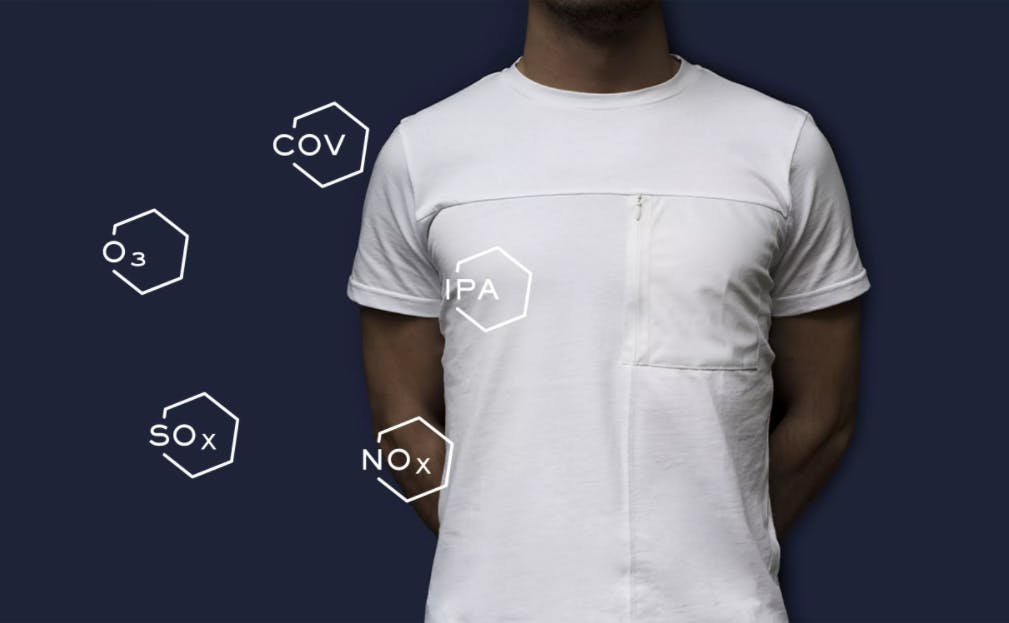 Dr Pun is sceptical of claims that garments have pollution-busting powers. All clothing absorbs some air pollutants, and the amount of pollutants they can trap has virtually no impact on the air that wearers breathe in, she said. She noted that it is unclear what materials are used to coat the RepAir fabric. “A better solution is to eliminate air pollution emission sources in the first place,” she said.

The ‘Nosy’ nose-mounted air filter hit the market in May 2020, a few months after the Covid-19 outbreak was declared a pandemic. It was billed as a fashionable, sustainable alternative to disposable face masks, which Nosy’s creators say are ineffective because they do not have a perfect seal around the face. 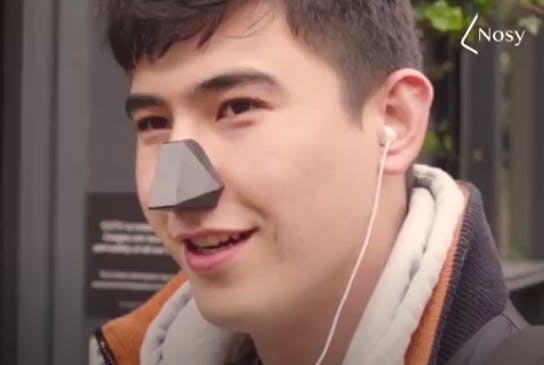 A promotion for Nosy, which is raising funds through Kickstarter. Image: Nosy

Inside the Nosy are two filters to remove fine particles and volatile organic compounds (VOCs). The contraption’s creators claim that it can filter 90 per cent of all air the user breathes. There’s one catch though. What if the user breathes through their mouth? This is likely because a High Efficiency Particulate Air Filter (HEPA), which Nosy uses, may be quite difficult to breathe through, said Dr Pun.

Some plants are famous for their indoor air purifying qualities. Spider plants, English ivy and chrysanthemums are known to be able to remove some toxins, dust and germs from the air.. But the Botanicaire Air Detoxifier is something of an air purification superhero. 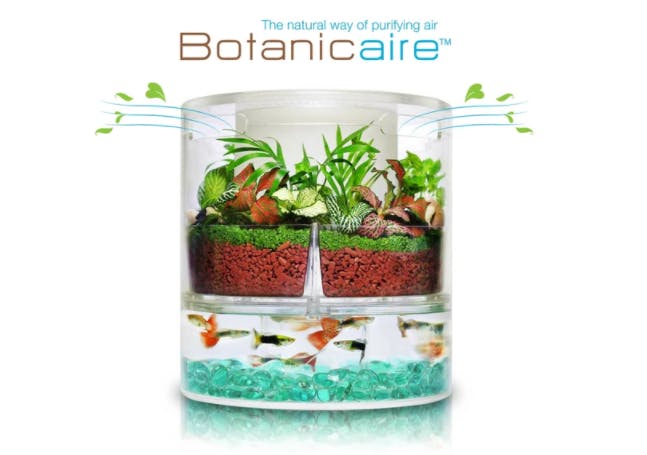 The device uses special bacteria known as Nuvoc microbes, which can clear 99 per cent of indoor air contaminants within a 19-square-metre area in under an hour, according to its maker, In Vitro, a Singaporean firm. Besides sucking pollutants out of the air, the plant arrangement can also target toxic gases, they claim.

Dr Pun said that while lab research indicates that plants have a “limited ability” to lower concentrations of certain gases and chemicals from indoor air, they do not filter or remove particulate matter, a highly harmful pollutant. “The amount of indoor air purified by a few plants in complex environments like offices is negligible compared to the amount of air that circulates in any indoor environment,” she added.

Swedish furniture retailer IKEA launched a range of air-purifying curtains at the start of this year for S$49.90 (US$36.60). The magic of the air-cleaning curtain apparently comes from a special coating. It contains a mineral-based photocatalyst called Gunrid that can break down harmful pollutants into less harmful pollutants when activated by light, according to IKEA’s product developer. 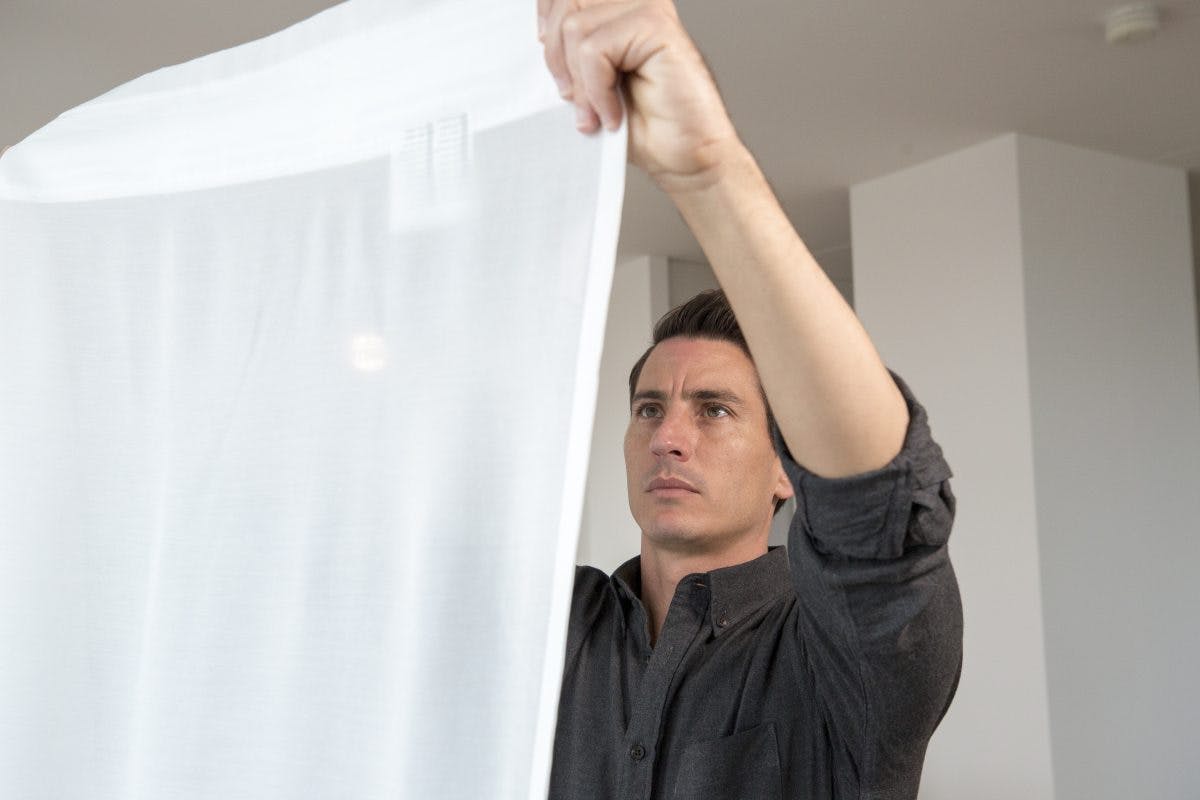 Dr Pun noted that all curtains hung in front of an open window absorb some pollutants — that’s why they get dirty. She said a photocatalyst could nix some nasties in the air, but research has shown it may be ineffective against others. The most useful function of the Gunrid curtain was to raise awareness of indoor air pollution, she said.

Paint that cleans the air

Singapore firm Gush claims that its paint purifies the air. The paint does this, the company says, with a solution called the Gush proprietary catalyst, which interacts with oxygen and water vapour in the air to form “radical agents” on the paint’s surface. These agents break down volatile organic compounds (VOCs) into harmless byproducts, Gush claims. 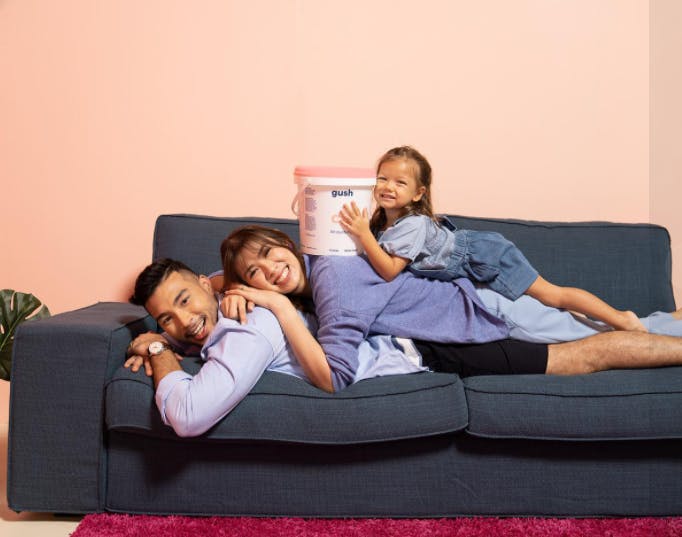 A promotion image for Gush Paint. Image: Gush on Facebook

Dr Pun noted that while certain types of paint may neutralise some VOCs, the rate at which they do this is miniscule compared to the effects of simple ventilation of a musty room. Claims that paint purifies the air may give people a false sense of protection, she said.

The Purion eco wall, which is a feature wall, functions as an air filter, “giving you peace of mind knowing your children can enjoy better air quality and well-being at home”, claims Singapore company Purion. The eco wall contains a “wellness material” called diatomite, which is porous and can absorb moisture and harmful compounds from the air, the firm claims. 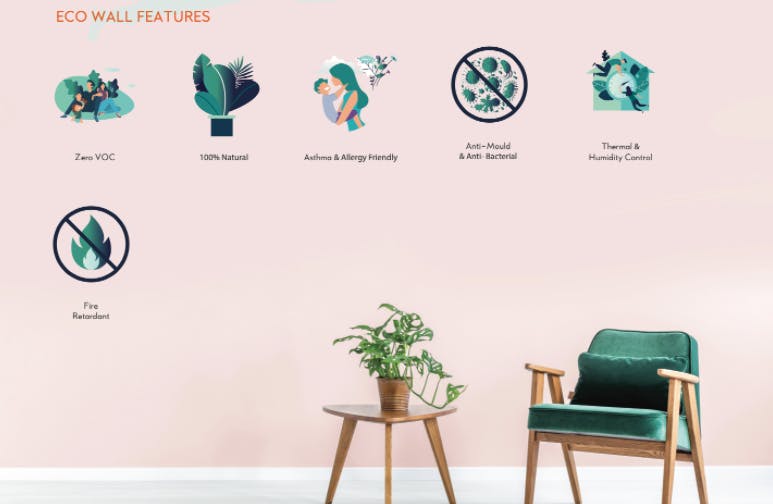 Purion claims its eco wall functions as an air filter and is asthma and allergy friendly, anti-mould and anti-bacterial, and contains no volatile organic compounds (VOCs). Image: Purion

Dr Pun said that while diatomite may absorb a small amount of pollutants, it does not stop people from being exposed to indoor air pollution and may lead to a false sense of security about the cleanliness of the air they’re breathing.

“Fundamentally, each of these products have the same issues: they have no impact on the air that people actually breathe. All surfaces could be said to clean the air; that’s why they get dirty. But that does not mean they will change the nature of breathable air,” she said.