Disrupt your business model to take action on climate change

At the end of the 19th Century, people were concerned about a very different environmental issue than today – horse manure.

There were projections about New York and London being buried in six feet of horse manure and conferences on “adaptation and mitigation” were a common occurrence.

Yet, within a decade, the problem was solved when the automobile puttered its way onto the scene and upended traditional notions of transportation, without the need for any international conventions.

Innovation – and its bedfellow disruption – is how businesses today can take action on climate change.

Sharing this example at a panel discussion at the Responsible Business Forum in Singapore in late November was Ingo Puhl, director of strategy and co-founder of emission reduction project developer South Pole Group.

In the same way that automobiles offered an out-of-the-box solution and a more attractive future in transportation, the messaging behind tackling climate change needs to be about how “these solutions make life more pleasant and liveable, and meets our needs in a better way”, said Puhl.

The panel discussion was part of a workshop focused on Sustainable Development Goal 13: Take urgent action to combat climate change and its impacts.

Puhl challenged the audience and fellow panellists to innovate, check their existing assumptions, and grab new opportunities in the fight to address climate change.

Businesses need to start thinking that climate change action is an opportunity for us to gain, let’s do this.

He pointed out that there is already a shift in the way businesses are taking climate action today – from an entity-centric model, in which specific agencies or departments would be tasked with taking eco-friendly action, to one where the desired results are the starting point around which suppliers and partners are then organised.

“The business of creating impact now becomes a value chain and we deliver impact like we deliver a product,” Puhl said, adding that this was “much more efficient”.

One company that has done that is American carpet tile manufacturer Interface, which aims to have a “restorative” impact on the environment through its business.

According to Interface’s chief sustainability officer, Erin Meezan, who was also on the panel, the company’s senior management team was nervous about telling clients that part of the business agenda would be to reverse climate change because “we were afraid they were going to think we were insane and that the ambition level was too high”. More importantly, Interface itself did not know how it was going to achieve it.

But the company outlined its objective to make products that would sequester rather than emit carbon in manufacturing, Meezan said, and when it began sourcing for ways to bring its vision to life, it found the kinds of partners and solutions it was looking for.

Since 2012, Interface and partners such as the Zoological Society of London have been running the Net-Works programme, which collects discarded fishing nets in coastal communities in the Philippines and Cameroon that are then processed into yarn used in the creation of Interface’s carpet tiles.

Interface was able to innovate because it changed the ambition, set the goal, and looked in a different direction, and found solutions and options it did not know existed, said Meezan.

Through its Net-Works programme, which was aimed at affecting action on climate change, Interface has also managed to make headway on related SDGs like number 14, Life under water, as discarded nets never enter the ocean where they can do harm, and number 12, Responsible consumption and production, by ensuring that it creates its products in the most sustainable way possible.

While companies can take the lead in implementing sustainability within their own business operations – with firms such as Interface pledging to reverse climate change on top of a do-no-harm approach – national governments can also actively encourage the private sector to go green.

Chris Dharmakirti, the executive director of strategic enterprise management agency from the President’s Office of Sri Lanka, used the example of a company that started fashioning little cloth bags out of old saris as a result of the government’s year-old ban of plastic bags to illustrate how the government can intervene in market economics to encourage opportunities to become more sustainable.

Meezan also added that governments could do more besides regulate and provide subsidies. “There’s a huge role for government in setting the foundation for conversations and outreach, and levelling the playing field by sharing the best practices in an industry,” she said.

“The government could also do much more to set expectations of business and what they expect businesses to contribute to the goals.” 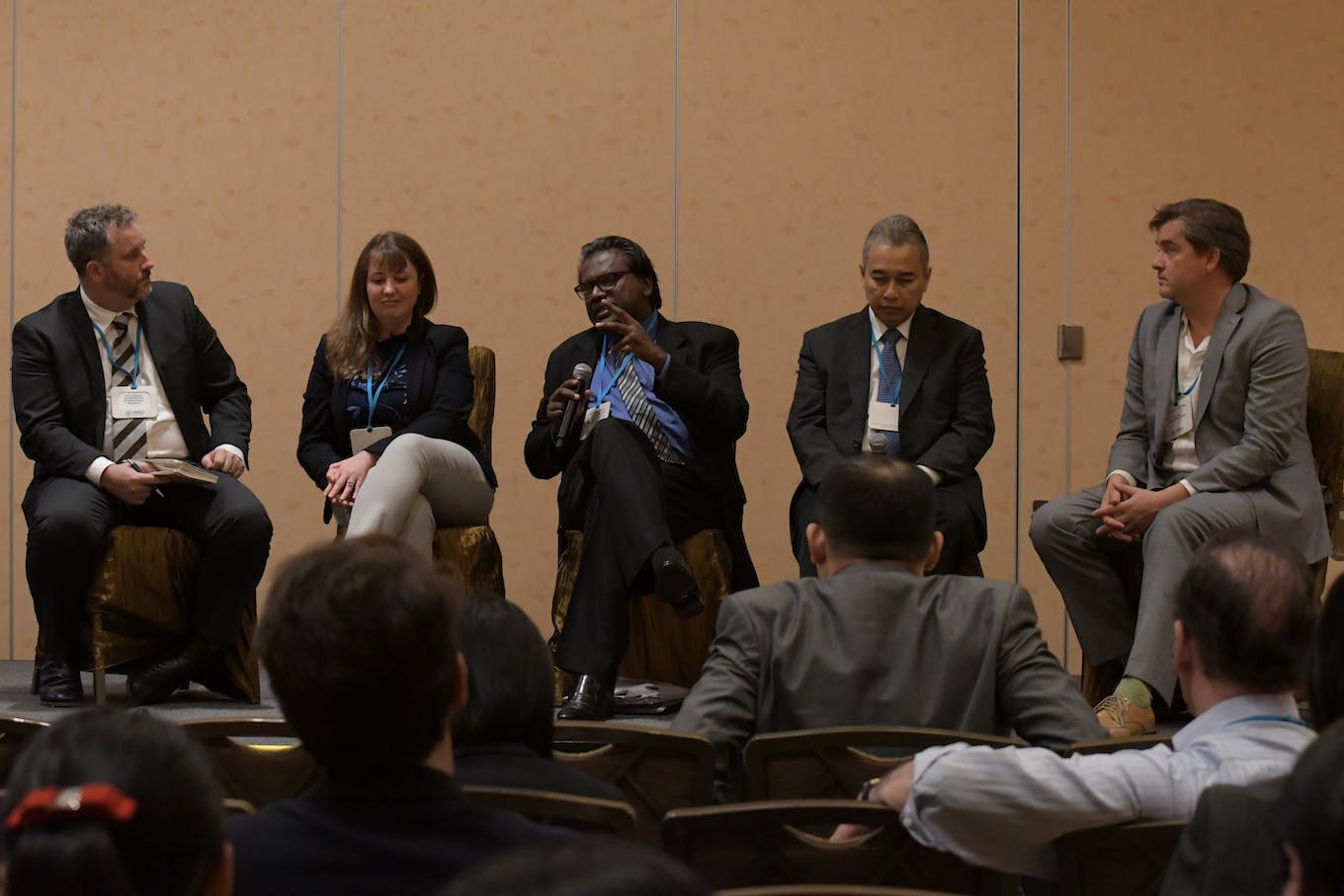 Her thoughts were echoed by fellow panellist Agus Purnomo, managing director for sustainability and strategic stakeholder engagement at the Indonesian palm oil company Golden-Agri Resources. On the forest fires in Indonesia, he said that while the company was “doing what we can to prevent fires in the surrounding areas”, it could not do anything about the fires lit further away.

Burning is a common method of clearing land in Indonesia, especially among smallholder oil palm farmers. The crop is processed into palm oil, a valuable commodity that is widely used in manufacturing. Most oil palm is grown on peat soil, which is water logged in its natural state and must be drained before cultivation.

When farmers use fire to clear land, not only does the burning vegetation release greenhouse gases, peat is also extremely flammable when dry and fires can continue burning several metres below the surface of the land, making them difficult to extinguish.

The Indonesian government coordinated joint patrols during the burning season in March to detect fires and educate the population on fire prevention. President Joko Widodo also set up a peatland restoration agency to restore about 2 million hectares of carbon-rich peatland damaged by the fires.

However, Puhl said that there also needs to be a mindset change within the private sector. Rather than waiting for other stakeholders or saying “it’s going to cost so much”, Puhl said businesses need to start thinking “this is an opportunity for us to gain, let’s do this”.