The use of fossil fuel, particularly coal and oil, must decline “sharply” if the world is to meet the goals of the Paris accord, according to a new report backed by energy giants Shell and BHP Billiton.

Global coal use must be cut by 70 per cent within 25 years, oil use must fall 30 per cent and gas can increase by only 2 per cent out to 2040. The growing global population will instead get its energy from a huge expansion of renewables, combined with more efficient energy use and other low-carbon technologies.

Those are the conclusions of the Energy Transitions Commission, a group set up in 2013 by a cross-section of major firms, NGOs and academics. Its conclusions broadly align with other pathways for 2C and below, but the commission’s membership adds an interesting twist to the findings.

The commission’s report sets out a pathway to keeping temperatures well-below 2C above pre-industrial temperatures, in line with the less ambitious end of the Paris Agreement on climate change. It says this path is hugely challenging, but that it is “technically and economically possible”, and that it would bring “important additional social benefits…and economic opportunities”.

The key elements of this pathway include wind and solar supplying 45 per cent of the world’s power by 2040, with a further 35 per cent coming from other zero-carbon sources, including nuclear and hydro.

This near-100 per cent renewable system would cost $70 per megawatt hour (MWh), the report says, allowing renewables to be “fully cost-competitive with fossil fuels, allowing for all necessary flexibility and back-up costs”.

The real problem is not modelling a technological and economic pathway to 2C. There are lots of different ways to do that…But unless you say how you think you can solve the political problems of doing that, it’s just an interesting academic exercise.

It includes a $30/MWh system cost to provide backup for variable renewables and the flexibility to accommodate their use. It says this cost is “likely to be conservative…[and] could be significantly reduced,” if demand management and grid integration is improved.

The falling costs of renewables means that increasing shares of overall energy use could be decarbonised through electrification, the report says. Around 10 to 20 per cent of fossil fuel use could be eliminated in this way, using electric vehicles and heating.

Across the global economy, a “step change in energy productivity” is required, with improvements in the amount of energy needed to generate wealth rising from 1.7 per cent per year to 3 per cent. To achieve this “energy productivity revolution”, more efficient devices and vehicles will have to be combined with deeper structural change, such as more efficient urban design.

Global energy-related CO2 emissions would fall, under these conditions, from 37bn tonnes today to just 20bn tonnes in 2040. After that, the commission adds, they would fall to net-zero later this century.

The net result of all these shifts is that fossil-fuel investment needs would be cut “dramatically” by $175bn per year below business-as-usual levels, with low-carbon investment increased by $300bn/yr and investment in buildings and efficiency rising $900bn/yr.

Investment in fossil-fuel extraction would fall a third, from $12.5tn to $8.8tn per year in 2030, and in new fossil power plants by two-thirds, from $3tn to $1tn. Fossil-fuel use would fall by 30 to 50 per cent by 2040, depending on the availability of carbon capture and storage (CCS).

For coal, there must be an immediate decline in global use and a phaseout as soon as possible in rich nations, to achieve an overall 70 per cent cut by 2040. Oil use should peak in the 2020s and fall 30 per cent by 2040. Only gas use would increase, by a tiny 2 per cent over the next 25 years. 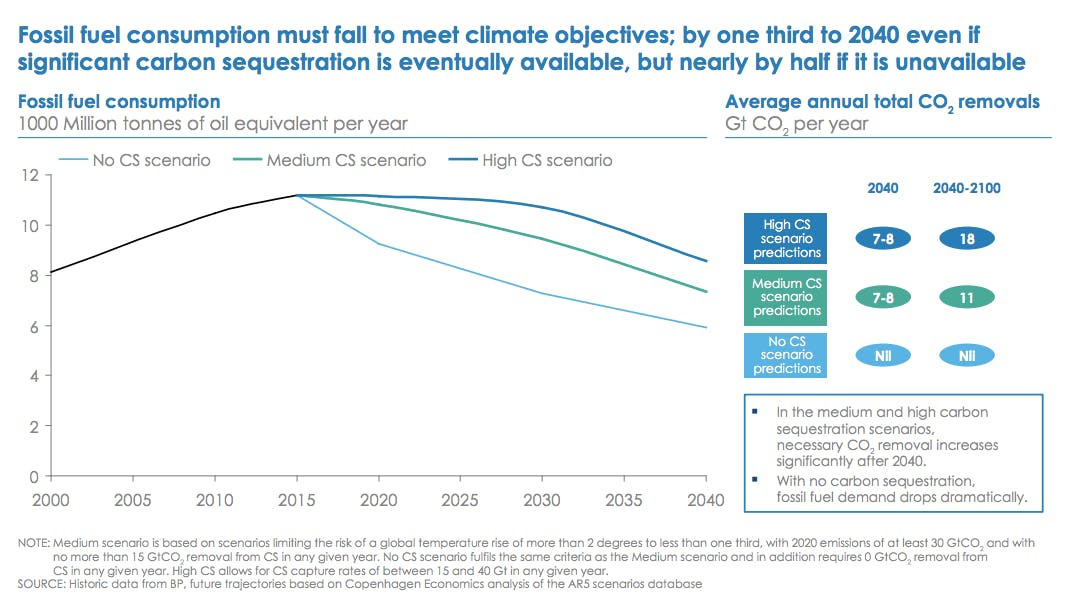 CCS is often portrayed as a way to increase the lifetime of fossil-fuel assets, particularly coal-fired power. While CCS has a significant role in the commission’s pathway, however, it is primarily used to tackle industrial emissions rather than for coal- or gas-fired power stations.

The broad outlines of the the Energy Transition Commission’s pathway is familiar, even as some of the details are different. Here, coal use would fall by 70 per cent in 2040. In the International Energy Agency’s 2C scenario, it is 50 per cent. Both see oil use decline to 2040, with only small increases in gas.

Despite the scale of the challenge, the Energy Transitions Commission is confident that this transition is technically and economically possible, and that it would deliver important additional social benefits – with, for instance, dramatically improved local air quality leading to longer and healthier lives – and economic opportunities – related to the development of new industries and business models.

What the report does not explain is how these “technically and economically possible” changes will be brought about. For example, it advocates a global carbon price starting at $50 per tonne in the 2020s and rising to $100 in the 2030s, to pick just one of many politically challenging aims.

The commission’s report “makes no effort to set its findings in a real-world context, where the main problems are the politics of transition not the economics or technology,” Tom Burke, chair of thinktank E3G, tells Carbon Brief. He says:

The real problem is not modelling a technological and economic pathway to 2C. There are lots of different ways to do that…But unless you say how you think you can solve the political problems of doing that, it’s just an interesting academic exercise. This would have been really groundbreaking if it had come out before Paris, two, three years ago. Now, it’s pretty much par for the course.

What it does do, which is useful and positive, is it sets the bar for where the conventional wisdom is, amongst people who actually understand something about the energy problem…The people who are not getting that message are the politicians.

People who know the energy business won’t argue with this. The people who will argue with this are politicians, who just don’t understand the level of change that’s going on.

In this context, the commission’s mainstream membership is instructive. It is backed by a group of 28 “commissioners”, including representatives of investment firm BlackRock, mining giant BHP Billiton, HSBC bank, oil major Shell and the utility firm General Electric.

Shell, for one, has long struggled to produce pathways compatible with a 2C world. Even if this report falls short of a comprehensive recipe for reaching that goal, it still represents something of a progression.

In short, some of the world’s largest energy firms now agree that it is not only technically and economically possible, but also offers economic opportunities to move move towards a low-carbon future.

It’s worth noting, in conclusion, that the commission members do not necessarily agree with every detail of the report: