Covid restrictions led to better air quality in 2020, but wildfires and sandstorms choked parts of the US, Australia and Thailand, a global air quality study has found. Pollution is expected to rebound in 2021 as economic activity picks up.

The pandemic-induced economic slowdown led to considerably better air quality almost everywhere in 2020, but climate-related calamities such as wildfires and sandstorms made air pollution much worse in parts of Thailand, Australia, the United States and China, according to an annual study of particulate pollution.

In South and Southeast Asia, where air quality has been deteriorating in recent years due to a toxic mix of urbanisation, fossil fuels combustion and agricultural burning; lockdowns and movement restrictions helped ease smog last year; 84 per cent of countries and 65 per cent of cities monitored in the World Air Quality Report experienced cleaner air in the year of the Covid-19 coronavirus outbreak.

Some of the biggest improvements in air quality were felt in Asia, the world’s smoggiest region. Air pollution dropped by 11 per cent in Beijing, 14 per cent in Tokyo, 15 per cent in Delhi, 19 per cent in Hanoi, 20 per cent in Jakarta, and 39 per cent in Singapore—which had the sharpest drop in smog in the study.

Lockdown measures and a rainy year relatively free from transboundary haze from burning Indonesian peatlands explained Singapore’s much-improved air quality in 2020. Although that looks set to change, with reports that warmer, drier climatic conditions could mean an earlier dry season and a heavier haze in 2021.

Climate change ensured that the benefits of better air were not evenly distributed in 2020, which was the hottest year on record. Severe wildfires in California meant that North America was the only region globally to suffer a decline in air quality in 2020, while Hotan in northwestern China was last year’s most polluted city, largely due to sandstorms exacerbated by climate change, the report noted.

Bush fires in Australia, which raged from June 2019 to March 2020, produced the worst air pollution on record in parts of the country, killing 12 times more people than the fires themselves. Forest fires in northern Thailand produced air pollution of up to 12 times above the level considered safe to breathe by the World Health Organisation (WHO).

While Covid-19 restrictions led to improved air quality in many countries in 2020, some underlying air pollution trends were consistent with 2019 data. Poorer countries in the Global South remain ranked with the worst quality air, and these regions are also where air quality monitoring is most lacking. 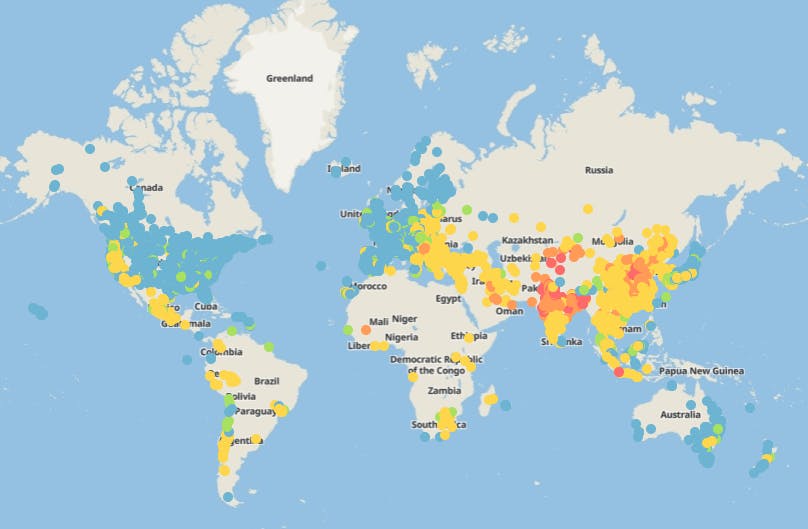 Improved air quality in these places was mainly a result of a steep drop in fossil fuel consumption as economies slowed down, said Lauri Myllyvirta, lead analyst at the Centre for Research on Energy and Clean Air (CREA), which contributed to the report.

As economic activity picks up again in 2021, there will be an increase in air pollution, said Frank Hammes, chief executive of IQAir. This has already happened in some places. Pollution has rebounded in China since the re-opening of the country. Polluting emissions surged by 4 per cent in the second half of 2020, as China’s heavy industry and construction sectors cranked back into gear, and this week Beijing was rated as the world’s most polluted city, with air quality in the “unhealthy” range, made worse by a sandstorm.

The report also showed the possible impact of politics on air quality. For five decades, the Clean Air Act has helped reduce air pollution levels in the United States, even while the economy has grown. But in the first two years of Donald Trump’s presidency, 2016-2018, air pollution in the US increased by 5.5 per cent, with continued reliance on fossil fuels, a lack of enforcement of the Clean Air Act as well as persistent wildfires producing smoggier air.

Air pollution is estimated to cost the global economy about $2.9 trillion per year, and although air quality improved globally in 2020, pollution had economic consequences; Tokyo lost US$43 billion to smog in 2020, Shanghai lost US$19 billion, and Jakarta lost the equivalent of 8.2 per cent of the city’s GDP to poor air quality, according to a February study by Greenpeace and IQAir.

While air quality improved in 2020, it was still lethal. In the world’s five biggest cities, Shanghai, Tokyo, Dehli, Mexico City, and São Paulo, particulate pollution killed 160,000 people prematurely last year. In Delhi, there were 54,000 avoidable deaths due to air pollution last year — more than five times the reported deaths from Covid-19 to date.

New health consequences of air pollution also emerged in 2020. Air pollution is believed to increase susceptibility to Covid-19, and has also been linked to Alzheimer’s disease, reduced fetal growth, depression, and loss of vision.