Among the event’s sponsors are three Polish coal companies, and in his opening speech, Polish president Andrzej Sebastian Duda said his country’s continued use of coal do not go against efforts to tackle climate change.

Joanna Flisowska is a native of the coal-mining city of Katowice in Poland. She says she welcomes her city hosting the latest United Nations climate talks, seen as the most important discussions since the 2015 Paris climate summit.

The city of Katowice grew out of the discovery of rich coal reserves in the area throughout the mid-18th century. Since then, Katowice and its surrounding areas have turned into a major coal production centre, home to around half of all the coal workers and the biggest coal company in the European.

The irony of a coal city hosting a summit on climate change isn’t lost on Flisowska, a coal policy coordinator at Climate Action Network (CAN) Europe. Instead, she sees it as an opportunity to take a stand.

“We can be such a bright example for the transition away from coal if only we could put effort into using these opportunities,” she told Mongabay at the climate talks.

The burning of coal accounts for almost half of global energy-related carbon dioxide emissions. And Poland generates 80 per cent of its energy from coal. It’s the 10th-largest consumer of the fossil fuel in the world, and the second-biggest in the EU, after Germany.

The use of our natural resources, that is coal in case of Poland, and relying our energy security on these resources isn’t contradictory to climate protection.

So it was little surprise that the Katowice summit’s host, Polish President Andrzej Sebastian Duda, used his opening speech on December 3 to declare that his nation’s dependence on coal doesn’t go against global efforts to combat global warming.

Duda added that there were no immediate plans for Poland to stop burning coal.

“Experts point out that our supplies run for another 200 years, and it would be hard not to use them,” he said 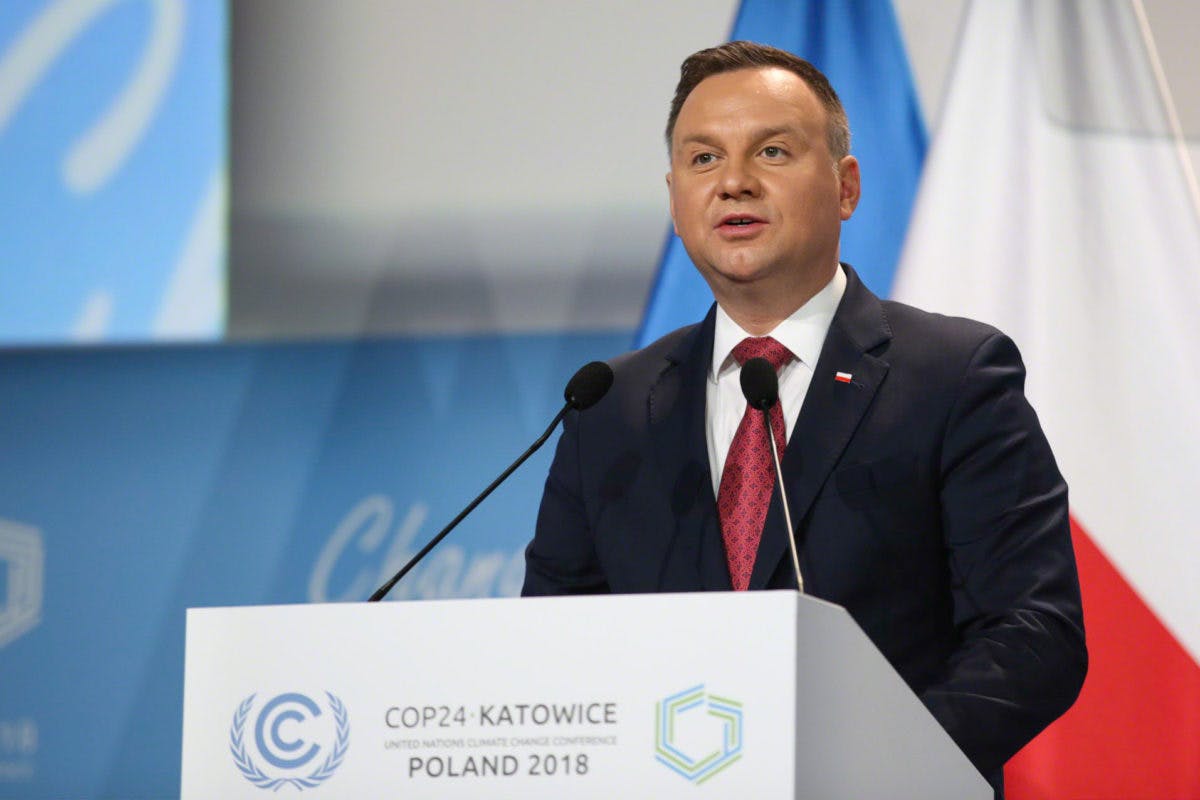 If anything, Duda said, Poland was able to reduce its greenhouse gas emissions by 30 per cent compared to the base year of 1988 by using technology to reduce emissions emitted from coal.

“We’ve been able to ensure energy security and the development of the industry based on efficient coal technology,” he said. “Poland presents a good example of a country following a sustainable development path because over the years, emission from our economy has been falling and we have been recording constant growth of GDP at the same time.”

Even Poland’s planned new coal plant, which they claim is going to be the latest most efficient technology, is still going to be an enormous emitter of climate-wrecking pollution and lead to thousands of premature deaths.

This year’s climate conference was preceded by a cascade of gloomy reports, including one from the UN in October warning that humans have just 12 years left to cut global carbon emissions in half to have any chance of slowing the rate of catastrophic global warming, as well as climate-induced disasters around the world.

The number of climate-related extreme events, such as droughts, wildfires, heat waves, floods and cyclones, has doubled since 1990, research has shown.

As a result, there’s an extra sense of urgency at the Katowice talks, known as COP24, and delegates are looking to the summit to provide a ray of hope.

The conference has three primary goals: complete the rulebook for full implementation of the Paris Agreement, a landmark global pact to combat climate change; encourage nations to increase their carbon-reduction pledges by 2020; and increase climate-finance commitments for poor nations already suffering from the impacts of climate change.

Host countries of UN climate talks are usually expected to lead the negotiation process for countries to agree on how the global community can address climate change and limit the global temperature rise to avoid cataclysmic and irreversible climate impacts.

But in saying that Poland can continue to burn coal to fuel its economy while also tackling climate change, Duda has sent the wrong message—one that could help the fossil fuel industry tighten its grip on the country, according to Flisowska.

“The fact that the president, who should be well aware of who comes to this global summit that’s supposed to fight climate change, said something like that, it’s really misleading to the public,” she said. “[The public] probably know much less than the people inside the conference centre. So what should people believe in if their president said something like that?”

Pascoe Sabido, a researcher and campaigner at the nonprofit Corporate Europe Observatory, also criticised Duda’s statement, saying there was no such thing as clean or emissions-free coal.

“Science bears out the fact that such a statement is completely untrue,” he told Mongabay. “Even Poland’s planned new coal plant, which they claim is going to be the latest most efficient technology, is still going to be an enormous emitter of climate-wrecking pollution and lead to thousands of premature deaths.”

Sabido also slammed the Polish government’s decision to measure its emission reduction achievement by using the baseline year of 1988, not 1990 as commonly used by other EU member states.

“Do you know what happened in 1991? The Berlin wall came down and the Soviet Union collapsed. So all economies in the EU collapsed and there’s nothing to do [with climate policies],” he said, “In the EU, we’ve reduced our emissions by 30 per cent, all that based on economic collapse.”

If the Polish government used 1990 as its baseline year, then the country’s emissions reductions would only amount to 20 per cent, Flisowska said.

She added she was “extremely frustrated” with how Duda touted the COP24 conference centre as being built on the site of a former coal mine.

“Katowice is one of the greenest cities in Poland right now with forest covering more than 40 per cent of the area,” he said.

The reality, Flisowska said, is that power plant chimneys continue to pump out plumes of smoke and monitoring sites elevated levels of air pollution.

Between November and April, a heavy veil of hazy smog often hangs over the city. It is, quite literally, a homemade problem: More than 80 per cent of private households are heated with outdated coal ovens, sending dangerous particulate matter and soot into the air unfiltered.

The burning of low-quality coal and even household waste is common, further exacerbating air pollution. Breathing the air in Katowice in a year has been likened to smoking 1,711 cigarettes a year.

“We have pretty bad air in Katowice during winter,” Flisowska said. “There are days where pregnant women are suggested to not go out.”