A new study launched by Siemens reveals that investing in efficient public transport system can boost economic growth up to US$800 billion; study cites Singapore as one of the leading cities with ‘best in class’ standards.

A new study of transport systems in 35 major cities around the world has revealed that an efficient public transport network can provide these cities with an economic value of up to US$238 billion annually by 2030.

London-based consulting firm Credo, which conducted The Mobility Opportunity study, said that these economic benefits could reach up to US$800 billion annually if the study is extended to all comparably-sized cities globally with a population of around 750,000 and higher.

The Siemens-commissioned study, presented in Singapore on Monday on the sidelines of the Singapore International Water Week, the World Cities Summit and the CleanEnviro Summit Singapore, noted that the ‘best in class’ standards in urban transport planning could help world cities become more attractive and competitive to businesses.

The report noted that the costs of inefficient transport are influenced by factors such as journey times, crowding and density of the transport networks, which impact a city’s productivity. 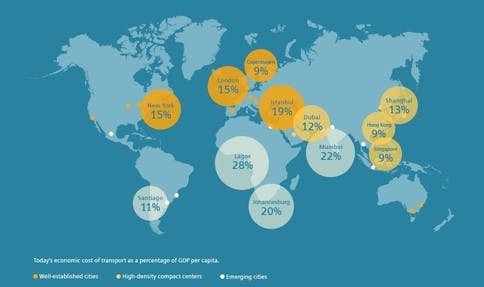 Siemens assessed the economic cost of inefficient transport around the world. Infographic: Siemens

The firm compared and grouped the 35 cities in three categories – namely, well-established cities, high density compact cities and emerging cities. They found that the most cost-efficient cities corresponding to these categories are Copenhagen, Singapore and Santiago (Chile), respectively.

While conducting the study, Credo said it compared and assessed the cities based on the leading cities in their category, which enabled them to quantify how much benefit a transport investment could bring to a city.

The best transportation systems are those in cities that could move people quickly, easily, and comfortably to their destination, noted Roland Busch, CEO of Siemens’s infrastructure and cities sector.

“The leading cities are already achieving this with efficient transport networks that feature modern infrastructure, easy connections across various modes of transportation, and, above all, a clear strategy of how to meet future needs,” explained Busch.

Urban mobility solutions, such as sensors on rail tracks, can predict when, and on which wheel, maintenance is required, ensuring train reliability

The study cited Singapore as having the best transportation networks of any city of its high-density, compact profile and suggested that other cities around the world can benefit from its experience.

It emphasised Singapore’s high capacity to meet the demand of increasing urbanisation, adding that its highly functional system makes it cope with future growth. It also highlighted the city-state’s commendable long-term urban planning, as well as the reliability and punctuality of its transport network, including the provision of air-conditioning on almost all of its public vehicles.

However, there remain some areas that are poorly connected to the network, but it can be addressed by the country’s continuous investments in maintaining its high standards, Siemens said in a statement.

The outcome of this report comes despite the significant public transport woes that Singapore has faced in recent years. In 2011, train breakdowns were frequent and severe enough to warrant the appointment of a Committee of Inquiry to investigate the causes. More recently, a single train breakdown in January this year affected the morning commute of 19,000 passengers - this was one of three delays that occured within a week.

He told Eco-Business that to predict and readily cater to future growth in passenger demand, “urban mobility solutions, such as sensors on rail tracks, can predict when, and on which wheel, maintenance is required, ensuring train reliability”.

Singapore has already implemented solutions to improve train infrastructure, including replacing sleepers on train tracks islandwide, and upgrading the signalling systems on train lines. In a bid to alleviate the stress on the train system during peak hours, Singapore’s Land Transport Authority also announced a scheme where commuters who travelled to one of 18 stations in the city before 7:45 am on weekdays could do so for free.

In a separate forum, officials and experts from both Singapore and Copenhagen at the International Transport Forum in Germany recently, shared the benefits of having more efficient transport system strategies, including achieving high rankings on global liveability indices.

This is in contrast to the high cost of inefficient and polluting road transport systems, as reflected in a recent report from the Organisation for Economic Co-operation and Development which estimated that air pollution from road transport cost as much as US$3.5 trillion a year.

Chris Molloy, partner at Credo, commented that all cities can learn from these leaders in transport planning and close the gap on efficiency, cost and productivity. “Because the more efficient a city’s transport network is, the more attractive the city is to business and people,” said Molloy.

How to promote cycling culture in hot and humid Singapore: study

A joint study by Singapore planners and Danish architect Jan Gehl shows how even a hot and humid country like Singapore can have a robust cycling and walking culture
How to promote cycling culture in hot and humid Singapore: study

'Glass is half full' for sustainable development in Asia: Experts

Environment ministers and experts at the Clean Enviro Summit Singapore agreed that despite the daunting prospect of explosive urban growth in Asia over the next few decades, there are many opportunities to chart a sustainable path ahead.
'Glass is half full' for sustainable development in Asia: Experts