Circular economy for plastic achievable but aggressive legislation is needed

Improving legal frameworks for waste management and recycling with stricter rules for businesses to follow is needed to tackle the world's plastic crisis, said experts at the Resource Transformation Dialogue 2021 held in Singapore.

In most jurisdictions, the disposal of plastics and other waste materials is cheaper than the option to collect, sort and recycle them. If left to manufacturers and material suppliers to decide how much they want to do to “close the loop” in the circular economy, these businesses might end up doing very little in the end, simply because it doesn’t pay.

Regulators increasingly need to recognise their role in leading the way to jump-start waste recycling, by introducing stricter legislative frameworks with clear and mandatory rules for businesses to follow, said industry experts at a plenary discussion on Thursday, as part of the Resource Transformation Dialogue 2021, organised by Eco-Business in partnership with global sustainable technology company, TOMRA.

With shifts in consumer mindsets, the experts said that there is now a real impetus for industry players to support more ambitious targets on recycling, though they need more clarity on what the exact legal requirements are.

“The problems of inadequate recycling have been made visual for everybody in recent years, from the images of beaches strewn with plastics to that of recycling facilities that do not quite make the mark. They’re all on the internet for the whole world to see and that has made politicians, bureaucrats and industry leaders want to act,” said Clarissa Morawski, chief executive and co-founder of Reloop, a non-profit that works with governments, industry and civil society groups to bring an end to waste.

Retrieval programmes for plastics need to be financed by the producers

For example, the European Commission has laid out a strategy for accomplishing the goals in its Circular Economy Action Plan that was adopted in May 2020. Speaking from Brussels where Reloop is headquartered, Morawski describes the targets as “aggressive”, emphasising that Europe now has a specific goal to collect 90 per cent of plastic bottles by 2029. Design requirements to ensure greater recycled content in products will also be worked into legislation.

On the plastic problem, Morawski is supportive of making manufacturers pick up the recycling tab. Cost competitiveness is a major consideration for producers of virgin plastic - new resin created from natural gas or oil - that has traditionally been so cheap to make that it undermines the economics of the recycling market. Consumers cannot expect these businesses to “do the right thing” on their own, said Morawski.

“We have to get those making virgin plastics to start investing in circular plastics, and for businesses to collect and sort more. It is a costly venture, especially when there are so many types of plastics and to properly recycle them, you have to sort them right down to the colour,” said Morawski. “I do not know if these companies are going to voluntarily make the commitment, but if they do not, they should be forced to do that through legislation.”

Michael Löwe, vice president of governmental affairs system design at TOMRA Systems ASA, agreed that there must be intervention from regulators to “level the playing field in terms of price and costs” when it comes to waste recycling. “Simply talking about a product being sustainable is not enough,” he said.

The problems of inadequate recycling have been made visual for everybody in recent years, from the images of beaches strewn with plastics to that of recycling facilities that do not quite make the mark. They’re all on the internet for the whole world to see and that has made politicians, bureaucrats and industry leaders want to act.

TOMRA, headquartered in Norway, is currently the world leader in reverse vending machines and sensor-based sorting systems for the recycling, food and mining industries. These technologies are used in deposit return systems (DRS) to make sure that packaging is taken back and recycled.

Marika Lindstrom, vice president of procurement at Unilever, explained the difficulties of processing certain types of plastics that cannot be properly recovered. Responding to a question from the audience about what the consumer goods supplier plans to do with its large plastic packaging footprint of 700,000 tonnes a year, Lindstrom said that for markets with better recovery infrastructure in place, Unilever pays for the costs of collection, recycling and disposal under Extended Producer Responsibility (EPR) schemes introduced by the national governments.

“But there are markets like India and Indonesia where there is no proper infrastructure in place. In these instances, we attach a monetary value to the sachets or flexible packaging of our products to incentivise the waste pickers to recover the difficult-to-collect plastics,” said Lindstrom. “The plastics are then brought to aggregation points and sold to places like waste-to-energy plants and cement kilns.” 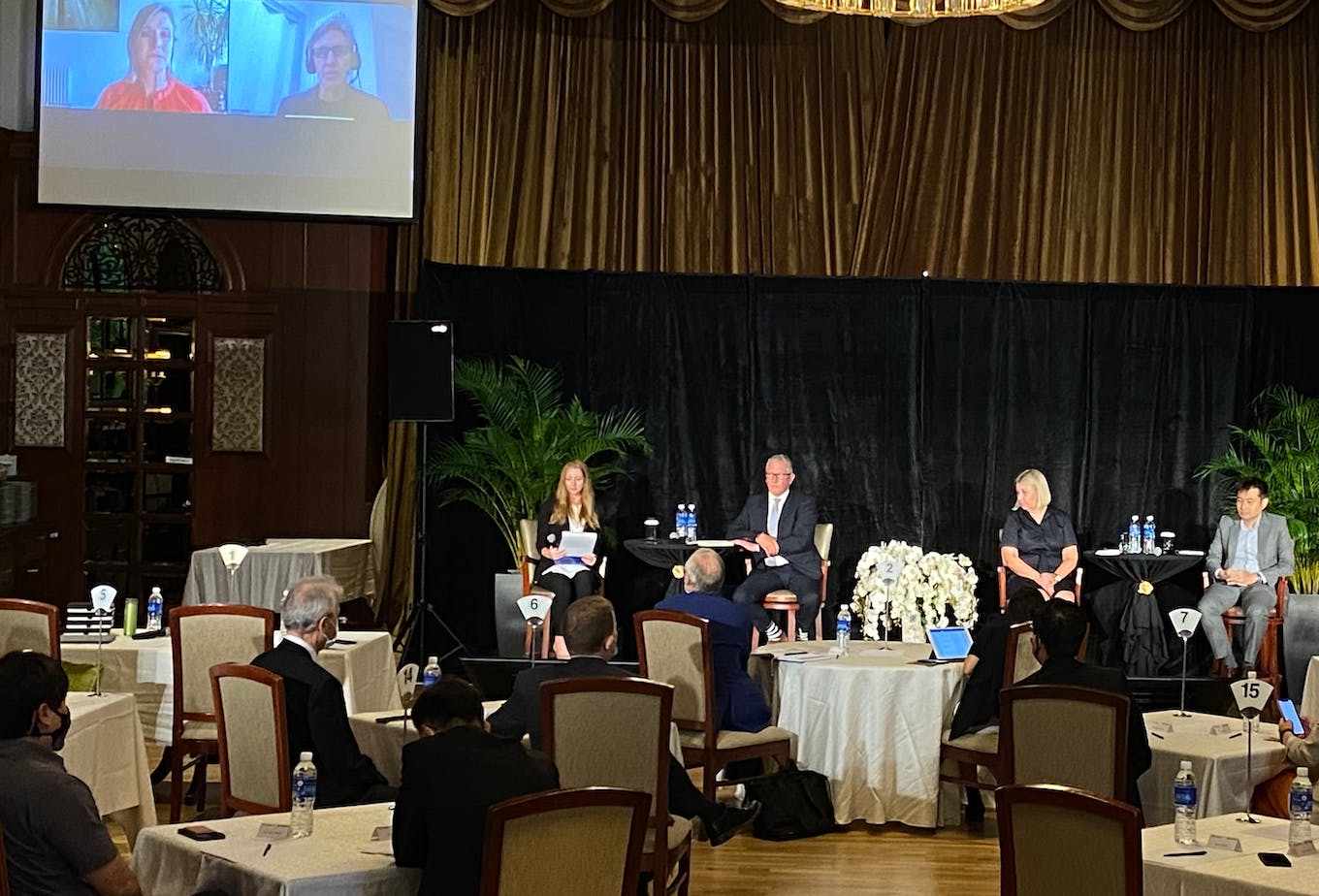 For Singapore, closing the loop in the circular economy is an existential concern. Plastic waste recycling rates in the city-state is the lowest at less than 5 per cent but its government is moving towards introducing EPR laws for both packaging and electronic waste by 2025, concerned that Semakau Landfill, the only landfill it has, will run out of space in 2035.

Speaking at the plenary discussion, Christopher Tan, director of the sustainability division at the National Environment Agency, emphasised the role of technology in this process. Singapore is looking into extracting recyclable plastic from solid waste and investing in plastic recovery and advanced recycling facilities.

Dr Dominic Hogg, director at Eqanimator, a management and environmental consultancy, also thinks that finding a way to treat and process waste carbon is a venture that is worth pursuing.

Hogg said that facilities in Norway, Netherlands and other parts of Europe are already starting to extract fossil carbon from mixed waste. From a climate change perspective, disposing of waste by incineration should no longer be appealing, he said.

“We used to assume it was great because waste-to-energy incineration plants were displacing coal-fired power generation, but that is not true anymore. Increasingly, we are shifting towards a situation where the energy source that is being displaced has a lower carbon intensity, so the benefits of generating energy from incineration start to decline.”

Recent reports have estimated that the circular economy could potentially unlock US$4.5 trillion of economic growth by 2030. “If we try to retain materials in the cycle of use within a more circular economy, we can also free up capacity at the incineration plants. I think we shouldn’t waste that opportunity,” said Hogg.

Ramakrishna, in his keynote speech, emphasised the importance of quality and reliable data when it comes to planning for waste recycling. Such knowledge enables governments to make sound policies, allocate appropriate budgets and adapt to future demand, he said.

Ambassador-designate Homme acknowledged the strong bilateral ties between Singapore and Norway, and called for both countries to continue sharing their best practices and technological solutions with each other. Norway recently unveiled a new national strategy to develop a green circular economy. Homme, in his speech, said that the strategy will be centred on helping businesses and industries make better use of resources, ensuring that they create profitable business models at the same time.

This timely dialogues illustrates that the circular economy for plastic is achievable but must complement the overall reduction in usage. Governments must drive the management of waste through legislation and by courting private funders to invest in new technologies to stem the tide of plastic waste that is polluting our waterways and natural environment. With rapid population growth in Asia, particularly in the next decade, the transformation of our resources is a must if we are to protect the planet. The key is the urgency with which it arrives.