Cigarettes, tampons, toothbrushes: The company that wants to recycle everything

Tampons, toothbrushes, and office files — traditional waste businesses may shy away from trying to deal with these materials, but one company has made it its mission to "recycle the non-recyclable".

Recycling cigarette butts, tampons and toothbrushes is likely an already impossible demand for most traditional waste management companies. Add in the expectation that the firm’s work should be ‘sexy’ enough to warrant being made into a reality television show, and many may simply write off the task as too unrealistic to take seriously.

However, this is exactly what one company has achieved. Meet TerraCycle, the New Jersey-based outfit that since 2002 has been driven by a simple mission: Eliminating the idea of waste.

The firm, which started 14 years ago as an organic fertiliser business run out of a dorm room, has since grown into a US$18.8 million outfit which creates solutions to give new life to materials that may otherwise end up as waste.

In the process, TerraCycle, which now has 130 employees and eight global offices, has helped 63 million people recycle their waste, and raised US$15 million for charities around the world. It has also diverted some 3.7 billion pieces of waste from the landfill to date.

Tom Szaky, the company’s founder and chief executive officer, tells Eco-Business in a recent interview that the firm’s mission is to find creative ways to recycle materials that fall through the cracks in conventional recycling infrastructure.

Ultimately, simple economics determine what gets recycled and what doesn’t, notes the 34-year-old. Precious metals like gold, platinum and silver will never become waste because they are so valuable that the cost of collecting and recycling these materials is more than offset by their sale value. This also holds true for materials such as paper, glass, some types of plastic and aluminium, notes Szaky.

But objects like a toothbrush, sandwich bag or potato chip packets are not seen as recyclable not because of technical constraints, but because they cost more to collect and process than the materials are worth, he explains.

Szaky adds: “While traditional recyclers would not bother to collect or process such materials, what we do at TerraCycle is to figure out other ways to generate value from recycling these products.”

It’s our goal to make garbage sexy and boost innovation in the sector.

This requires tackling three major issues: collecting the waste, finding a way to process it and reuse the materials, and then developing ways to market and promote the new end product—all in an economically-viable way.

Where waste collection is concerned, a key strategy TerraCycle employs is to get companies to fund recycling programmes for their products, so that recycling is free for customers. Brands sign up for these initiatives so that they can position themselves as leaders in sustainability and recycling, explains Szaky, adding that “hopefully this helps them gain market share.”

In New Zealand, for example, TerraCycle partnered with food storage giant Glad to offer people a way to recycle their ClingWrap, sandwich bags and plastic containers. Glad funds the logistics required for users to mail in their recyclables to the TerraCycle.

TerraCycle also runs a cigarette butt recycling programme in many of the countries it operates in. In Australia, for example, it got British American Tobacco Australia, Phillip Morris Limited and Imperial Tobacco Australia to fund a programme whereby users can mail in cigarette butts, or toss them into special bins in the city. While the initiative is no longer run nationally, a few councils in the country have continued the scheme independently.

Municipalities in some cities such as New Orleans, have also invested in cigarette recycling programmes, as it reduces litter in the city and improves the urban environment, adds Szaky.

While anyone can participate in TerraCycle’s corporate-funded programmes—which extend to several other products including juice packaging, oral care products, beauty product packaging and coffee capsules — participants can also use the programme to raise money for an organisation of their choice.

This is because TerraCycle awards “TerraCycle Points” for every unit of waste recycled above a certain threshold. Each point is worth a few cents, and individuals can donate the funds raised from their recycling to any non-profit or charity, including schools.

For the products not covered by sponsored programmes, people can also purchase ‘Zero Waste Boxes’ from TerraCycle. These are sold through the company’s website or retail partners in each country, and allow users to mail in products ranging from snack wrappers to compact discs, plastic gloves, as well as office supplies and stationery.

Once it has collected the waste, TerraCycle handles the materials in a myriad of different ways. Where possible, it reuses or upcycles the products. Examples of this include sewing juice pouches into backpacks, chip bags into suit jackets, and making pencil cases out of granola wrappers. The company then sells these online and even has video tutorials on its website to allow people to do upcycling projects at home.

A majority of the materials, especially plastics, are melted down and turned into pellets that can re-moulded into new hard plastic products such as benches, picnic tables and playgrounds. The company makes some of these products itself and sells them online, but also sells the raw materials to industrial users.

And for the cigarette butts it collects, the company composts the paper and tobacco components after shredding the waste, and turns the filter, which is made from cellulose acetate, into new plastics. 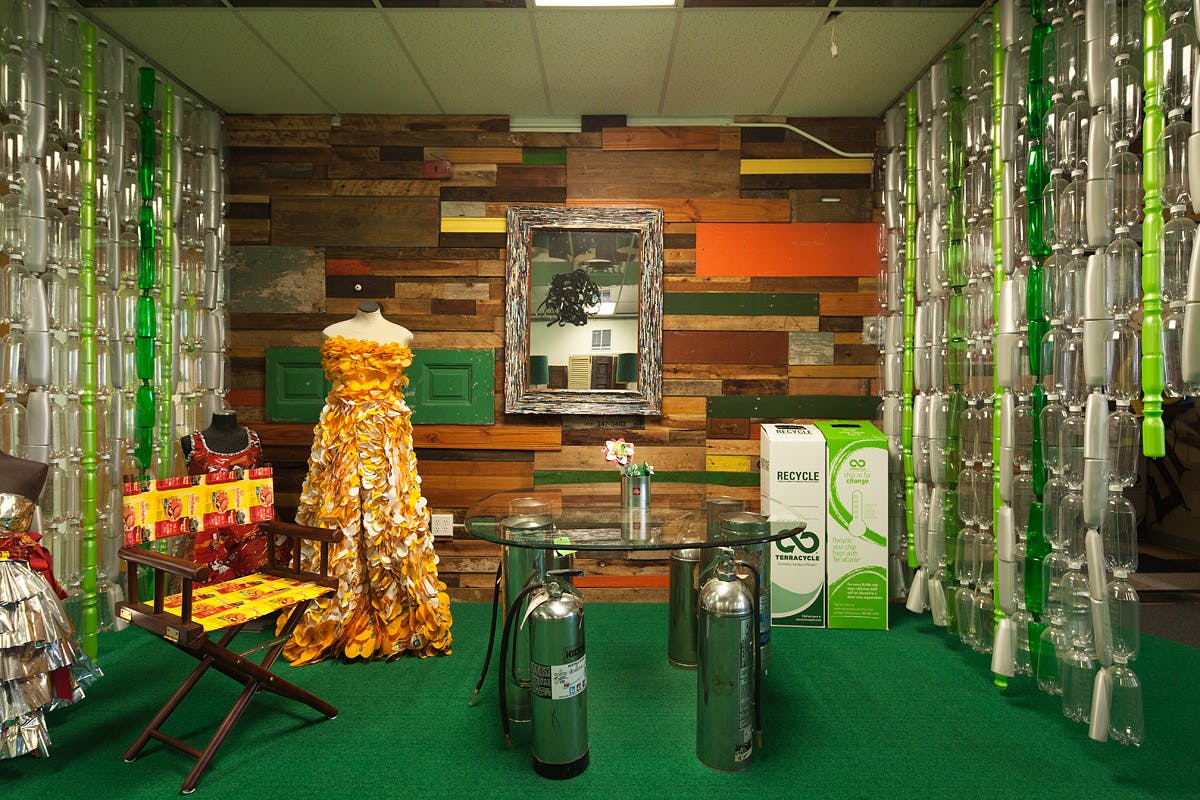 An interior shot of TerraCycle’s headquarters in Trenton, New Jersey. Much of the office is fitted, and decorated, with recycled materials. Image: TerraCycle

Despite the company’s aim to end waste altogether, there are some materials it cannot recycle, acknowledges Szaky. Some, like sandpaper, are difficult to recycle from a technical perspective. There are also legal issues around handling certain types of waste, such as biohazardous hospital waste, which must be immediately incinerated by law.

But for the waste that isn’t off-limits, a key challenge TerraCycle faces is getting the public engaged and excited about recycling. While its points programme is one way to address this, there is much more work to be done, says Szaky.

“Garbage is something people want to get rid of, not something they want to think about,” he laments. “Because of that, the amount of innovation in this space is very low.”

“It’s our goal to make garbage sexy and boost innovation in the sector.”

This is why the company’s US-based employees have found themselves the stars of a reality television show called Human Resources, which follows the staff’s adventures as they look for creative solutions to challenging waste streams. One episode of the show even has employees grappling with how to recycle tampons—though the company has yet to announce a solution.

“The show is a great way to get people excited about, and get on board with what we’re doing,” says Szaky.

He adds that going forward, TerraCycle not only wants to find solutions for more types of products, such as cosmetics, but also expand into Asia.

The company already has an office in Japan, and in July this year opened up a new office in China. India, Taiwan and South Korea are also part of Szaky’s plans.

While wealthier Asian economies have a good waste management infrastructure that aligns well with TerraCycle’s recycling objectives, countries like China and India are quickly waking up to the urgent need for better waste management practices.

Whether through more publicity, increasing the repertoire of products it can recycle, or international expansion, the defining feature of TerraCycle’s future plans is growth, says Szaky.

“Right now, my job is to make the company as big as humanly possible,” he says. “The bigger we get, the more impact we create.”