The failure of China’s largest corporations to meet waste management and emissions reductions targets have given them the lowest score in a ranking of how companies report their environmental impact. Singapore companies also fare poorly while Hong Kong firms top the list.

Companies from the world’s second-largest economy rank the lowest among Asia’s most developed economies on how they report their environmental impact, research by a United Kingdom-based financial markets data provider has revealed.

Drawing on its environmental, social and governance (ESG) database, Refinitiv, a provider of financial markets information, released data that shows how companies in the region are measuring up on their environmental performance metrics.

Chinese firms have an average environmental score of 56, below the regional average of 62, among eight of the biggest Asian economies surveyed. Singapore firms registered second lowest in a ranking topped by the city-state’s regional rival, Hong Kong.

In the report titled Financing a Sustainable Future in Asia, China’s weak performance was mainly due to a large disparity in resource and waste management, with 83 per cent of firms adopting waste reduction policies, but only 8 per cent having introduced specific waste reduction targets to back up their policies.

There is a greater portion of companies with policies on emissions and waste management than those with actual targets for improvement, and bridging this gap is crucial to further sustainable development in the region.

Chinese companies were also behind in waste recycling with a recycling ratio—that is, the proportion of the total waste produced that is recycled—of 68 per cent, but only 7 per cent report this metric.

Besides waste, Chinese companies fared poorly in their policies to reduce emissions; 77 per cent of companies adopted actions to curb their carbon footprint but ony 8 per cent had reduction targets. 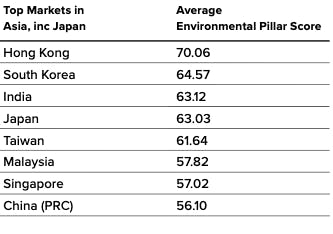 China saw a huge increase in water efficiency policies with 62 per cent of organisations adopting water policies in 2017, from only 22 per cent in 2013. But this did little to improve its overall score as it ranked lowest in the region with only 1 per cent of these companies meeting their water efficiency improvement targets.

Singapore firms occupy the second lowest spot in the environmental sustainability survey, mainly due to poor resource and waste management. Some 80 per cent of the city-state’s companies have adopted waste reduction policies, but only 28 per cent follow them, the study found. 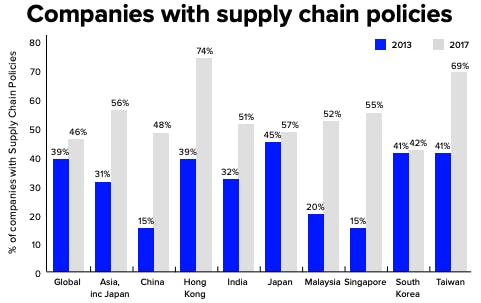 Singapore companies have made big improvements in monitoring their supply chains. Image: Refinitiv

But despite water being a highly limited resource in Singapore, the island state fared better than China at water efficiency. Some 60 per cent of Singapore companies have water efficiency policies and 18 per cent set targets.

Efforts to build more ethical supply chain policies helped place Singapore firms above Chinese, with a huge jump from 15 per cent in 2013 to 55 per cent in 2017. The study’s authors suggested that the improvement on this metric has most likely been motivated by the Southeast Asian haze crisis of 2015, where companies were prompted to scrutinise their supply chains to weed out deforestation and burning.

However the report also noted that it remains concerning that, despite the persistence of the haze, which this year was the worst since 2015, only 40 per cent of Singaporean companies invest in developing environmental products, the lowest in the countries surveyed.

To assess the environmental scores of companies, Refinitiv based performance across three categories of company-reported data and disclosures: emissions, resource use and innovation. Each company is rated across the categories to produce a weighted score.

A “clear gap between intention and action” was seen among those that ranked in the lower tier where firms set policies without backing up their intentions, noted Julia Walker, Asia Pacific head of market development and risk for Refinitiv.

“There is a greater portion of companies with policies on emissions, waste management, and water efficiency than those with actual targets for improvement, and bridging this gap is crucial to further sustainable development in the region,” Walker told Eco-Business. 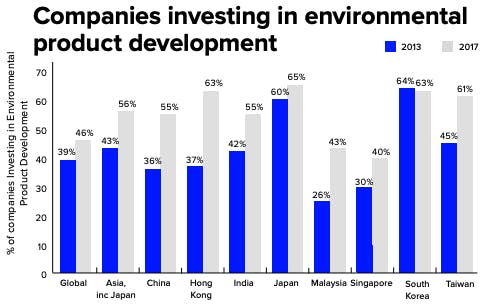 Japanese companies are the most likely to invest in environmental products. Image: Refinitiv.

Despite the poor ratings of some of Asia’s biggest markets, the largest companies in the region are comparable with their global peers in reporting their environmental impact. The regional average slightly exceeds the worldwide average in Refinitiv’s environmental pillar scores.

Hong Kong recorded the best overall performance in Asia with an average score of 70, emerging as leaders in the region for having carbon emissions policies, sustainable supply chain policies and committing to developing environmentally friendly products and services.

The special administrative zone of China was followed by South Korea with an overall score of 64.57. India ranked third.

Companies in Hong Kong (95 per cent) and India (92 per cent) had policies on resource reduction, while Japanese (41 per cent) and Taiwanese (38 per cent) firms were able to back up their policies with targets. 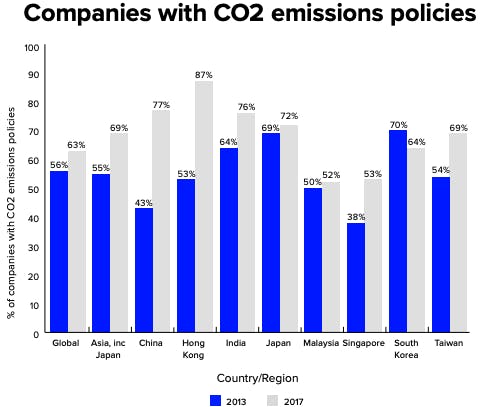 Tokyo-listed companies were clear leaders in waste recycling, with both the highest recycling ratios averaging 80 per cent and recycling ratio reporting at 47 per cent.

Hong Kong companies were at forefront of monitoring their carbon footprints; 87 per cent of organisations have emissions policies, while Japan fared the best for emissions reductions targets.

Walker noted: “We see more financial institutions increasing due diligence and directing investment towards more responsible and sustainable companies and investments. As concerns in areas such as climate change grow, we expect this trend to accelerate.”