Low in moisture and high in calorific value, palm kernel shells are ideal for burning, but their use for power production does not come without challenges. Can these materials help shrink coal's climate impacts in Asia?

What happens to the waste that accumulates when oil palm fruits are processed?

Palm kernel shells (PKS) are the fraction left after crude palm oil has been extracted from fruit bunches and palm kernel oil has been squeezed from palm nuts. Thousands of tonnes of these fibrous shells pile up behind palm oil mills each year, but for a long time, factory operators did not know what to do with them.

Then came the biomass industry. Although Asia’s rising coal consumption was not as controversial a topic as it is today, Singapore-headquartered company Provident Biofuels recognised in 2011 that burning biomass residue such as kernel shells could help slash emissions from coal combustion, and started buying the materials from mills in Indonesia and Malaysia to sell it to power producers across the region.

Traditionally, some of the kernel shells were used by factories themselves for their own purposes, particularly in Indonesia. Faced with an unreliable power supply, they installed boilers to combust them to generate their own electricity.

But about half of the roughly 7 million tonnes of the kernel shells coming out of Indonesian mills each year are excess and cannot be put to any use. Not only do these materials attract insects that can wreak havoc on plantations, but they also eventually pose a fire threat due to the methane they generate if left to rot.

To avoid such risks, mills used to pay companies to dispose of their kernel shells. Mixed with concrete, they have been used to pave roads and in foundations of buildings, but often they were discarded in irresponsible ways, said Douglas Tay, director at Provident Biofuels.

“There are only so many roads that you can build. If the [biomass] industry did not exist, the mills would still be dumping [PKS] in rivers, the sea or in open fields,” he told Eco-Business.

Tay said the company has also had positive impacts on local communities in Indonesia and Malaysia through the jobs it provides, as it needs to hire thousands to procure PKS and transport them to the company’s stockpiles where they get screened and loaded onto vessels for shipping. “We provide about 8,000 jobs, directly and indirectly through logistics partners,” he said.

Other than the carbon dioxide produced during transportation, there is no additional environmental impact from burning palm kernel shells.

Today, companies pay the mills for the shells they supply, but the materials remain cheap. They can also easily be handled in bulk and transported while requiring minimal processing. But it is their high calorific value—they release high amounts of energy as heat when burned—and their low moisture content compared to other agricultural biomass types that make them attractive to power generation businesses.

“PKS are almost like natural biomass pellets. The costs of making them ready for combustion are almost zero. When they are dried, moisture levels go down to 20 per cent, and their calorific value is equal to that of low-grade thermal coal,” explained Tay.

This makes their combustion carbon neutral, with net emissions only pumped into the atmosphere during shipping, he said, adding PKS also emit less nitrogen oxide and sulfur oxide than coal when burned.

And unlike other biomass materials, PKS do not have the issue of timing. Burning PKS may release large amounts of carbon all at once, but it does not take long for new fruit bunches to grow and absorb carbon back out of the atmosphere, and oil palms are harvested up to three times a year.

Forests cut down to produce wood chips or pellets, on the other hand, can take decades to capture the same amount of greenhouse gasses released. The same applies to residues from the wood and furniture industry used to make pellets, which could instead be recycled.

“Other than the carbon dioxide produced during transportation, there is no additional environmental impact from burning palm kernel shells,” said Lee, whose company buys kernel shells from Provident Biofuels to sell them across the region. 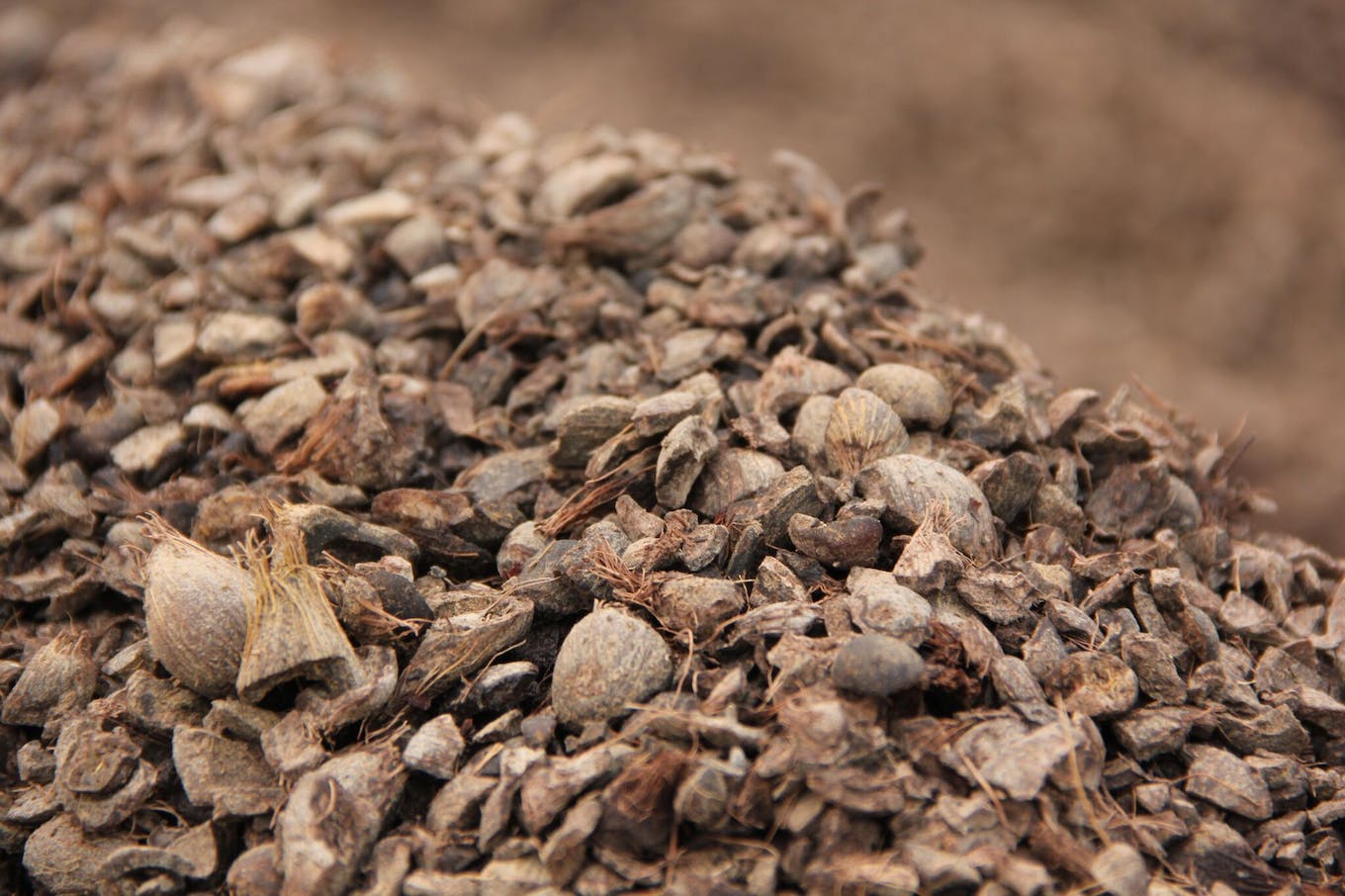 According to Daichi Kamite, general manager and head of corporate planning at eREX, an electric power company that operates four biomass power plants in Japan, the Japanese government pays a feed-in tariff for electricity produced from PKS, which it regards as a form of renewable energy.

Bonar Silalahi, head of industrials and consumer goods, sector solutions group at UOB, a Singapore bank that has provided finance for Provident Biofuels, commented: “In [Asia], the use of palm kernel shells as an alternative to fossil fuels can help to address rising greenhouse gas emissions. In addition, the use of palm kernel shells as a biofuel can also help the industry to better manage the discarded waste material generated during the production of palm oil.”

However, exactly how much carbon switching PKS with coal can save has not been worked out yet.

According to Naruhito Sugiura, forest campaigner at environmental group Friends of the Earth in Japan, it is their transport emissions which make it questionable whether kernel shells can help shrink climate impacts at all.

PKS should be burned locally to cut coal use in palm oil-producing countries instead, said Sayoko Iinuma, of the Global Environmental Forum (GEF), a Tokyo-headquartered non-profit organisation.

But most coal-burning nations already rely on coal from beyond their borders, and often from far away places, generating transport emissions in addition to those released when coal—the world’s dirtiest fossil fuel—is combusted. South Korea sources 90 per cent of its coal from overseas, while Japan imports 99 per cent of it, with most imports coming from Australia.

While the industry has yet to finalise its emissions analysis, Lee said he could “confidently” say that carbon emissions could be slashed by at least 75 per cent if kernel shells were burned instead of coal, adding the amount of emissions savings the materials could deliver depended on where they were combusted.

The problem is that power from PKS is not cheap. At 24JPY/kilowatt-hour, the electricity price that the shells can achieve is more than double than the market price in Japan, said Kamite.

While this makes the cost of generating electricity from PKS more expensive than solar and onshore wind energy, biomass comes with a significant advantage, explained Lee. “Solar and wind energy are intermittent renewable energy sources. You cannot control them, so they are difficult to handle. But electricity from PKS is available 24/7, and can be turned on and off at will,” he said.

Will PKS be able to replace coal completely in Asia? Probably not, said Tay. Japan alone burns more than 100 million tonnes of coal a year, whereas kernel shells currently exported from Malaysia and Indonesia only amount to about 4 million tonnes. Ultimately, they can only reduce the amount of coal that is burned by a few per cent.

Not everyone agrees PKS should be burned for power. Grant Rosoman, a global forests solutions senior adviser with Greenpeace International, said: “The burning of any biomaterial is the lowest value use and releases the stored carbon back into the atmosphere.”

“Rather than burning them for electricity, other higher-value uses of PKS and any compounds they contain should be prioritised and explored, especially with rapid advances and innovations in bioeconomy technology,” he told Eco-Business.

Studies have shown the energy value of PKS significantly increases if they are converted to bioenergy through thermochemical processes, where organic materials chemically decompose at elevated temperatures, rather than combusted.

Rosoman said the palm oil sector should also consider returning PKS to the soil to increase carbon and substitute chemical fertiliser instead of shipping them over vast distances for power production. “The burning of PKS should be an absolute last resort,” he noted.

Meanwhile, there are concerns in South Korea, where biomass is heavily subsidised, the biomass industry could hurt efforts to adopt solar and wind technologies. A recent report by Korean environmental advocacy group Solutions for our Climate warns if large quantities of renewable energy certificates are issued for biomass in the country, it could negatively affect the competitiveness of the clean energy market, discouraging utilities from investing in renewables.

It is unsurprising that an industry which buys waste from a sector associated with various environmental and social ills has come under scrutiny. Tay said clients are increasingly demanding that PKS be sourced responsibly, with some calling for certification by a third party.

“Our customers require us to get better information from the mills, so we will try to provide them with that information. But it will take time,” he told Eco-Business.

Provident Biofuels, which currently exports about 1 million tons of PKS a year, started its traceability efforts earlier this year. So far, the company has visited three mills with independent auditors and eventually wants to ensure the mills it sources from treat their workers fairly, comply with environmental regulations and are not built on stolen land. The firm will also verify an environmental impact assessment was conducted, and that the mills have a proper license to operate.

However, it will only be able to trace the materials back to where it procures them, and not beyond. Where the mill procures the fresh fruit bunches from is beyond the company’s control, said Tay.

He explained at 0.3 per cent, the economic value of PKS made up only a sliver of the mill’s total income, making it difficult for the company to influence how and where fruit bunches are sourced. “We are way too small to have an impact. However, it is clear that the industry could benefit from greater supply chain transparency,” he said.

Environmentalists are worried. Soo-Jin Kim, senior researcher at Solutions for our Climate, said any analysis of carbon emission reductions that PKS could deliver should take emissions from land use changes from carbon-rich rainforest or peat to monoculture tree plantations into account.

Tay, however, pointed out the shells’ low economic value would be unlikely to incentivise farmers to convert more forests. “Nobody would grow additional oil palms for such a small increase in profit as this would be akin to buying an office building to be able to collect its rubbish,” he said.

But as demand for the materials skyrockets, environmentalists believe the industry could eventually eat into forests. Sugiura of Friends of the Earth said: “If the value of PKS increases, it might drive plantation development.”

Kamite said the quantity of PKS Japan imported had increased significantly over the years, from 540,000 tonnes in 2015 to 1.8 million tonnes in 2018. Lee shared demand for the shells has been growing so fast that Hanwa is looking as far as Nigeria to procure them.

Greenpeace’s Rosoman said any production, trade and processing of kernel shells must only be from transparent supply chains with verified NDPE—no deforestation, no peatland, no exploitation—sources.

As the sector expands, its sustainability credentials will improve in step, Tay said.

“We’re trying to clean up the palm oil supply chain. We provide the rural economy with jobs and our business principles have improved governance and compliance in the industry. Without us, there would be more waste and more coal burning. As we grow, so the sector’s environmental and social performance grows too,” he said.