Can hardline activists Sea Shepherd have an impact in Southeast Asia?

The NGO made famous by docu-drama Whale Wars is docked in Singapore. Given restrictions on direct-action campaigning in Southeast Asia, what sort of impact could the swashbuckling conservation group hope to have in safeguarding the region's biodiverse marine life?

Its ship, a $12 million research and patrol vessel called Ocean Warrior, had sailed from Africa, where it took on the illegal fishing trade, and is undergoing maintenance. The crew are awaiting instructions from headquarters in the United States for their next plan of action.

“We hope to launch new projects around Asia,” said Mar Casariego, captain of the Ocean Warrior, at a small gathering of supporters in Singapore on Wednesday.

But that could be a difficult ambition to fulfill.

Included on a terrorist watch-list along with neo nazis and jihadists in January this year by the United Kingdom government, it seems unlikely that Sea Shepherd will be permitted to operate officially in Singapore. Or any other Southeast Asian country, for that matter.

I’d be amazed if they [Sea Shepherd] would be allowed in indonesian waters to work. Absolutely amazed.

Like Greenpeace, sources say the NGO is considered too rabble-rousing to be granted an NGO licence in the conservative city-state. NGOs that operate in Singapore, such the World Wide Fund for Nature (WWF), typically work closely with businesses and governments to do their work.

Besides, in Singapore, non-profits must ensure that most of their work has tangible local benefits, and Singapore has no fisheries of any size in need of protection.

No such thing as sustainable fishing

Sea Shepherd’s work pivoted from chasing Japanese whaling fleets in 2017, when founder Paul Watson, a former Greenpeace activist who founded Sea Shepherd more than 40 years ago, said the cost of sailing to the Southern Ocean, aggressive use of Japanese military technology to track their ships, and anti-terrorism laws that hamstring the green group had made pursuing the whalers prohibitively difficult.

Instead, one of Sea Shepherd’s core pursuits now, is going after illegal, unreported and unregulated (IUU) fishing, such as shark finning, illegal by-catch and fishing without a licence. Working with governments by sharing resources, expertise and some of the 14 vessels and 160 crew the NGO has in operation globally, Sea Shepherd is fighting an illicit business that accounts for 40 per cent of the $150 billion global fishing trade.

“We have to put our resources where we think they will be most effective. Right now, IUU fishing is the way to go,” said Casariego.

Illegal fishing is hurting the sustainability of fisheries that are already overfished by legal fishing. It does not only hurt marine life; the illegal fishing trade is also exposed to human exploitation, with recent reports highlighting the slave trade at sea, an acute problem in Southeast Asia.

“There’s no such thing as sustainable fishing yet—as there’s so much illegal fishing,” said Casariego, a Spaniard whose first name means ocean in Spanish.

And catching illegal fishing vessels is not easy. “The ocean is big. It’s difficult to find and catch vessels fishing illegally,” said Casariego.

Even though 95 per cent of fishing around the world happens under the sovereignty of states, most countries don’t have the will or the resources to enforce the law—which is where Sea Shepherd comes in, she said.

Taking on IUU fishing can also be dangerous. Though non-violent, some Sea Shepherd vessels on IUU missions are now armed, with military personnel seconded by government partners helping them to apprehend illegal fishing vessels, which they escort ashore once caught.

Over the last four years, Sea Shepherd has helped to apprehend 52 vessels fishing illegally, working with governments in Gabon, São Tomé and Príncipe, Liberia, Tanzania, Namibia, Benin and The Gambia.

A spokesperson for Sea Shepherd’s headquarters in the US explained that the group’s focus is helping developing countries with monitoring, control and surveillance, as it is difficult to keep up with ships that spend a long time at sea.

“The patrols are completely under the direction of the government. We are simply providing training and transportation. We are open to exploring similar partnerships in Southeast Asia that could revolutionise fisheries management and enforcement,” the spokesman said.

One of Sea Shepherd’s more famous IUU campaigns was Operation Icefish, in 2014.

Two Sea Shepherd ships, the Bob Barker and the Sam Simon, were sent to stop fishing for Patagonian tooth fish in Antarctica, a protected region. The chase of one vessel, called The Thunder, covered 10,000 miles and lasted 110 days, from Antarctica to the Indian Ocean to the Gulf of Guinea, until the captain of The Thunder sank his own ship. Sea Shepherd rescued the crew.

Under the constant watch of activists filming the chase, The Thunder, which was Spanish owned but flying the Nigerian flag, was unable to change its appearance with paint or by raising a different flag, common tricks used by pirates to hoodwink law enforcers.

There’s no such thing as sustainable fishing yet—as there’s so much illegal fishing.

The Sam Simon had stayed in Antarctica to retrieve a fishing net. The net was 72 kilometres long and six metres high.

“It took three and a half weeks of constantly pulling the net out of the water,” recalled Antoine Amory, a former fireman who was on the mission, and who has pursued Japanese whalers in his 12 years of service for the NGO.

Though Sea Shepherd could use Singapore as a strategic base, the NGO has bigger fish to fry when it comes to protecting marine life in Southeast Asia.

However, in Indonesia, home to some of the world’s most biodiverse waters and a major hub for illegal fishing, there is arguably even less opportunity for Sea Shepherd’s campaigns.

“I’d be amazed if they would be allowed in Indonesian waters to work. Absolutely amazed,” an unnamed environmental activist who’s campaigned in Indonesia for more than 10 years told Eco-Business.

Indonesia is, at present, a particularly difficult country for foreign-backed environmentalists to do their work.

WWF Indonesia had its license to work with the environment ministry abruptly cancelled late last year, and the arrest of an American environmental journalist in January is the latest in a number of incidences where the Indonesian authorities have taken a dim view of outside influence on its environmental affairs.

In the Philippines, a country of more than 7,000 islands that is also a regional centre for illegal fishing, environmental activism is more entrenched in the local culture than in most of its neighbours—although the country is also the most dangerous nation on the planet for environmental defenders.

So, what does Sea Shepherd think about being branded as troublemakers?

“We prove them wrong,” said Carariego. “We are not extremists. We believe in what we do. We are driven by passion. The state the oceans are in now requires strong action. And we do believe in law enforcement.”

“We have worked with governments in Africa, and hopefully more countries are interested in the work that we do, and will offer us the opportunity to collaborate with them,” she said.

Besides waiting for a mission in Asia, the group are hoping to raise some funds in Singapore (it costs about US$3,650 a day to keep a patrol vessel action-ready). They also want donations of food (the crew, who are all vegans, are seeking supplies of tofu, vegan sausages, cheese, chocolate and burgers, tortilla wraps, and tinned chickpeas, beans and tomatoes).

Casariego concedes that the group’s cause might be helped by recruiting more Asian volunteers to gain more support in this region. 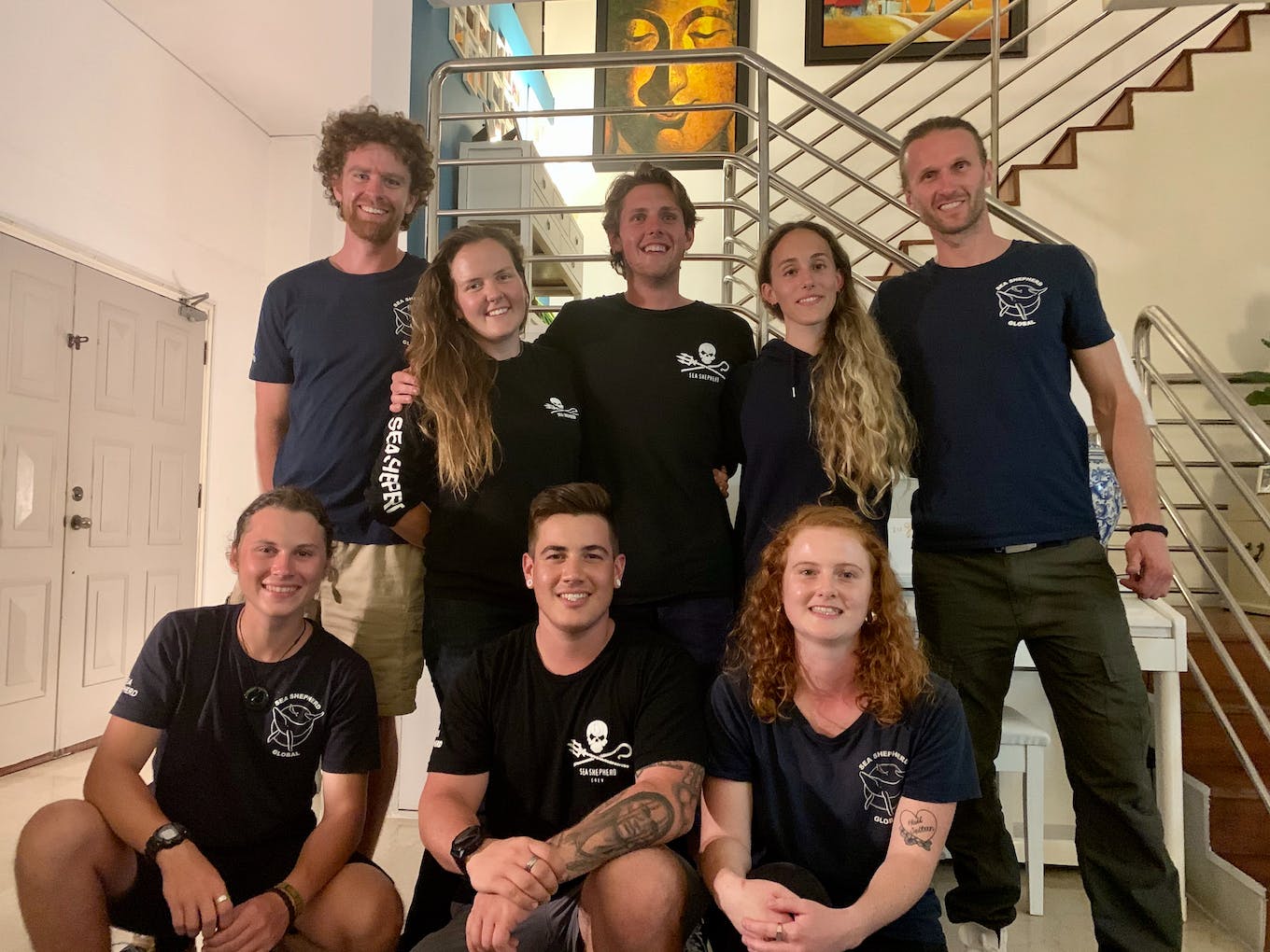 The Sea Shepherd crew from the Ocean Warrior at a private gathering for supporters in Singapore on Wednesday 5 February. Captain Casariego is pictured in the top row, second from the right. Image: Eco-Business

Garnering local support is “fundamental” to Sea Shepherd’s cause, and the NGO is keen to bring on more Asian crew members to volunteer, said Casariego.

So, what can people in this region do to help Sea Shepherd’s cause? Besides donate, Casariego said that reducing plastic use and seafood consumption are key first steps to help the oceans.

If we continue to eat fish, then at least “be conscious of where it’s caught”, she said.