Can Asean balance growth and sustainability in post-Covid infrastructure development?

Private sector investment is needed if Southeast Asia is to address the sustainable infrastructure investment gap that has widened with the Covid-19 pandemic. But investors want to see a stable regulatory climate and more certainty of profits before seizing Asean’s green infrastructure opportunity, say experts.

As the countries of the Association of Southeast Asian Nations (Asean) emerge from the fog of the Covid-19 pandemic, governments have been looking to invest in infrastructure to revive ailing economies, but experts are concerned about the type of infrastructure being planned in one of the world’s most climate-vulnerable regions.

Speaking on a webinar that is part of Temasek’s Ecosperity Conversations series titled Infrastructure of the Future: Financing Sustainable Growth in Asean, Tay said that it was “critical” for green finance to fill infrastructure investment gaps in the region, which have been widened by the pandemic.

Historically, Asean has looked overseas for investments, mainly from China and Japan, to make up shortfalls in infrastructure capital. However, China’s Belt and Road Initiative, for example, has drawn criticism for funding emissions-heavy infrastructure in Southeast Asia.

While infrastructure development in Asean has been mainly driven by governments, Tay said there was a need for more private sector finance for infrastructure, which, before the pandemic, presented businesses with a US$210 billion investment opportunity annually.

Sustainability efforts have been focused on environmental but not social factors—the shorter leg of the tree.

To put Asean on course to meet the Paris Agreement’s climate target of limiting global warming to 2 degrees Celsius, the region would need to raise renewable energy from 27 per cent of the energy mix by 2030—the current target—to 52 per cent by 2030, at an additional cost of US$70 billion, said Subash Narayanan, deputy head, project finance for DBS, Southeast Asia’s largest bank.

The funding gap to secure the region’s water infrastructure over the next 10 years is US$18 billion, while US$84 billion is needed for sustainable urban infrastructure, Narayanan noted.

But so far, the Covid-19 economic stimulus packages in the region have made barely any mention of green infrastructure or any other kind of sustainable development.

Singapore has Southeast Asia’s greenest stimulus package, according to ING’s analysis, with over 10 per cent of the city-state’s recovery budget going on green initiatives, including a green town programme for public housing and a target for phasing out internal combustion engine vehicles.

Malaysia is one of the few other Southeast Asian countries with clear green elements in its Covid-19 stimulus plan, including MYR13 billion (US$3 billion) on infrastructure projects to upgrade to LED street lighting, rooftop solar panels, and transmission lines.

Other Asean countries are moving towards green infrastructure but at different speeds, commented Meixi Gan, assistant director and sustainability programme lead for SIIA.

Indonesia, the region’s largest emitter, is working on a US$1 billion solar power initiative that could provide 22,000 jobs in the country hardest hit by the pandemic, but it has also passed a controversial revision to a law in June 2020 that activists say could expand the country’s coal and mineral mining industry.

By contrast, Vietnam, which has seen a wave of renewable energy investment in recent years, recently announced a new masterplan on power development that could scale back the country’s reliance on fossil fuels and usher in a new era for renewables.

Gan noted that Asean needs to balance economic growth with sustainability, and “develop a common understanding among all stakeholders – including financial institutions, multilateral organisations and project developers – of what sustainable infrastructure looks like.”

“This includes understanding the environmental and social risks associated with infrastructure development, and how to address them,” she said. 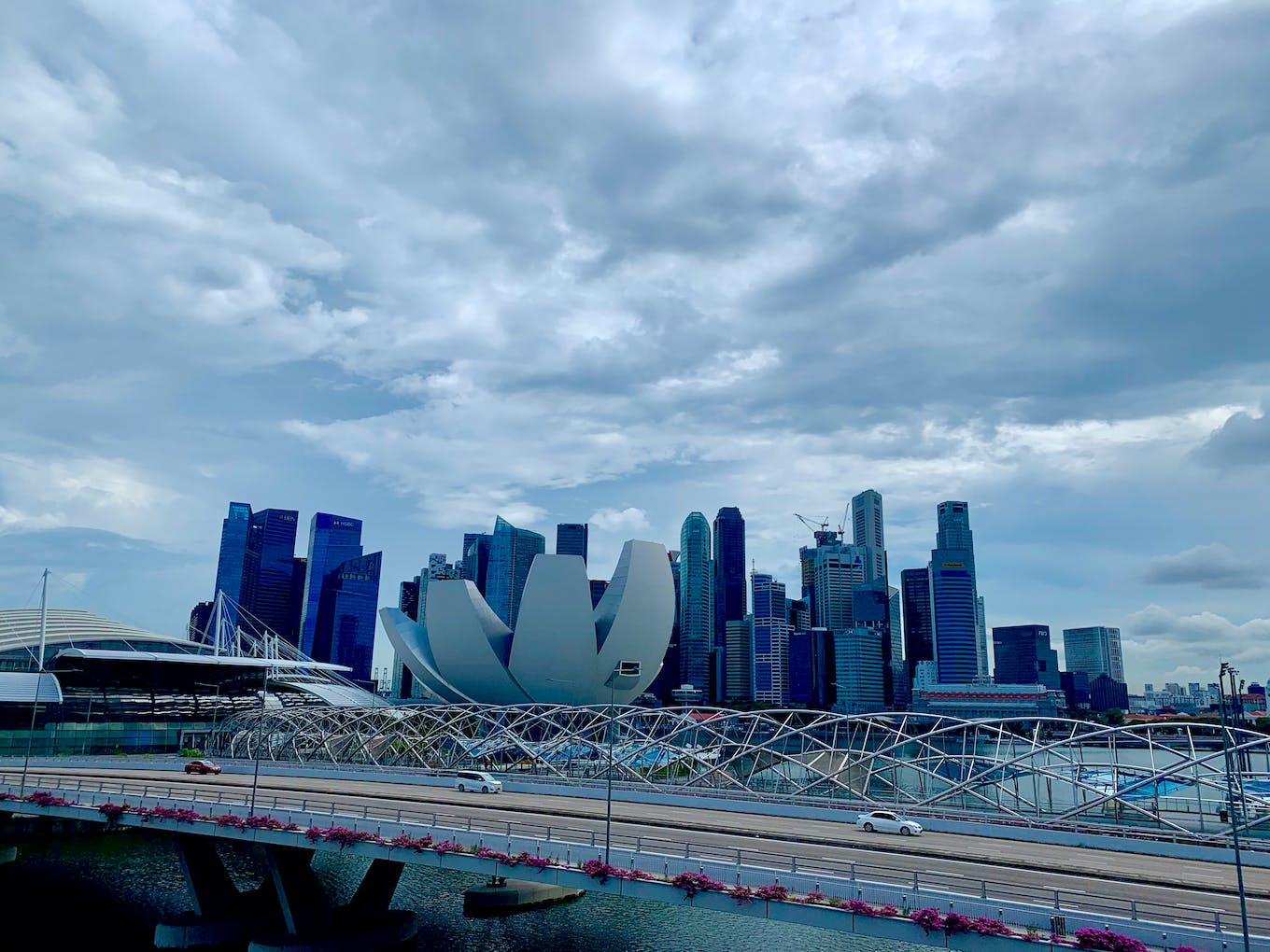 The Singapore skyline. Singapore is positioning itself as a regional hub for green finance as Southeast Asia looks to infrastructure to revive ailing economies. Image: Robin Hicks/Eco-Business

While the cost of renewable energy has fallen significantly over the last decade, investors and financiers looking at Southeast Asia are still concerned about generating returns, and worry about stranded assets, said Narayanan.

The financial viability of a project, and whether or not a bank will support it—known as bankability—is another obstacle, and investors need assurances through feed-in tariffs and other support mechanisms, he said.

Grid capacity is another issue. Even in developed countries, grid connectivity issues and black-outs have curtailed renewables projects, Narayanan said.

Pockets of activity around the region point to a brighter future for renewables, even during a pandemic, which has caused project delays and disrupted supply chains for the materials needed to build wind and solar farms.

Robin Pho is founder and CEO of Right People Renewable Energy, a Singapore-based startup that sets up offgrid renewables projects in Southeast Asia, replacing diesel generators with solar panels and batteries. He said for renewable projects to be bankable, do not expect financing to come from just one party.

“Developers must be astute in seeking the right financing for the right phase of the projects and work on the financial engineering, he said, adding that a combination of grants, debt and equity—or blended finance—is often the best way to ensure renewables projects work.

Another promising path for renewables is through companies that have committed to reduce their carbon footprints. LYS Energy Solutions is a Singapore-based firm that specialises in corporate renewable energy. It shared that during the Covid-19 outbreak, it has signed 22 megawatt-peak (MWp) worth of deals in Malaysia, 15MWp in Vietnam and 12MWp in Singapore.

But even so, few expect 2020 to be a breakthrough year for clean energy infrastructure. Bloomberg New Energy Finance has lowered its 2020 global solar demand forecast by 9 per cent, while energy consultancy Wood Mackenzie has dropped its 2020 expectations for wind energy installations by 6.5 per cent.

The rise of social infrastructure

Lockdowns have temporarily unclogged the region’s metropolises, giving urban planners space to think about how less busy public spaces and a larger workforce working from home could influence city design. Bicycle lanes have been trialled on Manila’s arterial freeway EDSA and Jakarta planners are thinking about how to fund a better public transport system now that plans to move the capital to East Kalimantan are on hold.

The crowding of public parks in Kuala Lumpur once movement restrictions were lifted showed that Malaysians don’t want to just hang out in shopping malls, and there have been calls for more recreational parks and other green spaces to make the Malaysian capital more pedestrian-friendly. Investment should focus on gaps in healthcare, sanitation, affordable housing and other forms of “social infrastructure” exposed by the pandemic, Pang said.

“Sustainability efforts have been focused on environmental and economic but not social factors—the shorter leg of the tree,” he noted.

Southeast Asia needs a lot of private capital, and investors and financiers need stable regulatory support systems… If we can achieve that, a lot of money will flow into the region.

Even in Singapore, infrastructure will need to be re-thought for the post-Covid-19 era, said Pang. He pointed to Health City Novena, an integrated healthcare complex planned by 2030 that incorporates education, commercial, leisure and public spaces in the same ecosystem. “How will people be segregated when a pandemic hits?” he said.

The pandemic has also raised the alarm about food security as supply chains have been disrupted. In Singapore, which depends on Malaysia for much of its food supply, there has been a surge in interest in urban farming as people clamour to learn how to grow their own food. Local NGOs have called for military land to be used to grow “food forests”, arguing that food security should be a matter of national security in the city-state. Infrastructure of the future will be shaped by changes in behaviour, such as the rise in telemedicine, e-commerce and less commuting to work, Pang noted. In the future, will we need big hospitals, offices or airports?

“A lot of the infrastructure [in the near future] will be smaller scale and cater to local communities,” Pang predicted.

Technology will be key to making this happen. In South Korea, people in quarantine have used self-diagnostic apps to keep medical staff up to date, and an interactive map helped citizens stay away from areas with high infection rates. Now city planners will be thinking about how pandemic-time innovations could become permanent features of city living. Could virtual and augmented reality be used to homeschool children, and smart technologies deployed to make traffic jams a thing of the past?

To mobilise the capital needed to realise Southeast Asia’s cities of the future, infrastructure projects must be profitable to woo the private sector, speakers agreed.

“Right now only 5 per cent of institutional investor funding goes into infrastructure,” said Pang. “There’s still a long way to go—and it will only happen if there’s a profit motive.” He also noted that in addition to multilateral banks, non-governmental organisations were increasingly key players.

Earlier this year, foundations including Bloomberg Philanthropies sunk US$50 million into renewables projects in Southeast Asia.

Could Asean play a role too? Tay said that despite its efforts to promote green finance initiatives such as infrastructure bonds, the intergovernmental organisation is not yet a major driver.

“Infrastructure in Asean will be driven by national governments as well as donors, such as China’s Belt and Road Initiative and Japan. The private sector needs to play a bigger role, and Singapore can step up as a green finance hub for the region,” he said.

This article was based on discussions at a Ecosperity Conversations webinar held by Temasek in August. Watch the webinar here.