Greening the financing of a US$12 trillion development project that promises to help 60 per cent of humanity is necessary to avoid runaway climate change, a new report by Tsinghua University has cautioned.

China’s Belt and Road Initiative (BRI), one of the most ambitious infrastructure projects in history, promises to improve the lives of 60 per cent of the world’s population by investing US$12 trillion in roads, railways, ports, power stations, and telecommunications links in 126 countries, from South America to Southeast Asia, over the next 30 years.

But if that investment is spent on carbon-intensive infrastructure such as coal-fired power stations, steel and cement production and traditional transport, the world could be set on the path for near-3 degrees Celsius warming, a report co-authored by prominent Chinese environmentalist Dr Ma Jun has warned.

If the global temperature increases by that amount by the end of this century, a catastrophic chain of climate events will be set off that could lead to extreme water and food shortages and global agricultural failure.

BRI could support green, low-carbon, and climate resilient development across 60 per cent of the world’s population and a quarter of global GDP. 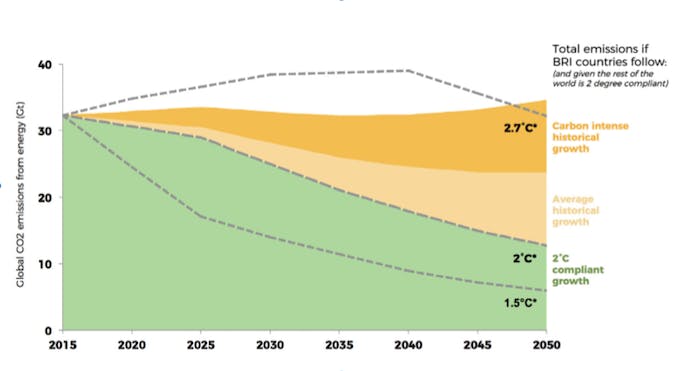 If the 126 Belt and Road Countires do nothing to decarbonise development projects, a near-3 degree increase in global temperature could result (click to enlarge). Image: Decarbonising the Belt and Road

The Decarbonising the Belt and Road: A Green Finance Roadmap report is the first study into the warming story behind China’s historic development project.

The 126 BRI countries including Indonesia, Turkey, Bangladesh and Malaysia accounted for only 28 per cent of global carbon emissions in 2015, but by 2050, the year after the Belt and Road project is slated for completion, this share could rocket to 66 per cent—if the rest of the world decarbonises but BRI nations do not.

Of the BRI energy projects in the pipeline, more than a quarter are slated to be coal powered—and coal is the single biggest contributor to climate change. These investments could lead to “carbon lock-in” due to the long-lived nature of infrastructure assets, the report by Tsinghua University, Vivid Economics and ClimateWorks Foundation cautioned.

China is the world’s biggest investor in coal power beyond its borders, and BRI is regarded by some observers as a plan to absorb China’s overcapacity in coal, steel and cement production to boost the domestic economy while cleaning up the environment at home.

The report recommends ways to decarbonise BRI investments in key countries including Indonesia, the Philippines, Myanmar, Pakistan and Sri Lanka—nations that are projected to experience brisk economic growth over the next three decades.

One recommendation is to set up an international platform, perhaps backed by the United Nations, to boost green finance in BRI countries.

The report also stressed the need for China to mandate the same principles that it applies at home to investments that it makes in countries where environmental standards and regulations are often lax. One way of doing this would be to apply compulsory environmental impact assessments for Chinese investments in BRI countries.

Another way to green the Belt and Road is greater transparency. The report proposes that the climate impacts of BRI projects are disclosed, drawing on platforms such as Task Force on Climate Related Risk Disclosure and Carbon Disclosure Project to devise green development metrics.

Ilmi Granoff, director of the sustainable finance programme at non-profit ClimateWorks Foundation, said that BRI will make investment decisions now that could “permanently alter the development pathway of China and its initiative partners countries, and the climate outcome for the globe.”