Environmental advocates say the project will obstruct water flows to dozens of irrigation sites across the island’s west.

Concerns over a major highway project in Bali are mounting, with a new study revealing how the road would affect the island’s signature farmlands.

The idea of building a second toll road on the island, a world-famous tourist destination, was bounced around for years before materialising in August 2020, when the plan entered the first stages of a feasibility study.

Since then, the project has come under scrutiny from residents who risk losing their homes to make way for the project and from environmental advocates who warn of damage to agricultural lands and protected conservation areas.

In a report released Oct. 31, the Indonesian Forum for the Environment (Walhi), the country’s biggest green NGO, pinpointed the agricultural areas in danger of being cleared for the project. Walhi contends the road will shatter Bali’s centuries-old irrigation system, known as subak. The system is an integral part of the “cultural landscape of Bali” that UNESCO in 2012 inscribed as a World Heritage Site.

The Gilimanuk-Mengwi toll road, scheduled for completion in 2024, will cover roughly 96 kilometres (60 miles) from the port of Gilimanuk on Bali’s western tip to the island’s capital and biggest city, Denpasar, in the south. The estimated cost of the project, to be funded by the private sector, is 19.3 trillion rupiah (US$1.35 billion).

Once in operation, the road will provide quick access to and from the western ferry port, help reduce traffic congestion during peak hours, and speed car travel from the neighboring island of Java.

The project is part of Indonesian President Joko Widodo’s national infrastructure push, with a slew of new airports, toll roads, dams and ports being planned and built across the archipelagic country.

Bali Governor I Wayan Koster has expressed his support for the Gilimanuk-Mengwi toll road, saying last year that it would improve logistics on the island.

But some Balinese say they fear the toll road will wreak havoc on the island’s iconic agriculture. The project is expected to occupy hundreds of hectares of wet and dry lands in the western Bali district of Jembrana, including rice fields, forests and parts of West Bali National Park, according to Walhi.

The NGO says 481 hectares (1,189 acres) of rice fields would be breached by the project, including 34 subaks in Jembrana, 54 in Tabanan and nine in Badung. 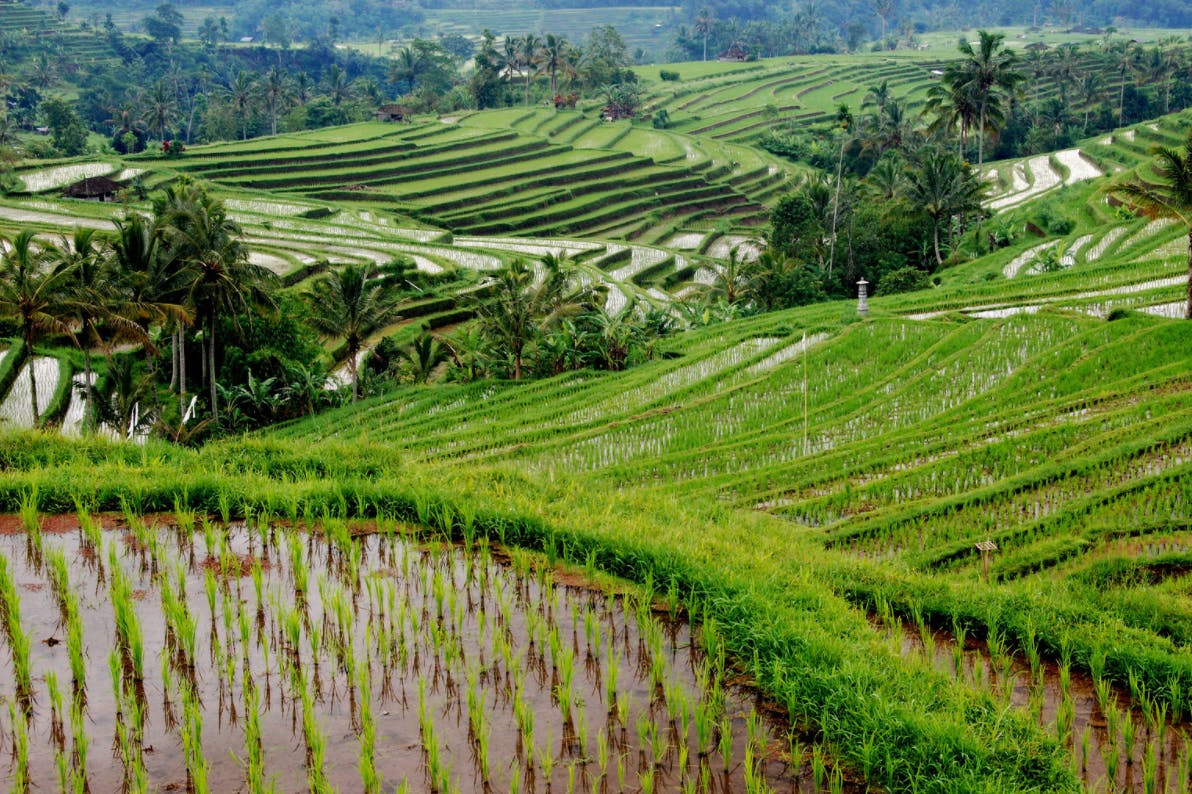 The Jatiluwih rice terraces in central Bali are a UNESCO world heritage site and a classic example of the subak system. Image: Trent Strohm, CC BY-NC-ND 2.0.

For thousands of years, subak has been at the heart of Bali’s agrarian society. The island’s mountainous terrain makes conventional irrigation challenging. Subak is essentially a water-sharing system bound by philosophy and trust, through which rice fields can obtain water from a single source interconnected by rivers and canals. In use for centuries, subak today has grown into more than just a community arrangement or farming technique shared by the Balinese — it represents the relationship between nature and the people.

I Wayan Windia, a professor of agriculture at Udayana University in Denpasar, spoke alongside Walhi campaigners at the launch of the report. The obstruction of water flows would bring with it the threat of flooding, he said, while the loss of farmland would impact Bali’s food security, and put the island at risk of diminishing its core culture.

“One rice field, on average, can contain up to 3,000 metric tons of water,” he said. “With 97 subak disappearing, where will the water go? And with a significant drop in productive rice fields, what will happen to the most important sustenance of our people?”

Walhi estimates the island’s rice fields yield at least 6 metric tons of the grain per hectare. If the toll road cuts across 188 hectares (465 acres) of rice fields, it would reduce Bali’s rice production by at least 1,128 metric tons, the group says. 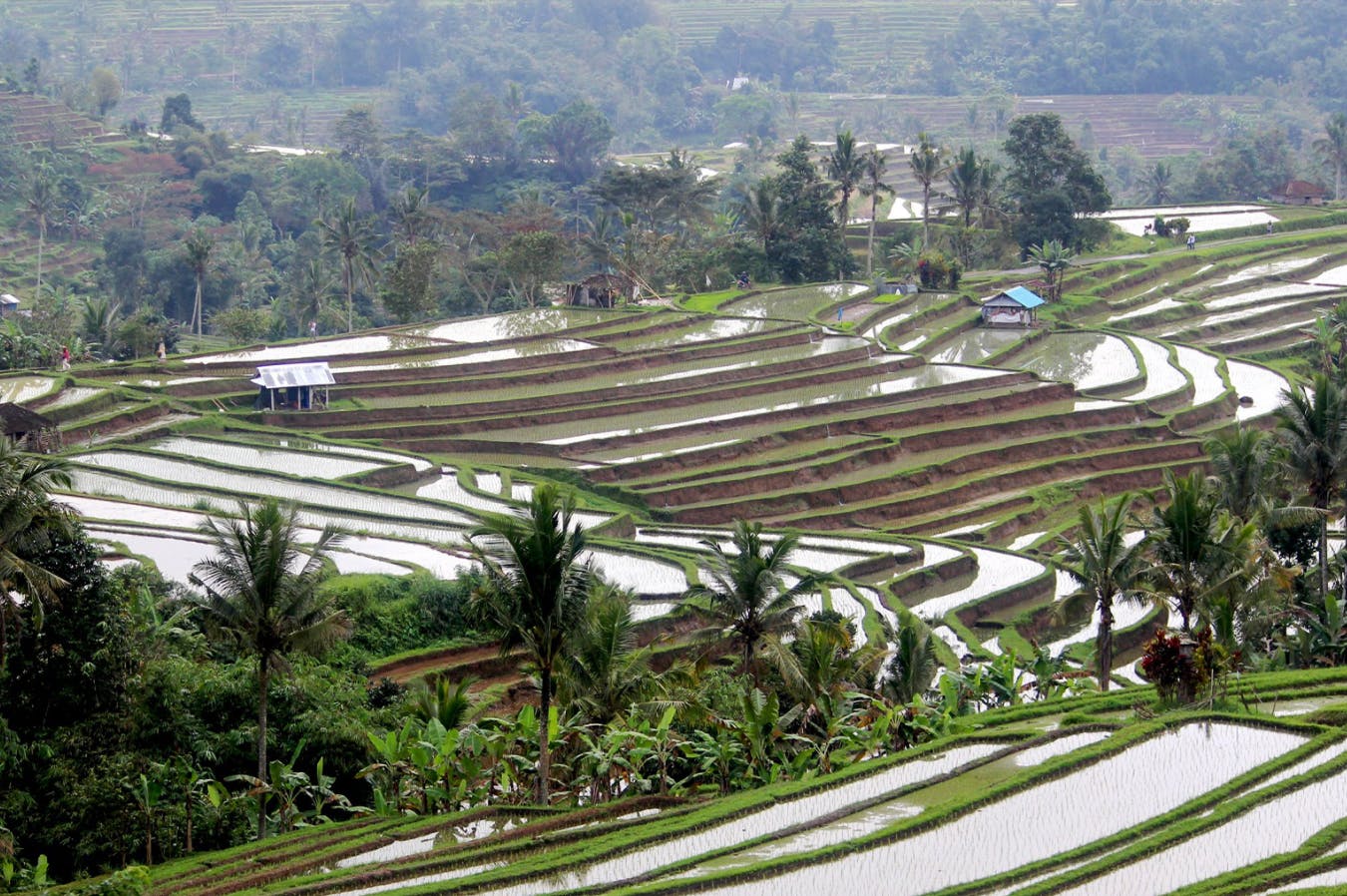 Nono Suparno, founder of Friends of Menjangan, a community conservation movement in western Bali, called this his worst nightmare. He said he fears the new toll road and its economic stimulus will give the green light to other construction projects, such as a long-mulled idea for an airport in the area.

While the project would create jobs, Nono said, it would lead to a change in lifestyle. There will be a drastic shift in mindset, he said — from nature to concrete.

“There is care and awareness for conservation for now,” he said. “It might be a different story once money gets into the picture.” 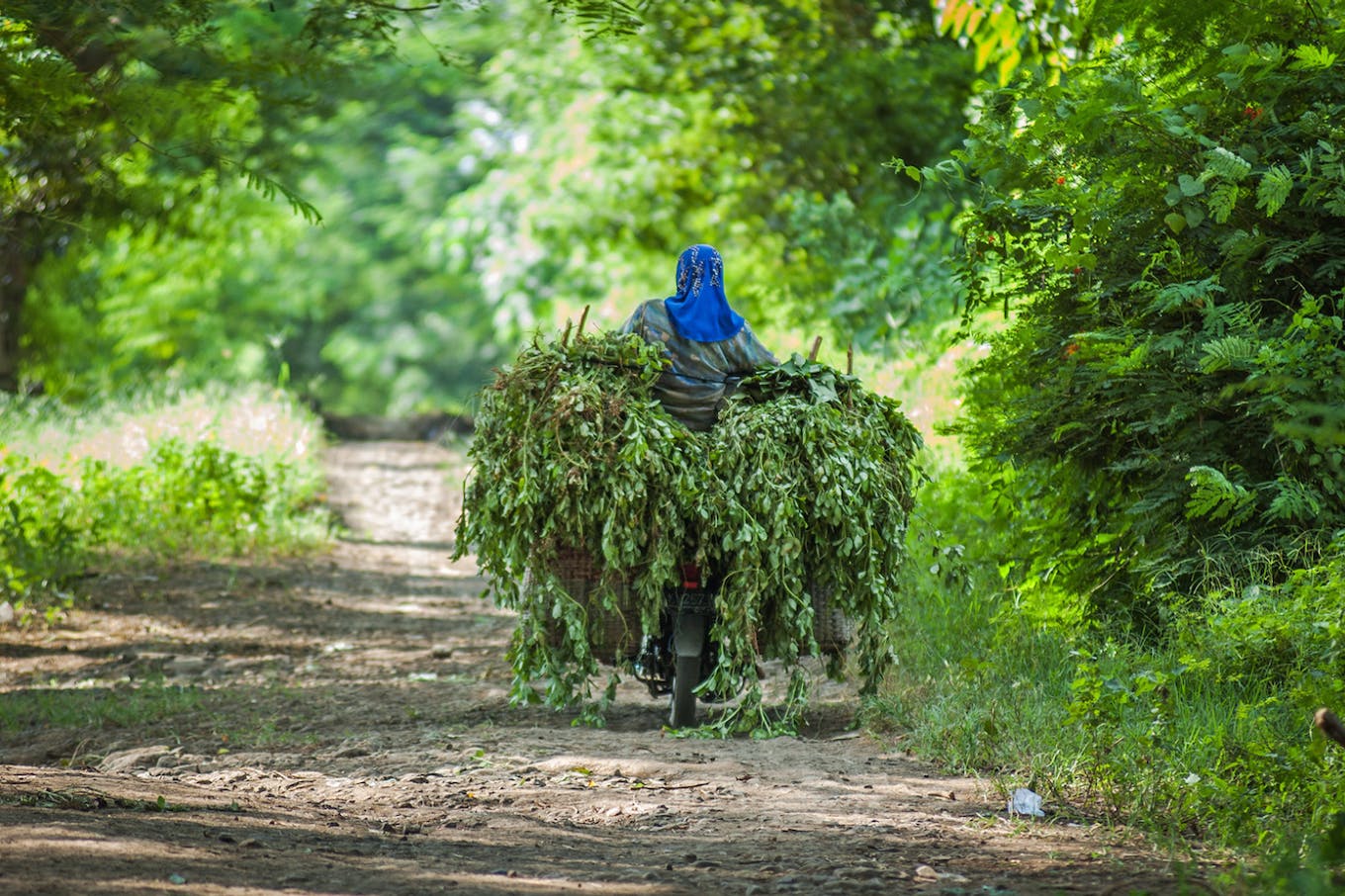 Many see western Bali as a money maker, the island’s highest contributor of non-tax state revenue. “Very few are willing to fight the battle because of this,” Nono said. “They ask themselves, what is the best bet? In the end, nature loses, tourism wins.”

Nono said the biodiversity around Menjangan, a tiny island in Bali’s northwest corner, is glorious at the moment, especially with the drop in tourists as a result of the Covid-19 pandemic. It would be a shame to see it come to grief, he said. However, he said he could also see how the project could play a role in helping Bali recover economically.

“We’ve been fighting for conservation in west Bali for a long time. There’s no backing down now. What we can do is maximise our actions to minimise the damage [of the construction],” he said. 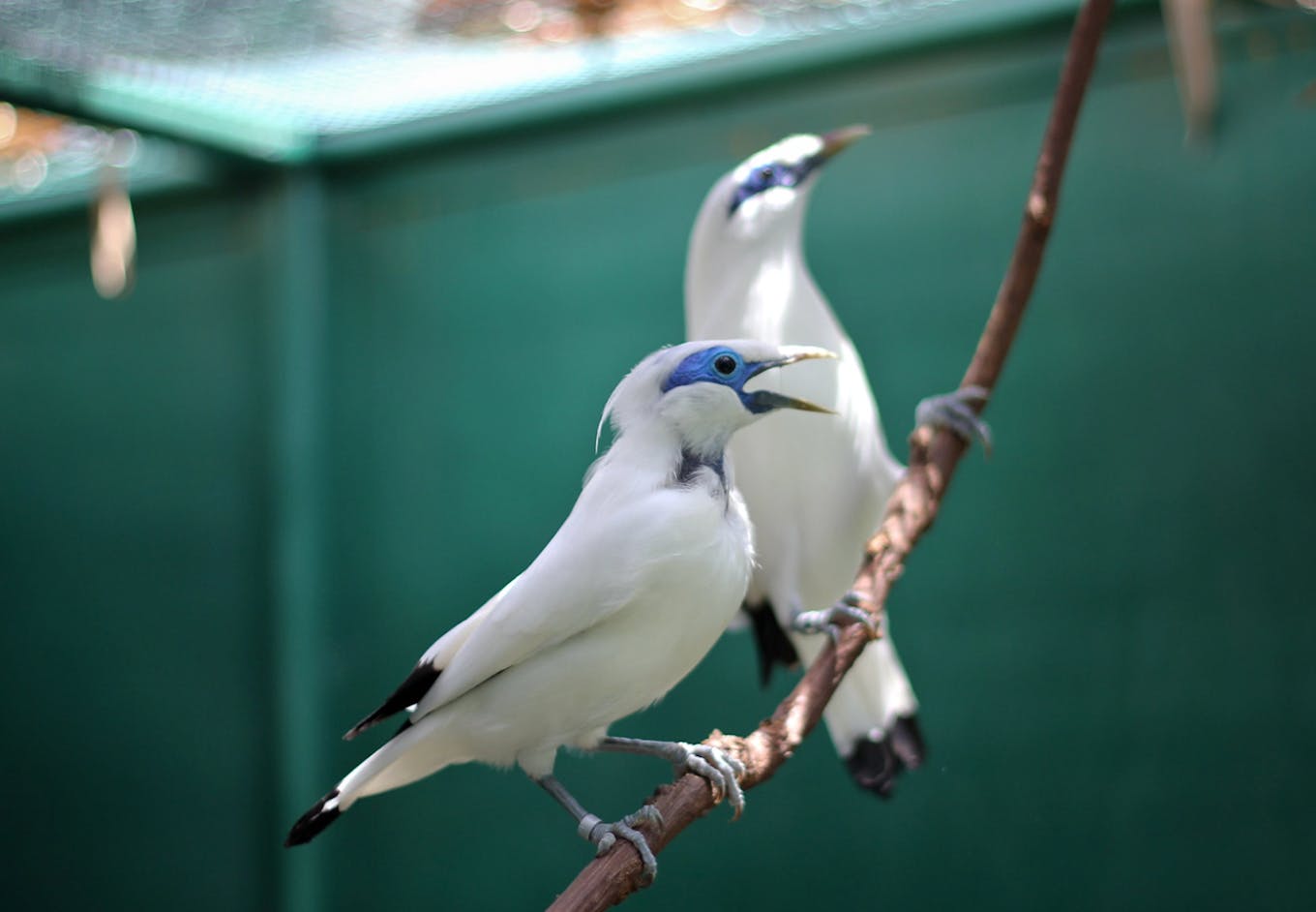 The Bali starling became the official mascot of Bali province in 1991. A critically endangered species, it almost went extinct due to its popularity in the songbird trade, but conservation interventions have helped it begin to rebound. Image: Matthew Kenwrick, CC BY-NC-ND 2.0.

Putu Yasa Arbawa, who manages the national park’s sanctuary for the critically endangered Bali starling (Leucopsar rothschildi), said the endemic bird might not be affected much by the project, but other species would.

“The jalak Bali are social creatures, they wouldn’t mind the noise,” he said, using the starling’s Indonesian name. “Butterflies, however, might get affected when they start to bring in loud machines. The construction would harm the migration of bats and other birds, too.”

Yasa added, “Nature and animals don’t have a voice. We can only try to stand up for it while supporting the plans to improve infrastructure. Perhaps we can try to arrive at a win-win situation.” 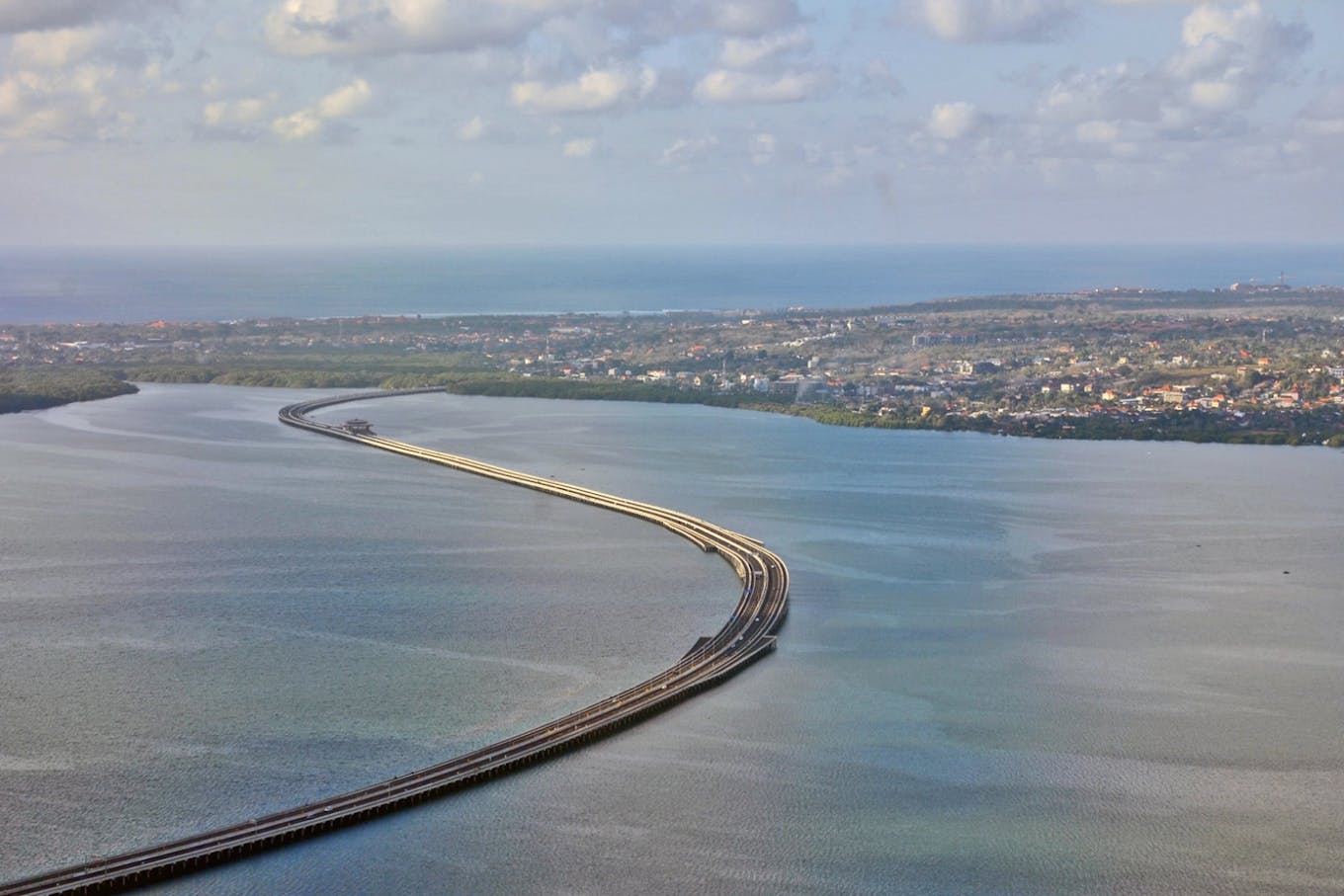 Along the 96-km stretch of the planned toll road, 22 villages in Bali’s Tabanan district would be affected, and the number could rise as the feasibility study progresses.

I Gusti Agung Alit Adiatmika, the head of Marga village in Tabanan, said many homeowners have refused to accept any compensation offered by the government for their land, even though there’s no definite scheme yet. But just the idea of the project is enough to raise concerns over land rights, given that there are no formal titles to much of these inherited lands, putting residents at risk of exploitation.

I Made Sumadra of Sumberklampok village shared his concerns as a worker at Labuan Lalang, the port to Menjangan Island. He said that while he supports government development initiatives, he’s worried about his mother, who stands to lose her 0.8-hectare (2-acre) plot right on the border of state land, and with it, her livelihood as a farmer. “You can only imagine what a loss it would be to my mother,” he told Mongabay.

Although compensation should go some way toward covering those financial losses, it’s the loss of livelihood that many here worry about once their lands are taken away. With Bali’s older farmers dispossessed, and its young people drawn to more “sophisticated” occupations, it’ll be hard to find people who want to continue the generations-old legacy of working the land, Sumadra said.

“What’s the future for our agriculture, then?” he said.