Asia's biggest firms are not joining the dots between biodiversity loss and business survival: study

A small fraction of Asia's publicly listed firms regard nature as business-critical. Asia's property companies are the most nature-conscious, healthcare firms the least. Japanese firms are the region's most active conservationists.

Climate risk may have shot up the corporate agenda in Asia in recent years, but why biodiversity matters to business has yet to sink in for boardrooms around the region.

Less than half of listed companies in Japan, Thailand, Hong Kong and Singapore make more than a passing reference to biodiversity in their company reports, and a small fraction of the region’s biggest firms have prioritised nature as a business-critical issue, according to the Asian Markets Biodiversity report card by Nature Positive, an environmental consultancy.

The research screened the reports and websites of 192 companies listed on four stock exchanges and documented how many firms referenced biodiversity, where biodiversity featured in materiality assessments, and the efforts companies are taking to address their impact on nature. 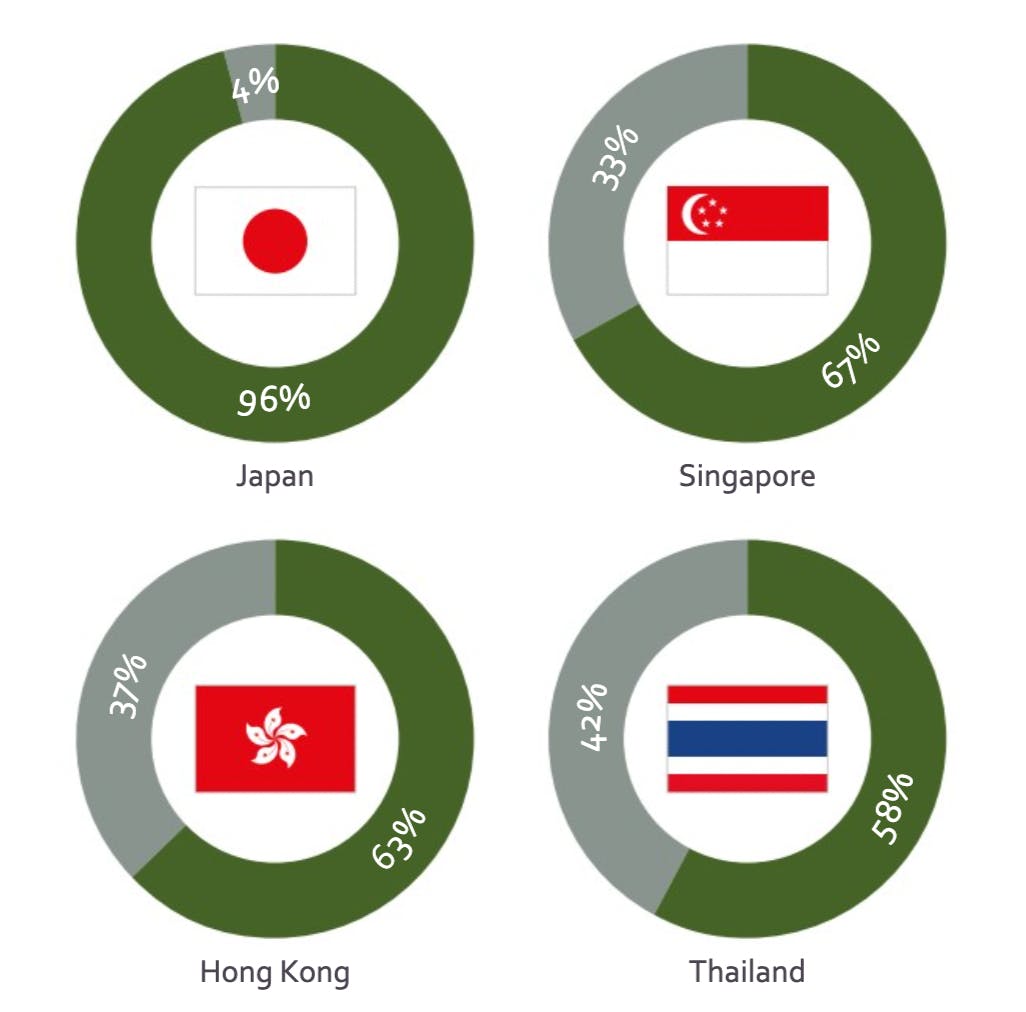 More than a fifth of companies (22 per cent) seem to use biodiversity as a buzzword, with no connection made between nature and how businesses rely on it for their survival, the report said.

Japanese companies are by far the regional leaders in seeing biodiversity as a business issue, and their common use of the term in company filings has skewed overall data, the report’s authors noted.

“I think companies struggle to get their head around their impacts and dependences on biodiversity and there is this misconception that this only applies to agriculture and food companies,” said Pei Ya Boon, regional conservation finance programme manager for non-profit Wildlife Conservation Society, who was interviewed for the study. 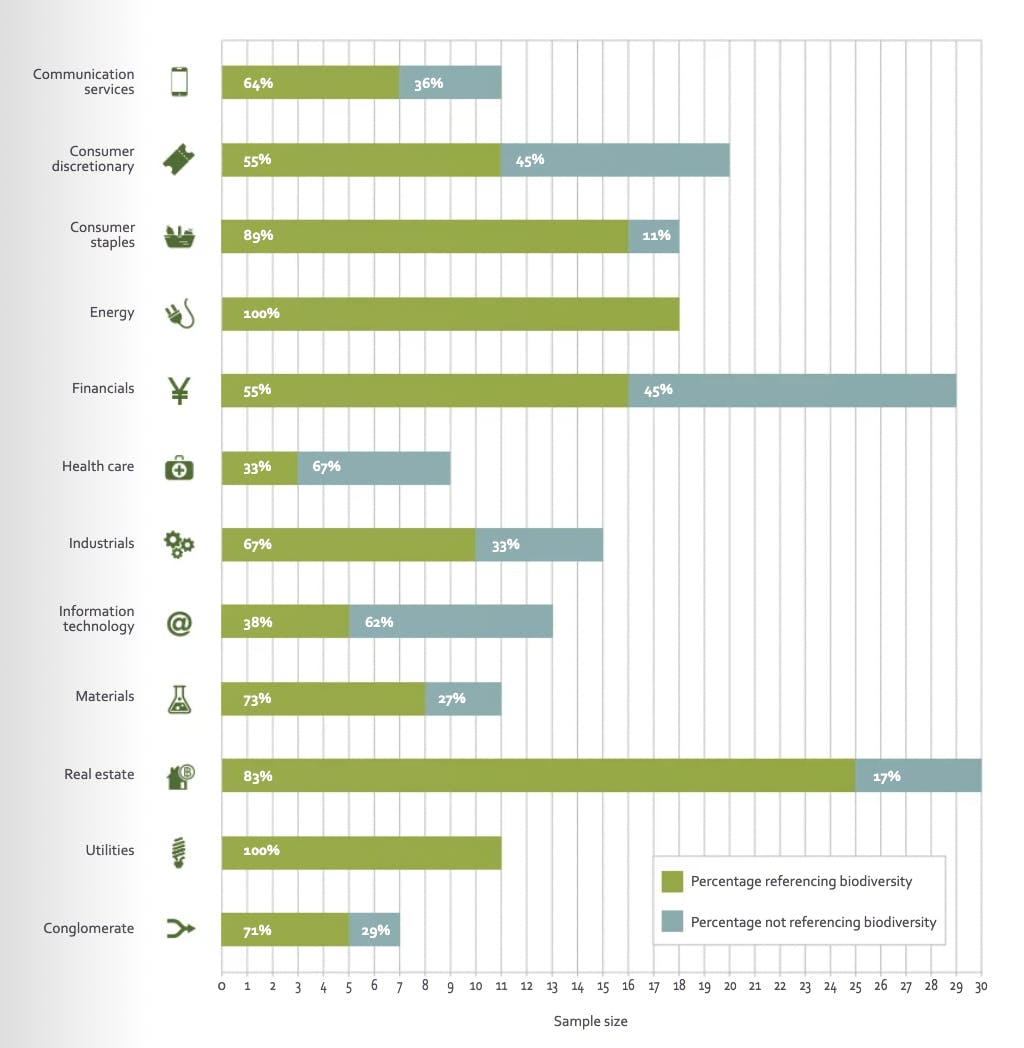 Though some companies are running conservation programmes, the report found no evidence of firms running audits on their biodiversity impacts, which makes it difficult to gauge how effective these programmes are at offsetting their impacts on nature.

The report’s authors noted that a focus on carbon and emissions reduction may have left businesses with little bandwidth to consider the value of biodiversity to their operations.

Nature Positive managing director Dr Stephanie Wray said that while it was encouraging to see some companies talking about biodiversity in a region losing natural areas as fast as anywhere on the planet, whether they are taking meaningful action to counter their impact on nature is questionable.

Only recently has the corporate world started to join the dots between biodiversity loss and business survival. Businesses depend on healthy ecosystem services for their production processes, to maintain soil, water and air quality, and build in resilience to climate change.

“Companies that are paying greater attention to biodiversity impacts are generally the ones that have already faced crises related to biodiversity issues or can clearly see the link between their business operations and biodiversity risks,” said Supakorn Ekachaiphiboon, deputy vice president, sustainable development at Stock Exchange of Thailand.

Singapore-listed palm oil company Wilmar, which has committed to weed deforestation out of its supply chain, was noted for its efforts to educate its supply chain on biodiversity impacts, while Philippines utility Manila Water was highlighted among the few companies to conduct a biodiversity audit.

The report emerges in the run-up to the United Nations Convention on Biological Diversity (COP15 also known as “nature COP”) in Montreal in December, where world leaders are expected to negotiate a deal to address biodiversity loss. The agreement aims to set a framework for the production and consumption of natural resources which could have implications for how businesses are run in Asia Pacific.

Nature Positive’s report suggested that frameworks such as Taskforce for Nature-related Financial Disclosures (TNFD) and tools such as science-based targets for nature would help Asian business better assess their relationship with biodiversity.

“Until we have common industry frameworks [such as TNFD and science-based targets for nature] providing guidance and clarity, I think [biodiversity] target-setting will be limited,” said Sue Mulhall, global lead for biodiversity and business partnerships, BirdLife International, a conservation group.

The report’s authors called on the region’s companies to evaluate how they rely on and impact nature and set biodiversity restoration targets.

A 2021 report by the Intergovernmental Science-Policy Platform on Biodiversity and Ecosystem Services (IPBES) found unprecedented decline in the natural world and a record rate of species extinctions. Nature has declined by 45 per cent in Asia Pacific since 1970, according to a report by World Wide Fund for Nature.