Just 12 Asian companies feature in a ranking of the world's 100 most sustainable companies, with Singapore firms suffering a sharp drop. Siemens was number one, last year's leader BMW fell out of the top 10.

Just 12 Asian firms feature in a global ranking of the world’s 100 most sustainable corporations, which this year was topped by German electronics giant Siemens.

While this was a repeat of last year’s tally for the region, most Asian companies have fallen in this year’s Global 100 Most Sustainable Corporations in the World index, an annual sustainability performance ranking for global listed companies compiled by Canadian investment research firm, Corporate Knights.

The only other Asian firms to appear in the top 50 were South Korean. Mining company POSCO ranked 35th, an improvement on 40th spot, which is now occupied by financial services giant Shinhan, itself down from 18th last year. 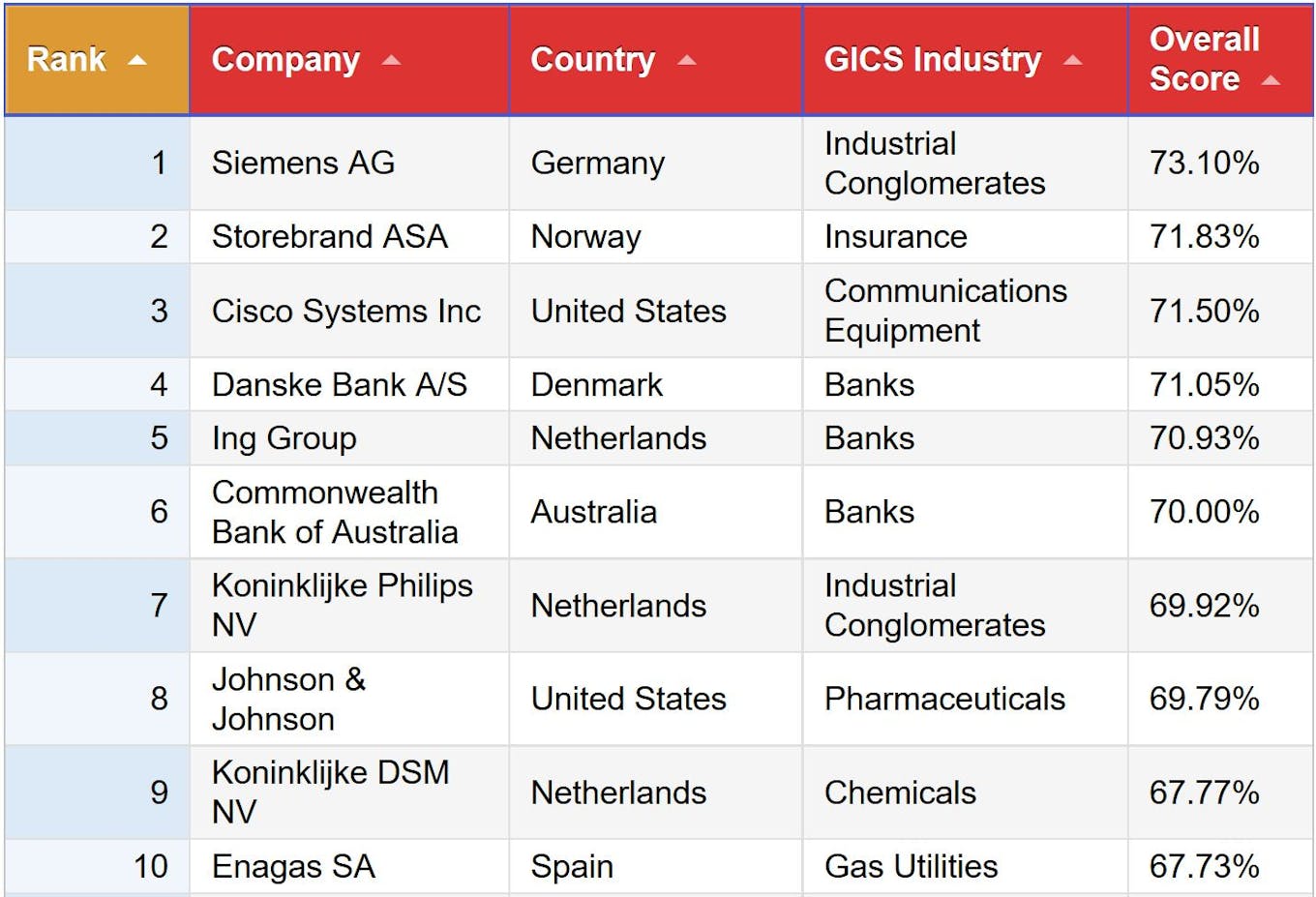 Top 10 of the Top 100 Global Most Sustainable Corporations in the World. Image: Corporate Knights

Singapore marine, property and infrastructure giant Keppel Corporation and property business CapitaLand both dropped out of the ranking this year.

Not only were Japanese companies the most numerous from Asia in the ranking, they also showed the most improvement year on year. Pharmaceuticals firms Takeda (67th) and Astellas Pharma (85) both moved up the ranking, as did medical IT company Sysmex Corp (70). Electronics giant NEC (86) appeared in the rankings for the first time.

He praised Singapore firms despite their slide in the rankings. “For a relatively small country, for Singapore to feature three companies [in the ranking] is admirable. Compare this with a large economy such as China for instance,” he told Eco-Business.

From ranking to ranking, it is usually the same Asian corporate leaders that show up. Where are the others?

Yow said that compared to their counterparts in other regions, Asian companies are struggling with a lack of emerging sustainability leaders. “From ranking to ranking, it is usually the same Asian corporate leaders that show up. Where are the others?”

Overall, Asian companies’ average ranking in the index fell from 59th in 2016 to 63rd this year.

“Stronger legislation around sustainability reporting, as in France, is a possible solution,” he said. He cited the country’s Grenelle II law, which was enacted in 2010 to mandate integrated sustainability and financial reporting for all large companies.

The ranking was announced last week on the sidelines of the World Economic Forum in Davos, Switzerland.

Corporate Knights chief Toby Heaps commented: “Global 100 companies are powerful exponents of the idea that doing more to help society and the planet can be financially rewarding.”

This year, Corporate Knights cast its net on 4,973 listed companies with a market capitalisation greater than $2 billion (USD) as of October 1, 2016.

Munich-headquartered Siemens AG, known for its electrification, medical diagnostics and industrial automation lines, outshone its peers with an overall score of 73.10 per cent, replacing last year’s table-topper BMW, which dropped out of the top 10.

BMW fell significantly because of a fall in energy productivity, higher staff turnover, and a lower score from its suppliers, Yow shared.

European firms dominated this year’s index, with 59 companies on the list. This is followed by 25 from North America and two from South America. An African company has yet to feature in the index.