The 2015 haze was blamed for the city-state suffering its dirtiest air in the past two decades, resulting to a spike in electricity use, found a report by the National University of Singapore. Has this changed amid the pandemic circuit breaker?

Record air pollution levels in Singapore at the height of the 2015 haze season caused a spike in electricity consumption among households, which in turn increased carbon emissions from the generation of electricity, a report by the National University of Singapore has revealed.

Titled Local pollution as a determinant of residential electricity demand, the study examined utility meter readings of 130,000 households in Singapore from 2012 to 2015. During that period, forest fires in Indonesia caused transboundary haze that affected air quality in Singapore and Malaysia for months at a stretch.

Pollutants like fine particulate matter, or PM2.5, were caused mostly by “land fires that moved upwind from neighbouring countries, as observed in September and October 2015”, Alberto Salvo, lead author of the study, told Eco-Business.

PM2.5 can penetrate deeply in to the lungs, causing breathing problems or burning sensation in the eyes. 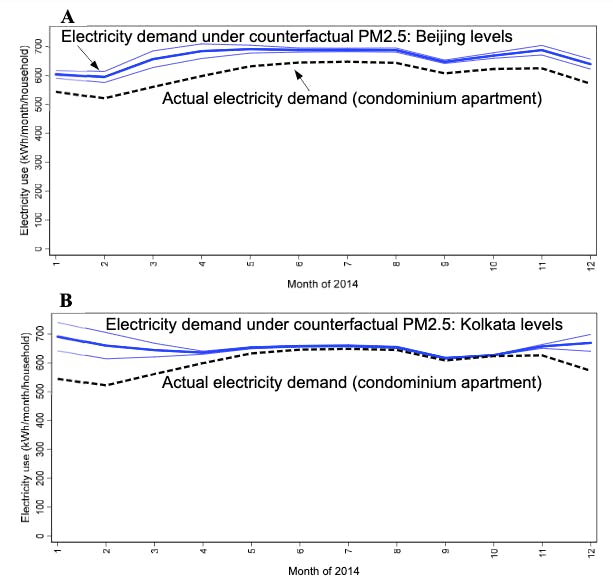 Electricity consumption grew by 1.1 per cent when PM2.5 rose by 10 micrograms per cubic metre (μg/m³), according to the findings published in the Journal of the Association of Environmental and Resource Economists last month. Almost 60 per cent of respondents surveyed said they keep the air-conditioning running while sleeping in the absence of a haze event, but the figure climbed to 75 per cent during the haze season.

The results of the study also highlighted an economic divide among residents, with PM2.5 having a larger percentage impact on electricity demand among higher-income households with greater access to air conditioning. It was observed that when PM2.5 went up by 10 μg/m³, electricity consumption among more upscale condominium dwellers jumped by 1.5 per cent, compared to a 0.75 per cent increase by lower-income households in one- to two-room public flats.

Higher-income households were more likely to turn on air-conditioners and air purifiers when at home. The 1.5 per cent spike in electricity consumption among these households was equivalent to running the air-conditioner for an extra 10 hours per month. At the time of study, 14 per cent of one- and two-room public flats had air-conditioning, compared with 99 per cent of condominium apartments.

“This study shows that households care about the quality of the air that they breathe, revealed through their spending on utilities, in particular, to power air conditioners,” said Salvo, who is an associate professor at NUS’ department of economics. “However, lower-income households are less able to afford such defensive spending on utilities. This observed inequality in defensive behavior may also exacerbate health inequalities, especially in developing countries.”

The report did not measure indoor pollution, where levels are considered by experts to be two to five times higher than those outdoors. Air inside homes or offices may consist of PM2.5 entering from outside through open windows or poorly insulated buildings, chemicals such as formaldehyde, volatile organic compounds (VOCs) and carbon dioxide, which are harmful to health.

“While indoor air pollution can be high in certain parts of the world, for example, due to the use of traditional charcoal-fired stoves in poorly ventilated indoor spaces, this is not the case in Singapore,” Salvo explained when asked why indoor pollution was excluded from the analysis.

Did cleaner air during the partial lockdown lead to a decrease in electricity consumption?

The study did not analyse the impact of cleaner air on electricity demand during the pandemic. But Salvo acknowledged that consumer energy use could have increased in spite of cleaner air, simply because residents are staying home.

“There is cleaner air now due to less economic activity such as commuting (which) would, all else (being) equal, induce lower electricity demand, based on the study. But at the same time, more time spent at home during the circuit breaker would shift electricity demand (upwards), not because of increased air pollution,” said Salvo.

From 27 March to 31 May this year, a period which overlapped with Singapore’s Covid-19 partial lockdown, the country was able to curb emissions but concentrations of nitrogen dioxide—another major pollutant from fossil fuel combustion and road traffic— remained above recommended levels, found a report by international think tank Centre for Research on Energy and Clean Air (CREA).

The report’s lead author added that although nitrogen concentrations decreased after the circuit breaker from June to August, particularly around the eastern part of the country, they now match 2019 levels.

“Sources of pollution like transport, shipping and fossil fuel generation from (Singapore’s) gas plants and a coal plant in the area are back at their usual level of activity and emitting as they have in previous years,” Isabella Suarez, CREA analyst, told Eco-Business.

Singapore, one of the world’s most trade-dependent economies, allowed essential services in transportation and storage like shipping, safety and navigation services, port and terminal operations, and port marine services to remain open during the circuit breaker. Over the western region of the country, where four major gas plants are located and continued to operate, high levels of gaseous air pollutants persisted.