As Indonesians leave the cities for the countryside, how ready are farmers for the novel coronavirus?

The migration of millions of Indonesians from the virus hotspots in the cities to the countryside threatens the lives of farmers and their families as the annual harvest gets underway.

For the 40 million farmers and their families in Indonesia, the idea of working from home does not apply.

Some forms of agriculture are deemed essential services and a critical part of the food supply chain. But even if farmers were required to self-quarantine to mitigate the spread of the novel coronavirus—Indonesia’s relatively lax containment measures have imposed restrictions on travel but avoided lockdowns—most of the country’s smallholder farmers cannot afford to down tools. They need to work to feed their families, and it’s harvest time.

They are also among the most vulnerable people in the country of 268 million people. While Indonesians in the congested big cities are more likely to contract the virus (there is no official data that breaks down cases by region), they are also better equipped to cope with it. Medical supplies, disinfectant and testing kits are more readily available in urban areas.

“The only thing they can do on farms is social distancing, which is easier given the vast areas to move around in compared to congested cities. But hand sanitiser and face masks are non-existent,” said Indradi Soemardjan, treasurer of the Sustainable Coffee Platform of Indonesia (Scopi), a non-profit that promotes environmental sustainability and economic opportunities for coffee farmers.

It is a matter of time before the outbreak hits rural areas.

To protect themselves, many farmers drink Jamu, a herbal tonic that president Joko Widodo has claimed can help fend off the virus.

The coronavirus has not posed a serious threat to rural Indonesia until now. But that could quickly change. Indonesia is already seeing the virus spread faster than almost anywhere in the world, with infections quadrupling since the beginning of April. An exodus of people from cities to the provinces, partly because informal ‘gig economy’ workers have lost their jobs in the cities, and partly for the start of Ramadhan, is expected to lead to a spike in infections in the countryside—despite a ban on travel announced by the central government last week.

“It is just a matter of time before the outbreak hits rural areas,” said Soemardjan. “The government has no resources to do much of anything in rural areas.”

An additional worry for farmers is the price of their crops. The price of palm oil, one of Indonesia’s more lucrative crops, has slumped as demand from key buying markets like China, India and Europe has plunged. But smallholders have received little or no government aid to cope with the impact of coronavirus beyond electricity subsidies, noted Aida Greenbury, an advisor for palm oil farmers union Serikat Petani Kelapa Sawit.

“What farmers want is direct financial support from the government so they can survive for the next three months,” Greenbury said. “They [farmers] are scared. Their income is 20 to 30 per cent less now, and they’re worried that a possible lockdown will prevent them from harvesting.”

Without financial support, and with a weaker law enforcement presence on the ground to stop them, struggling farmers are more likely to use cheaper, more destructive farming practices such as slash and burn. Haze-causing fires, which are an annual scourge for much of the region, have already been reported in parts of Kalimantan and Sumatra, as the dry season gets underway. The choking haze poses an additional public health threat to a virus that attacks the lungs.

Another concern is that information about Covid-19 has been slow to get to rural communities in a country that has lost more lives to the virus than any in Asia outside of China. “The government was very late in responding to the pandemic—two to three months late—and it is only now that smallholder farmers are starting to learn about it,” Soemardjan told Eco-Business.

The lack of information is evident in the lack of concern about the disease among rural communities. A study by Kantar research on 14 April revealed that Indonesians living in small towns far from the urban epicentres of coronavirus are much more likely to believe that the outbreak will be over within a month compared to more circumspect urbanites.

According to interviews with smallholder oil palm farmers conducted by the Roundtable on Sustainable Palm Oil (RSPO), there is some awareness of the coronavirus and the precautions that need to be taken through government communications on television, radio and online, but awareness of the economic impact of the virus varies by region. 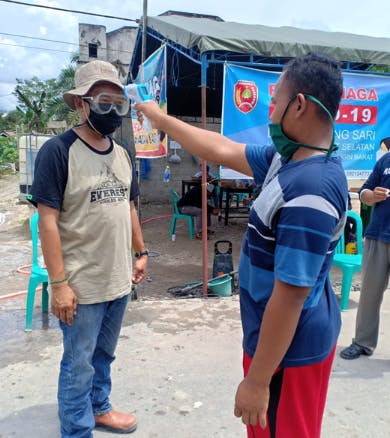 Zainanto, a smallholder farmer in Central Kalimantan, getting his temperature taken. Image: RSPO

RSPO-certified farmers in Jambi and Riau in Sumatra believe there will be no impact on the sale of fresh fruit bunches, while those in Pangkalan Bun in Kalimantan are wary of the impact on trade in the future. They are also worried about the impact of travel restrictions on their ability to conduct audits of their plantations to prove they’re being sustainably managed. RSPO is helping in that regard by allowing full audits to be postponed until travel restrictions are lifted.

Culture is also a key factor at play. Areas where there are large numbers of migrant workers on plantations, such as Central Kalimantan, could be particularly vulnerable. Most migrant labourers come from Java, where daily socialising is a big part of their culture, and making physical distancing rules work in a short period of time will be difficult, said Zainanto, group manager of smallholder collective Asosiasi Petani Kelapa Sawit Mandiri.

Despite the looming threat facing rural communities, some help is getting to farmers and their families through industry groups. Asosiasi Petani Kelapa Sawit Mandiri has allocated some money to buy hygiene products for farm workers, while Asosiasi Petani Berkah Mandah Lestari, another independent smallholder group, has set aside the incentives they receive from selling RSPO credits to buy rice for farmers.

Meanwhile, as people start to arrive from the cities to the countryside, Soemardjan said that new cases of the virus are inevitable, and provincial governments must ensure social distancing measures are imposed to safeguard the most vulnerable in village communities, particularly the elderly.

Some local authorities have done a good job of providing isolation shelters and vacant homes for homecoming migrants, but only about one per cent of the exodus crowd have been catered for, Soemardjan estimated.

More support will be needed from the authorities to cope with the expected rise in infections and an economic crunch that has been more an urban problem until now. “Harvest time requires labourers and rural working capital loans will be critical over the next six months,” Soemardjan said.