As forest blazes surge, experts call for a rethink in how to manage wildfires

More extreme fires are expected this century even if global warming is largely kept in check. The United Nations is urging governments to spend more money on planning, community aid and environmental restoration.

Extreme wildfires could happen 50 per cent more frequently by the end of this century, regardless of whether the world keeps global warming on a 1 degree Celsius or 2 degrees Celsius pathway.

Governments need to learn to manage risks and recover smartly from severe blazes, instead of being fixated on fighting fires, the United Nations Environment Programme advised in what it called the first comprehensive global assessment of wildfires, released on Wednesday.

The study, compiled by 52 authors from 17 countries, reviewed hundreds of studies of wildfires to analyse shifts in global wildfire patterns and how governments are responding to them.

It comes on the back of a series of catastrophic blazes in recent years, including some in permafrost areas of the Arctic circle.

The report found huge changes in where forest fires have been breaking out as a result of climate change, and the likely triggers of blazes.

For example, logging in forested land could result in piles of wood and debris that increase fire risk, while intense agriculture that destroys whole swaths of forests could reduce fire risk.

Using a model that predicted wildfire areas at the end of the century compared to the period between 1996 and 2005, the study found that wildfire risks could decrease significantly in parts of South America, as well as certain areas in East Africa, the Middle East and Australia. Meanwhile, risks could spike in Southeast Asia, East Asia and parts of the Russian Arctic. 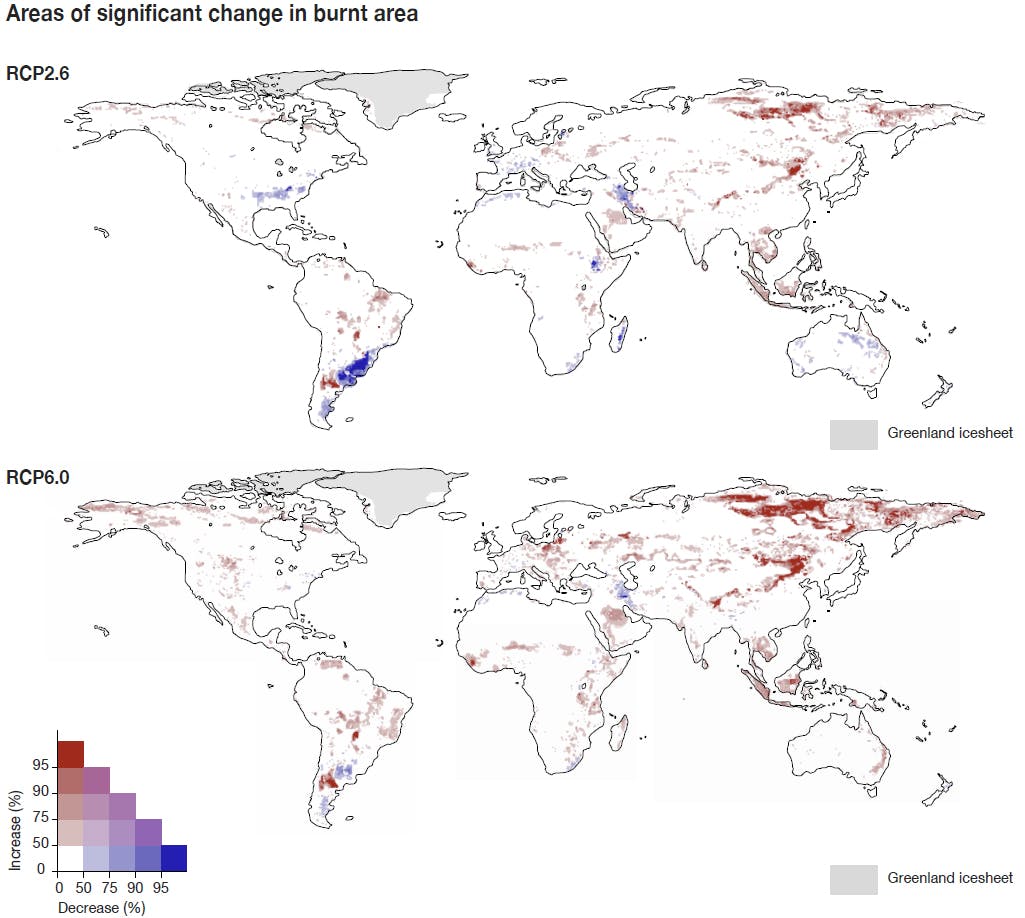 Projections of wildfire areas in 2090-2100, compared to 1996-2005. Red areas represent an increase in wildfires, while blue areas represent a decrease. The RCP2.6 scenario corresponds to a global temperature rise of 1 degree Celsius, while RCP6.0 corresponds to a rise of 2.2 degree Celsius. Image: United Nations Environment Programme. [click to enlarge]

Such events include the Australian “Black Summer” wildfires in 2019 and 2020, which burnt 5.8 million hectares, or 21 per cent of Australia’s temperate forests, and the Arctic fires in 2020, which raged through carbon-rich peatlands.

Projections of how one-in-a-hundred years fire events will rise by the end of the century, compared to the past decade. The RCP2.6 scenario corresponds to a global temperature rise of 1 degree Celsius, while RCP6.0 corresponds to a rise of 2.2 degree Celsius. Image: United Nations Environment Programme. [click to enlarge]

Wildfires could also spur the pace of global warming, which in turn causes more blazes, the report warned. Australia’s recent blazes were found to be made at least 30 per cent more likely by climate change.

Past studies estimate that wildfires are causing up to 8 per cent of the 3.3 million premature deaths yearly from poor air quality. Globally, over 4,400 species are also being threatened by changing fire patterns. 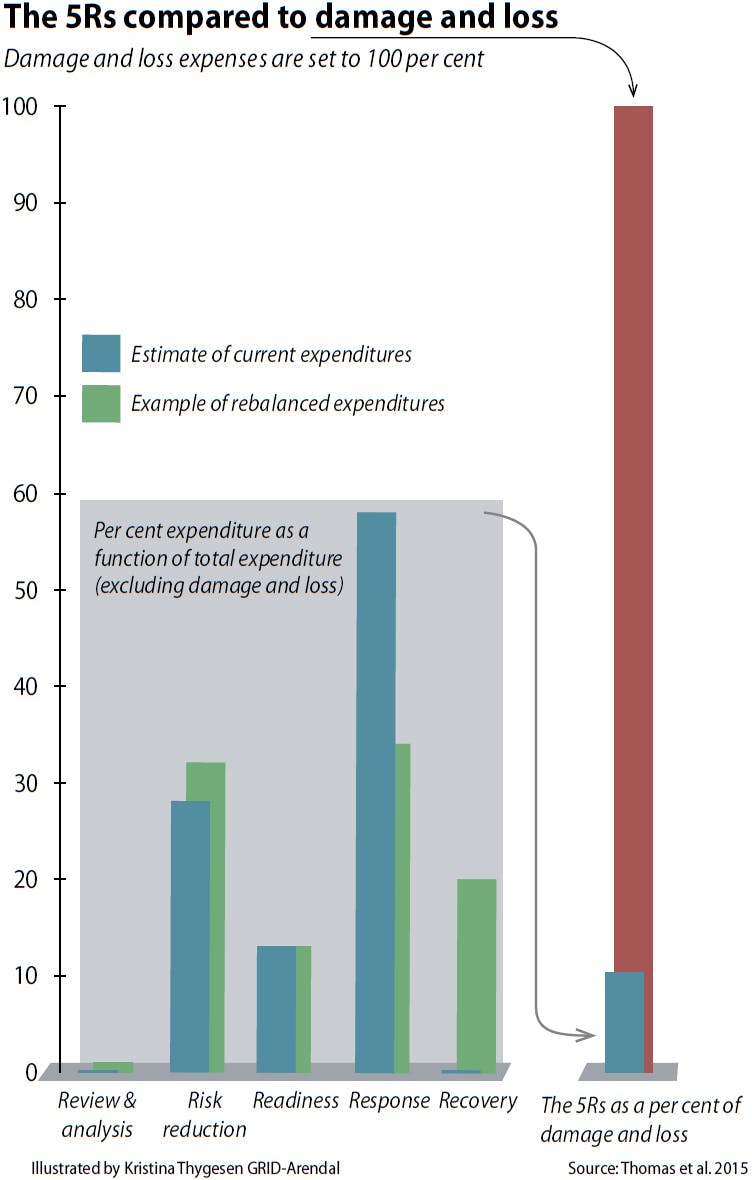 The report suggested sharply increasing the funding allocation for post-fire recovery, as well as planning efforts, while reducing the share for immediate fire response. Current spending on fire management adds up to about 10 per cent of total damages from forest blazes. Image: United Nations Environment Programme. [click to enlarge]

Researchers found that nearly 60 per cent of funds spent on wildfires today are allotted to fire response capabilities, such as firefighting and emergency services.

This was based on public sector spend data from the United States, which researchers said should closely represent spending in developed countries.

The review and analysis of fire threats was given just 0.2 per cent of funds – an imbalance the study said would hamper effective fire management and worsen damages. The study’s authors suggested boosting spend on fire analysis to 1 per cent of the budget.

“Worsening risk profiles are increasing the demand for detailed and timely intelligence on fire likelihood and threat,” the study said.

It added that not all fires require an immediate firefighting response, and small blazes could even help to reduce the amount of flammable material that may feed into larger catastrophes.

“Without a complete shift in standard operating practices, in many parts of the world we will continue with politically motivated decisions – public opinion in many places favours putting out fires at all costs,” the study added.

The report also suggested boosting funds for recovery efforts to 20 per cent of the budget, up from the current sub-1 per cent, for activities such as community aid, environmental restoration and infrastructure repairs.

To balance the budget, funds for fire response would be cut to just a third of total spend.

“Jurisdictions think that there’s a technological solution to wildfires,” said report editor Dr Andrew Sullivan at a media briefing earlier this week, which was held as a wildfire in Argentina was sweeping through 800,000 hectares of forests and farmlands.

“There is no technological solution to wildfires. It’s a holistic problem that needs a holistic solution,” added Sullivan, who heads the bushfire behaviour and risks team at the Commonwealth Scientific and Industrial Research Organisation, an Australian government agency.

Researchers add that the same due diligence should be applied to forest carbon projects, which are fast becoming popular as heavily emitting firms and countries look to fund decarbonisation projects.

Dr Glynis Humphrey from the University of Cape Town, who contributed to the report, suggested that wildfires should be incorporated and acknowledged in the United Nations’ Sustainable Development Goals, which tracks key environmental and social focus areas the world should address by 2030.

“Fire is so interdisciplinary and cuts across so many different sectors. It impacts society, culture, and climate,” Humphrey said. “It is integral that fire be placed in the same disaster management category as floods and droughts.”

“What will happen if we don’t improve our approach to fires? I suspect those of us who are still able to will be back here in five or 10 years’ time discussing another report of a similar nature, and will probably be very frustrated,” said contributing author Peter Moore from the UN Food and Agriculture Organization.