The ‘co-benefits’ could increase substantially if carbon prices worldwide are raised to what several western countries are charging today, they added.

The study adds to growing research on the use of carbon offsets, where firms or countries with high carbon emissions invest in projects to neutralise their greenhouse gas emissions. Proponents laud its potential to slash emissions; critics say some existing projects are badly underperforming.

“The investment in the protection of forests, their natural capital and their ongoing provision of services through carbon projects enables a financially viable and sustainable means of addressing other socio-economic and environmental issues beyond climate change,” the authors wrote.

“By assessing this potential in Southeast Asia, we demonstrate the potential of carbon finance to meet global climate and human development ambitions,” they added.

The scientists found that with a ‘conservative’ carbon price of US$5.80 per tonne of carbon dioxide, 114 million hectares, or 60 per cent of Southeast Asia’s forests, could make for profitable projects to prevent 835 megatonnes of CO₂ emissions a year from deforestation. That’s over a third of Southeast Asia’s total emissions in 2018.

According to lead author Dr Tasya Sarira from the National University of Singapore, the identified forest areas are deemed to be at risk based on a model that predicted tree loss up to 2029. Factors such as their distance from roads, railways and urban areas, as well as the opportunity cost of using those plots for agriculture can undermine a forest’s security.

Some of these plots are near farms and shelter birds and bugs that pollinate crops, allowing over 300,000 people to have a stable supply of food. Each hectare of protected forest and their wildlife in the Malaysian state of Sabah sustains 42 people.

The forest also act as sponges for pollutants, cleaning up freshwater sources. This is crucial along the Mekong River which flows through Myanmar, Laos and Thailand, and where farm pollutants and industrial areas contaminate drinking water.

Meanwhile, the forest plots also covered 25 million hectares of Key Biodiversity Areas, or sites deemed by the International Union for Conservation of Nature to house a large variety of wildlife. That’s over 30 per cent of the area of all the sites across Southeast Asia.

Almost 94 per cent of all identified forest plots provided for at least one of the additional functions, on top of saving carbon emissions. About 6 per cent of the plots, mainly in Thailand and Indonesia, support all the studied functions. 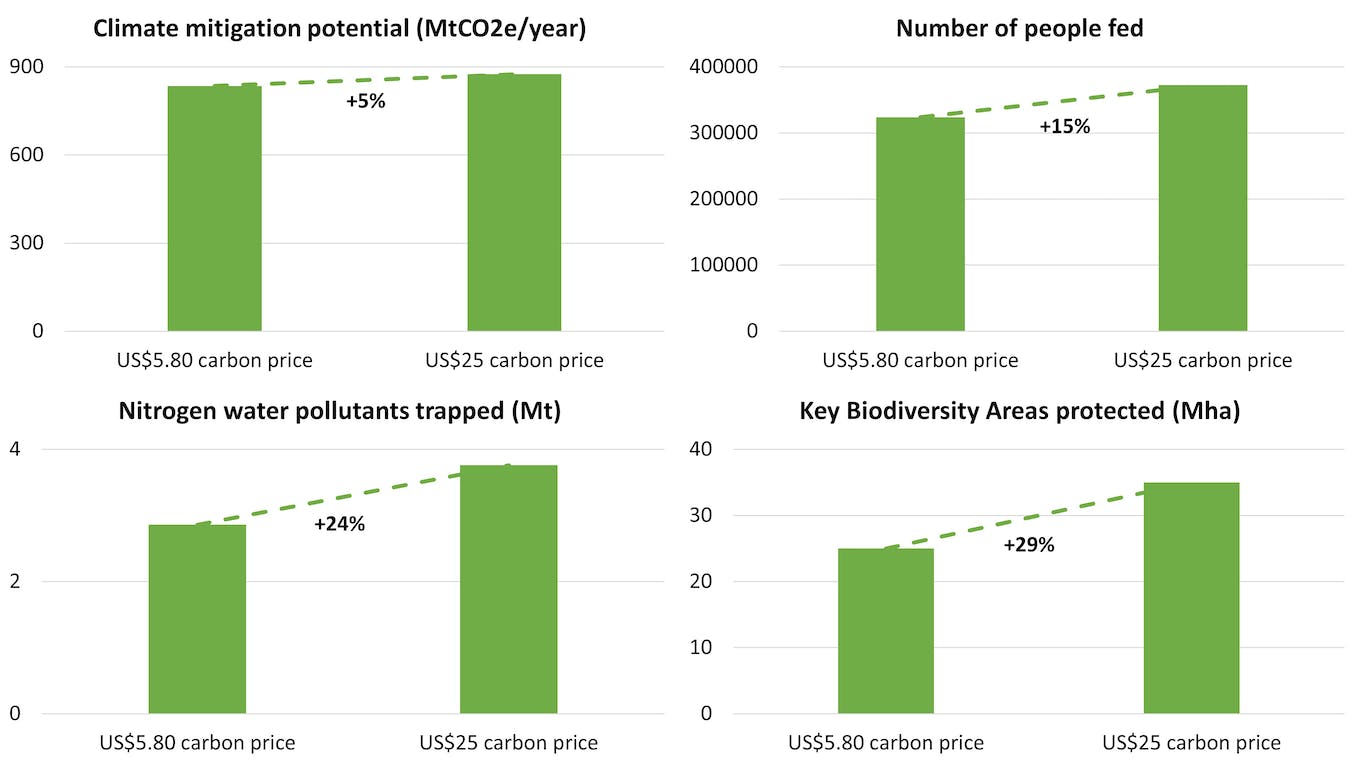 The increase in benefits from forest carbon projects, if the carbon price modelled is increased from US$5.80 per tonne to US$25. Data: Sarira et al.

The carbon price of US$5.80 used in the study is close to the rate countries including Argentina and Chile are charging. Singapore, the only country in Southeast Asia with a carbon price, currently charges US$3.70 per tonne of CO₂.

If the price was raised to around US$25 per tonne of CO₂ – similar to the cost in New Zealand or the United Kingdom, food security could be guaranteed for almost 50,000 more people, a quarter more water pollutants could be trapped, and 10 million more hectares of wildlife-rich areas could be conserved. Total carbon emissions prevented would rise 5 per cent.

“Such increases in carbon prices could promote the financial viability of carbon projects, allowing them to compete with other potentially lucrative land-use alternatives, such as palm oil production,” the authors wrote.

The increase in benefits largely taper off after the US$25 mark. Another five million hectares of key biodiversity areas could be protected at around US$80 per tonne of CO₂, though few countries charge at that range.

Supply of offsets has increased by 66 per cent annual since 2018, with a record 250 million offsets issued in 2021 through October, according to data from commodity research provider BloombergNEF (BNEF). The market is expected to balloon to US$200 billion by mid-century from US$0.6 billion in 2019.

Such projects are seen as a necessary complement to efforts that lower carbon emissions at power plants and factories, due to the short runway and huge reductions in carbon emissions needed.

Scientists estimate that the world can only emit 500 more gigatonnes of carbon dioxide to have a decent chance at keeping temperature rise to 1.5 degrees Celsius and avoiding the worst effects of global warming. Based on current emission rates, that budget will be used up in 10 years.

Much of the realised benefits of forest carbon projects would depend heavily on the implementation on the ground.

Investing in nature-based solutions, such as planting trees or preventing deforestation, is one of the most popular ways to offset carbon emissions. However, competing markets and lax regulation governing the nascent market has overshadowed their effectiveness.

In 2020, a Bloomberg investigation suggested that big forest projects by corporate heavyweights JPMorgan, Walt Disney and BlackRock were protecting trees in the United States that were never intended to be cut down.

Indigenous communities protested the deal, saying it made them more vulnerable to land-grabbing and displacement.

“In addition to better monitoring and standards in the verification of projects, much of the realised benefits of forest carbon projects would depend heavily on the implementation on the ground,” Sarira said.

“The consideration and involvement of the community is key to maximise the benefits that can be attained from the development of carbon projects,” she added.