Around the world in an electric car

Wiebe Wakker, a 30 year-old Dutchman, has travelled 51,000 km through 28 countries on a journey from the Netherlands to Australia in an electric car—relying on donations of food, a bed and electricity to get him there.

As of 4 October this year, Wiebe Wakker has been on the road for 569 days.

Relying on the generosity of others for food, a roof over his head and electricity, the 30-year-old Dutchman is traveling from the Netherlands to Australia in an electric car with no money, but a big goal.

With a mission to dispel the myth that electric vehicles (EVs) cannot match their fossil fuel-powered cousins when it comes to endurance, Wakker has so far travelled some 51,000 kilometres in an electric Volkswagen Golf, which has a 37 kilowatt hour (kWh) lithium-ion battery and a range of 200 km.

Wakker, whose journey has been supported by offers of accomodation through his website, Plug Me In, was in Singapore recently to meet with swingers in the sustainability space, though disappointingly, he did not bring his car to the city-state.

In this interview with Eco-Business, he shares how electric charging infrastructure varies around the world, asking for help in Asia, and why there’s no such thing as range anxiety.

You’ve come an awfully long way. Why didn’t you bring your car to Singapore?

I came here by bus. I was told by the Land Transport Authority that there are no officially approved charging stations in Singapore yet, so I wouldn’t be allowed to drive my car on the roads here.

Also, to drive a foreign car in Singapore, you need a vehicle entry permit, which costs S$35 (US$26) per day, and you need car insurance. In total, it would cost me 250 euros a week, which I can’t afford.

Singapore has surprised me. I thought it would be more advanced than other Asian countries, but I have not seen the kind of regulations that exist for electric cars here anywhere else in the world.

So, very different compared to your home country, then?

Yes. In the Netherlands, there is one charging station for every electric car—and there are 16,000 EVs in the country. It was a luxurious place to start my journey. If my car’s battery was down to 1 per cent charge, I was still pretty confident that I’d reach a charging station before running out of electricity.

A lot of people say they fear ‘range anxiety’—the fear of running out of charge—with electric cars. Have you experienced it much on your travels?

No, I don’t believe in it. I came up with my own term—’range excitement’. I travel from one host to another usually, but sometimes I have to travel up to 800km without anyone to meet me. In the morning, I start driving, and I wait until I have 10 per cent battery left and then I have to make a plan. That’s when I feel range excitement. 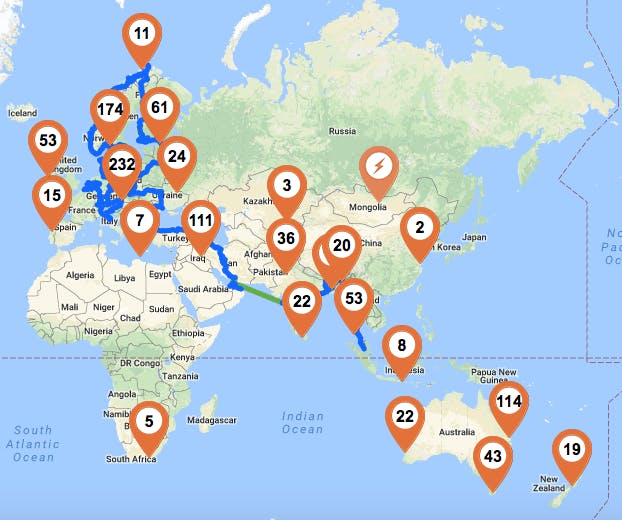 A map of where Wieber Wakker has travelled so far, with donations of electricity and lodging marked by the pins.

Tell us about asking for food, lodging and energy in Asia. Have you been refused much, or has the region been hospitable?

I did expect that people would be reluctant to support me when I entered Asia. But my project, to spread the word on electric mobility and sustainability, really helps. When I arrive somewhere in a big blue car it gets a lot of attention, and people are interested in my story. Most people have never seen an electric car, and are curious when I say I’ve driven all the way from Holland in one. I don’t think that people feel like they are not getting anything back, because I share my story about the trip, and they like to be part of that story.

How does electric vehicle charging infrastructure vary from country to country?

The second country on my journey was Belgium, and I only found one charging station in the whole country—in Brussels.

Italy was ok, but I had problems with the reliability of electricity at the charging stations. Sometimes the power would drop suddenly, the fuse would pop, and I’d have to wait 15 minutes until it would reset.

Ukraine was surprising. It was easy to get around the country using the charging network. I was told it’s because they want to be energy independent of Russia; if they drive electric, they don’t have to import petrol from across the border.

After Ukraine, I had to rely on charging the car using a regular socket in people’s homes or I’d stop at petrol stations and plug in there. In a charging station, it takes 4-5 hours. In a regular socket, about 12 hours.

What was your experience of charging infrastructure in Asia?

There were very few facilities in the countries I’ve visited so far. Malaysia has 220 charging stations, mostly in Kuala Lumpur. There were a handful in the major cities in India, none in Myanmar, and some in Bangkok. I had to charge in hotels in Thailand, because of the new rule that drivers of foreign vehicles in the country must be escorted by a government official and stay in hotels. That restricted my movements considerably. 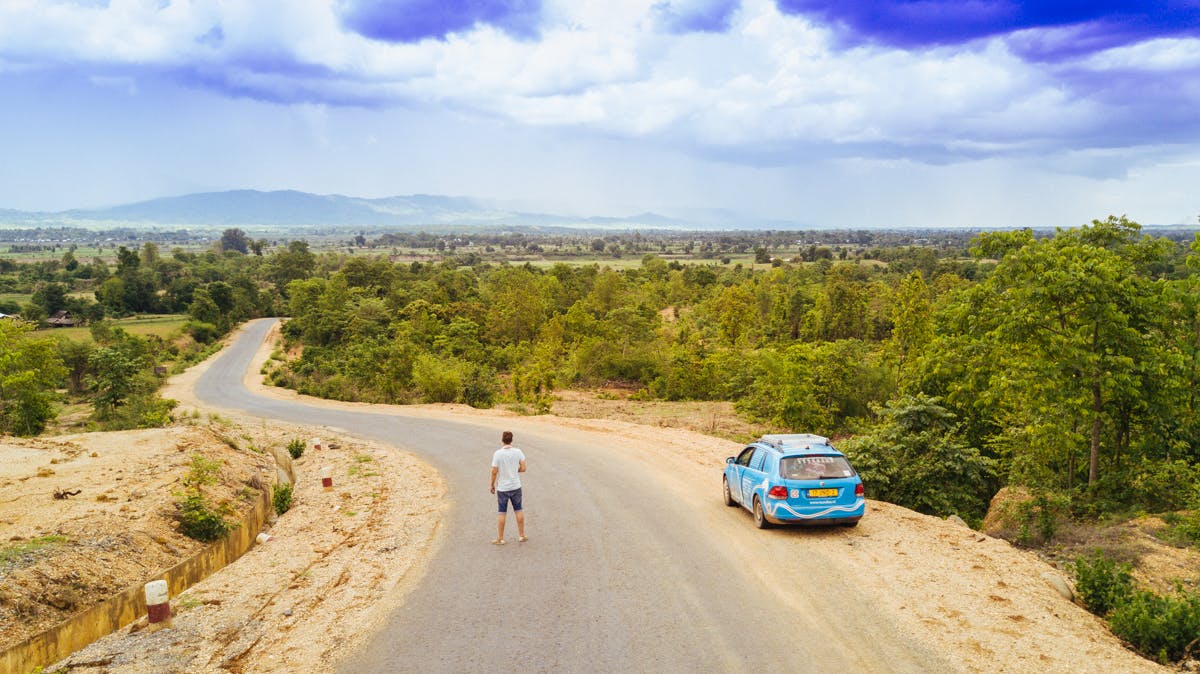 What has been the toughest experience of the trip so far?

I had a lot of mechanical problems in India, which caused a big delay. It started with a broken spring. But as my type of car doesn’t exist in India, the part couldn’t be replaced; it had to be welded.

Then I had a flat tyre, then the bushings on the lower arms went. The car was undrivable, and had to transported to the next city on a truck. But we didn’t have the tools to load the car onto the truck, and it took three days to work out how to do it. 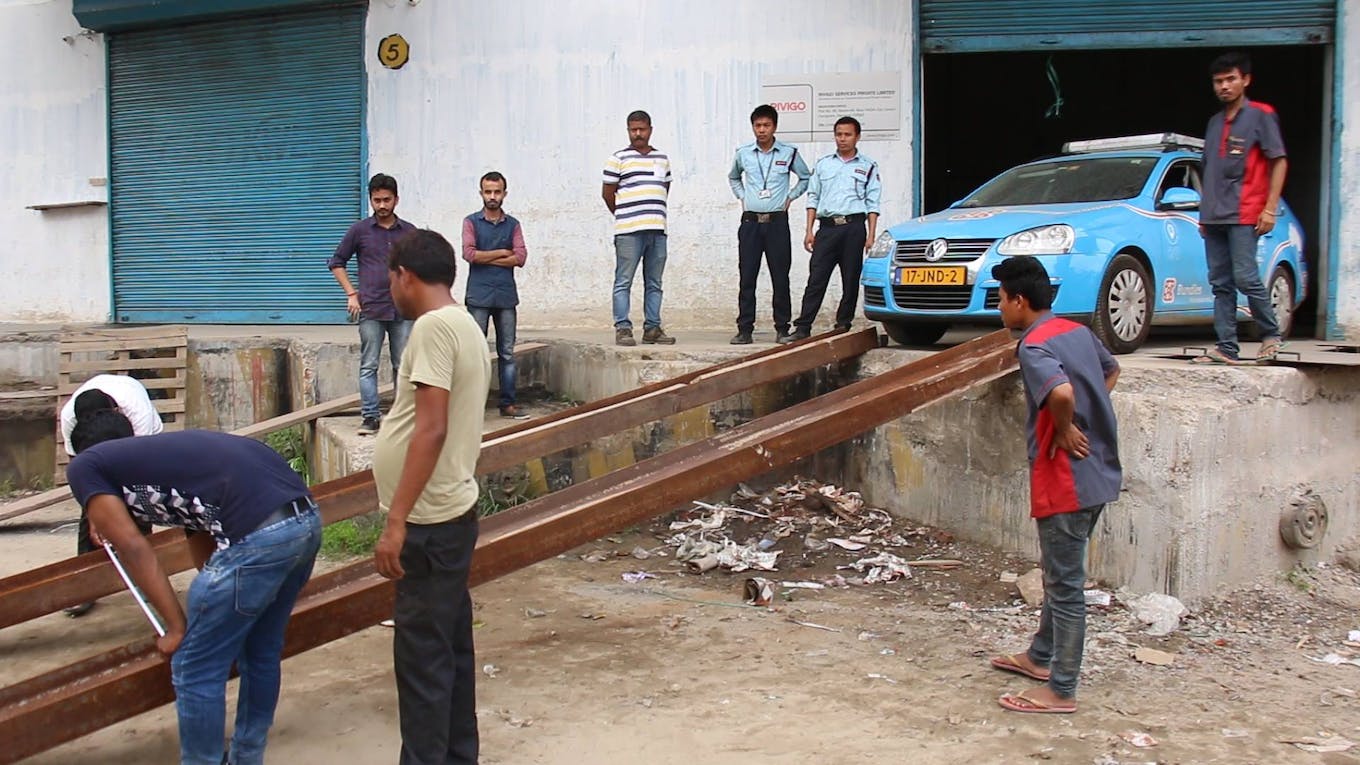 Working out how to unload the car from a warehouse in India. Image: Wiebe Wakker

What’s been the highlight of the tour?

Iran. When I arrived in Tehran, I thought that I’d have problems finding anyone to help me, as I use social media to find donors—and most social media channels are blocked in Iran—only Instagram isn’t.

But I met a man in Tehran who introduced me to some car bloggers. They hadn’t seen an electric car before, so they really wanted to meet me. They made a movie about me and posted it on Instagram. Within a day, more than 100 people had offered me a place to stay. To this day, I haven’t had so many offers. I stayed in Iran for 6 weeks. The only bad thing was answering the same questions 20 times a day, which was mentally challenging. 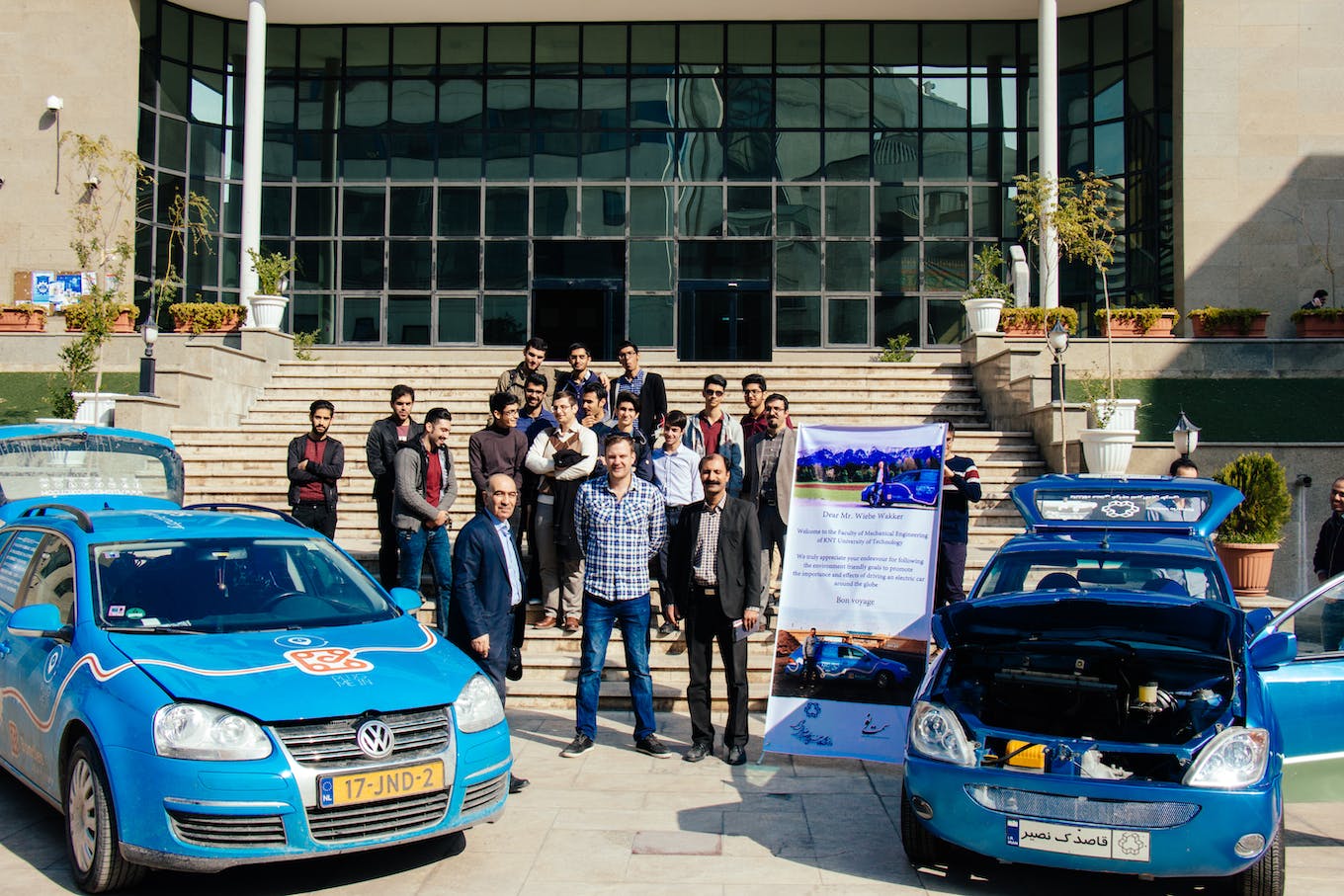 Which country has surprised you the most in its approach to sustainability?

The United Arab Emirates (UAE). While I was there I worked for Electric Vehicle Road Trip, a London-based company that organises road trips in electric vehicles to promote sustainable mobility, to raise money to ship the car from Dubai to Mumbai.

There are 100 charging stations in Dubai, which were installed by the Dubai Electricity & Water Authority (DEWA). There are 60 Telsla owners, and they all imported their cars, either from Germany or Denmark. The government has just introduced incentives for electric cars—they are entitled to free parking, free charging and exemption from toll roads.

The UAE is contradictory in that while the country has made a lot of money from oil, only 7 per cent of Dubai’s GDP comes from oil. It will have run out in 20 years, which is why they’re investing heavily in renewables. Dubai has a large solar park, and last week opened a new park of concentrated solar power and broke a new world record for the lowest price of solar power during the night.

How much longer are you on the road for?

From now, it will take another nine months. It will take 3 months to reach Australia. Once I get there, I have a visa for 6 months. I have a lot of people following me there, so I plan to travel across the country.

Australia is difficult for petrol cars to cross; it will no doubt be challenging for an EV. To help, I’ve been in touch with the Australian Electric Vehicle Association, and they’ve set up some charging stations on that route over the last few months. Some Teslas have already made that journey. But I’ll be the first to drive it in an average range electric car.

There’s one part of the journey—from Adelaide to Alice Springs—that I won’t be able to drive across, as there’s 250km without electricity. I’ll have to get towed. I’m hoping to find someone with a Tesla Model X to tow me, so that the journey is still sustainable and I won’t use any fuel.

Have you worked out the carbon footprint of your journey?

At the beginning, I recorded how many kilowatt hours I was charging to calculate the emissions. But it was too hard to keep it up. In some countries, it didn’t know the sort of energy I was using to charge with—either renewables or fossil fuels—so I gave up.

What’s the most important thing you’ve learned on your travels?

The prejudice about electric cars is wrong—it is actually possible to travel long distances in an electric car. And at least in developed countries, I have come to realise that it’s easier to drive an electric car than a petrol car. Finding a petrol station is not as easy as finding a plug socket.