Are we on track to create a sustainable world by 2050?

Five years ago, Jonathon Porritt imagined a sustainable world by 2050 in his book The World We Made. In this interview, Porritt reviews progress made so far, says Europe has got it wrong on palm oil, and banks are "stupid" for funding coal.

It is five years since Jonathon Porritt, the co-founder and director of Forum for the Future, predicted that the world would be healthy, prosperous and sustainable by 2050—if humanity made the right choices.

In his book The World We Made, Porritt depicted a future where it would be a crime to damage the environment, malaria will have been eradicated, the world would be using 4 million barrels of oil a day, down from the 96 million barrels used daily in 2016, and consumers only eat sustainably sourced fish.

So how hopeful is Porritt now, in the era of the United States’ environment-trampling President Donald Trump, carbon emissions that keep on rising, and plastic in our drinking water?

Porritt sat down with Eco-Business at The SDG Collaborative in Singapore to talk about what’s standing in the way of a more sustainable, equitable world, and the environmental issues that concern him the most.

Are we on the right track to meeting the predictions made in your book?

It’s a mixed picture. Some things have moved in the right direction. The shift to a circular economy has started to bite, and the adoption of electric vehicles has moved from private ownership to mobility-as-a-service in many cities. And the Pope became a champion of the sustainability agenda in 2016—I predicted that wouldn’t happen until 2018.

We are never going to create a sustainable world if the starting premise is that half of the population is going to have to stay poor—that is morally unacceptable. 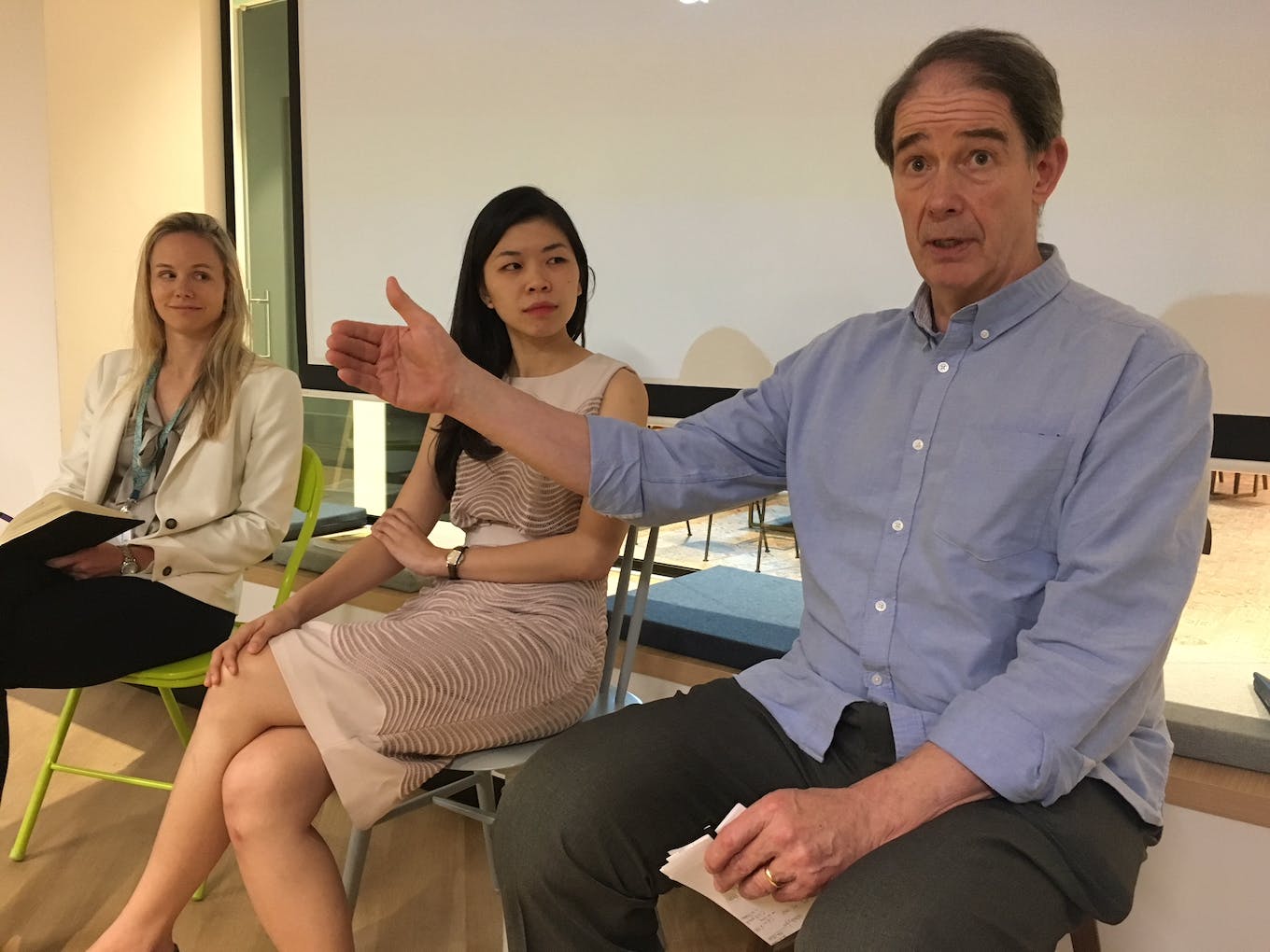 Forum for the Future co-founder and director Jonathon Porritt talking at the SDG Collaborative in Singapore. Image: Eco-Business

What isn’t going according to plan?

What has been happening in the United States is deeply unhelpful. The last cry of the fossil fuel world is being shouted out loud and clear there, not just in terms President Trump’s advocacy for coal, but the resurgence of the oil and gas business. By the end of 2018, the US will be producing 10 million barrels of oil a day. This is as high as it produced in recent history, and could make it the world’s biggest producer.

Also, the shift to sustainable regenerative agriculture is moving slower than I’d hoped. One issue is the concentration of businesses—there are a few big global companies that control a huge amount of the total value chain. These companies are stuck in the old productivist mindset; they look at the number of people on the planet, look at population growth projections, and work out the amount of food they think is required. They are not factoring in issues that affect production, such as greenhouse gas emissions, water availability, biodiversity impact, and soil degradation.

And they’re not thinking about nutrition. There are billions of people living on bad diets; rich in fat, salt and sugar that come from US-led industrialised processed food. It’s now a global phenomenon that can be seen in the rise of diabetes.

What’s the one environmental issue that worries you the most?

Excessive meat consumption. It’s only in the last four years that the full impact of eating too much meat has been well understood. The amount of land used to produce the feed needed to rear animals that are then slaughtered and fed to human beings is staggering. And the contribution that intensive livestock rearing and dairy is making to climate change is unbelievable—bigger than energy production.

You are an advisor to Malaysian palm oil giant Sime Darby. How do you move the sustainability needle in a company like that?

Sime Darby has been working through a sustainability plan for about eight years. They were one of the first companies to appoint a chief sustainability officer, and you can now see huge changes in how they do business. They have made a NDPE [no deforestation, no peat, no exploitation] pledge, and a Responsible Agriculture Charter which—when you’re a company with a land bank in Malaysia and Indonesia as big as Sime Darby’s—is a massive challenge. It also has a human rights charter, which is the best I have seen from an agribusiness firm.

NGOs should not be wasting their time on huge campaigns that demonise palm oil. They should be focused on increasing the volume of certified sustainable palm oil coming into Western markets.

What they want to see is a better understanding in Western markets of the value in companies committing to sustainability. At the moment, a growing number of companies in Europe are claiming their products are better because they are palm oil free. This is scientifically illiterate. These products, which contain an equivalent amount of edible oil, are not higher quality, healthier or less environmentally damaging.

What is happening in Europe [for instance, the proposed ban on palm oil for biodiesel] is detrimental to efforts to persuade more of the industry to take on sustainability commitments. Palm oil companies in Malaysia and Indonesia ask themselves, what the point is of going to this extra effort and taking on the extra cost [to cultivate sustainable palm oil]?

Compared with the soybean industry, which is by and large unregulated and still causing massive environmental damage in South America, palm oil is an industry that has listened to its critics and incorporated concerns about deforestation and damaged peatlands into better business practices.

It is a tragedy that only 19 per cent of globally traded palm oil is sustainable. NGOs should not be wasting their time on huge campaigns that demonise palm oil. They should be focused on increasing the volume of certified sustainable palm oil coming into Western markets.

Does it take a catastrophic event, like the effect the haze of 2015 had on agribusiness in Indonesia, to shift an industry?

Unfortunately, history tells us that it does. Take the automotive industry. Not long ago, diesel was considered the darling fuel for the internal combustion engine because it had better environmental credentials than petrol. But in the last three years, it has become clear that diesel is a big air polluter and contributor to emissions, a story that was compounded by the disgraceful behaviour of Volkswagen. Now, diesel faces an existential threat.

Sales of diesel cars in the UK dropped by 17 per cent in a year, and cities such as Paris, Mexico City, Madrid and Athens have announced that diesel cars will be phased out to curb air pollution in city centres. If you’re in the market for a car now, you probably wouldn’t buy a diesel.

The car industry has now accepted the inevitable transition from the internal combustion engine to electric, but all of the information they are using on research and development on greenhouse gases and air quality was available 15-20 years ago, but it wasn’t sufficient to change the industry.

The latest industry to be hit with an existential wake up call is plastic. What’s your take on the issue?

We have known for a very long time that there would be damaging consequences from the huge increase in the manufacture of plastics. But we didn’t have the research that has emerged in the last five years showing the impact of microbeads and microplastic to give policymakers compelling evidence against plastic.

When people ask me, what is the one thing I can do to make a difference to the environment, I say stop eating beef.

So now, every company involved in plastic packaging is having a panic attack. They are thinking to themselves, how do we come up with a formula for using less plastic, or substitutes for plastic? I think these challenges are going to unleash incredible innovation in the industry.

While coal is in decline globally, the opposite is true in Asia. How do you respond to people in Indonesia or Vietnam who say coal is needed to provide reliable energy for their people, and should not be judged for going down the fossil fuels route as they industrialise?

It is a strong argument. We are never going to create a sustainable world if the starting premise is that half of the population is going to have to stay poor—that is morally unacceptable. We cannot deny any country the right to provide energy access as a basic condition for improving living standards for their people.

In Indonesia [one of the world’s biggest coal producers and builders of new coal capability], providing energy to a country separated by thousands of islands is difficult, and coal may look like the only viable option. But once you build a coal plant, you’ve still got to transport it and not all of Indonesia’s islands are coal-rich.

There is a danger that Indonesia and Malaysia, where there is less solar activity that in the UK, are misreading what is happening in the global energy markets. Policies on renewables in Southeast Asia are completely off the pace.

Affordability is no longer the issue. Over the last decade, the average price of solar has dropped by 7 per cent every year and cost reductions will continue significantly over the next decade. That the World Bank has said it will not fund any new fossil fuel plants after 2019 is an indication of the speed the market is changing.

The coal-fired power stations being built now will become wasted assets. Providers of capital have not done their due diligence. Banks employ some very smart people, but sometimes you have to say they’re the stupidest people on the planet. It disturbs me when countries say they have no option but to invest in past technology when the technology of the future is already with us.

I am not an optimist because I think optimists tend not to look at the world as it really is. But I am full of hope that this is a transition that we can achieve—because we don’t have any choice.

What’s your view in the role of religions in driving the sustainability conversation?

There is a valuable opportunity in a faith-based approach to sustainability. In the religious context, sustainability is about personal responsibility, and a commitment to protecting God’s work—the natural environment. The Quran, for instance, is full of inspirational exhortations to look after nature.

But there are also difficulties with religious teachings, for example the Catholic church’s views on family planning. I visited a refuge for women who have had illegal abortions in the Philippines. It was shocking to see the impact that the Catholic church’s opposition to contraception and abortion has had on tens of thousands of women, who visit backstreet clinics for operations.

How hopeful or optimistic are you for the future?

I am not an optimist because I think optimists tend not to look at the world as it really is. But I am full of hope that this is a transition that we can achieve—because we don’t have any choice.

What is going to save us comes down to application and innovation. We have got a lot of the technology we need already, but we need to apply it faster and better.