Record Arctic melt is not merely an academic issue. As any climate scientist will tell you, what happens in the Arctic, ultimately, doesn’t stay in the Arctic.

On Monday, June 10, following a tumultuous May that saw massive floods and tornadoes rip through the US Midwest, heatwaves in the Southeast, and snow in the Rockies, 2019 claimed another climate crisis victim — sea ice.

Every year, Arctic sea ice hits its lowest extent in September. Spring and summer, therefore, are known as the melt season, following a winter of ice growth. Ultimately, annual variation in the loss of sea ice is determined by weather patterns, which makes it impossible to accurately predict which years will experience record-lows under a warming climate and which years will fare better.

But for ice-watchers, 2019 is showing some serious signs we could be in for a bad summer and maybe a new record for low extent. For starters, the conditions in the Arctic right now ominously mirror the spring conditions of 2007. That year is infamous among polar scientists for setting the lowest September sea ice extent at the time, though it was later bumped to second place by 2012, then tied with 2016.

Both 2007 and 2019 have been dominated by lingering high pressure systems, bringing intensifying sunlight and heat. The Arctic has experienced record-breaking temperatures this spring, particularly around Alaska where ice cover had all but disappeared in the Bering Sea by March. This high pressure system over the North American Arctic, coupled with the low pressure system over northeastern Eurasia is known by scientists as the“Arctic Dipole Anomaly.” 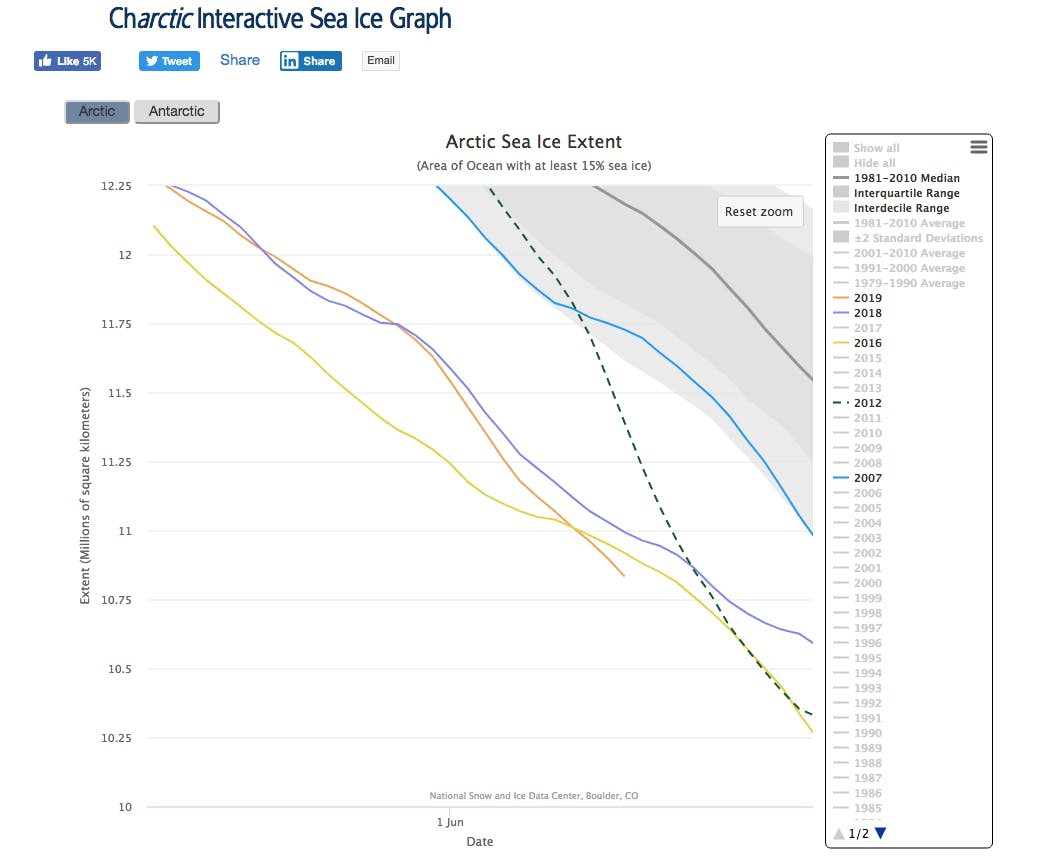 Arctic sea ice extent set a new record low for this time of year on June 10 and June 11, 2019. Trend lines for 2012, 2016 and 2007, which currently hold the three lowest September extent records, are shown in comparison. Image: National Snow and Ice Data Center (NSIDC).

“What happens is this pattern sets up and pumps a lot of warm air into the Arctic on the Eurasian side,” says Mark Serreze, director of the National Snow and Ice Data Center. “This creates a pressure pattern that favors a big flux of ice out of Fram Strait.” The Fram Strait, which runs between Greenland and Svalbard and the Jan Mayen archipelago to the east, is the key zone where drifting ice exits the Arctic, and more ice moving through its waters is bad news for the region writ large.

“This pattern is reminiscent of what we saw in 2007, which means it certainly bears some watching,” says Serreze. Disturbingly, there is far less Arctic sea ice volume in 2019 than there was in 2007; sea ice volume this May was the second lowest for this time of the year on record.

In 2007, the Arctic Dipole Anomaly lasted throughout spring and summer. But scientists can’t yet predict whether that will be the case this year. As Serreze notes, the last few summers have also been “cyclonic” over the Arctic Ocean. Come July or August, a cooler pattern has kicked in with low pressure systems, protecting the remaining sea ice from the punishing rays of continuous summer sunshine.

That effect is essentially the “antithesis” of the dipole anomaly, explains Serreze, and could very well be what saved us from setting a new record low extent the last two Septembers, especially given how fragile things looked at this time of year in 2018.

Record Arctic melt is not merely an academic issue. As any climate scientist will tell you, what happens in the Arctic, ultimately, doesn’t stay in the Arctic. 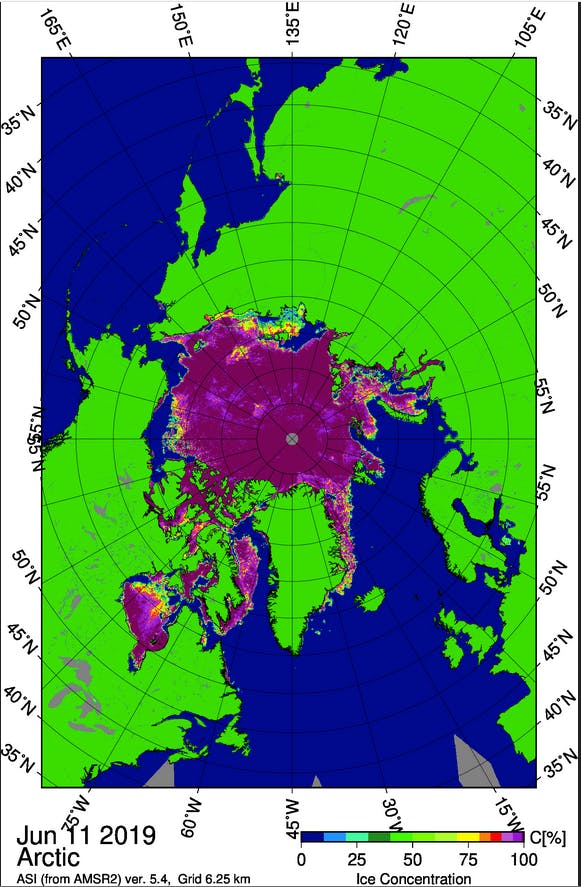 What is unusual about 2019 is the extremely early extent loss in the Bering, Chukchi, and Beaufort Seas along the Alaskan coast, as well as rapid ice exit out of the Arctic through the Fram Strait east of Greenland. Image: Universitat Bremen.

Researchers are increasingly certain that the temperature difference between the Arctic and the temperate zone farther south is one of the primary factors that creates and propels the jet stream — a fast-moving river of air in the Northern Hemisphere .

But as sea ice vanishes and Arctic temperatures increase, the temperature variant between these regions is getting smaller. That means there’s less force driving the winds in the jet stream from west to east, and the weakened jet stream starts to swing wildly, deviating from its typical polar path into lower latitudes which cause temperate weather patterns to stall in place — bringing punishing bouts of extreme weather.

“If you look at it right now, it’s one of the waviest jet streams I’ve ever seen,” says Jennifer Francis, a senior scientist at the Woods Hole Research Center in Massachusetts, USA, and one of the first researchers to connect the Arctic meltdown with temperate zone extreme weather.

Each of those jet stream waves creates atmospheric dynamics, such as low and high pressure systems. This is concerning because a slow-moving jet stream can essentially stall out, with a wave holding its position, causing weather systems to get stuck in one place.

“Alaska had one of the warmest winters and springs on record because this big high pressure ridge has been pumping heat up from the south,” Francis says. That ridge is strongly associated with the big ice loss in the Bering Sea this year, which only serves to strengthen it. Meanwhile, California and the Rockies had a very cold, snowy winter and spring because of that same contorted jet stream configuration.

The tornadoes in the Midwest this May also could have had their origins in the warming Arctic. Jet stream winds in May shot directly across the midsection of the United States, bringing great amounts of energy from the Pacific Ocean into the Midwest. Here, the cooler winds from the West and North clash with warmer air from the Southeast, breeding severe weather that can lead to twisters. Bomb cyclones, severe thunderstorms, heavy rain and catastrophic flooding in the Mississippi River basin have all possibly been born out of this year’s deeply askew jet stream, according to Francis. “All these extreme events are connected.”

A new study earlier this month found that summer heatwaves in the southern United States were far more common in years when Canada’s Hudson Bay experienced reduced sea ice in the spring. Compared to other marginal seas in the Arctic, Hudson Bay “carries the greatest relationship between its sea ice levels in spring and summer and incidence of heatwaves across the United States” due to a strong spring warming over the Labrador region, says Dagmar Budikova, a climatologist at Illinois State University and study lead author.

This year, sea ice in Hudson Bay is doing okay. However, it’s not the only driver of weather extremes in the mid-latitudes.

It’s impossible to downplay just how important sea ice is for maintaining a stable temperate climate. “As of the last few years, we’re looking at [summer sea] ice cover half as big as it was only 40 years ago,” explains Francis. “It’s a huge, huge change in a very short time. In terms of volume of ice, we’ve seen roughly a 75 percent loss. It’s just staggering.”

Whether or not this year ultimately clinches a new annual record for lowest minimum extent in September, focusing only on that statistic is perhaps losing the forest for the trees. Even if 2019 shifts from dipole to cyclonic, with the ice melt pulling out of its precipitous dive, the overarching narrative for the Arctic is still one of spiraling loss.