A Singapore-based renewables startup is on a mission to replace polluting diesel-powered boats with solar-charged electric vessels in Southeast Asia, inspired by a Swedish furniture retailer's disruptive approach to part distribution and assembly.

All around Southeast Asia, experiments in the electrification of transport are underway. Buses in Thailand, cars in Malaysia, scooters in Myanmar, bicycles in Singapore, and jeepneys in the Philippines. But, as sea levels rise around the climate-vulnerable sub-region, what about transport of the seafaring variety?

The aim? To build a sustainable business ecosystem around e-boats, and in so doing reduce the region’s reliance on fossil fuels, curb pollution, and improve the health and livelihoods of local communities in one of the regions at greatest risk from climate change.

Van Mameren and his team were inspired by the Ikea model of homeware distribution and assembly when they came up the plan. His company will supply the parts for the boats and instructions for how to assemble the kit, but ultimately, the vessels will be put together by local boat builders who can sell off the completed boats and turn a profit. 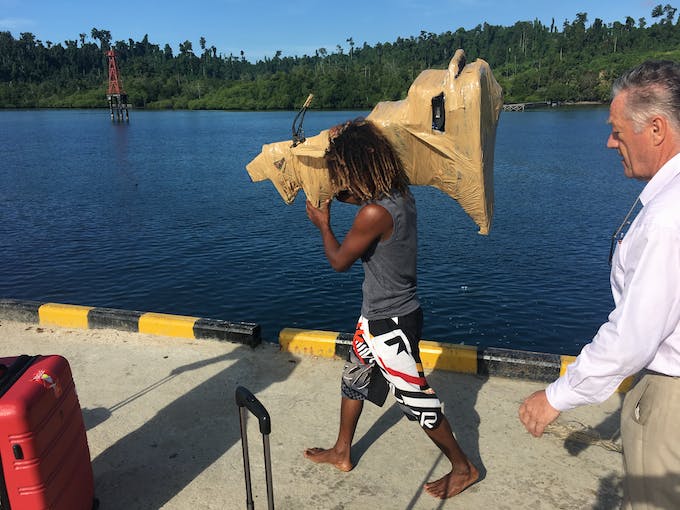 Van Mameren (right) accompanies Frederik Sarwa, a Biak tribesman from Raja Ampat, who is carrying an outboard motor that is to be converted into an electric engine in Singapore. Image: Eco-Business

“The whole world is in hot pursuit of electric cars, buses and scooters. But they forgot about boats. There are literally millions of boats in Southeast Asia. If you let this market get away, you’re making a big mistake,” said Van Mameren, who spent 50 years in the shipping business before launching his clean energy venture in 2017.

A lot of boats

Heavy, diesel-powered wooden boats are the primary form of transport for navigating the waterways of developing Southeast Asia. Referred to as rua hang yao in Thailand, thuyền gỗ in Vietnam, bangkas in the Philippines and jukungs in Indonesia, these vessels are typically made of timber from fully-grown trees and crafted by local boat builders. Motor engines, fuelled by diesel, are then fitted so that the boats can traverse long distances.

Southeast Asia simply could not function without this life-supporting mode of transport. The Philippines is made up of 7,641 islands, while 13,466 islands make up the Indonesian archipelago. One of the most important rivers in the world, the Mekong, is home to 60 million people spread across Myanmar, Vietnam, Laos, Cambodia and Thailand who live along its tributaries and depend on the river for food, water and jobs. 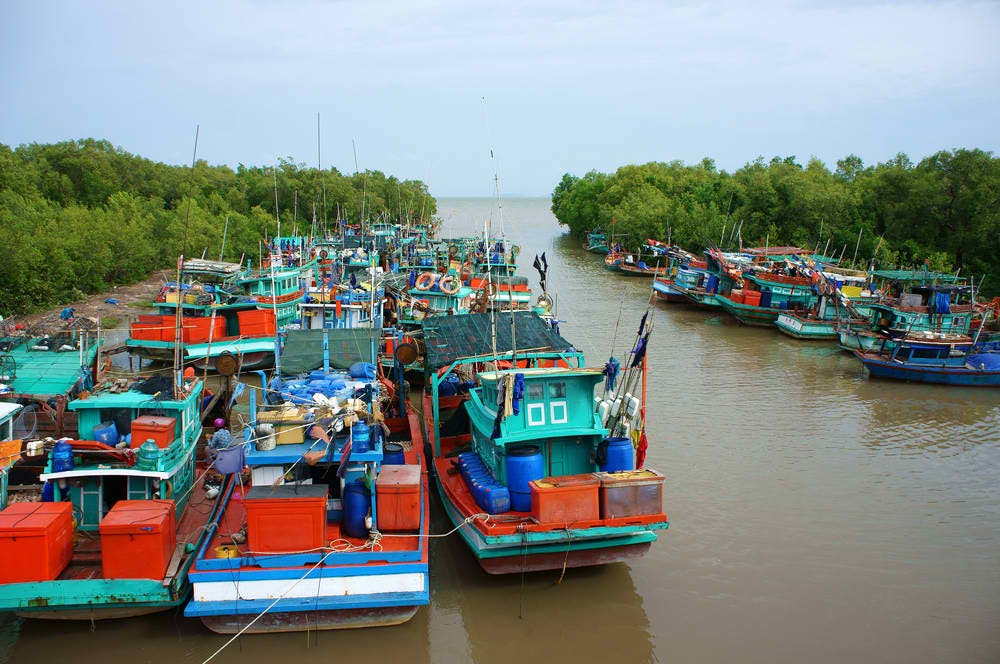 Many of the region’s boat users are fishermen; one fifth of the world’s fish catch comes from Southeast Asia, and Indonesia, Thailand, Vietnam and the Philippines make the list for the world’s top 10 fish producers.

Another big part of the region’s boat fleet is devoted to tourism; popular travel destinations such as Krabi, Phuket, Boracay and Bali use smaller vessels for island-hopping tours. 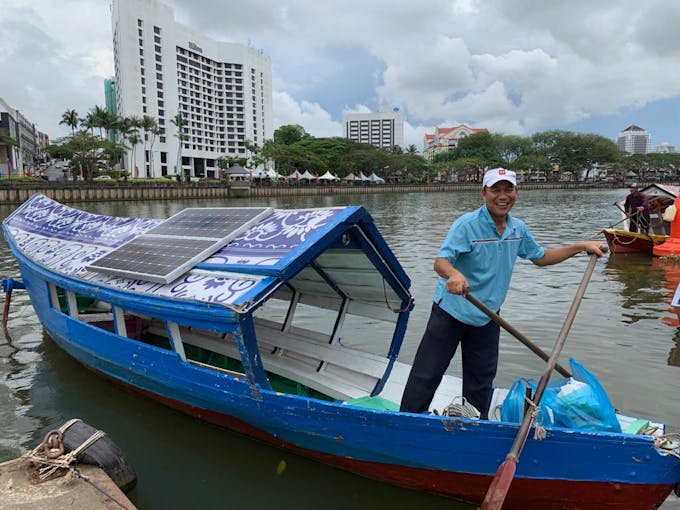 What won’t work. With only two solar panels on its roof, the solar capacity of this heavy wooden boat in Indonesia could only power the lighting, says Van Mameren.

Increasing boat numbers have sparked concerns over fuel leaks and noise pollution, which harm marine life and affect fisheries and the quality of tourist sites. Responding to this need, renewable energy solutions such as solar-powered boats have been making waves in Southeast Asia.

Besides creating the boat assembly kit, Van Mameren’s bigger ambition is to work with solar technology specialists to install solar panels in villages where his electric boats operate. These panels will supply clean energy to charge the boats and also provide electricity for daily consumption—an important bonus for those living off-grid.

Describing local boat builders as “craftsmen”, Van Mameren is confident that locals who use wooden boats can easily translate their traditional boat building skills into the modern composite boat building that is needed for electric boats. His assembly kits will come with an instruction manual in the local language, and he also intends to organise training sessions to familiarise local boat builders with the assembly procedure.

Van Mameren also thinks that his idea, while expensive at the outset, will generate savings over the long term.

According to his calculations, Indonesian fishermen in the divers’ paradise of Raja Ampat, West Papua, spend about half of their incomes on fuel. So, instead of selling the assembly kit at prices that are beyond the incomes of local boat folk, he intends to work with local dealers to lease his electric boat assembly kits at prices lower than what they would spend on fuel.

Perhaps the biggest appeal of Van Mameren’s solution is its capacity to double as a rural electrification scheme. If he can secure partners to install solar panels on his customers’ homes, he thinks that locals are very likely to embrace his renewable energy solution.

Currently, Energy Renewed’s team of engineers in Singapore is working on a prototype for their electric boat assembly kit, and they plan to go to market by the end of 2020. Two prototypes have been designed, one for a catamaran and another for a longboat. 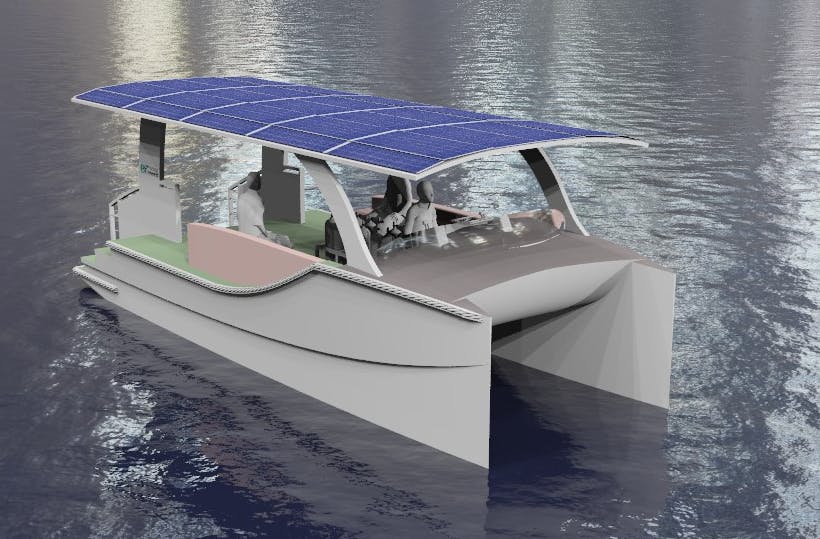 How fast and how far the project will go depends whether Energy Renewed can secure the necessary funding, get the right partners on board and win support from policymakers.

“If they [policymakers] can drive the initial wave of change from traditional boats to electric boats, then we have a greater chance of success,” said Van Mameren. “If they are still subsidising and promoting fossil fuels, then it’s harder for us. If governments plan for all cars to be electric in five to ten years’ time, then we can simply say, do boats too.”

The end-of-life sustainability of the electric boats, which will be made from lightweight but non-biodegradable fibreglass, will also depend on local industrial waste management policies. Van Mameren recalls seeing old wooden boats laying abandoned in creeks and ports in West Papua.

As he looks for partners and funding for his renewable energy solution, Van Mameren is optimistic about the scalability and replicability of his idea.

“The principle and concept works everywhere, you just have to adjust it slightly to the local situation. After all, a boat is a boat,” he said.