An 'elite minority' is responsible for most aviation pollution, and should be penalised for it, says NGO

A small minority of frequent flyers dominate air travel in almost all countries with high aviation emissions, according to a new report.

An “elite minority” of frequent flyers cause most of the climate damage resulting from aviation’s emissions, according to Possible, a climate charity based in the United Kingdom.

The report, which collated data from the top 26 countries that produce the highest aviation emissions, shows that most air travel, even within the richest of nations, is “down to a small, relatively well-off demographic taking ever more frequent leisure flights.”

Aviation accounts for 2.4 per cent of the global carbon dioxide emissions, according to the International Council on Clean Transport. Iceland, Qatar, United Arab Emirates and Singapore were the top four emitters of carbon dioxide per person from international aviation in 2018, according to Our World In Data which compared emissions from international flights according to country of departure. Lower-income countries per capita are only a few kilograms – six kgs in India compared to 3.5 tonnes per person in Iceland. 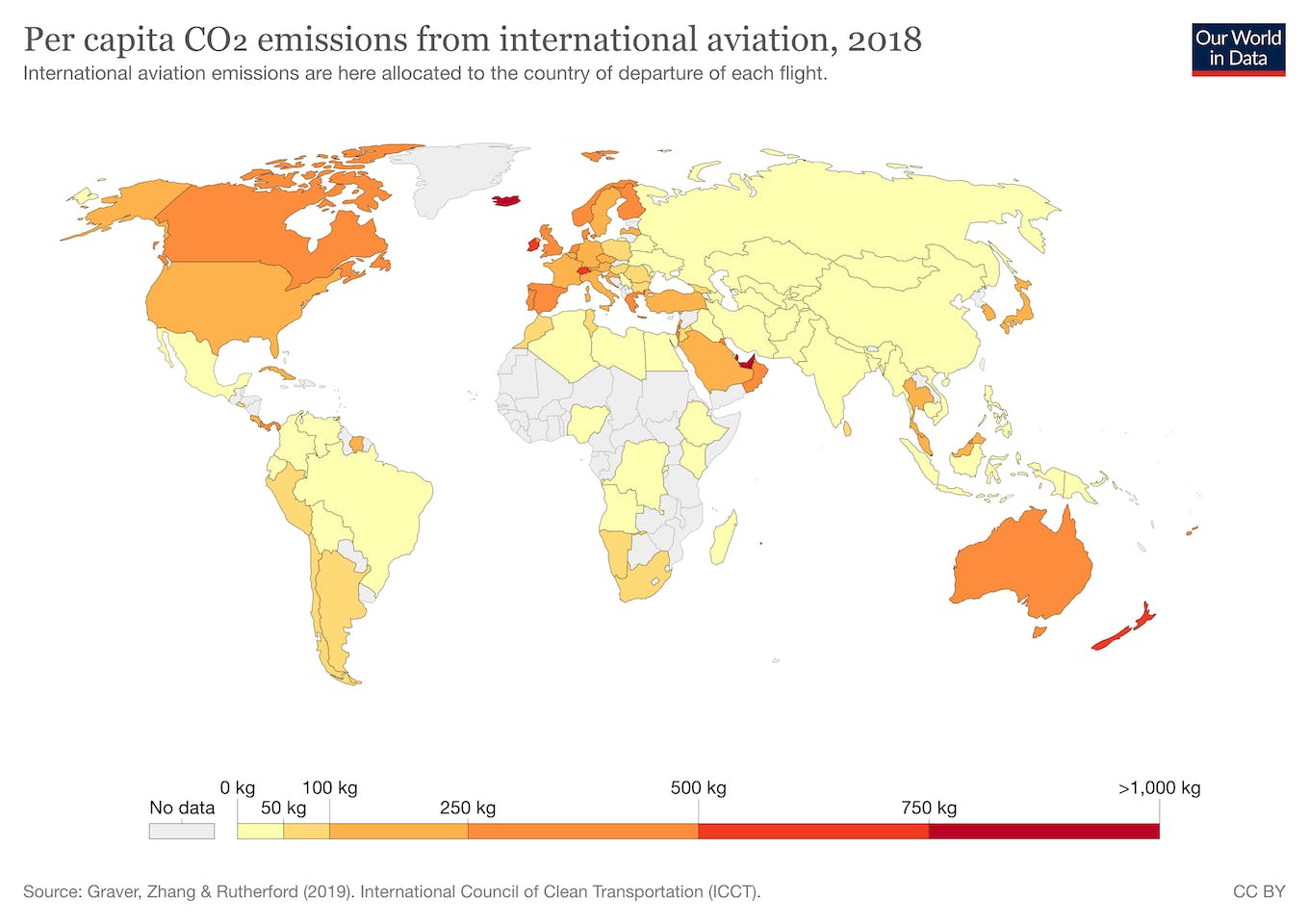 Per capita CO2 emissions from international aviation, 2018, Our World in Data.

The climate charity recommends in its report imposing a frequent flyer levy which makes it incrementally more expensive for the “elite minority responsible for most of the environmental damage from flights” each time they fly.

Campaigners say that this approach tackles the climate crisis fairly, ensuring people with greater responsibility for emissions make bigger changes. Other environmental groups, including Greenpeace, also support the idea of a levy.

“While the poorest communities are already suffering the impacts of a warming climate, the benefits of high-carbon lifestyles are enjoyed only by the few,” said Alethea Warrington, campaigner at Possible. “A progressive tax on aviation would treat frequent flying as the luxury habit it is. A lot of people travel. But only the privileged few fly often.” 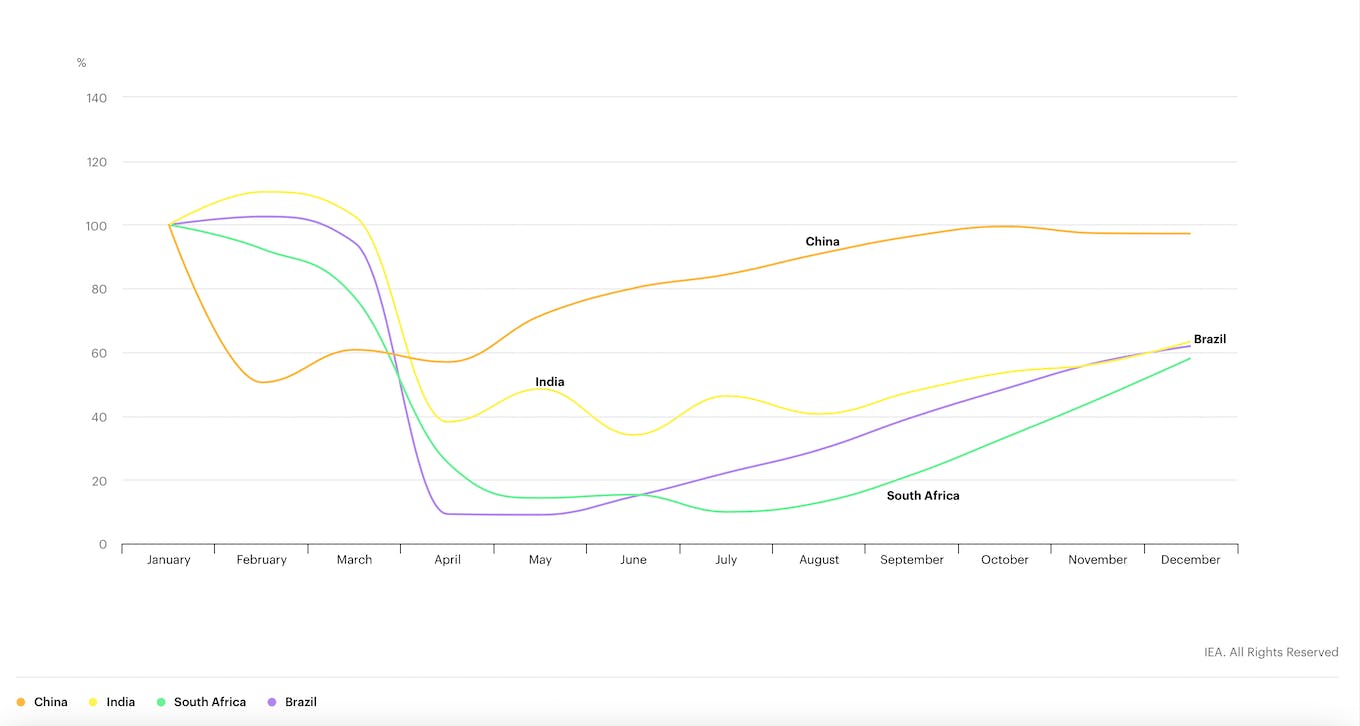 IATA said in March that global airlines must adopt tougher rules on carbon emissions once flying restarts after the Covid-19 virus. Airlines are investing billions into cleaner aircraft, sustainable aviation fuels and the use of carbon emissions trading and offsetting as part of long-term strategies to cut 2005-level emissions in half by 2050 and pursue carbon neutral growth after 2020. Some European airlines have set targets to reach net zero by 2050. Carriers in developing nations are likely to lag in making similar commitments.

While a rebound is expected as vaccine programmes are rolled-out, airlines are unlikely to endorse a scheme that is inverse to frequent flyer miles that reward passenger travel. It is not guaranteed that a levy would be enough of a deterrent. Business travellers could arguably expense the cost while frequent flyers may well fork out the extra cash regardless.

Critics of the levy charge that it would be difficult to administer and would require buy-in from airlines and governments around the world. While an overarching international body to police the policy may strike some as too imposing on people’s right to travel, complications also arise where passengers hold multiple passports.

“Ideally, it [frequent flyer levy] would not be brought in, in isolation,” Warrington told Eco-Business. “It is likely to need to be combined with a tax on kerosene, carbon emissions tax as well.”

A cornerstone of the industry’s strategy to tackle climate change is the Carbon Offsetting and Reduction Scheme for International Aviation, CORSIA, which will require airlines to buy credits to offset their emissions.

Carbon offsetting has also gained favour with passengers looking for easy ways to neutralise their carbon emissions. Offset schemes offer passengers a chance to pay a fee towards projects that will mitigate the ecological effect of their journey.

“Offsetting is a get out of jail free card which doesn’t actually work,” Warrington told Eco-Business. “There is no magic wand that you can wave to get rid of emissions once they have been put into the atmosphere. Some of the offsetting schemes that airlines are proposing are not even attempting to store emissions.”

A study by the European Commission found that 85 per cent of the offset projects used by the EU under the United Nation’s Clean Development Mechanism failed to reduce emissions.

Modelling by the International Energy Agency has shown that in the long-run, the airline sector needs to reduce its own emissions, rather than offset them. Alternative fuels, such as hydrogen, offer a hopeful solution long-term but are still being developed.

“As an engineer working on future aircraft technology, I quickly realised that technology development is moving too slowly compared with growth in air traffic,” said Finlay Asher, a former airline engineer and founder of Green Sky Thinking which focusses on sustainable aviation. “The only way to reduce emissions from the sector in time is government policy to fairly limit demand for flights. Without that, no amount of technology will help.”