Agribusiness must reduce environmental impact. What role can banks and NGOs play?

Industrial farming has contributed to water pollution and loss of wildlife habitats. A promising project has helped improve salmon farming standards in Chile. How did 'fundamentally different' organisations make it work?

But the farming boom over the last three decades has damaged the marine environment and affected communities near salmon farms in the slender South American country.

Knowing that production had to become more sustainable, Rabobank, the largest financier of Chilean salmon farming, set out seven years ago to improve standards.

For conservation expertise, the bank turned to the World Wide Fund for Nature (WWF), with which it started a partnership in 2011. Together with its clients, the bank and WWF set out to achieve a more sustainable food supply across different countries.

In Chile, they formed an alliance with several salmon producers to show that growth and profits could go hand in hand with protection of ecosystems and cooperation with local communities.

Potential for partnerships to reinvent aquaculture in Southeast Asia

Could such a partnership involving a bank, NGO and seafood companies be feasible in Southeast Asia, where aquaculture has left a big environmental footprint but where demand for seafood is soaring?

In Southeast Asia, natural habitats including mangrove forests have been converted to aquaculture ponds. There is a need to freeze habitat conversion and use natural resources—land, water, energy and wild fish used in feed—more efficiently, said Dr Aaron McNevin, WWF’s global network lead for aquaculture.

Unlike Chile, where farms and processing plants are owned by the same companies, the hundreds of thousands of farmers and countless middlemen and brokers in Southeast Asia make traceability very difficult, he noted.

“Without traceability, there is no accountability for how a product was produced—it is a black box,” he said.

A partnership in this region could look at ways to transform marginal and polluting farms into more efficient ones with closed production systems, he said.

Banks could perhaps spearhead pilot projects for shrimp, a key export, and demonstrate the business case for better and more sustainable technologies.

Their goal was to get producers to sign up for Aquaculture Stewardship Council (ASC) certification, which sets standards in areas such as the use of antibiotics, feed practices, maintenance of water quality, prevention of fish escapes and where farms can be sited.

By 2017, the proportion of ASC-certified Chilean salmon reached 13 per cent. Today, 36 per cent of the country’s US$5 billion industry—the world’s second-largest, after Norway—is ASC-certified and the figure is set to rise.

Partnerships with NGOs and clients take time and resources, but are important for Rabobank, which is food and agriculture-focused and wants to make supply chains more sustainable, said Aukje Berden-Praamstra, its Netherlands-based senior strategist in sustainability, who is the bank’s programme manager of the partnership with WWF.

Agriculture is a major source of carbon emissions, and industrial farming to feed a growing population has led to devastating impacts ranging from the loss of forests and wildlife habitats, to soil degradation and water pollution.

Through the ongoing partnership, Rabobank and WWF want to show that economic returns, conservation and restoration of biodiversity and ecosystems can go together.

Besides Chile, they have also embarked on projects in Brazil, Argentina, India and the Netherlands.

In Holland, they developed a biodiversity monitor with dairy company FrieslandCampina that enables farmers to monitor their impact on biodiversity using a standardised system. The monitor also proposes measures farmers can take to improve biodiversity, and key performance indicators form the basis for revenue models and rewards.

In India, they worked with one of the country’s largest sugar producers to use water more efficiently, preserve the ecology of the plantations and maintain biodiversity by curbing encroachment on the habitat of tigers, for instance.

Together with farmers in Brazil, Rabobank and WWF conducted studies on the potential of environmentally sound systems that integrate livestock farming, crop cultivation and forestry.

And in Argentina, they are currently working with a major farmers’ association (AACREA, or Asociación Argentina de Consorcios Regionales de Experimentación Agrícola) on a sustainable farming manual.

In Chile, the push for ASC certification has sought to address a gamut of impacts from salmon farming.

Uneaten feed and excretion of the farmed fish cause the waters of Chile’s Patagonian fjords and channels to become overly rich in minerals and nutrients, and this has been linked to harmful algal blooms that have killed tens of millions of the farmed fish and affected other marine life.

Pesticides used to control sea lice infestation may harm other marine species, and excessive use of antibiotics has led to drug-resistant bacteria in sediments and raised fears over the possible impact on human health.

Meanwhile, farm infrastructure and shipping traffic increase noise pollution and the risk of collisions with marine mammals such as blue and humpback whales. 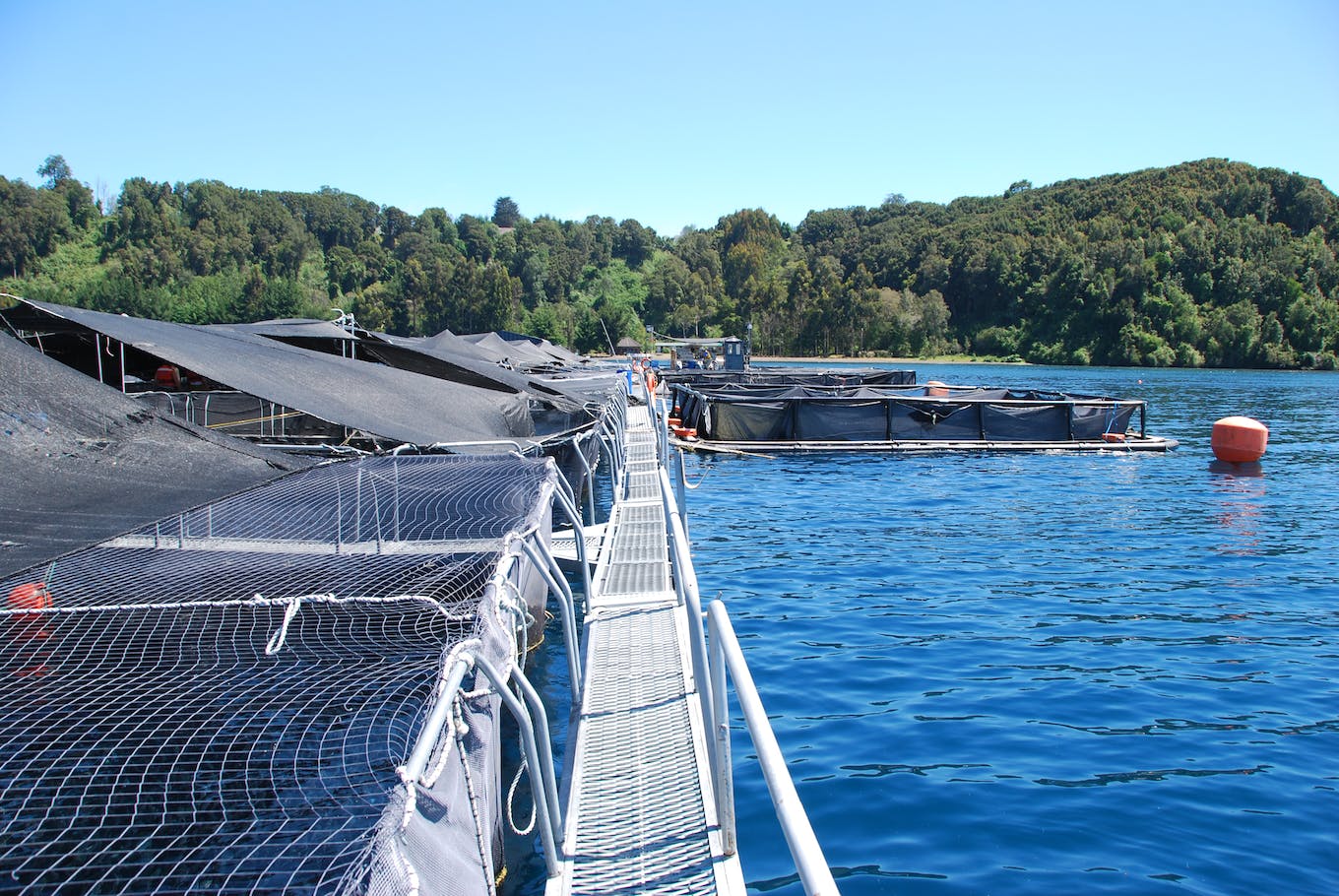 More farms in Chile are in the process of getting ASC certification. Image: WWF Chile

More ASC-labelled salmon is in the pipeline, with 61 farms in the process of certification, said Brenda de Swart, Rabobank Chile’s head of sustainability. “The problem is that currently there is a lack of available certifiers,” she said.

For the partners, the project has unlocked opportunities.

For WWF Chile, it opened doors to new partners willing to make concrete changes. It helped position the environmental group as a “key player within the green financial sector, placing environmental and social issues recommended by our organisation at the forefront of industry discussions”, said Cristina Torres, WWF Chile’s marine conservation programme coordinator.

The project enabled Rabobank to incorporate sustainability in its strategic conversations with the salmon companies, said de Swart.

This year, it even structured Chile’s first green loan for the country’s largest salmon company, Agrosuper, which is also the world’s second-largest salmon producer.

The seven-year US$100 million loan will fund some of Agrosuper’s acquisitions and comes with environmental and social conditions, such as the reduction of antibiotic use in farming and increase in number of ASC certifications.

The loan’s key performance indicators were defined together with WWF Chile, and Rabobank is in dialogue with other clients to offer similar financing solutions, said de Swart.

There are higher short-term costs for salmon producers, which have indicated that they rarely get a better price for ASC-certified salmon, said de Swart.

“However in the long run, I expect that this will pay back, as by producing in a more sustainable way, taking into consideration biodiversity limitations, the risk of events happening that will negatively impact your business will be lower,” she said.

According to a 2018 review of ASC’s salmon standard by sustainable seafood partnership SeaChoice, an Australian farm producing around 25,000 metric tonnes a year disclosed that its auditing fees for ASC certification was about A$125,000 (US$85,400) per year.

Sustainable salmon farming in Chile remains a work in progress as concerns persist over excessive antibiotic use and other issues.

“The partnership provided a step towards responsible farming and created a performance shift within the industry but there are still many issues to resolve,” said WWF Chile’s Torres.

The entire industry must commit to reducing antibiotics use and invest in research on vaccines and booster feeds to improve the immune system of the fish, for instance. And given the current national context—the country is seeing mass protests over inequality by citizens, triggered by an increase in subway fares—the NGO said social issues are as relevant as ever and concrete steps must be taken to ensure all the voices from stakeholders are heard.

Other changes WWF Chile would like to see are farms moving completely out of the country’s lakes, an ecosystem approach to aquaculture, and a new zoning process to select the best places for aquaculture based on robust science, to name a few, said Torres.

There will always be room for improvement but distinct changes for the better have been made since 2012, said de Swart.

Researchers at Erasmus University’s Rotterdam School of Management have studied the Rabobank-WWF partnership and found that it accelerated progress on more sustainable supply chains across the different countries, said Berden-Praamstra.

Building trust among “fundamentally different” organisations was one of the most important elements.

“We really want to transition to a more sustainable food and agricultural sector in cooperation with our clients… and WWF has unique knowledge and expertise in nature conservation to support us in this shared ambition,” said Berden-Praamstra.

An unusual loan that made the sustainable finance world take notice

With the world running out of arable land and water to feed a growing population, agri-tech start-ups could play a major role in cutting food loss and improving farming practices.
How apps, AI and solar-powered cold rooms are driving sustainable agriculture