Student device aims to rid ocean of plastic in 5 years

Boyan Slat of Delft University of Technology conceptualised the Ocean Cleanup Array, an anchored network of floating booms and platforms, which he hopes will eradicate the world’s plastic waste, saving marine life and ecosystem services

Boyan Slat, a 19-year-old aerospace engineering student from the Netherlands, has created a potential solution to clear away the world’s plastic waste from the ocean in about five years.

The project is called the Ocean Cleanup Array, an anchored network of floating booms and processing platforms that will harness the five major gyres in the world.

Gyres are a mix of naturally occurring currents and wind that produce a vortex in the water, trapping most floating plastic that it is usually referred to as the globe’s garbage patches. Two are in the Atlantic, one in the Indian Ocean and two in the Pacific.

The Cleanup Array is projected to clean one-third of the total ocean surface plastic pollution or about 7,250,000,000 kilogrammes, said Slat, who established The Ocean Cleanup Foundation earlier in January this year.

The project, conceptualised in 2012, is currently undergoing a feasibility study with a team of about 50 engineers, experts, modellers and fellow students. They are refining the trash or pollution numbers with plastic accumulation models, as well as assessing other variables such as the size of the array in relation to the radius of the gyres, among other data.

While the preliminary results show promise, this is still not a concrete and implementable project, Slat emphasised.

In a 2012 TED talk at the Delft University of Technology, he said the Ocean Cleanup Array was inspired from a diving trip he made in Greece, where he saw more plastic waste than marine creatures. As a result, he combined his interest in technology and the environment with a budding eco-activism to advocate for cleaner oceans.

“Plastic pollution costs governments, companies and individuals millions of dollars in damages per year, due to loss in tourism, vessel damages and (inefficient) beach clean-ups,” he wrote in his website.

This non-biodegradable plastic also ends up being eaten and causes the death of numerous aquatic animals, which likewise affects the food chain that humans are a part of. Plastic in the ocean spreads harmful algae and may carry invasive species and pollutants like PCB and DDT, Slat added.

Greenpeace International, one of many non-government organisations that campaigns for marine conservation and zero pollution, likewise described a trash vortex in the North Pacific that is the size of Texas in the United States, “in which an estimated six kilos of plastic for every kilo of natural plankton, along with other slow degrading garbage, swirls slowly around like a clock, choked with dead fish, marine mammals, and birds who get snared.” 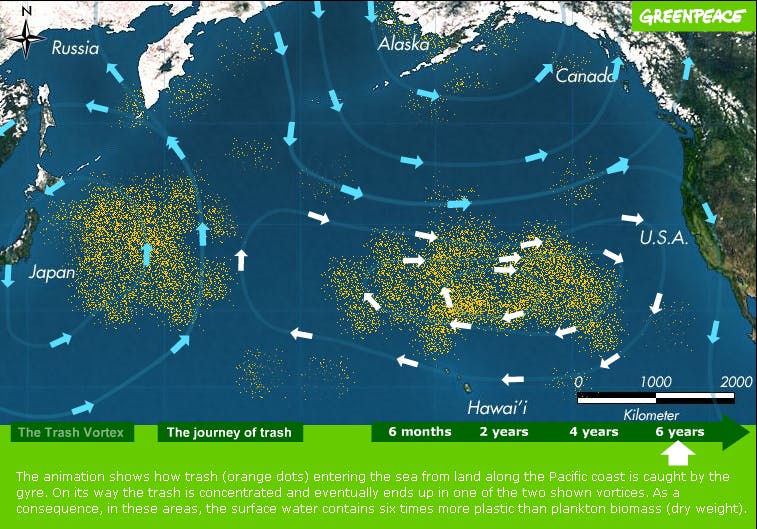 They said, “Some plastics in the gyre will not break down in the lifetimes of the grandchildren of the people who threw them away.”

Slat’s solution is to complement pollution prevention – done with awareness campaigns – with immediate action. His Ocean Cleanup Array will have a fixed manta ray-looking platform with long stretches of floating booms that will be positioned according to the gyre current, so that the flow of the water will bring in the plastic waste to the platform. From here, the collected trash can be recycled back on land.

He explained that using booms is better than nets, since it covers a wider expanse and prevents any by-catch or organism from getting caught. Plastic is simply transported along the boom, like a funnel, without any zooplankton accumulation.

In addition, since the station is stationary, there is the advantage of having no emissions. Slat said this platform will be self-supporting, using renewable energy from solar and waves. It will also be positioned in traffic-less waters to avoid shipping route issues. They are looking into a logistics formation with gaps between the booms, so as not to block any ship crossing.

Although there is no declared platform size yet, he noted that the array will be categorised as an ‘artificial island’ under the United Nations Convention on the Law of the Sea (UNCLOS).

On top of possibly cleaning up the trash circulating in the oceans’ gyres in five years, which is based on their natural rotational period with a degree of variability, the other compelling benefit to develop the array is its profitability, said Slat.

“According to current estimations – due to the plan’s unprecedented efficiency – recycling benefits would significantly outweigh the costs of executing the project,” he pointed out. He even suggested creating an ‘Ocean Plastics’ label to put value on the recycled or reused plastic in the market, thereby also increasing consumer awareness.

Still, Slat said, “We’ll need a combination of extraction from the oceans and prevention on land in order to succeed … We need to stress the importance of recycling, and reducing our consumption of plastic packaging.”