Some big firms are reining in emissions in line with the Paris Agreement, but most are not, according to a report from climate action monitoring group Transition Pathway Initiative. Meanwhile the International Energy Agency has warned that the coronavirus could disrupt investment in clean energy.

The world’s largest companies and heaviest polluters are falling behind on the urgent emissions reductions needed to limit global warming to 2°C in line with the Paris Agreement.

According to a new report by the asset owner-led corporate climate action monitoring group Transition Pathway Initiative (TPI), titled State of Transition 2020, eight in 10 of the world’s highest-emitting listed companies are not on track to meet the key goal of the Paris climate accord.

The accord, signed in 2015, determined that global warming must be capped at 2°C above pre-industrial levels to avoid the most damaging effects of climate change by drastically reducing greenhouse gas emissions.

Of the 238 energy, industrial and transport companies tracked in TPI’s report, which was compiled by Grantham Research Institute on Climate Change and the Environment and the London School of Economics, only 43 have emissions trajectories in line with limiting climate change to 2°C.

Some 29 per cent of the companies have improved their governance of climate-related risks, but 9 per cent have regressed. Across all sectors, average emissions intensity is falling by 1.9 per cent annually.

More than half (56 per cent) of the companies claim to support international climate efforts such as the Paris Agreement, but only 40 per cent of them have integrated climate change risk into their business strategies.

The worst-performing industries in TPI’s report are the least surprising. Oil and gas companies are not even on track to meet the emissions targets they have set for themselves, while the emissions of steel and cement companies that have set climate targets are actually rising.

The best-performing sectors are shipping and paper. 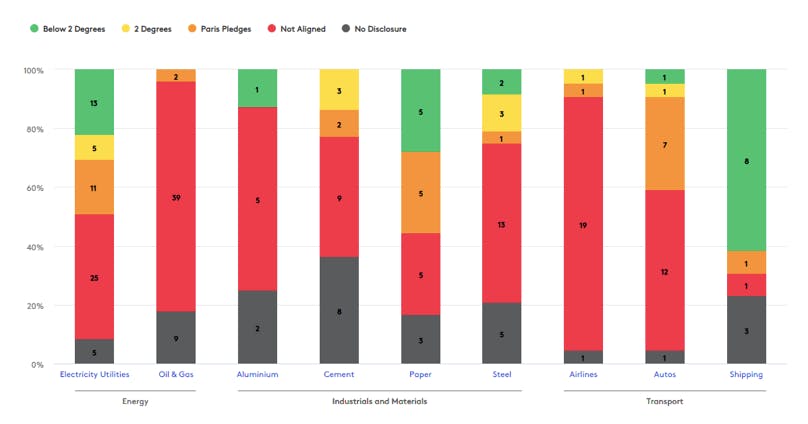 How the decarbonisation efforts of the world’s most polluting industries compare. CapSource: Transition Pathway Initiative

The most climate-ambitious companies in the report include consumer goods firm Unilever, mining giant BHP Billiton, Norwegian energy firm Equinor and German electricity firm E.On. Among the least concerned, which the report describes as “unprepared for the transition”, are chemicals giant DowDuPont and Russian oil company Rosneft.

The report emerges as the International Energy Agency (IEA) warned that the ongoing coronavirus pandemic may lead to a fall in global carbon emissions this year, the outbreak could hurt investments in renewable energy.

Faith Ward, co-chair of TPI, said: “It is of deep concern that so few companies were on the right path before the virus struck. Investors must now use their influence to ensure that climate commitments are not discarded in the face of financial pressures.”

Jonathan Bailey, head of ESG (environmental, social and governance) investing at asset management firm Neuberger Berman, commented that his company incorporates transition readiness into its proprietary ESG ratings. “We believe it is material to the financial performance of companies and will continue to engage companies on the topic,” he said.