5 ways to usher in a climate-friendly Chinese New Year

Can consumers do their part to curb climate change while observing traditions and ushering in good fortune this Lunar New Year? Businesses and environmental activists offer tips on how to achieve both aims.

More than a billion ethnic Chinese around the world begin celebrating the Chinese New Year, or Spring Festival, this Saturday.

The 15-day festival is marked by the consumption of copious amounts of food and drink, and many households take the opportunity to get rid of old possessions to make way for the new.

Besides marking the start of a brand new zodiac cycle, the coming Year of the Rat offers consumers the opportunity to begin new and less wasteful traditions that will help curb rising greenhouse gas emissions and temperatures.

Consumers also have the power to change business practices for the better, said Tylor Jong, co-founder of Treedots, a redistributor of surplus and imperfect food supplies in Asia. They could, for instance, push businesses to supply products that use sustainable farming methods, implement controls to reduce waste in the supply chain, or work with suppliers that compensate farmers and producers fairly.

“Consumers have a lot of power but they (are often not aware of) it because they think there is only so much an individual can do,” said Jong.

Eco-Business got businesses and activists to share some ways in which consumers can have a more sustainable Chinese New Year.

Our choice of what, where and even how we eat has a direct and huge impact on the environment as well as our health.

African swine fever has decimated China’s pig population in the past year and households have to contend with sharply higher prices or cut their consumption of pork this festive season.

The good news is that vegetarian and vegan food options are growing in Asian cities including Singapore, noted Coco Oan, founder of Singapore environmental group Project bECOme. This year’s Chinese New Year coincides with Veganuary, a campaign by a United Kingdom non-profit of the same name that encourages people to go vegan for the month of January.

More plant-based and cultured meat options are set to launch in the coming years.

While there is no word yet on Impossible Bak Kwa (barbecued pork slices), Impossible Foods did offer a taste of its plant-based Impossible Pork to visitors at the CES tech show in Las Vegas earlier this month.

Hong Kong cell-based seafood start-up Avant Meats is also developing products such as fish maw (swim bladders commonly used in Chinese soups) for the massive Asian market. The company held a public taste test of its lab-generated fish maw last year and its co-founder and chief executive Carrie Chan has said it hopes to produce the delicacy commercially in the next three to four years. 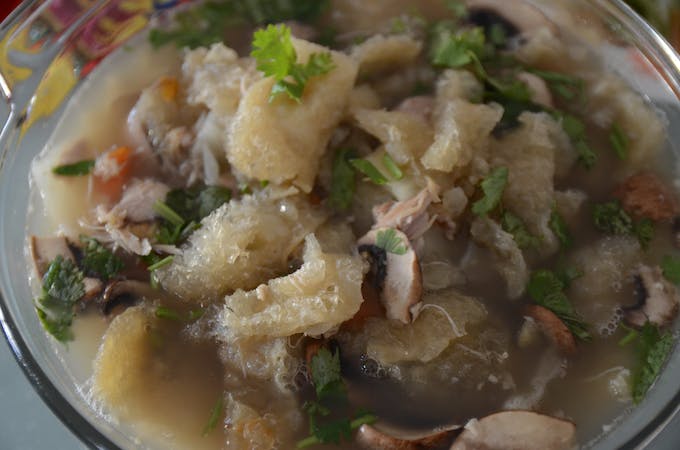 “Our choice of what, where and even how we eat has direct and huge impact on the environment as well as our health,” Chan told Eco-Business.

“Think about certain kinds of fish that are so popular that they are overfished (and the) carbon footprint of the supply chain, from the vessels going far into the oceans (to) cold storage, air freight, packaging, disposable utensils and food waste.”

According to the Environmental Investigation Agency, a campaign group, the demand for fish maw has threatened the population of a fish called the totoaba.

Cook just enough food for the number of guests that are heading to your home, and store leftovers in reusable containers in the refrigerator for another day, advised Joe Harvey who, together with his partner Carrie Yu, founded The Bulk House, a zero-waste online store in China that ships its products without plastic and almost zero packaging.

Home cooks can also opt for produce that is perfectly edible but that has been rejected due to cosmetic filtering, said Oan. In Singapore, Treedots (through its tie-up with community initiative Tingkats) and start-up Treatsure are options for households that want to help reduce food loss and waste.

Consumers should also avoid over-ordering when dining out with family and friends. “If everyone is having a nice time and has eaten enough food, there won’t be a 面子问题,” said Harvey, referring to the issue of “saving face”, or avoiding any embarrassment through practices such as feeding guests in excess.

Many homes stock up on goodies such as pineapple tarts and cashew nuts, and the containers for these treats pile up over the years and may end up as packaging waste. Consumers can ask bakeries if BYO (bringing their own containers) is an option, or if jars or plastic containers can be returned to the bakeries after use, said Oan.

This year, Project bECOme has signed on more than 10 bakeries in Singapore to its Circular CNY initiative, which will offer discounts to customers who BYO or return their cookie jars. The list of participating bakeries can be found at www.tinyurl.com/circularcny2020list.

Chinese New Year is also a prime period for large festive meals—which, in Singapore, invariably include the lo hei, or tossing of a salad with fish for prosperity. Organisers of such events can do their part to reduce disposable waste. Oan said they may request that their guests take along their own cutlery and lunchboxes, or rent reusable cutlery from their caterer or from a crockery rental business like Shinpuru Solutions.

4. Redefining what a “new” outfit means

The fashion industry generates about 10 per cent of the world’s greenhouse gas emissions. It is customary to wear a new set of clothes for Chinese New Year, but the tradition may have been more relevant in the past when people did not shop all year round, said The Bulk House’s Harvey.

“The key is to be creative and innovative in how you observe the tradition,” said Laura Francois, a sustainability and fashion expert.

“There is currently no effective way to recycle used textiles in Singapore and most charities are overflowing with donations of second-hand clothing,” she elaborated. Most garments thrown away will not be fully recycled, and therefore every new item purchased is material, energy and resources that cannot not be recuperated.

An item does not need to be brand new, to be new to you—swapping clothing with family and friends, or with the wider community at shops like The Fashion Pulpit in Singapore, make for easy ways to offset the environmental and social cost of obtaining new clothes, said Francois.

If you have the time, upcycling or repurposing of existing clothing is a fun activity to do as a family. Otherwise, adding a new accessory to your old outfit is a less harmful way of sprucing up a previous look.

5. Putting hongbao money to good use

Receiving hongbao from one’s elders is an age-old tradition during Chinese New Year. It is customary to obtain brand new bills as well as seek out decorative red packets, but the consequent waste is not ideal. Using apps like Paylah in Singapore and Alipay in China is a modern way to keep the tradition alive while minimising resources.

Those who have received a windfall, or who are looking to share their hongbao takings with others, can consider donating to an environmental cause.

While consumers can make a difference through their lifestyle choices, they can also support organisations that are doing crucial work like firefighting and advocating for policies such as fossil fuel divestment, noted Oan.