There are scientists who get numb to their subjects, but marine conservationist and PhD student Naomi Clark-Shen has never got used to the sight of unborn baby sharks. The avid wrestling, mapo tofu and Marilyn Manson fan shares a typical day in her working life.

Naomi Clark-Shen is a PhD student at James Cook University Singapore, where she studies the biology and ecology of small-bodied stingrays and sharks caught by fisheries in Southeast Asia. She is also a shark and ray consultant for World Wide Fund for Nature (WWF) Singapore, and is helping to develop local projects for the conservation group.

Her PhD topic stemmed from an independent research project devised with Kathy Xu, founder of conservation group The Dorsal Effect, at Singapore’s fishery ports. Over three years, data was collected from more than 17,500 animals, revealing significant trade in stingrays and small-bodied sharks: the often-forgotten elasmobranchs that few people know, or care about.

Many of these species — including Maculabatis gerrardi and M. macrura, which are sold as barbecued stingray in Singapore, a local delicacy — are highly threatened. Worried that their populations were plummeting unnoticed, Clark-Shen set out to learn more about them in the hope of contributing to plans for their conservation.

Here, Clark-Shen offers a glimpse into her typical working day in her lab at James Cook University, where she dissects sharks and rays to learn about their lives.

6am: My rescue bunny wakes us up around this time. She flips the carpet, tugs the blanket, or scratches the door, things she knows will annoy us and make us jump out of bed. We give her breakfast, tell her she is the best bunny in the world, and I go to catch the bus.

7:30am: I get to the university lab and haul the frozen sharks and stingrays out of the freezer and into a big bucket of water to defrost. These animals were incidentally caught by fisheries in Indonesia, Malaysia and Singapore, and a supplier generously passes them to me for research. The species I currently focus on are the Bluespotted maskray and Blackspot shark — two small species documented in high numbers at Singapore’s fishery ports which we know little about. While the animals defrost, I can drink my Kopi-C [coffee with sugar and evaporated milk, in local lingo] in peace and watch the latest wrestling highlights with no one around to judge whether I reply to emails. 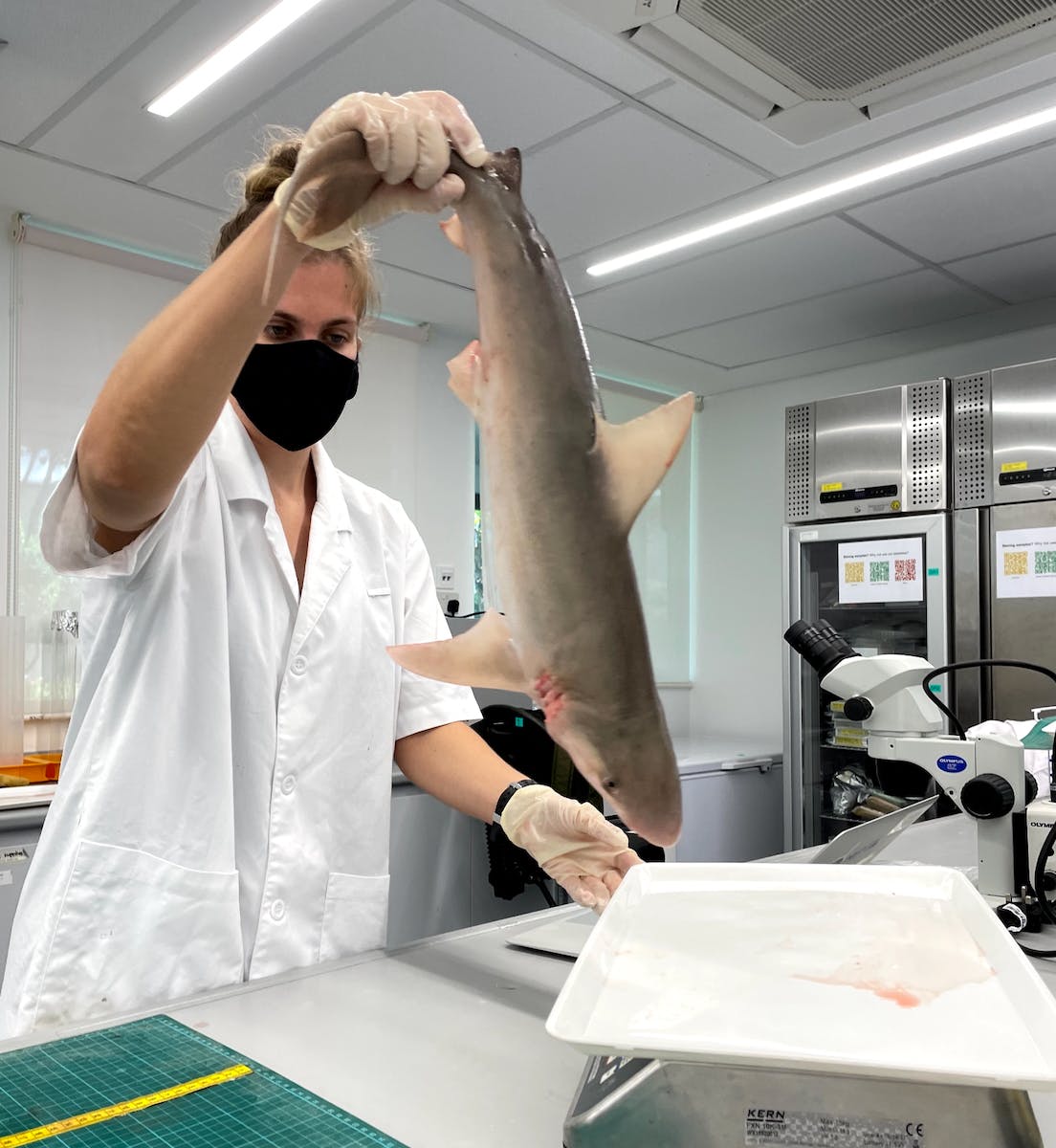 8.30am: In go my ear-phones and I play my favourite rock music (I am mostly listening to Marilyn Manson at the moment) that I am not allowed to play aloud in the lab. I weigh, measure, photograph and sex each shark and stingray. I open each animal up via their soft tummies and remove their stomachs, unborn babies, and vertebrae, which will help uncover their life stories. Their stomachs reveal what food they depend on and which habitats they live in; their unborn babies hint at how fast they reproduce; and the bands in their vertebrae tell us their age — much like a tree trunk. By the time I am done, the work area and my lab coat are awash with blood. They say you go numb to the brutalities you encounter in your work, yet I still feel immense sadness for the lives cut short and the babies never born. There is something particularly poignant about opening up their stomachs and seeing their last meal. 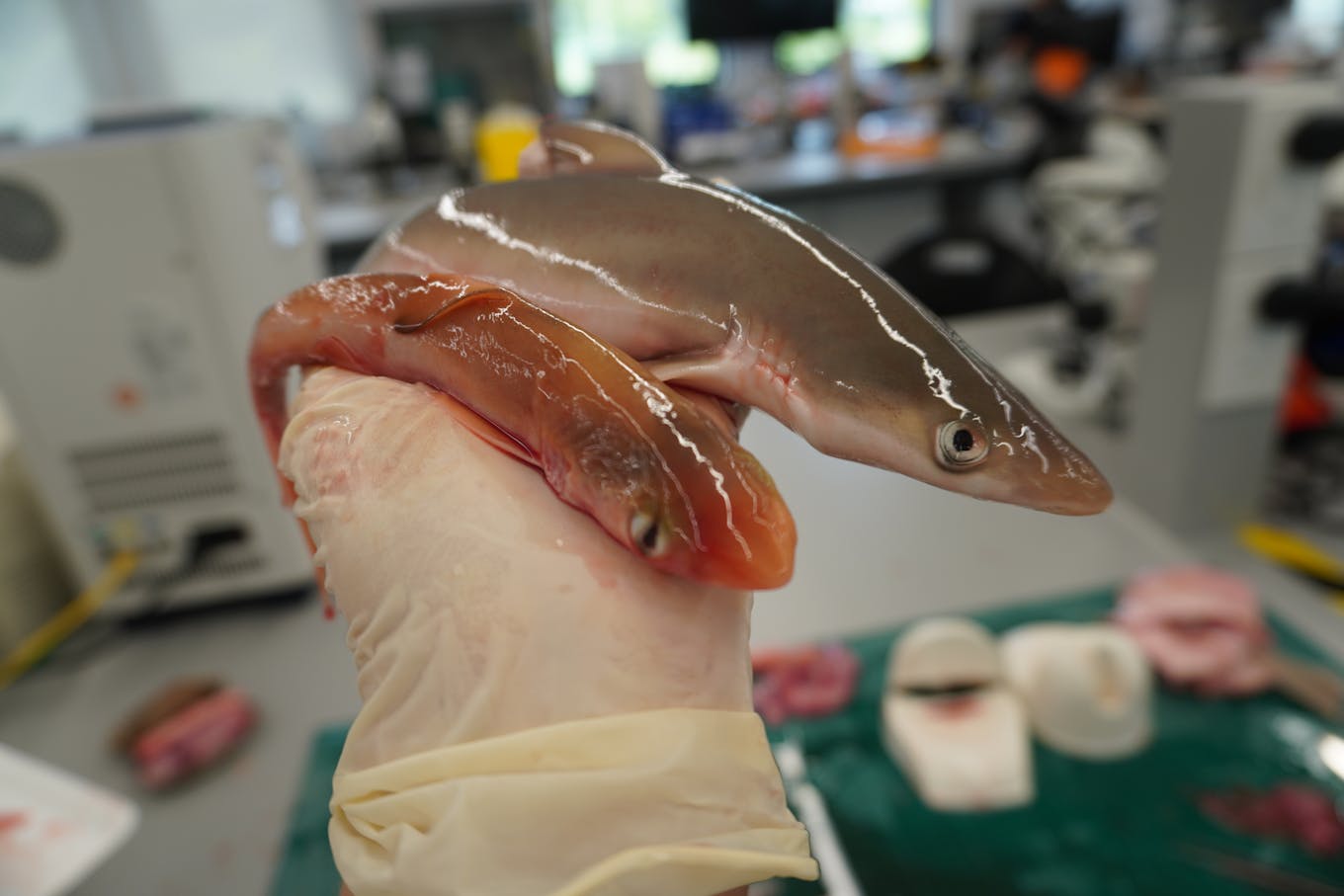 The dissections have revealed that the sharks produce only two pups at a time, and the stingrays only one — except for very big females which sometimes produce two. This isn’t very many, which makes them more vulnerable to fishing pressure. Most of the stingrays have bellies full of small prawns and marine worms. The sharks have a preference for fish, squid and octopus. All of these prey animals are heavily consumed by humans too, so to protect sharks and rays properly and make sure they do not go hungry, we need to safeguard their prey from us — the scariest predators on Earth. 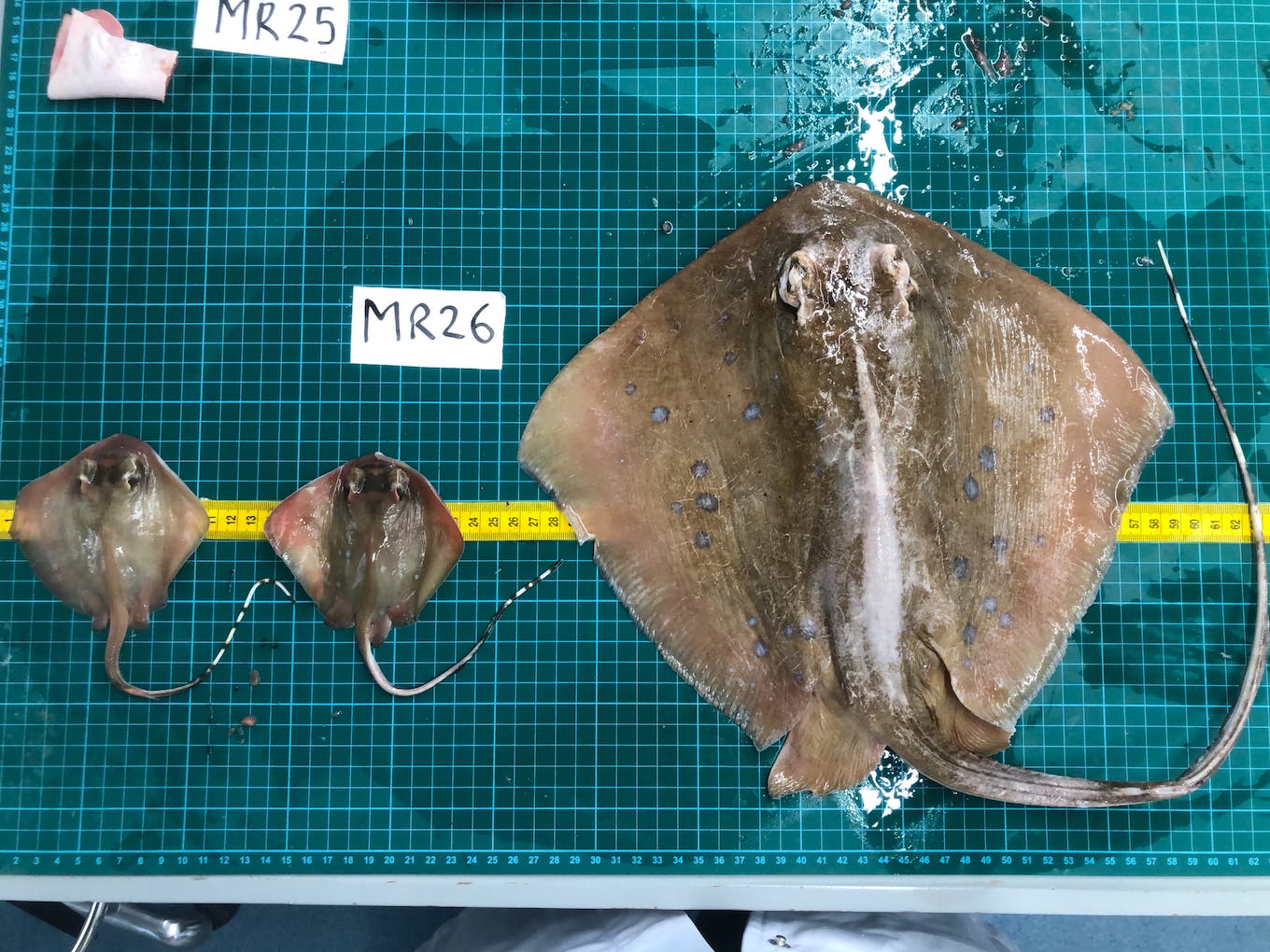 12pm: We rally people from the lab to makan [eat, in Malay language] together. I have been vegetarian since childhood, and my favourite meal from the canteen is mapo tofu with rice [a traditional Sichuan dish where tofu is set in spicy sauce].  A life-goal was achieved when, before even reaching the counter, the staff had keyed in ‘1 x mapo tofu with rice’ and called the order to the kitchen.

1pm: Back to the lab to age some sharks and stingrays. I take the vertebrae of the animals and cut them into small sections, bleach them, oven-dry them, and then stick them onto microscope slides with glue. Using sandpaper I grind them down so only a very thin mid-section remains. I pop this under a microscope, twiddle with the lighting and focus, and the age bands appear — one band for each year the animal has lived. The oldest stingray I have encountered was 11 years old, and the oldest shark was seven years old. By correlating their age with their length and reproductive status, we can understand when they reach maturity, which can be used for conservation plans; for example, we can ask fishermen to release females above a certain size because they are old enough to reproduce. 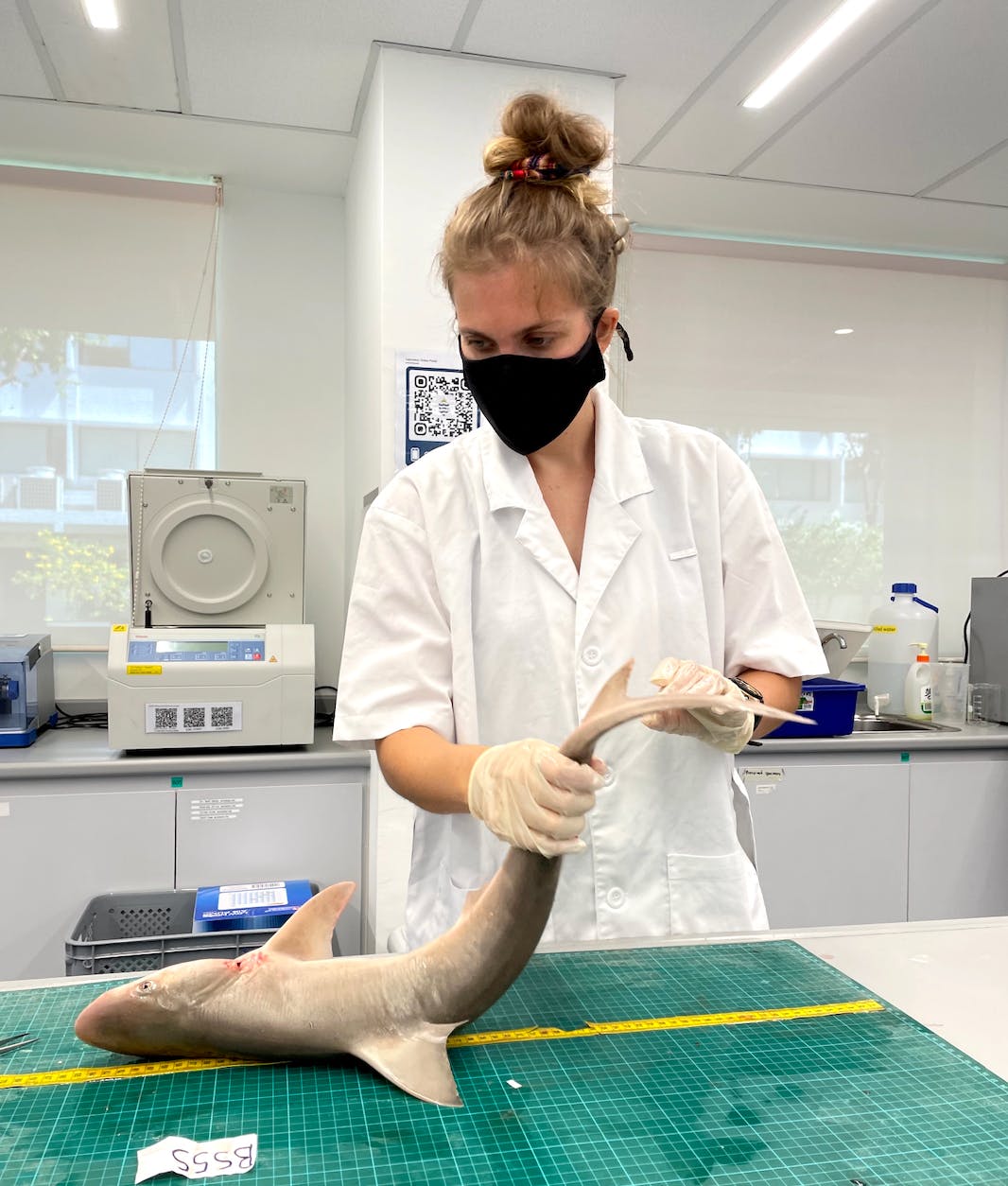 3:30pm: I announce my departure to go home, and am met with the usual mutterings of “What? So early!?”, at which point I remind my colleagues that I arrived at 7:30am. If I haven’t exercised in the morning, I might squeeze in a gym class. Fitness is my main hobby (after animals and mapo tofu). Powerlifting, running, cycling, and wrestling are also among my favourites.

5pm: Exhausted and happy to be home with my partner, who is conveniently a fantastic cook. Dinner, television, and cuddles with the demanding bunny. Unfortunately, the nocturnal rescue hamster wakes up just as I want to sleep, so we let him run around the bedroom for a while.

9pm: I dip into a horror book and am soon fast asleep and having nightmares.

3am: I wake up. I lie frozen in bed, too scared to move. Not sure why I still read horror books, really.